Caustic wit is my religion.

There’s probably a version of Can You Ever Forgive Me? – perhaps even one starring Melissa McCarthy and Richard E Grant – that’s more lightweight and less ruminative, emphasising the hoodwinking hijinks and hilarity over the alcoholism and despair. Not that Marielle Heller’s is a depressing film – it’s frequently very funny – but it’s undeniably an inward looking one, which may explain why material with in-built potential for reaching a wider audience failed to make a splash.

The story of a down-on-her luck author turns forger who becomes something of a cause célèbre, Can You Ever Forgive Me? did garner three well deserved Oscar nominations, though: Best Actress for McCarthy, Best Supporting Actor for Grant and Best Adapted Screenplay (Nicole Holofcener and Jeff Whitty, from Lee Israel’s autobiographical book of the same name). And if it went home empty handed, Grant certainly made the most of the awards-circuit tour without seeming like he was cynically touting for business.

He’s in prime REG mode here, boisterous, energetic, full of vim and scabrous wit as Lee’s gregarious gay friend and co-conspirator Jack Hock. Hock’s enormously likeable, itinerant, yet somehow getting by as long as he has on his charm and essential eccentric Englishness. REG hasn’t often been granted roles that make the most of his idiosyncratic skillset – the last was probably Dom Hemingway – but when he’s cast to his strengths, as here, he’s in another league. It isn’t for nothing that the performance has been compared to his star-making turn as Withnail, as there’s a common relish in seeking to shock filtered through an underlying pathos.

This is McCarthy’s movie, though and she effortlessly and unshowily adjusts to the demands of straight drama. One might point to Lee’s acid wit as a crutch that ensures McCarthy doesn’t venture into such potentially treacherous territory unaided, but really, there’s no sense at all of her relying on schtick or familiar quirks and ticks.

McCarthy fully inhabits Lee, a self-destructive, booze-fuelled loner who does her best to be her own worst enemy. Israel’s never less than a prickly customer, but also strangely sympathetic in her persistent self-sabotage. Part of that is the classic trait of an individual who is cleverer and funnier than anyone else, even or especially if they aren’t recognised for it; when she resorts to criminality as a means to dig herself out of a hole of debt and potential destitution, we can only cheer her on.

Particularly as – even if Jack doesn’t really recognise it, and she’s wont to over-inflate the art of her actions at the expense of the illegality – what she’s doing takes significant creative skill, and her victims are offscreen folks with more money than sense (of course, once her subterfuge crashes down around her, it really does crash. But even then, her forgeries were still being taken as bona fide a decade-and-a-half later, at least in first-edition form).

I only recently read how Julianne Moore was originally been cast as Lee, complete with fake nose and fat suit, and that Holofcener, then the director, fired her before falling out of the project herself. It eventually reassembled with Heller (whose Diary of a Teenage Girl is also marked out by a very particular wit, albeit with a much more striking colour palette and visual style). Ironically, since he seems to be responsible for every other McCarthy movie being a stinker, Ben Falcone– an actor-director and crucially her hubby – presumably brought it to her attention, as he’d already been cast in the Holofcener iteration (he’s Alan Schmidt in the film).

If Heller’s film has a flaw, it’s that you don’t really get a sense of how sustained Lee’s period of ill-gotten success was; the excerpt from her novel at the end, for example, suggests Jack was selling her work for quite a long spell, yet it barely takes up any time in the movie. Can You Ever Forgive Me? seems to be biding time until Lee’s discovery; no sooner is she a success than retribution comes to pass. That may partly be because you want to spend more time with this duo and enjoy their dubious behaviour – old enough to know better and behaving disgracefully – more fully.

Neither does Can You Ever Forgive Me? really engage with the essence or ethos of the practice of forgery – certainly not in the delightful manner of Orson Welles’ F for Fake – aside from the odd aside about “who authenticates the authenticator” and Lee’s assertion that “I’ll have you know I’m a better Dorothy Parker than Dorothy Parker”. But that part is understandable; while the underlying scheme itself is fascinating, this is principally a character study, and an admirably rounded one.

It’s to Heller’s credit that scenes that would have been overplayed or overcooked by someone with less sure a hand – Lee’s dinner date with a bookseller admirer/budding writer; her contrite court confession – play out affectingly. The same with the final meeting between Lee and Jack, allowing for emotion but not at the expense of mutual abuse. Lee pieces her life back together – she gets to write a book, which wasn’t published until 2008, and a new cat – but Heller has the wisdom to make this measured (and as the court confession suggests, she retained an evident pride in her illicit achievements).

In its own low-key, unobtrusive way, this offers a classic morality tale – Lee is punished for her duplicity, Jack for his profligacy – but the twist is that neither is chastened by the behaviour for which they’re brought to account. Can You Ever Forgive Me? is one of last year’s most satisfying films, and one of its best performed. Hopefully, home viewing will find it the wider audience it deserves. 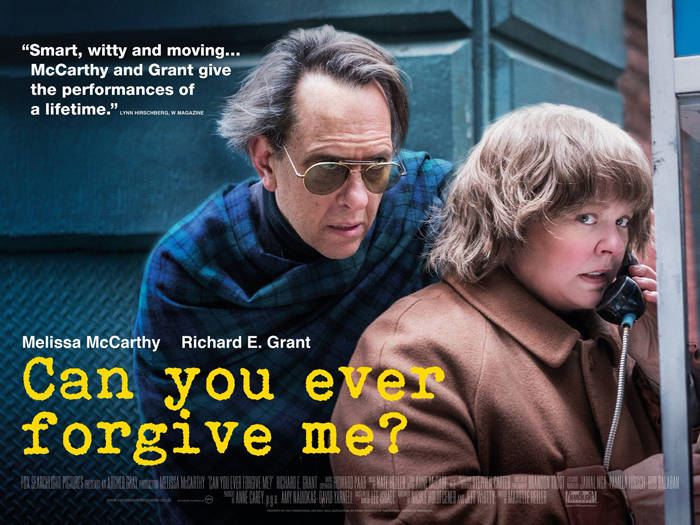 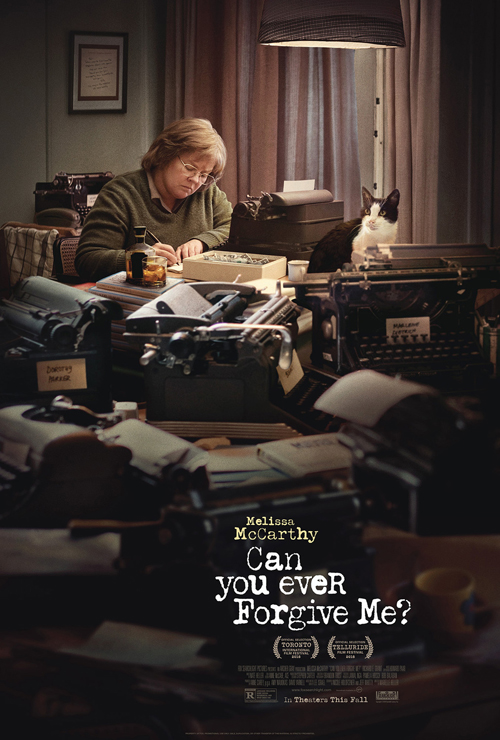