We’re looking for a bug no one’s seen before. Some kind of smart bug.

Paul Verhoeven’s sci-fi trio of Robocop, Total Recall and Starship Troopers are frequently claimed to be unrivalled in their genre, but it’s really only the first of them that entirely attains that rarefied level. Discussion and praise of Starship Troopers are generally prefaced by noting that great swathes of people – including critics and cast members – were too stupid to realise it was a satire. This is a bit of a Fight Club one, certainly for anyone from the UK – Verhoeven commented “The English got it though. I remember coming out of Heathrow and seeing the posters, which were great. They were just stupid lines about war from the movie. I thought, ‘Finally someone knows how to promote this.’” – who needed no kind of steer to recognise what the director was doing. And what he does, he does splendidly, even if, at times, he can’t quite entirely sustain a 129-minute movie. Since, while both camp and OTT, Starship Troopers is simultaneously required to maintain its composure and straight face throughout.

Rasczak: Naked force has resolved more issues throughout history than any other factor.

Because Troopers does rather make its point quite early on, in very funny, sledgehammer ways. And then proceeds to continue making it. Is your film a better film if it can make the audience care about the characters and throw in razor sharp satire, or if you’re simply expected to see the entire thing as a coruscating joke?

It needn’t be one or the other, necessarily, but your tools are closer to those of outright comedy if the latter, where it’s generally recognised that one shouldn’t outstay one’s welcome. Slant magazine called it “one of the greatest of all anti-imperialist films” that is sure to “push every element to breaking point without caving to the lazy lure of ridicule”, except that, while it isn’t out-and-out a Police Academy or The Naked Gun, the level of parody does engender distancing, while still attempting to be nominally propelled by character

Of which, there’s no one to identify with; this is at its most patience-testing when we have to run through main cast’s romantic tribulations. Sure, it’s all satire, but that doesn’t mean it’s all equally adroit. Troopers treads a delicate line, and one, on balance, I don’t think is quite as satisfying as Robocop, because it only allows for the one level response. Not that the level itself isn’t frequently very funny.

Mrs Rico: I hope you don’t ruin your life over some silly little girl who wants to look handsome in a uniform.

Verhoeven’s very clear that Johnny Rico (Casper von Dien) is a privileged idiot: “Johnny, people get killed in the Federal Service” plead his parents; “Statistically speaking, you should have accidentally guessed right by now” says Neil Patrick Harris’ Carl, exasperated by his friend’s lack of psychic ability. He believes every fascistic statement his tutor (Michael Ironside’s armless Rasczak) feeds him, yet is still ultimately guided into service by sex; he wants Denise Richards’ plastic, erotically dilated Carmen, who is out of his league, while Dina Meyer’s Dizzy in turn harbours not so secret passion for him to the extent that when she dies “It’s alright, because I got to have you” (the only logic I can perceive for Johnny largely ignoring her is that he doesn’t like gingers).

This is the basic dynamic supposed to see us through. And indeed, the fact-of-life militarism is almost incidental to their romantic pursuits or career achievements, with Carl on the fringes, identified as all mind and sexually disinterested (and further identified later by his SS-style overcoat and cap, clearly earmarking the view taken of military intelligence). It’s curious, then, that the director’s justification for the shower scene “The idea I wanted to express was that these so-called advanced people are without libido… It is sublimated because they are fascists” is somewhat countered by sex being all the main characters are thinking about. Paul the dirty old Dutchman?

Rico: Infantry, sir.
One-armed, legless Recruitment Officer: Good for you. Mobile infantry made me the man I am today.

My own experience of the picture is that, whenever I revisit it, I’m waiting for the Riefenstahl propaganda videos to tickle me, or the outrageously unself-aware statements and observations. But the result is that there are points where I’m left feeling a little listless, conscious of how Robocop might be, were there no human story between the jabs. Or if the lead character had been played by someone less impressive than Peter Weller. Instead, I usually find the gap is filled by fascination with knowing most of the performances are entirely unknowing. You can see with the likes of Doogie and Ironside that they’re at least partially aware that what you see isn’t what you get, but everyone else is so earnest, you fear for their wellbeing.

Verhoeven said “it’s a very right-wing book. And with the movie we tried, and I think at least partially succeeded, in commenting on that at the same time. It could be eat your cake and have it. All the way through we were fighting with the fascism, the ultra-militarism. All the way through I wanted the audience to be asking, ‘Are these people crazy?’” Which is great, except that it’s pretty clear the answer is yes from the moment “INVASION!” flashes up on a news report (“It’s an ugly planet, a bug planet!”). As Verhoeven says, “we tried” and I think he succeeds, up to a point.

Rico: My mom was right about you. You look great in a uniform.
Carmen: You look pretty great yourself.

Verhoeven saw the military of the movie as a direct representation of the US, whereas screenwriter Ed Neumeier felt its themes were more universal. Certainly, it can’t be a coincidence that, while our “heroes” come from Buenos Ares, they embody the stereotype of vacuous body-beautiful Californians (“the Worship of Aryan body” as Verhoeven put it). Indeed, von Dien’s performance is so square-jawed cheesy, it’s hard to believe he was oblivious to the parody he was playing (and presumably still is, in the many sequels).

Interviewee: The only good bug is a dead bug!

The visual propaganda film vignettes are a very direct continuation of the Robocop style, of the accepted, overtly fascist framework as a creeping extension of today’s: “A world that works” with kids eagerly crowding round citizens to play with their guns; “Crime and punishment” in which there’s a one day turnaround in sentencing, with a broadcast execution that evening; best of all, a “Do your part” film, in which children stomp on roaches as an over-effusive mother applauds them.

The depiction of the military is just heightened enough (meaning, not that much). Hilariously, Clancy Brown’s career sergeant spends most of basic training maiming his recruits (“Pain is in your mind!”), with subsequent dialogue such as “Fresh meat for the grinder, eh?”, “Rico, I need a corporal. You’re it until your dead. Or I find somebody better”, “Rico. You kill bugs good”. It’s Full Metal Jacket played as farce (at one point, Johnny uses a football move to win against the “enemy”, leading to his being made squad leader)

Expert: Brain bugs? Frankly, I find the idea of a bug that thinks offensive!

And then there’s the enemy. It would be easy to regard Verhoeven’s movie as a prescient prediction of the War on Terror: happening a great distance away; waged against a populace with whom there’s complete empathic disassociation (they’re not even human); for the purposes of attaining power (colonisation or oil, take your pick); it’s even possible the asteroid strike on Buenos Aires is a false flag (how exactly the bugs are supposed to have achieved the hit is never elaborated on, while it’s self-evident what it achieved in terms of rousing the Earth population).

But the visual cues are straight out of the days of the Empire, with the Zulu-style outpost only really distinguishing itself by the number of gratuitously dismembered corpses displayed. One might equally apply many of the signal points to World War II.

Rasczak: They sucked his brains out.

Like the War on Terror too, there is no end. We’re promised “Once we understand the bugs, we will defeat them!” (this coming through publicly broadcast torture methods, amusingly censored for the squeamish), but the military-industrial complex’s appetite knows no bounds. Just as long as we continue to give credence to the self-evident threat, it will continue to muster support.

The bug (Arachnid) effects work in the movie, courtesy of Rob Bottin, stands up as well as the dinosaurs in the original Jurassic Park. It ought to, as the picture came in with a price tag of more than $105m; it made only $15m more than that worldwide. Which means this is one of those curiosities that slipped by, greenlit by execs thinking (presumably) they were getting another Total Recall when, in fact, it was closer to Showgirls in terms of blindsiding them.

So Starship Troopers is just shy of getting full marks. It isn’t quite the masterpiece Robocop is. I probably thought it was initially (I saw it twice on the big screen, the second outdoors at Glastonbury Festival). It’s a very clever movie, and the relish Verhoeven and Neumeier take in presenting their little fascists and ripping them apart is irresistible. But it’s also an essentially one-joke movie, and one that might have been even more effective and more shocking had it been shorter and sharper. 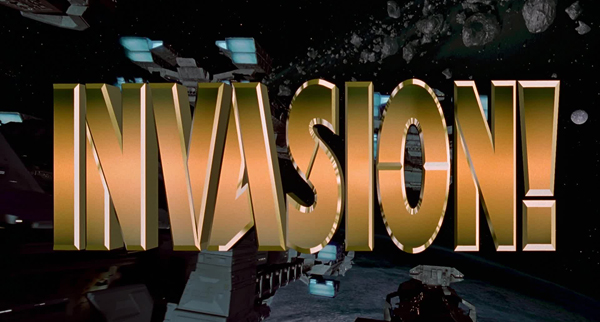 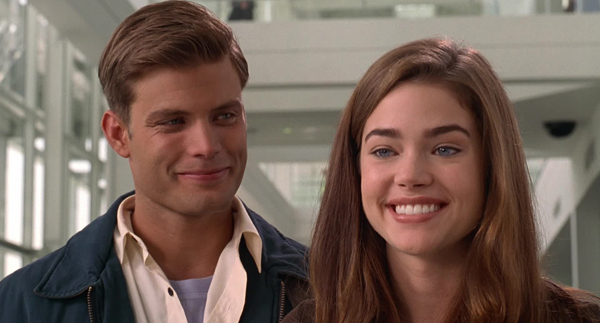 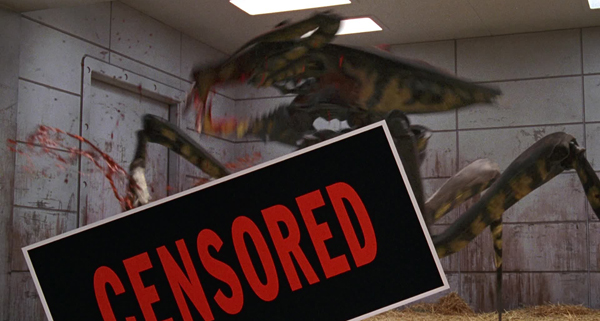 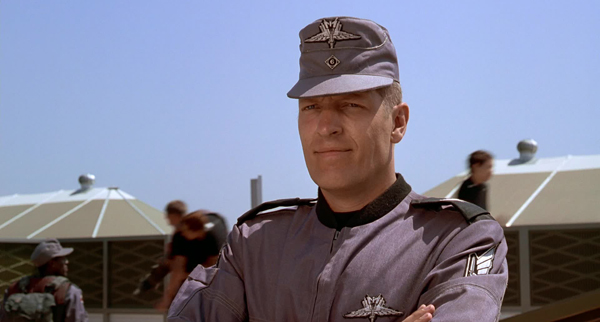 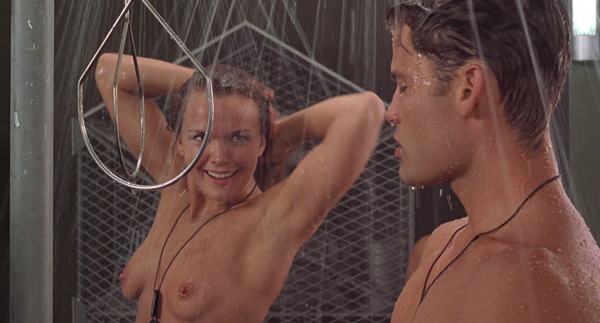 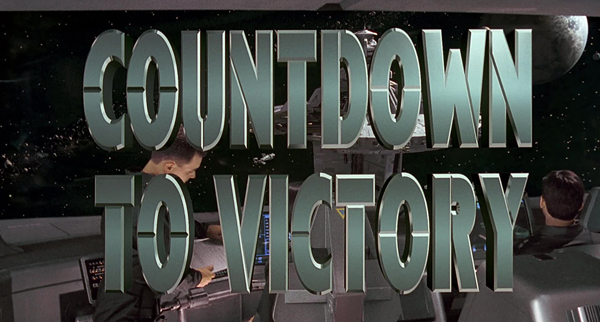 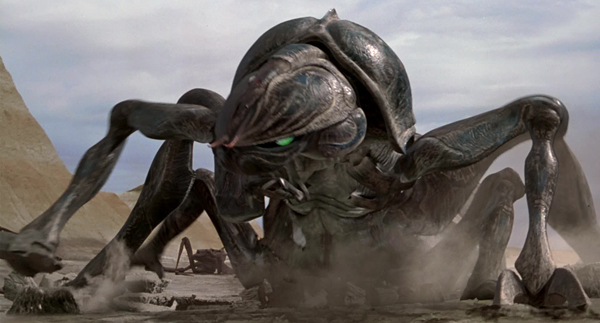 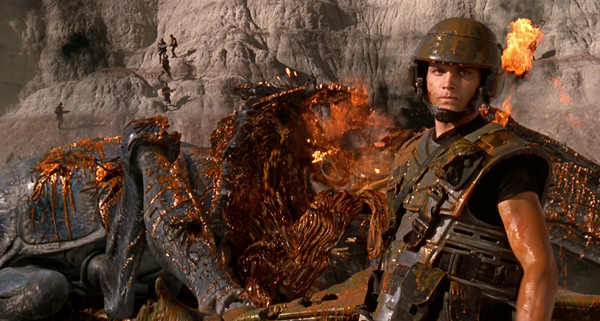 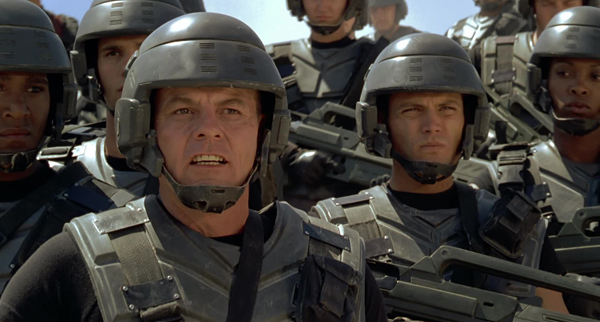 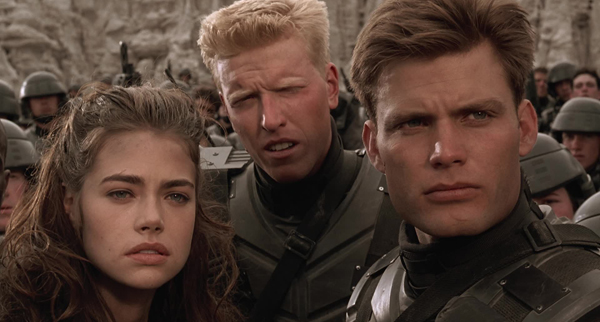 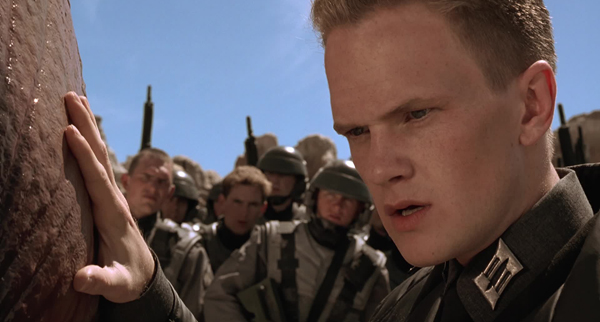 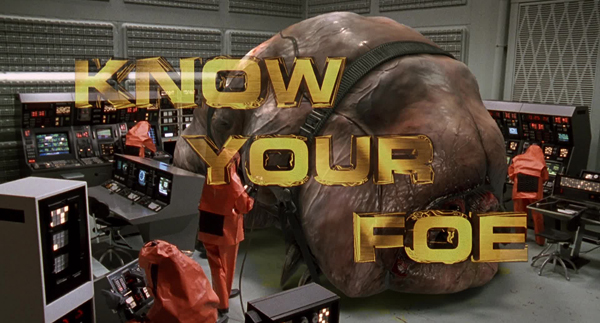