Something of a high-concept doodle, based on Terry Johnson’s play, a “What if?” confection in which leading lights of their particular fields converging on a 1954 New York hotel. Johnson’s intent was to draw attention to the disparity between these figures’ public personas and their actual selves; Roeg’s attraction to the material was on a more general level, a personal realisation that “Good God, nobody knows a damn thing about anyone“.

I’m not sure how successfully Insignificance actually gets to grips with that idea, and I’m not sure, despite the bits and pieces of expansion Roeg massages, that it ever really becomes more than a (very well filmed) play. Nevertheless, by virtue of the director’s imprimatur, the Insignificance still evidences the fascinating thematic and textural qualities explored throughout his career.

The Actress (Theresa Russell as Marilyn Monroe), the Professor (Michael Emil as Albert Einstein), the Ballplayer (Gary Busey as Joe DiMaggio) and the Senator (Tony Curtis as Joe McCarthy) are, in one respect, straightforward archetypes (representing respectively sex, smarts, athleticism and power). But they also possess just enough humorous subversion to justify the exercise. According to Variety, the characters, “for legal reasons are not specifically named“, but it’s a cuter device not to anyway.

Roeg employs flashbacks to illustrate their individual key fears, but it’s only really the unlikely relationship between Einstein and Monroe that ignites a spark in the writing, including the film’s most famous scene, where Marilyn illustrates the theory of relativity with the aid of a toy train and a balloon.

The Professor: In my lifetime of experiences, the Swiss authorities called me a German fascist, this regarding that I’m Jewish. But you delicately alluded to that a moment ago. And, in Germany, by the German fascists, because I was Jewish, I was called a Zionist conspirator. I come to democratic America, some small-minded people called me a German fascist and Zionist conspirator. And now I presume that you are suggesting that I’m a Soviet communist. Well listen, two weeks ago, two magazines at the same time variously called me a warmonger and a conscientious objector… in the review of the same speech… And… it’s unbelievable.

Indeed, the performances of Emile and Russell are the most memorable, the former offering a witty, likeable, befuddled interpretation of Einstein, given a rush of giddy gusto by Marilyn’s intrusion on his world. Einstein is haunted by the horror of Hiroshima and the culpability of his work and of science, which Marilyn coaxes out of him. One might regard this as an obvious and slightly trite choice, but it allows Roeg to break out his patented box of editing tricks, Einstein continually seeing an apocalyptically stopped clock, and the hotel room finally erupting in a nuclear inferno that, as Marilyn goes up with it, recalls the incineration of Gene Hackman in Roeg’s prior film Eureka.

The Senator: That’s astounding. I mean, you could be the spitting image.
The Actress: I know, if I were eight years younger and took better care of myself.

Russell – who was approached for the project before her then husband agreed to direct – doesn’t offer a particularly indelible version of Marilyn. But slavishly attempting to copy her would rather defeat the point, which is that she does offer an affecting rendition of someone aware of the disparities between appearance and reality (“I mean, what the hell. It’s not me you want, it’s her” she says at one point of McCarthy’s attentions). I’ve seen it said she (or Johnson) gets the explanation for the theory of relativity wrong, but even that might fit with Einstein’s example of the Moon being made of sand, not cheese (“I only said I knew because you knew” confesses Marilyn – “Knowledge isn’t truth, it’s just mindless agreement” comes the response).

Busey’s blockhead DiMagio is all but irrelevant, becoming jealous over his wife and forcing a confrontation in which he has to acknowledge it’s over between them; by this point, the “Have a couple of kids” solution to troubles has been viciously ended by McCarthy punching her in the stomach and causing a miscarriage.

It’s an interesting performance from Curtis, whom Roeg attested was great to work with, playing down the Machiavellian side for slightly banal manipulation amid the expected touchstones of delusional thinking (“The whole war was based on a Soviet plot“) and the seedy cliché of the hypocritical politician (paying for a hooker dressed as Monroe).

Does the picture ever shake off the broader perceptions of the characters to explore stronger truths? Not really. It flirts with them, but ultimately leaves them intact; when Einstein expresses his fears over (further) use of the bomb, Monroe naively responds that she doesn’t think they will.*

And where does Will Sampson’s Cherokee elevator attendant stand in this, other than as an example of the “wise native”? It’s unclear, except to reveal, during a rooftop foray, that he continues to observe his tribal traditions even in the midst of an alien, hermetic environment. Perhaps everyone is, in fact, who they are assumed to be at first glance? Or perhaps Sampson is there to offer a counterpoint; he has no need for veneer or artificial personas.

Einstein’s latest work is a set of calculations that come close to describing space-time. The senator is having none of it as “I’ve come to the conclusion that the shape of space-time is of no fucking importance. It’s just paper“. There is an after-taste of “It’s just…” about Insignificance, that it’s self-consciousness with regard to what it is and who its portraying is innately limiting, and that our responses to it will rely on how fascinating we find these archetypes in the first place. As a consequence, the film stands as little more than a curio.

One might even see it as drawing a line under the recently deceased director’s career, after a decade-and-a-half long run of classics (Eureka is at least half a classic); after that, he would flirt with greatness again, but the difficulty of getting projects off the ground resulted in a tendency to unevenness. I lean to thinking Roeg’s pictures’ mark of quality is how fully immersed in his vision one becomes, which I suppose, in turn, is an indicator of how complete they are unto themselves. In the case of Insignificance, one senses it has never fully decided to be a Nic Roeg film.

*Addendum 02/08/22: Monroe might be taken as the wise fool here, perceiving the greater reality. They won’t use the bomb again because they didn’t/couldn’t in the first place. She’s appears to explain the theory of relativity, but the reality is, it’s nonsense. 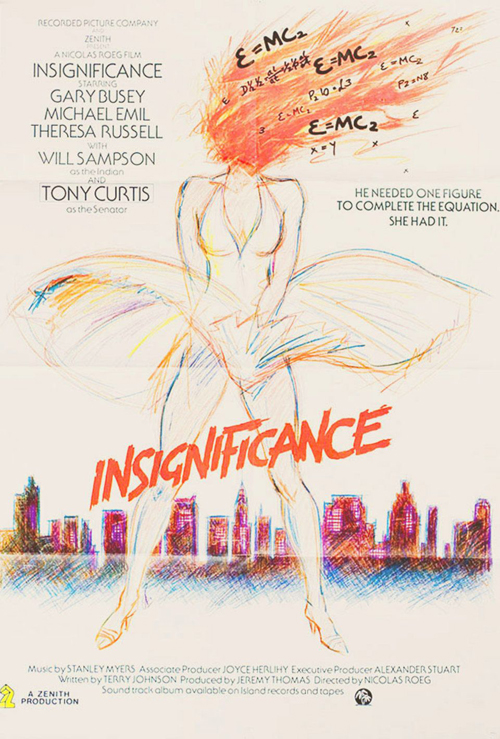