I think we’re in china, so to speak.

This 54-years-later sequel has to be admired for its dedication to replicating the look and flavour of the beloved Julie Andrews original, and it gets several elements very right – most importantly the recasting of the title role – but the side-effect of such devotion is that its comparative deficiencies are unflatteringly laid bare for all to see.

Most particularly, the songs. They don’t outright suck, but only one of them is remotely memorable, and you need them to be, if you’re to make the all-too wholesome medicine go down. The other biggie is Rob Marshall, the choreographer who rose to the status of sought-after Hollywood director while exhibiting negligible discernible talent in the field. He’s certainly no Bob Fosse.

Indeed, Marshall’s foursquare direction is only remarkable for how pervasively unremarkable it is. Any point where Mary Poppins Returns might potentially take off (and characters do so quite consistently), he’s there reigning in any flight in by treating the whole endeavour as if its bound by the limitations of the stage. Which isn’t him diligently adopting the approach of 1964; he’s always been this uninspired.

As such, that the picture is as watchable as it is, and even approaches a measure of dramatic engagement during the final half hour or so, can’t really be attributed to his (lack of) efforts. Rather, the stop-start listlessness that characterises the first hour is exactly the flavour you’d expect.

Notably, to get this made, Disney had to wait until PL Travers was no longer alive and objecting to a sequel (she hadn’t liked the first movie, and rejected a proposed follow up both subsequent to its release and twenty years later, when Jeffrey Katzenberg floated the idea again… his being much along the lines of the one we’ve got). Ruthless Mouse House cutthroats who’d trample over someone’s dying wishes (her will didn’t explicitly say a sequel wasn’t to be made, despite some sources stating otherwise, but it’s pretty certain she’d have vetoed it if still alive)? Never. Just watch Saving Mr. Banks to get their sanitised, official version of Travers for evidence.

There are nods to her novels – Mary returns attached to a kite, per first sequel Mary Poppins Comes Back – but Mary Poppins Returns focusses on Michael’s trio of kids requiring a super nanny’s sure touch this time, along with her restoring bereaved dad (Ben Whishaw) with his lost brio and joy. Oh, and matchmaking for sister Jane (Emily Mortimer) with Dick van Dyke substitute Jack (Lin-Manuel Miranda).

All fairly straightforward then, even more so through signposting the solution to the Banks’ financial woes almost immediately (some elusive inherited shares in the bank where Michael: only in something written expressly for kids, as they’re little monkeys and won’t notice goes the thinking, would you have the head of the household ignoring an obvious financial solution for a whole year, leading to the imminent disenfranchisement of his children).

I suppose, yes, the deus ex van Dyke of the final scene – not that the nanny isn’t one floating finger-snapping Mary ex machina herself – provides the actual solution, since he made some investments on Michael’s behalf, but none of it is very edge-of-the-seat.

The closest we come is a turn-back-the-clock sequence, as Jack scales Big Ben to prevent arch rotter Colin Firth from snatching the house away at midnight. Which ultimately comes to nowt, as Mary has to intervene (one might ask why she didn’t just do that in the first place, but I guess nannies works in mysterious ways).

The best sequence, though, is the embrace of original-evoking traditional animation, whereby Mary and Jack accompany the kids into an antique china bowl, complete with Firth voicing a nefarious, kidnapping wolf. Another underwater number is much less successful, and suggests Marshall would have been wise to consult James Wan about simulating sub-aqua moves.

The best song, meanwhile – as noted, there aren’t many contenders – is the leerie-infused Trip a Little Light Fantastic. And while the choreography throughout is fine, without the accompanying camera creativity, it isn’t as memorable as it ought to be.

It’s fortunate then, that with Blunt and Miranda as leads, the picture instils a lot of goodwill straight off the bat. Blunt is perfect, very proper, mischievous with a straight face, and appealingly vain; I can’t say I was ever Julie Andrews’ greatest fan, so her lack of a cameo didn’t leave me wanting. I could have done without Angela Lansbury too, to be honest (although, I have to admit she still has a fair set of pipes). Van Dyke gets a free pass, obviously, and it’s impressive to see his knees still function. David Warner’s returning Admiral Boom is an extended side gag that consistently fails to land, alas.

Miranda is suitably chirpy, and his mockney sufficiently amiable, if understandably less absurd than Van Dyke’s was. Firth’s villainy has a certain clipped relish. Julie Walters plays exactly the same part she’s been playing for the past twenty years, while Meryl Streep appears because she’s contracted to appear in all movies from now until the end of time.

As for grownup Michael and Jane, Mortimer is hugely appealing, but unfortunately Whishaw delivers a rare bust. He’s either wretchedly maudlin or obnoxiously authoritarian, and so unable to elicit a through line of empathy for his predicament. Even at the end, when he comes over all jubilant, it feels inauthentic; alas, he’s no David Tomlinson when it comes to essaying the passage from uptight to relaxed. The kids are fine for the most part, although I nearly broke ranks and fled for the exit when moppet Georgie (Joel Dawson) launched into a heartfelt solo.

The buzz surrounding this sequel suggested it would break the bank, some even projecting a Best Picture Oscar nomination, but I can’t see either of those things happening (albeit, it may have the legs do respectably at the box office). Mary Poppins Returns is overlong and sloppily paced, without the songs to do its performers justice. It isn’t a problem that it’s trying so hard evoke the innocent Disney vibe of yesteryear – I can’t remember the last time I went to see a U certificate – but rather, that it isn’t trying hard enough elsewhere. 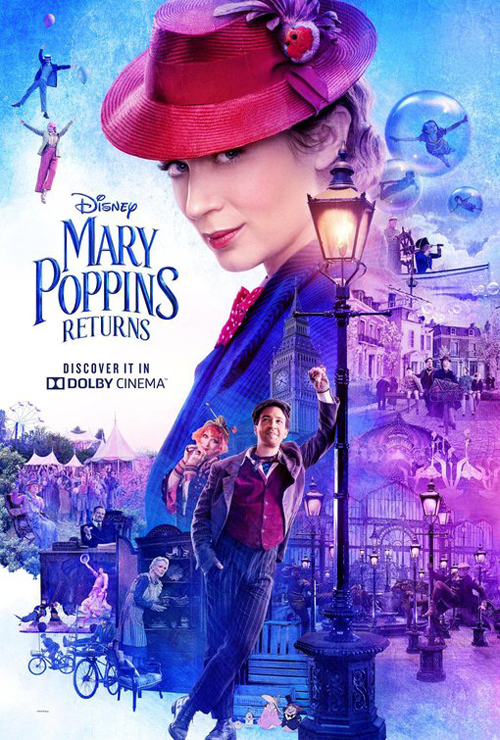