I am so sick of Scotland!

Proof that it isn’t enough just to want to make a historical epic, you have to have some level of vision for it as well. Say what you like about Mel’s Braveheart – and it isn’t a very good film – it’s got sensibility in spades. He knew what he was setting out to achieve, and the audience duly responded. What does David Mackenzie want from Outlaw/King (it’s shown with a forward slash on the titles, so I’m going with it)?

Ostensibly, and unsurprisingly, to restore the stature of Robert the Bruce after it was rather tarnished by Braveheart, but he has singularly failed to do so. More than that, it isn’t an “idea”, something you can recognise or get behind, even if you don’t care about the guy. You’ll never forget Mel’s Wallace, for better or worse, but the most singular aspect of Chris Pine’s Bruce hasn’t been his rousing speeches or heroic valour. No, it’s been his kingly winky.

Outlaw/King arrives on Netflix with the not-quite ignominy of its reception at the Toronto Film Festival, after which the director cut 23 minutes. The picture’s still two hours though, and that’s with Mackenzie’s decision going in not to tell a birth-to-death yarn, but rather focus on Bruce’s rise to claim the throne: pretty much from around the point Wallace exited the proceedings. Being selective with what to cover in a biopic is usually a smart move, so avoiding episodic highlight reels or greatest hits moments, but Outlaw/King‘s nevertheless unable to escape that rote effect.

It’s a movie desperately in need of inspiration, requiring us to trudge drearily and muddily from one battle to the next (I believe Mackenzie cut a couple) as Pine martials his fighting spirit following the death of dad James Cosmo (decidedly more sympathetic than Ian Bannen in Braveheart, in which Cosmo also featured), leading his brothers and an assortment of familiar faces including Tony Curran and Aaron Taylor-Johnson in a massive beard.

Pine is… well, I usually rate the guy, but he’s at best okay here. Not helping matters is that he’s about as modern American looking as it gets; even with a serviceable accent he seems out of place. More than that, he just doesn’t exude a leader of men vibe; he’s fine when he’s in charge of a gang of mates (Kirk), but playing a king, he’s lacking. We’re also rather bludgeoned with what an all-round good egg he is, sympathising with the serfs and making time for the kids (he even grieves for a dying lad on the battlefield, such is his big heartedness). It’s the sort of role Costner would have drafted in Bryan Adams for, to give him a soundtrack.

Then there’s Mrs the Bruce, Florence Pugh, again bring a decidedly modern flavour to a period piece (see also Lady Macbeth). Very little seems to be known about Elizabeth Burgh, so I guess it’s just possible Robert really was a highly respectful husband to her from the off, and that Elizabeth was a decidedly liberated lady, and that they had the kind of give-and-take relationship that might easily be mistaken for a twentieth-century one, give or take the odd banishment from the room when engaging in war talk (but hubby then apologising afterwards). Really, though, it just seems like the usual revisionist nonsense Hollywood – and the BBC of late – habitually indulges. It’s only a surprise Robert’s most trusted advisor didn’t turn out to be Morgan Freeman.

Apparently, there was more of their relationship that ended on the cutting room floor, as it isn’t long before she’s been kidnapped and left in a cage hanging from a castle’s walls. This by rotter Edward Prince of Wales (Billy Howle), the future Edward II, who also rather gruesomely hangs, draws and quarters Robert’s brother Neil. Edward is not the mincing queen of Mad Mel’s fourteenth-century Britain, but equally caricatured as a rash fool desperate to prove himself worthy of daddy, his behaviour culminating in his making a spectacle of himself at the Battle of Bannockburn Loudoun Hill.

Edward I: The great danger of dying of natural causes is that one may be lying in one’s bed chamber, thinking of all the things that remain left undone.

Daddy is played by Stephen Dillane, who adopts weariness as the king’s pose over the crafty, malevolent mockery of Patrick McGoohan. I initially thought this was a mistake, but the character ends up becoming one of the more memorable here, even if the father-son relationship is desperately unoriginal. Howle quickly grows tiresome, which rather means there’s a big worthy-antagonist hole in the picture once Edward I exits; Sam Spruell might have filled the gap, but he’s underwritten.

Robert the Bruce: I know you as men, but today we are beasts!

Taylor-Johnson, meanwhile, ought to be laughed off movie sets everywhere for treating his character so obviously in serious-actor mode (so full method, there’s even a shot of him whole-heartedly snotting, back in the days before tissues), but his commitment wins you over. I might have been more interested to see the adventures of James Douglas, Lord of Douglas, than Brucey winning his Scotland bonus, particularly when the detour of his mission to reclaim his land is one of the more engaging parts of the picture (he and his men go on the attack in a church).

But aside from Douglas in full roar, the copious battle scenes fail to stir anything much. Mackenzie mounts them with due conviction, but he should know that, for a battle count, they have to have mini-narratives of their own, with objectives and geography the audience can understand. Otherwise, the spectacle of muddy, bloody mayhem soon gives way to lethargy. During the big one, we are treated to a particularly ridiculous moment where Bruce punches out Edward II, but that’s exactly the wrong kind of memorable.

If you go over to the Wiki page for Outlaw/King, it will tell you the film cost $120m, which is a crazy amount of money for a movie that never feels very epic or even one indulging in the occasional awesome vista (The Independent cites $90m and that still seems like a huge amount). Netflix’s approach to moviemaking, like Annapurna before it started belt tightening, seems to be about pissing money down the drain, throwing cash at projects that would never have a hope of making their money back if they had to rely on cinema attendance (which makes one wonder how many streaming viewers that will add up to).

It’s the sort of profligacy that habitually did for studios in the past, but right now, they appear to be impregnable. I’d be cautiously approving, were this approach turning out great movies, but it seems to be taking the edge off the talents involved. With no pressures, they can deliver exactly what they want, it seems, and what they want may be rather forgettable. Outlaw/King isn’t destined for an illustrious shelf life, any more than the other, superior, Scottish historical epic from 1995, Rob Roy. 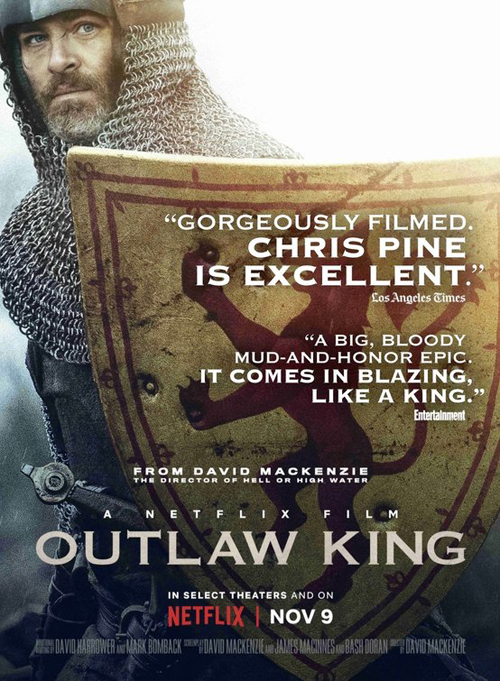