Never tangle with a Cybernaut.

The Avengers
5.18: Return of the Cybernauts

Avengers sequels not featuring Brodny are a rarity, and as obvious a no-brainer as this follow-up to last season’s crowd-pleaser is, it rather underlines that the show was never at its best when returning to past glories (not least by churning out straight remakes). Return of the Cybernauts at least boasts a couple of elements that put it above its predecessor, however, even if the improvement is very much relative.

Steed: You like Beresford, don’t you?
Mrs Peel: Yes. Don’t you?
Steed: He has a good line in claret. Particularly the ’29.
Mrs Peel: Nothing to dislike is there?
Steed: No, but if I try hard enough, I’m sure I can find something.

First and foremost is special guest star Peter Cushing, playing Paul Beresford, the brother, albeit not in surname, of Michael Gough from The Cybernauts. He’s bent on getting revenge for the latter’s untimely demise (“A rhapsody of suffering will be visited“). Why doesn’t he just send his dapper-hatted robot servant to do the job, rather than assembling a coterie of scientists to come up with some half-baked super-scheme? Well, where would the rest of the episode be if he did?

There are numerous less-than-convincing elements here, but director Robert Day keeps the episode zippy and stylish, such that even the more irksome parts – the contrivance of Beresford having impressed himself upon Emma’s life, and she being interested in him in return – don’t become overwhelmingly off-putting.

Steed: I must say, you’re very much at home here.
Mrs Peel: Paul is very hospitable.
Steed: Especially if you’re fair, female and quite beautiful.
Mrs Peel: You’re quite pretty yourself. I happen to like him. He’s civilised, good to be with and interesting to talk to.
Steed: And there rests the case for the defence.

The same applies to the Avengers’ alarmingly debonair attitude towards passing on their top-secret business to the very man who wants them dead, with the justification of “Well, it’ll be in all the papers tomorrow anyway“. Nevertheless, Macnee does a strong, studied line in guarded unease at Emma’s dalliance (“Steed, you’re jealous“; “Oh no, I wouldn’t say that, Mrs Peel. Just thoughtful“), and Cushing’s good at turning on the charm. Like Christopher Lee a few episodes back, though, it isn’t a part that really makes the most of him, reliant on standard villain utterances and antics, while the tentative romance doesn’t even slightly convince.

Mrs Peel: Never tangle with a Cybernaut.
Steed: Tangle? I was almost decapitated.

There’s only one Cybernaut this time, but it’s remarkably effective. And, despite sticking out like a sore thumb, it manages to evade detection, both entering premises and leaving them with its prey (the scientists). Somehow, the Cybernaut can track down its targets by their heartbeat (astounding!) Which explains why it doesn’t kill first Steed and then Emma when they get in the way.

Beresford: No ordinary watch, Mr Steed. It controls the will. The entire nervous system.
Steed: But does it keep good time?

The scientists’ eventually hatched plan involves turning the Avengers into automatons – a bit of an unlikely lark, but that’s Cybernautical activities all over – with the promise that “They will not die and yet they’ll wish they were dead. My brother would approve“; “Fully aware but unable to resist. They will be no more than puppets“. The first victim is Emma (“Is there anything more gratifying than obedience by a beautiful woman?“), who gives Steed a bit of a thrashing until he manages to put the controlling watch on the Cybernaut, which in turn goes berserk and crushes Paul to death.

Notables in the supporting line up include returning Frederick Jaeger (2.11: Death of a Great Dane) as Beresford’s right-hand scientist Benson (formerly Dr Armstrong’s). And, as the kidnapped scientists, Fulton Mackay (The Silurians, Fraggle Rock, Porridge) is particularly standout as the appeasing, self-preserving Professor Chadwick, Charles Tingwell (3.3: The Nutshell) is Dr Neville, Roger Hammond (The Chase, Mawdryn Undead) the unfortunate Dr Russell, and Richard Kiel-alike Anthony Dutton plays Dr Garnett (who makes a brave break for it, even getting as far as Emma’s apartment before he’s snatched back). Also appearing is Noel Colman (2.13: Traitor in Zebra) as Conroy.

Rosie: He attacked me. I could tell I inflamed him. His eyes were all misty with desire.

My favourite turn comes from Aimi MacDonald (Suzi Starlight in Rentaghost) as Garnett’s supremely ditzy secretary Rosie, entirely convinced of her own irresistibility (“Ravishing blonde beauty defends her honour to the last. Well, I would have done” she says, imagining the newspaper headlines). And also proud of her accompanying brushes with the law (“Do you know, I’ve got a super bikini. It’s ever-so revealing. Do you know, I’ve nearly been arrested twice wearing it?”)

Steed: That’s the first thing Great Britain’s ever got into orbit.
Mrs Peel: Shall I butter them, or preserved them for posterity?

Nice coda too, with Steed attempting to fix Emma’s toaster as he waxes lyrical over the innovations of the twentieth century. Only for the “mended” device to send a couple of slices of toast through the ceiling. Return of the Cybernauts is sort of what you expect from a slumming-it colour Rigg episode; polished and serviceably delivered – it’s funny seeing a Cybernaut stomping through a summery English pasture – but really rather forgettable, even with its feature “monster” and famous guest actor. 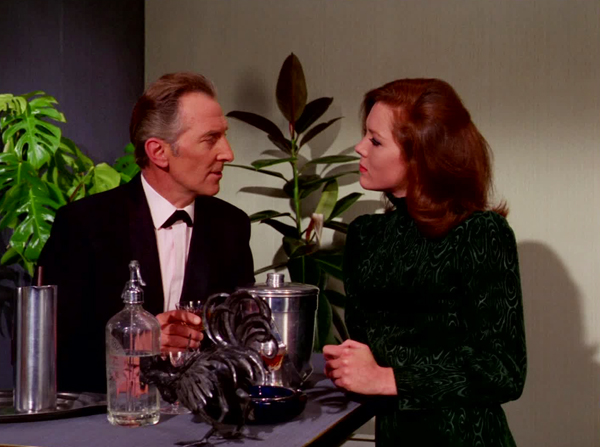 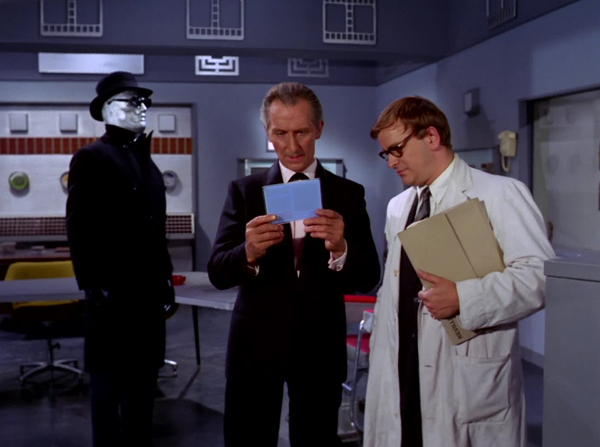 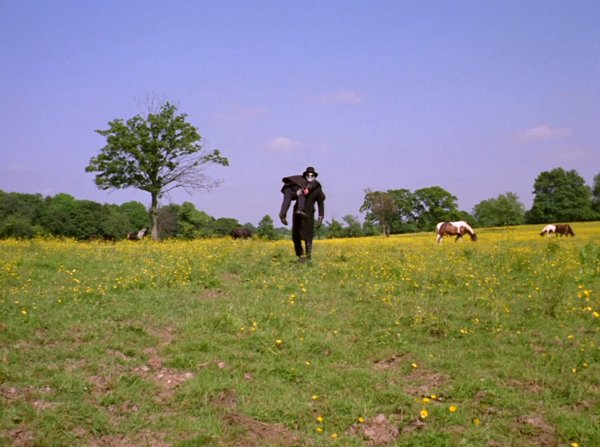 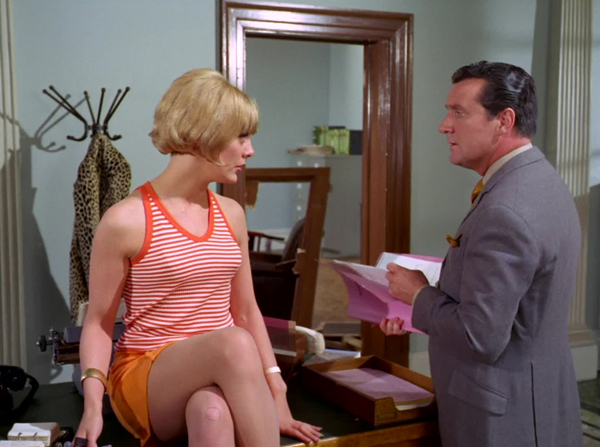 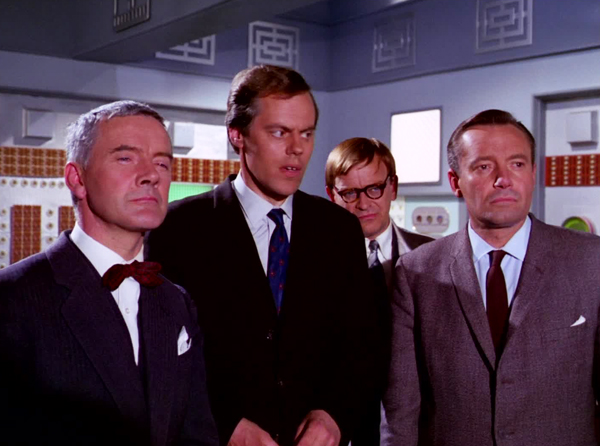 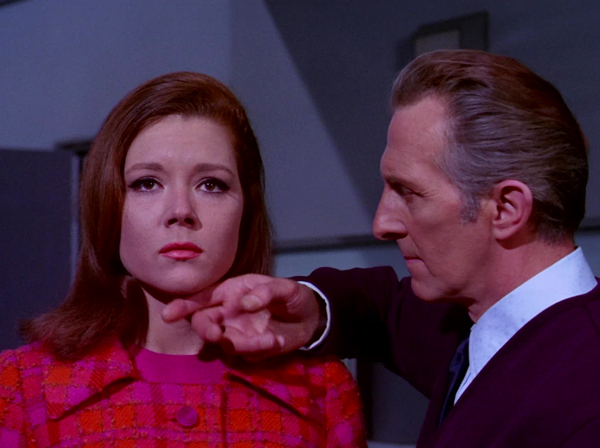