One of my very favourite episodes, such that I even like aspects others find profoundly irritating. What makes it such a hit? It might partly be a fondness for the comedy race/rally genre (Monte Carlo or Bust leads that small but distinguished pack), or possibly it’s the supremely jaunty Laurie Johnson incidental score that accompanies the jaunty jalopies. The summery scenery adds something too (Bowler Hats and Kinky Boots notes it had more location filming that any other British film series episode produced during the ’60s); the concoction as a whole is irresistible.

Pretty much everything comes together in Dead Man’s Treasure, courtesy of Sidney Hayers (his last of eight episodes) and writer Michael Winder (his only Avengers credit, he also contributed to Ace of Wands and Space: 1999, and furnished the screenplay for The Beast Must Die). Possibly a little too smoothly in the teaser, as mortally-wounded Bobby Danvers (Rio Fanning, Harker in Horror of Fang Rock, Captain Deral in Children of Auron) finds time to stop off at a country mansion, secrete a vital dispatch box in a treasure chest that happens to be the prize in an imminent rally and address an invite to Steed, take off before the villains catch him, and not even expire until he reaches Steed’s gaff and breathes some final words (“Red treasure chest“). Lucky, eh? Well, maybe not for him.

Alex: Mrs Peel jumped you?
Carl: Yeah, you didn’t see her. She’s well and truly emancipated, that one.

The bad guys are familiar presences to the show: Edwin Richfield (1.6: Girl on a Trapeze, 2.9: The Removal Men, 3.17: The White Elephant, 4.6: Too Many Christmas Trees) as Alex, approximating a vaguely Eastern European accent, and Neil McCarthy (1.2: Brought to Book, The Mind of Evil, The Power of Kroll) as Carl, going au naturel, which suggests he may be some sort of traitorous dog.

Much of the pleasure comes from seeing them cross and be double-crossed on their way to the prospective prize. This includes their throwing out some startlingly handy caltrops (did they know they’d need them when they left that morning, or do they always come prepared?) The best hoisted-by-their-own-petards moment comes after Emma’s race partner Mike (Norman Bowler) craftily changes the signpost to Swingingdale; when they arrive, Alex and Carl change the signpost back, heading off in the wrong direction, with Steed showing up soon after to follow the sign, now pointing the right way.

Splitting up Steed and Emma pays dividends too. Bowler’s very good as the charming “Major Mike Coulbourne”, giving off the air of a proto-Gambit. Until, that is, he’s revealed as an opportunistic third party vying for the dispatch box, and a particularly ruthless one at that. It’s an unlikely and too-convenient coincidence that finds him happen upon two of the opposition trailing Steed and Emma and decide there had to be something in it for him as a result.

The climactic sequence, in which Emma is rigged up to a car simulator  and in danger of death by electrocution if she veers off the virtual track, is memorable and commendably tense (the machine comes courtesy of Arthur Lowe’s Sir George, evidently enjoying a little stimulus during his runabouts; he earlier bought the farm when Carl changed the controls).

Steed is paired with Penny (Valerie Van Ost, Carry On…veteran and future victim of The Satanic Rites of Dracula). She’s one of the series’ occasional frightfully posh totties who enjoy a flirtation with Steed. Penny starts as she means to go on, late and irrepressibly upbeat (“Here, terribly sorry I’m late, darlings, I had such trouble with my clutch control“), launching into an anecdote about how Steed reminds her of her dear late fiancé David (“Poor dear fell into a buzz saw. He was terribly fond of carpentry“).

Penny: Yes, I’ve always been fascinated by men of action. Men with get up and go.
Steed: Sounds like most of them got up and went.
Penny: Yes, I have had rather a run of bad luck.

A succession of such reminiscences follow – Paul, who enjoyed surveying mountains by air in a helicopter and came down again very rapidly; cross-channel swimmer Harold, who came a cropper attempting to swim both ways underwater but had no sense of direction; Albert, always blowing things up but absent-mindedly forgetting to get off the bridge he was detonating; bobsleighing Henry, who should really have worn a crash helmet – culminating in her gushing to Steed “I don’t want to lose you too“. “You’re right, let’s just stay good friends” he responds gallantly.

Scatter-brained as Penny is, including hitting Steed on the head while aiming for Carl and proving a disaster at bringing Emma’s simulator to a standstill, she does admittedly sock Carl one with a horseshoe first time, and also succeeds in sabotaging the villains’ car for the good of the race (“I sugared their petrol… Cars are sort of horses“). And I love the way she makes off with the prize money (“Oh look. Oh super!“) Perhaps surprisingly, the Carry On… actress isn’t the subject of the following exchange:

Fnar. Lowe is pitch perfect, of course, even if he’s ushered off stage rather too quickly. Ivor Dean (2.9: The Removal Men) is also amusing as long-suffering butler Bates, taking on Sir George’s umpiring responsibilities before getting clobbered by Mike (“Have you ever woken up, sir, and realised it just wasn’t going to be one of your days?“)

There’s a very silly coda, in which Steed’s electric razor exhibits an “exceptionally powerful motor” and Emma discovers what reverse does. Dead Man’s Treasure gets a relatively rare full marks: effortless, frivolous and funny, it shows off the colour series at its very best. 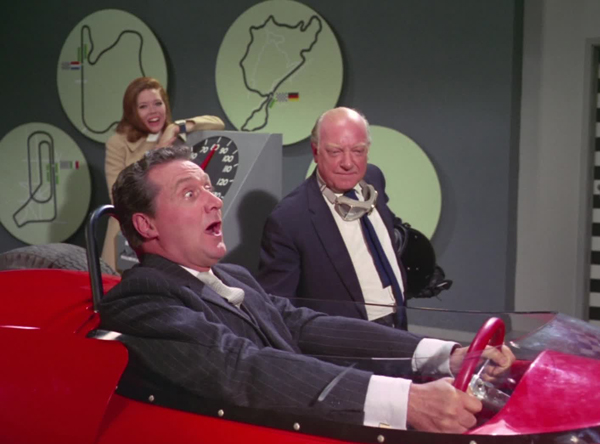 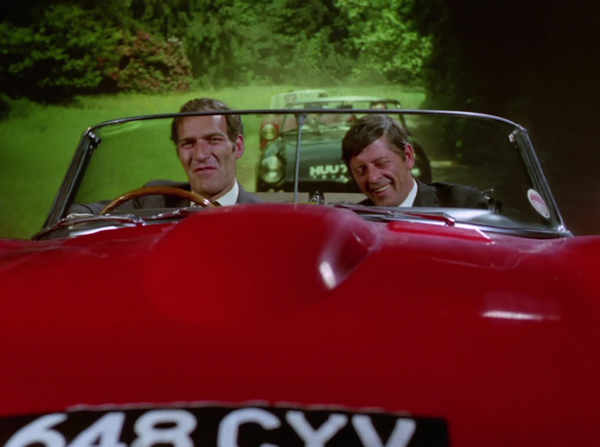 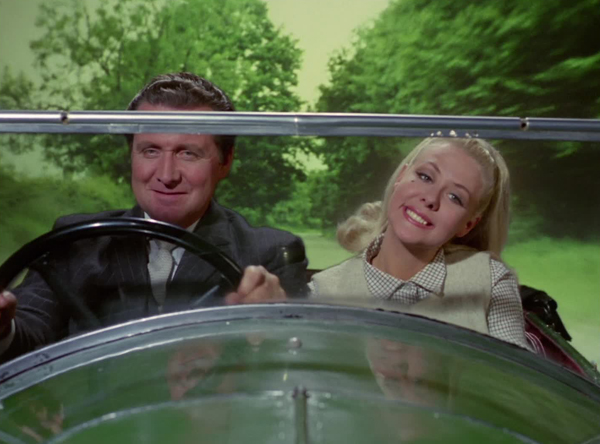 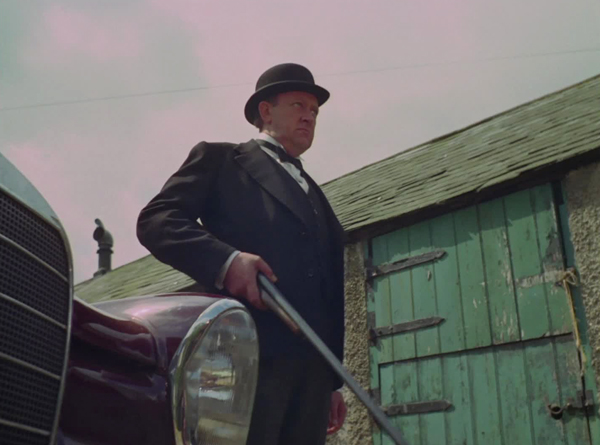 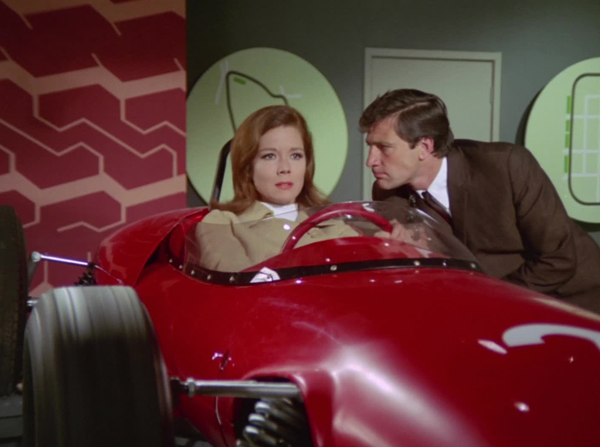 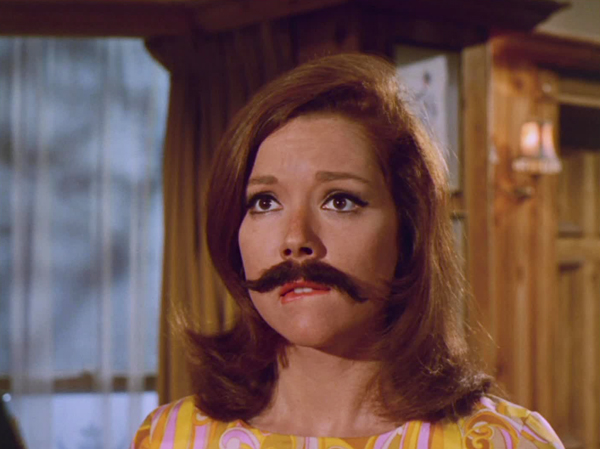