Anything can happen in Little Storping. Anything at all.

Brian Clemens’ witty take on village life gone bad is one of the highlights of the fifth season. Inspired by Bad Day at Black Rock, one wonders how much Murdersville‘s premise of unsettling impulses lurking beneath an idyllic surface were set to influence both Straw Dogs and The Wicker Man a few years later (one could also suggest it premeditates the brand of backwoods horrors soon to be found in American cinema from the likes of Wes Craven and Tobe Hooper).

SIGN: Welcome to Little Storping In-the-Swuff. Voted the best kept village in the country. Please help us keep it that way.

Certainly, substitute The Wicker Man‘s religious zeal for Little Storping In-the-Swuff’s murder racket, and you have a not dissimilar banding together of locals to fund their way of life. And in Mickle (Colin Blakely), a truly loathsome, cackling gumby who wouldn’t be out of place menacing Dustin Hoffman. If Murdersville goes wrong anywhere, it’s in fluffing his comeuppance.

He and Hubert (John Ronane) ought to have something much nastier in store than a pie in the face and a clout round the head with a library book after leaving Croft (Eric Flynn, The Wheel in Space, coming off as a bit of a Ben Daniels of his era) and Forbes (Norman Chappell, 1.2: Dance with Death, 1.23: Dead of Winter, 3.15: The Gilded Cage, 4.4: Dial a Deadly Number) very dead; for ex-army types, the latter two aren’t very handy at all). Catharsis is lacking with regard to the most despicable villains seen in the series since A Sense of History.

There’s something disturbingly plausible about the human-nature aspect of Clemens’ premise, in contrast to many crazy Avengers plots. We’re told two men showed up one day, one murdering the other in front of whole village and offering them £1m to keep their mouths shut. There were only four dissenters (one amusingly seems to be permanently gagged, and it’s unclear how they go to the toilet, but I guess people don’t need to in The Avengers. There also don’t seem to be any pesky kids about to mess things up). It’s a chilling idea – even more that, having done it, they agreed to offer the same service to others for a fat fee; the town’s wide open.

The early scenes, as Forbes is plied with pints at the pub before being accosted at his major’s house (Mickle and Hubert being particularly unpleasant towards the crockery) is deeply unsettling, emphasising that kind of irrational, random violence one doesn’t like to suspect of the inbred yokel.

Steed is out of the picture for much of the proceedings, but this is a vastly better use of Emma than having her menaced in a haunted house. Admittedly, she’s rather slow on the uptake for someone who’s normally very quick, managing to repeatedly convince herself that Dr Haymes (Ronald Hines) is a good guy. Although, in balancing fairness, the likelihood that the whole village is in on the scheme is probably the last thing she’d expect… outside of The Town of No Return. She’s also rather easily done in by a helicopter buzzing her. No wonder Steed’s required to show up to rescue her again.

The location itself is especially perfect (it’s Aldbury, which also featured as Swingingdale in Dead Man’s Treasure), and the high noon sequence on the hamlet’s main road, as Emma is surrounded by pitchfork wielding locals and must take flight, taking down a few with her, is very cool. More disturbing is the waterboarding/ witch-ducking scene, in which Rigg’s stunt double is held under for a worryingly long time.

Mrs Peel: Kiss little Albert for me, and Julie, and Gordon, and baby Brian.

Mrs Peel is amusingly made to join the dissenters in medieval shackles, hers being a chained chastity belt. Even more amusingly, when she agrees to talk, she confesses who knew she was coming: “Only one person. John. My husband“. Also known as Johnsey Wonsey.

Steed’s almost as slow on the uptake as she is during their phone conversation (a good thing no one was listening in), but there’s a definite buzz from his entering the fray to tidy up: “I was admiring your er… old customs” he informs barmaid Jenny (Sheila Fearn) of her legs, before smashing shotgun-wielding landlord Prewitt’s head into the bar (played by John Sharp, who’d go on to appear in The Wicker Man and was previously in 2.13 Traitor in Zebra). “I hadn’t even criticised the beer” he notes of the hospitality.

Steed: It may surprise you to know that I’ve had very little experience with this type of garment.

Steed also gets the best line of the episode, in response to Mrs Peel’s chastity belt. Other notables in the cast include Banks (Robert Cawdron 4.22: A Touch of Brimstone), Maggie (Irene Bradshaw, 1.13: One for the Mortuary, 2.19: The Golden Eggs), Higgins (Joseph Grieg, The Sensorites), Jeremy Purser (Geoffrey Colville, The Evil of the Daleks), and Miller (Tony Cauntner, Colony in Space, Enlightenment, Ensor Jr in Blake’s 7 Deliverance). An uncredited Gareth Thomas also appears as an assassin.

Steed: I don’t know why you had to put it on in the first place.
Mrs Peel: You were there. You saw for yourself. For protection. And on that occasion, it served its purpose.
Steed: True. Not only are we going to be late for this party, but the ambassador is going to take it as a personal affront.
Mrs Peel: Oh?
Steed: Well, we all know his reputation as a womaniser, but to turn up in armour. It really is very inconvenient.
Mrs Peel: You’re telling me. I couldn’t find a dress to match it.

The teaser (Mickle and Hubert nonchalantly play dominoes outside the village pub as a murder takes place) is one of the best. And the coda, in which Emma is still wearing (stuck in) the knight’s helmet she donned for the showdown, finds Steed able to extract her before getting his head stuck himself: “My knight in shining armour. Have a sip” consoles Emma, offering him a drink.  An episode high on atmosphere and serviced with one of the best premises the show has seen. 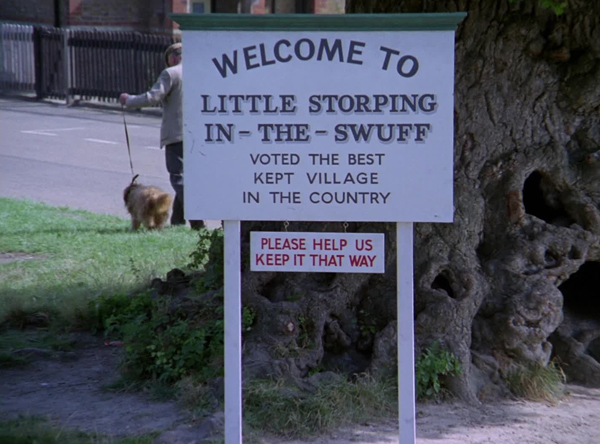 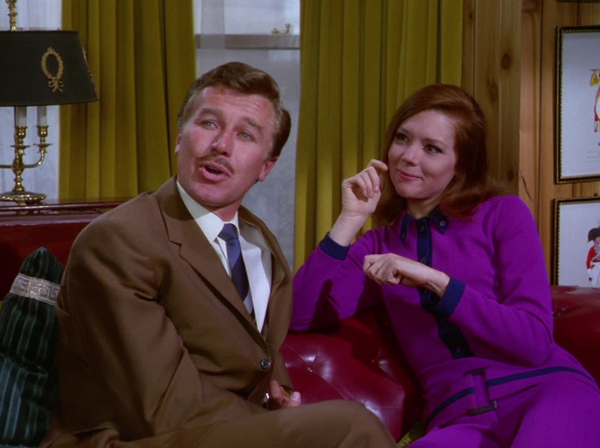 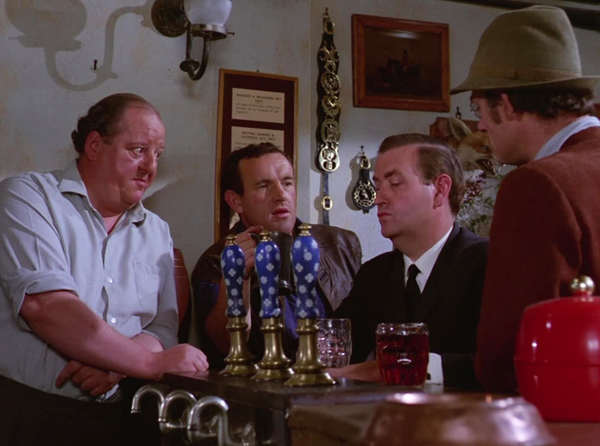 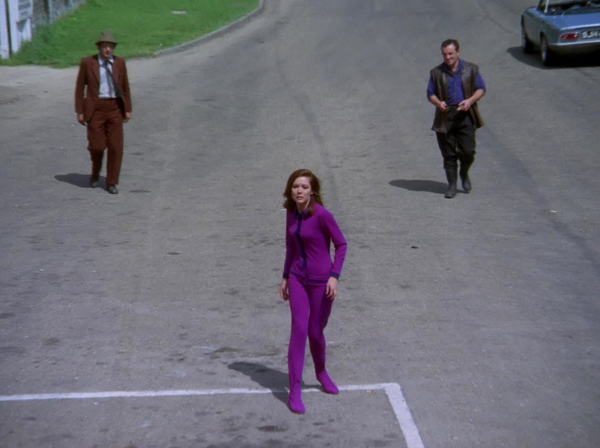 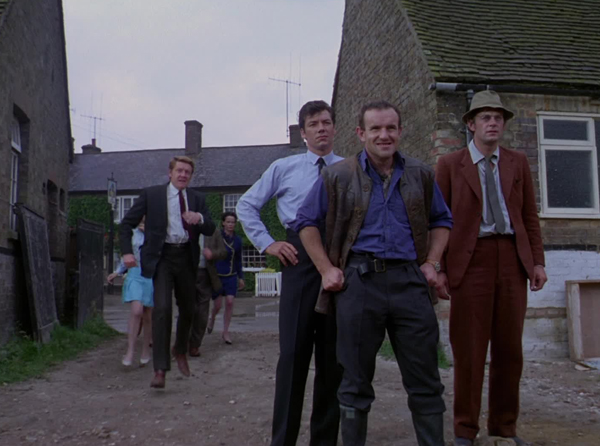 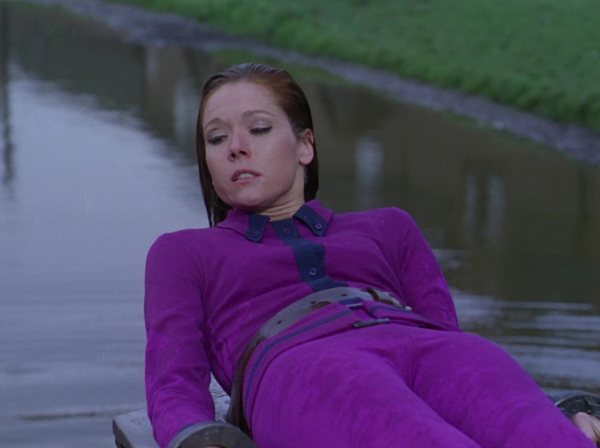 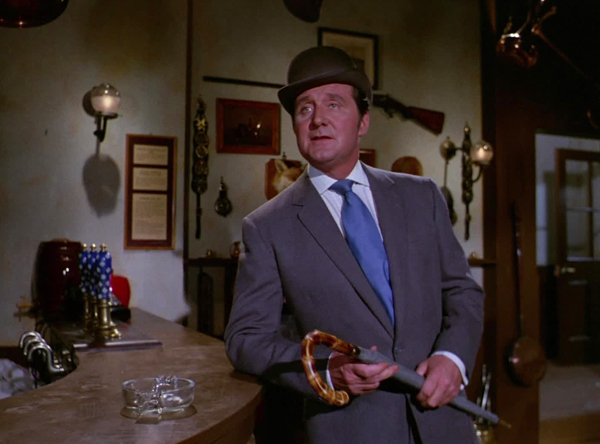 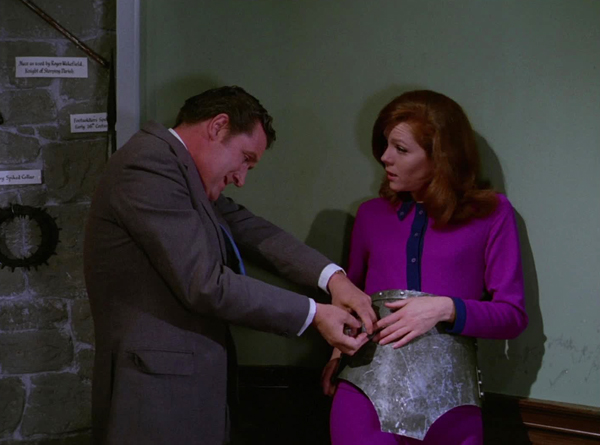 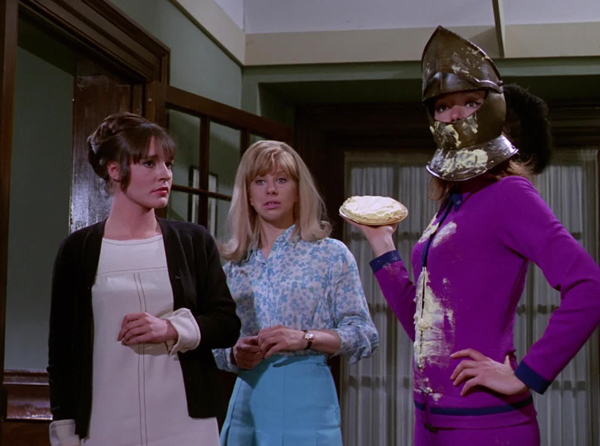 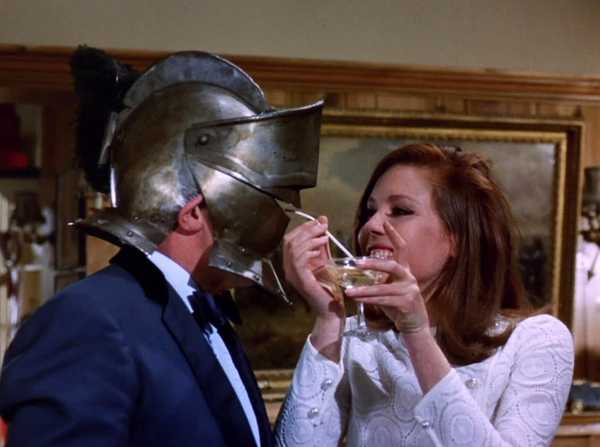