You use a scalpel. I prefer a hammer.

The latest instalment of the impossibly consistent in quality Mission: Impossible franchise has been hailed as the best yet, and with but a single dud among the sextet that’s a considerable accolade. I’m not sure it’s entirely deserved – there’s a particular, repeated thematic blunder designed to add some weight in a “hero’s validation” sense that not only falls flat, but also actively detracts from the whole – but as a piece of action filmmaking, returning director Christopher McQuarrie has done it again. Mission: Impossible – Fallout is an incredible accomplishment, the best of its ilk this side of Mad Max: Fury Road.

But let’s be clear; Fallout doesn’t come close to that landmark. We’re never in danger of really caring about the characters here, and the attempts to invest such an element are largely in vain. Yet, from set piece to set piece, this is bold, coherent, energised, enervating, enthralling spectacle. It has the life-and-limb immediacy of grittier ’70s-era movies, while retaining the sense of extravagance this sort of multi-$100 million and then some production can afford. And without falling victim to incoherent editing or confused shakycam that, these days, tends to be a substitute for realism. Plus, regular Alex Garland DP Rob Hardy seems to be working from the Antony Dod Mantle rule book of colour and luminous lighting; the thing pops at you all over the place.

The M:Is have always been masterpieces of the unreconstituted MacGuffin, even more so than the Bonds, by having almost exclusively perfunctory villains. The consequence with the Bonds is that we don’t often recall the detail of Bond’s mission, but we do know the villain he had to take down to complete it. With the M:Is, we don’t usually recall either (Philip Seymour Hoffman being an honourable exception).

This may seem like a vital component that ought to matter, but it rarely does; these movies are all about the breathless ride, and it’s only when the pictures pause long enough to enable our recollection they are otherwise – M:I-2 – that they stumble. Here, the MacGuffin-ness is unapologetically classical and basic; setting off nuclear bombs via black market plutonium cores. Really, though, it’s all about Ethan Hunt, just as the Bonds have become all about Bond (in terms of not just the focus of our attention, but the focus of the nefarious plotting). These are ever-smaller worlds.

Much crossing and double-crossing comes as part of the deal, to such frequent and giddy effect, it borders on parody (I half expected the fake-out reveal involving Alec Baldwin to break the fourth wall, so many layers of manipulation have been fabricated by this point). Sean Harris is back, playing both Solomon Lane and Benji – I wish he’d had longer as Benji and a chance to go in for some Simon Pegg schtick – and he’s an ever-formidable presence, injecting life into a fairly vanilla villain (still, he survives, so there’s always an opportunity to make him count next time. Nevertheless, lines like “The fallout of all your good intentions” are straight out of the Spectre lexicon of shite mischief making).

Likewise, there isn’t much to Henry Cavill’s CIA guy August Walker aside from his duplicity, thuggishness and a wicked cool tache. The main highlight here is the clash of imposing Cavill against diminutive Cruise; Supes performs serviceably, but the part doesn’t play to his strengths (more than sufficiently exhibited with his Bond dry-run Napoleon Solo). More effective are Vanessa Kirby’s White Widow (playing the daughter of Vanessa Redgrave’s Max from the De Palma original), an arms dealer played for playfully murky motives, and Rebecca Ferguson’s Ilsa.

Somehow McQuarrie contrives to foster a degree of doubt over the latter’s early motives and succeeds. He won’t be able to do that again. Will he? Less successful is the rather redundant attempt to frame Ethan as John Lark, something that feels tiresome rather than an extra string to a bow of thorny dilemmas. Similarly, the Widow’s repeated moving of the goalposts on bargaining without Ethan calling her bluff (and, since the demand for Ilsa’s head on a platter never comes to anything, it seems particularly unnecessary).

Honestly, though, these aren’t big biggies. Where McQuarrie makes an uncharacteristic meal of things is trying to inject the human component into Ethan’s endeavours. Did Tom whisper in his ear that he’s never going to play a superhero now, so please could Chris make him Batman? That’s effectively the announcement.

There’s the frankly ludicrous – and yeah, I know the IMF is fantasy, but still – repositioning of a taskforce that’s supposed to make hard, nay impossible, choices to one that will always put the individual above the many on the basis that hey, if you have a superman (not Cavill) involved, you can pull both off and crack a million-dollar smile at the end? Which is accompanied by a beat whereby Angela Bassett (who deserves better) is basically required to stir and repeat the now-full-of-stab-wounds Alec Baldwin’s turnaround of two movies ago. She’s actually right first time in her assessment of Ethan being responsible for this shit storm (“If he had held onto the plutonium, we wouldn’t be having this conversation“).

On top of that is the disappointingly superfluous inclusion of Michelle Monaghan, who’s basically required to deliver – well, actually, of all things, Ving Rhames delivers it for her, which only comes across as a wee bit nonsensical – a speech about how both mutually realised what Ethan needed to do was leave her in order to get on with saving the world (I’m paraphrasing, but not that much, insanely). Julia essentially needs to be there to justify Ethan getting the greenlight to be with Ilsa (but do we want him to be? She’s much too cool for Ethan’s school).

Also factoring in to this is that Monaghan’s a very sympathetic fit for this series; she and Rhames have an instant rapport. Ferguson’s great, but an inherently no-nonsense character, which ultimately makes for too little contrast with Ethan in the long term. Pegg, meanwhile, gets a marvellously out-of-his-depth fight with Harris, but contrastingly, an “I don’t believe it” scuba outing to save Lane from a submerged prison van; he’s also enough of a plonker that he completely ignores the case full of plutonium in favour of imitating Ethan with a gun.

Still, the deal here is the impossible stunts, scrapes and close shaves, and Tom coming away unscathed, the odd broken leg or two aside. The picture isn’t that breakneck to begin with, taking time to set up its above-mentioned (lame) theme, followed by a deft fake-out attack on three religious capitals. Of which, while the Apostles/Syndicate seem very dedicated, their ultimate aim is a touch nebulous, nominally bringing down the global system – and one might argue, in their favour, that they do at least see the broader problem as one of globalism, rather than a particular petty vendetta against a particular petty regime – but only when they aren’t distracted by Ethan Hunt.

Why do Ethan and August need to HALO jump into Paris? I can’t remember, but it’s very cool and sets the tone for what’s to follow, which includes an oddly-shaded fundraiser in a (plush) backroom that has the vibe of an Eyes Wide Shut outtake, a superlative fight sequence in a men’s room, and a breathlessly giddy breakout sequence extracting Lane but mostly consisting of chasing Ethan on a bike in a manner that out French Connections The French Connection. And then he chases Walker all over London.

The extended third act is similarly relentless, juggling a ticking clock of Ethan pursuing the detonator (I say juggling, as McQuarrie doesn’t so much stretch the fifteen-minute countdown as wilfully throw it out the nearest chopper window, but laudably so). The other elements being Luther, Julia, Benji and Ilsa hunting and/or defusing the nuclear devices. This reaches its zenith with Benji being strangled by Lane and Ilsa strapped to a chair, struggling to come to his rescue. On the more hilariously heightened side, the helicopters holding Ethan and Walker plunge down a crevasse as they duke it out.

Cruise is 56 now, but still looking a decade plus younger; either he’s got CGI de-aging on his side to a much higher standard than Bradley’s disconcertingly waxy visage in Allied, or he’s putting a supercharged clone through its paces. I wouldn’t count against him leading the M:I franchise for another decade, given he’s already done it ten years beyond the humanly feasible. And Paramount will pull out all the stops to make it so; while there’s no doubt the series could work without him (as long as another Jeremy Renner isn’t being viewed to take over), it’s the desire for dedicated stunt work that has seen these movies find their particular niche, when ever more CGI-assisted feats have become the unremarkable norm elsewhere.

Is Mission: Impossible – Fallout the best M:I yet? I’ll get back to you on that, but only because this series is an embarrassment of riches. Next time, though, much as I enjoyed Lorne Balfe’s score, can whoever takes the reins leave Lao Schifrin’s theme unvarnished? It’s so much more effective that way. 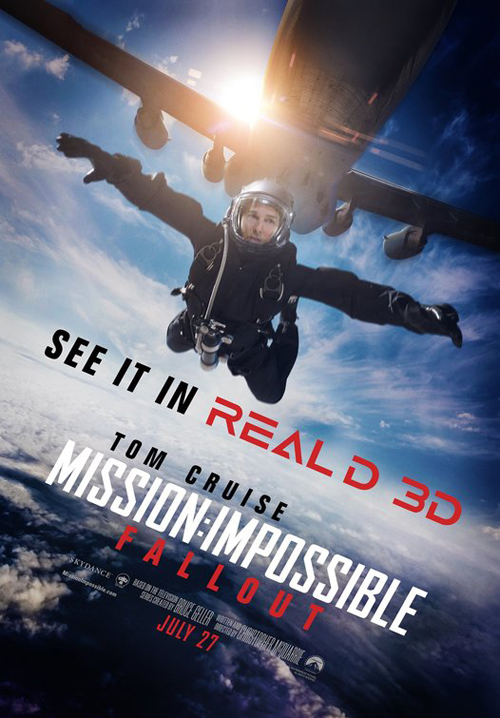