The Avengers
5.12: The Superlative Seven

I’ve always rather liked this one, basic as it is in premise. If the title consciously evokes The Magnificent Seven, to flippant effect, the content is Agatha Christie’s And Then There Were None, but played out with titans of their respective crafts – including John Steed, naturally – encountering diminishing returns. It also boasts a cast of soon-to-be-famous types (Charlotte Rampling, Brian Blessed, Donald Sutherland), and the return of one John Hollis (2.16: Warlock, 4.7: The Cybernauts). Kanwitch ROCKS!

Jessel: You are convinced?
Kanwitch: Partially convinced.
Jessel: I can create super beings. It really works.
Kanwitch: If your protégée beats all six of them, then you shall have all the financing you want. If.

The Superlative Seven saw Brian Clemens redressing Dressed to Kill, with its costume-party setting, and if it inevitably suffers from comparison to that episode, it also avoids feeling like an unwarranted retread the way others have (The Correct Way to Kill). Still, we know from the start roughly what’s going on in this one; it’s the specifics of the perpetrator(s) that are obscure, and it’s especially gratifying that this turns out to be a scam on the part of Jessel (Sutherland) to sell his super soldiers to Kanwitch (who, as noted, rocks).

The assassins obviously have some skillz, as seen in the opening, when Kanwitch’s champion (Terry Plummer) is dispatched. So I guess Jessel would have delivered something, if Kanwitch had taken the bait (“With your country’s financial assistance, I can make an army of assassins“). Or maybe he would just have taken the money and run. I’m not sure you’d have figured Sutherland was destined for greatness from this, but it’s always interesting to see him pre-Hawkeye Pierce.

Everyone – barring Emma, who drops by later – is bundled into a plane that turns out to be on automatic pilot, all having been given a different host’s name (Steed is under the illusion his invitation is from Sir George Robinson – “He’s always going up the Amazon and getting lost“). It’s an “acid test”; these experts, in their own manner, with records of courage and fortitude, are to fight one of Jessel’s unbeatable opponents, an exemplar in all forms of combat; their chances of survival will depend on their own individual alertness and ingenuity against a killer among them.

Jason Wade (James Maxwell, 3.23: The Outside-In Man) as two-faced Janus, assumed to be a big game hunter (there seem to be a few of those in The Avengers), but he actually admits he’s the offender off the bat (“I track things down, Mr Steed. And then, I dispatch them as quickly as possible“). He appears to be the fourth man down (they all end up in upright coffins), but it turns out he’s faking it. And when he does buy the farm (Macnee’s stunt double puts up his best fighting moves yet, before lobbing a spear into Wade’s chest), he’s soon resurrected, on account of his twin taking his place (the costumes are mostly obvious reflections of the wearer here, barring Steed’s nineteenth-century general and Dayton’s executioner).

Max Hardy (Hugh Manning, 4.16: The Thirteenth Hole), dressed as a WWI German officer, runs a fencing school, and is the third slain (stabbed in a sword fight).

(Camp) Freddie Richards (Leon Greene) “claims to be the world’s strongest man” (you wouldn’t know it to look at him) and appears as a fancy-dress strong man; he succumbs first (a broken back).

Joe Smith (Gary Hope, 1.25: Change of Bait, 3.12: November Five) is a matador disguised as a matador (“the best of all British bullfighters” – how many can there be?) He’s done in second, warding off an oncoming cart before, in particularly idiotic fashion, getting lanced with a pitchfork.

Mark Dayton (Blessed) comes on styled as executioner (complete, initially, with concealing hood) and is expert in unarmed combat. Dayton’s the fourth to pop his clogs (if you don’t include Wade, and on that basis is the final innocent party to go down). Booming Brian is particularly good at making Dayton’s suspicion of Steed aggressively persecuting.

Hannah: I’m Wilde.
Steed: Are you? Every minute of the day?

Mrs Hannah Wilde (Rampling) is clad as a cowgirl and is an crack shot, having represented Britain. She doesn’t get killed, because killing a girl would be unsporting. But she does hit Steed on the head, very unsportingly:

Mrs Peel: Where is Steed?
Hannah: Back at the house. I’m afraid I clobbered him.
Mrs Peel: Naughty. He won’t like that.

Obviously, they don’t do the sensible thing of everyone sticking together, or the masterplan would collapse in upon itself. But the twist of the double is effective, and the reliable Sidney Hayers makes the most of the studio setting, such that it adds, rather than detracts, from the claustrophobic atmosphere.

Dayton:What about you? What sets you out from the crowd?
Steed: (straightening Richards’ bent poker) Oh, maybe the way I hold my umbrella.

Like Epic, this gives Rigg a break to focus on Steed, and he’s agreeably unflappable at the outset (“Just getting myself a drink, to ease the tension“), finishing off one over-confident Wade (“What shall it be for you, then? The bullet, the garrotte, the knife perhaps?“) before succumbing to Wilde’s gun butt. He also demolishes Jessel with a candlestick after Hannah has shot the gun from his hand, making Steed more into brute force and getting his hands dirty than we’ve seen for quite a while.

The opening features a shamelessly interior piece of woodland where Steed is (plastic) duck shooting (with his name on it), before Emma quacks and tells him “You’re needed“; we’re back there for the coda, as Emma blasts teddies, from the sky, one of which contains a bottle of champers, naturally. So she’s obliged to bring down a couple of glasses to accompany it. 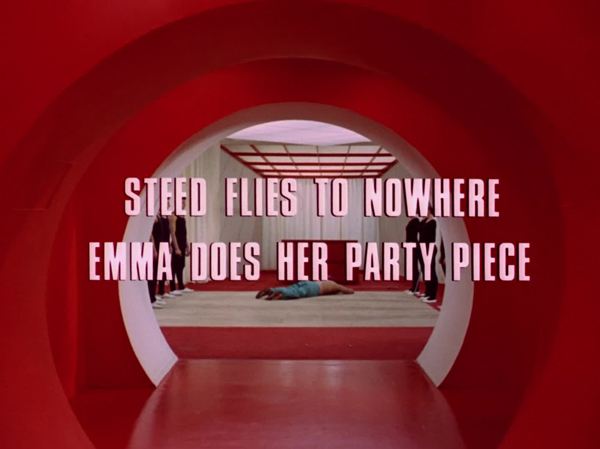 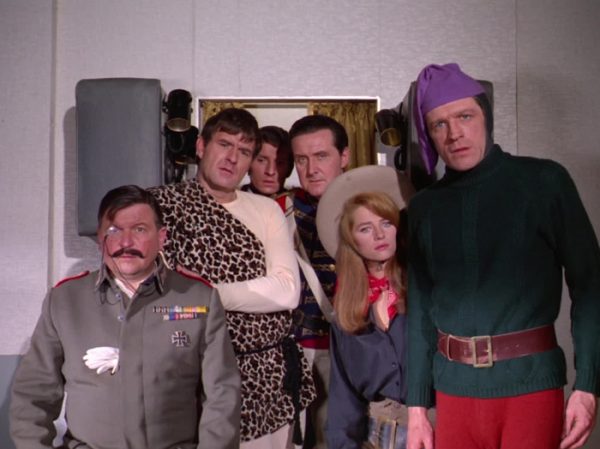 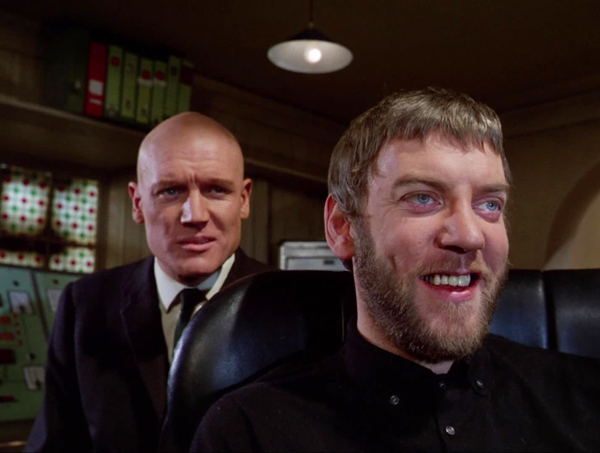 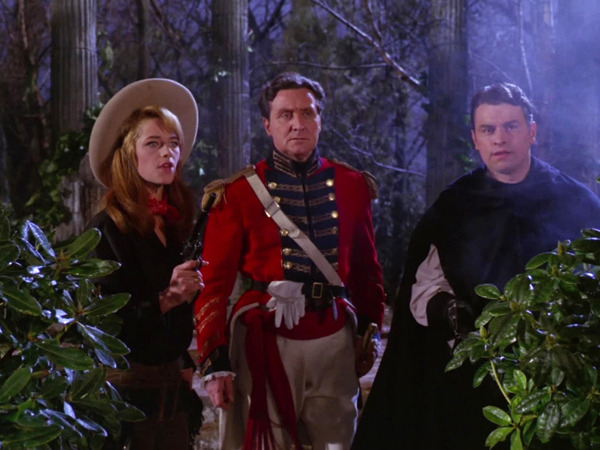 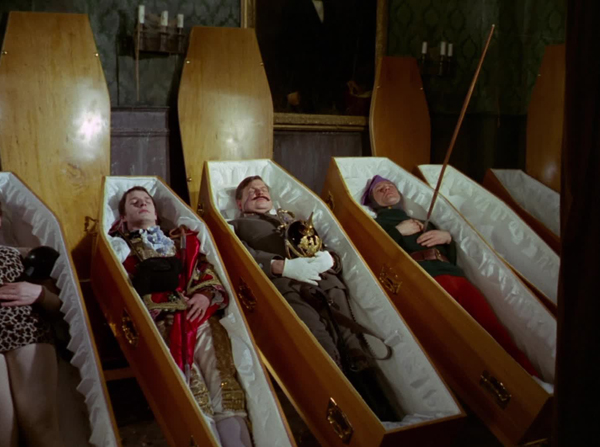 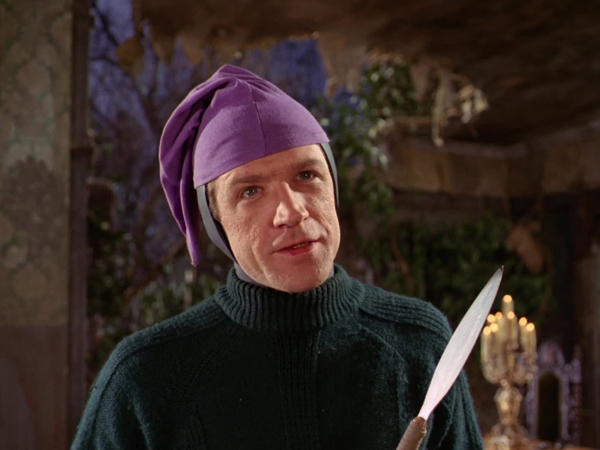