There’s a good chance that, unless you go in armed with ludicrously high expectations for the degree to which it’s going to take the piss out of its premise, you’ll have a good time with The Meg. This is unabashedly B-moviemaking, and if a finger of fault can be pointed, it’s that director Jon Turteltaub, besides being a strictly functional filmmaker, does nothing to give it any personality. Beyond employing the services of the Stath, anyway. Obviously, though, the mere presence of the gravelly-larynxed one goes a long way to plugging the holes in any leaky vessel.

This adaptation of Steve Alten’s novel Meg: A Novel of Deep Terror has famously (or infamously) been in development hell for about two decades, and the screenplay from Dean Georgaris (duck and run: Lara Croft Tomb Raider: The Cradle of Life, Paycheck) and Jon & Erich Hoeber (their names are all over Battleship) dutifully leaves no cliché unturned.

The Stath is Jonas Taylor, haunted survivor of a previous encounter with the titular Megalodon that resulted in the deaths of several crewman he was charged with saving. He’s left drowning his sorrows in Thailand, having been accused of losing his nerve and fantasising the creature’s existence while under the influence of a bout of pressure-induced psychosis. Amusingly, this entirely unreasonable charge follows him around a good way into the movie, such that he’s having “Coward!” shouted at him when someone else dies, the accuser being met by the patented Stath quizzical/about-to-nut-you look.

Called in when his ex (Jessica McNamee) finds herself trapped in a previously undiscovered pocket of the Mariana Trench, it isn’t long before he’s sparring with the Megalodon once again (just hearing his disconcerted utterance of the word is gold). This owing to the fact that he rescues her, and in so doing provides the means for the super shark to find a way to the surface. Cue havoc and carnage (but let’s be clear about this; the Stath does not punch the shark).

There’s nothing here as joyous as the use of Bobby Darin’s Beyond the Sea in the trailer, which may suggest trailer makers should make movies and Turteltaub should make trailers (one of Hollywood’s most random directors, which is saying something, he has lurched aimlessly from Cool Runnings to While You Were Sleeping, Phenomenon to Instinct, National Treasure to Last Vegas, resolutely ensuring none of them have been much beyond halfway decent).

Discontent has been voiced – particularly on the Stath’s part, who wants to see some “fucking blood” – by the filmmakers that none of the gory deaths made it to the final cut, but I don’t really think that’s an issue (why should it be? it never was for Jaws); it’s mainly that it needed to let its often dead-weight supporting characters in on the joke, and let more of them meet with untimely ends in order to raise the stakes.

It isn’t until the final reel, when the Meg is unleashed on beachgoers, that something of the movie’s potential is fulfilled. It’s a disappointment pooch Pippin doesn’t end up as shark food, although this does yield a dynamite (patented) Stath look of disbelief, but the sight of an enormous shark chowing down on a guy trying to outrun it in an inflatable beach ball is positively inspired. Somewhere on the cutting room floor, I feel sure, there’s a scene in which the overweight Chinese kid gets guzzled too, as he’s been so clearly established as a demanding brat deserving of a grisly end; its absence is a terrible shame, clearly.

Prior to this, there are frequent longueurs punctuated by shark action, and only a few of the cast hit a memorable stride; DJ (Page Kennedy) is the fraidy cat and therefore the most sensible member of the research facility’s crew (the facility itself remains remarkably intact, given the ample opportunities for springing it full of leaks). Rainn Wilson ekes some laughs as the financier (and a nice line in damage limitation that becomes his undoing).

But reliable types like Cliff Curtis and Robert Taylor are left struggling for air. Ruby Rose, meanwhile (as Jaxx Herd – whateverthefuckery), clearly has the physiognomy to play a perfect Vulcan at some point, but if required to express herself beyond strenuous eyebrow action is entirely unconvincing (this might be why her mute hit woman in John Wick Chapter 2 made such a contrasting impact).

Anything with Li Bingbing, in particular the attempts to kindle a romance with the Stath, with whom she has zero chemistry, kills the picture stone dead. In contrast, Shuya Sophia Cai comes off surprisingly well as her daughter, and has abundant chemistry with the Stath, whose best line might be his Finding Nemo “Just keep swimming, just keep swimming” as he ventures off to find the Meg.

There are various semi-Jaws homages along the way – I don’t think the variable CGI is a tribute to the evident plasticity of Bruce, but some might try and claim it as such – including equipment failures and cases of mistaken shark identities. But, while Turteltaub can deliver a moderately engaging suspense sequence, they’re never in the same league as the ’berg’s. Which, to be fair, I doubt anyone was expecting. I did like the moment where, having caught the Meg, a significantly larger number decides to tuck into it, landing on the deck in the process and capsizing the ship. The picture needed more of that kind of deliriously daft escalation. Maybe in the sequel?

If this one banks enough, there’s sure to be one, although Deadline Hollywood led its story of the impressive first weekend grosses by doubting this one was cheap enough to make a profit. Certainly, Steve Alten has seven sequels just begging for adaptation (eight, if you count how little of the original went into this). Or maybe the makers should switch to a different giant aquatic monster.

In some respects, I was more impressed by the squid attack on a submersible than the title character. In the pantheon of major Hollywood shark movies, then, this one beats most of the Jaws sequels, but trails the likeably OTT Deep Blue Sea (which succeeds in being both funny and suspenseful).

Possibly the most gratifying aspect of The Meg – which is just a movie, remember, and so doesn’t need to be beholden to hypotheticals that might spoil an otherwise good, consequences-free time – is its unapologetic lack of hand-wringing over the necessary extermination of the beast.

Sure, there’s voiced protest against the finning of real sharks – who are actually given their own hero moment here, although curiously, the makers have no qualms about repeatedly visiting slaughter on poor unsuspecting whales – but no one’s seriously making the case that it should be added to the endangered species list at the expense of a prior diet of untold humans.

In that respect, it’s a refreshing antidote to the incredibly dense ethical “dilemmas” of Jurassic Parks/Worlds, where despite the dinos existence being entirely at man’s meddling behest and many of them being expressly intent on eating as many people as possible, a faux-environmentalist message of preservation follows them wherever they go. You wouldn’t call The Meg an exactly satisfying main course, but as fast food goes, you could CHOMP much worse. 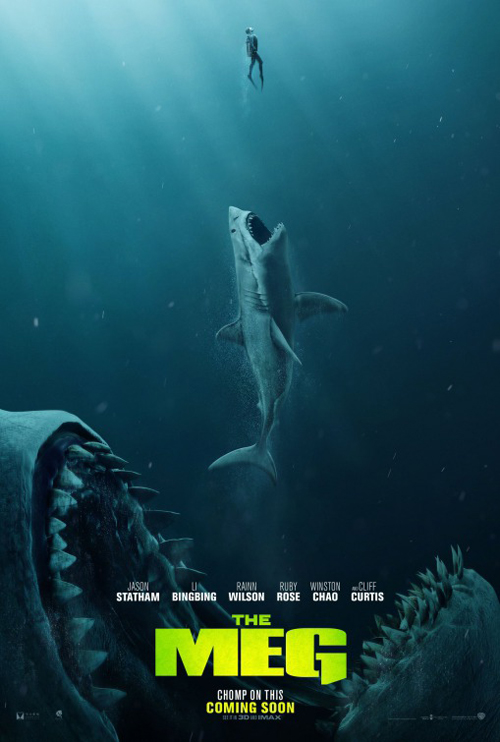