Well, in this case, the cats are going to kill the curious.

The Avengers
5.8: The Hidden Tiger

Another of the season’s apparent run-on ideas, as the teaser depicts a character’s point-of-view evisceration by aggressor unknown. Could this be the Winged Avenger at work? No, it’s, as the title suggests, an attacker of the feline persuasion. If that’s deeply unconvincing once revealed, returning director Sidney Havers makes the attacks themselves highly memorable, as the victims attempt to fend off claws or escape them in slow motion.

Sir David: Whoever did that, Mrs Peel, was wild, inhuman, bestial.

Havers previously made a mark with three Season Four episodes, adding bags of style to the really rather straight (or dry) science-fiction trappings of The Cybernauts and Man-Eater of Surrey Green (he also provided a convincing deluge in A Surfeit of H2O). Here, he can’t disguise the joins between Steed and Emma’s doubles, but that’s about the extent of the criticism.

And while Philip Levene’s teleplay may not stretch to going the full quirk, the contribution of Ronnie Barker in that regard, as Mr Cheshire, the CRO of P.U.R.R.R. (The Philanthropic Union for Rescue, Relief and Recuperation – of cats), entering the scene at the halfway mark (after much wandering about a studio wood, or hilltop, by our heroes), gives the story an undeniable boost.

Nesbitt: This isn’t just a nose. This is a built-in cat detector. If there was one on the loose, I’d know it.

That first half is perfectly serviceable, though, in which a butler (John Moore) is murdered, soon followed by his employer, Sir David Harper (Jack Gwillim, Poseidon in the 1981 Clash of the Titans and Van Helsing in The Monster Squad). Steed and Emma set their sights on his experimental farm, and rope in Major Nesbitt (John Phillips), a local big game hunter, to aid their hunt for a savage cat (“Reckon I know about as much about the big cats as any man living. Ruthless natural born killers“). It isn’t long before Erskine (Stanley Meadows), a scientist who works on the farm, is attacked and killed (“Grade one pasteurised“), followed by Nesbitt, who is gotten good, despite ensconcing himself in a cage (“A mysterious mystery!“)

P.U.R.R.R. inhabit Furry Lodge, Sussex, which conjures slightly eyebrow-raising images. The main drive displays a series of warnings to undesirable canines (“NO DOGS”, “DOGS STRICTLY PROHIBITED”, “DOGS ABSOLUTELY PROHIBITED”), while Edwin Cheshire treats his feline fellows with the full dignity of human friends, including funereal honours (“Prince Courtney of Chippenham, Champion of Champions. Is there a cat lover anywhere who will not mourn this pussy? Farewell. Farewell. Farewell. Faithful, fair and fulsome feline friend“). The only surprise would have been if Ronnie’s barking ailurophile had turned out to be the criminal mastermind, and although there’s a vague intimation of mad ideas (“It was said that one day, cats would inherit the Earth. And one day, Mr Steed, they shall. One day“), they’re just an aside.

Instead, as is commonly the case, it’s one of his juniors, operating under his oblivious nose. Although, it’s questionable how he could ignore Angora (Gabrielle Drake, Nick’s sister and Gay Ellis in UFO., as well as featuring in The New Avengers‘ Dead Man are Dangerous and the, ahem, classic Au Pair Girls; she also reunited with Barker for a Two Ronnies). Angora sports suitably feline makeup, and Drake keeps her claws out throughout. As such, it’s highly appropriate she should get her comeuppance in a catfight with Emma (during which, for a change, it’s Steed who’s all tied up).

Dawson: To beam these waves into the brain of a cat, you’d find yourself with a tiger in your lap.

Angora is aided and abetted by Dr Manx (Lyndon Brook, who would also resurface in The New Avengers, and could later be seen in House of Cards). They may have fantastic curtains in their office, but their fiendish plan bears up to no scrutiny at all; they will use electronic circuits transmitting brainwaves to control moggies. Dawson (Frederic Treves, Lieutenant Brotadac in Meglos) explains the process to Steed. The object is to kill cat owners throughout the country: “Inside every cat, there’s a hidden tiger, and I can release it“. More precisely:

Manx: Our membership runs into millions. Few will survive, but for those who do, there’ll be wealth, unlimited wealth. Banks, safe deposits, diamond vaults. And all by the mere flick of a switch… Easy, isn’t it?

Yes… Perhaps that’s the secret plan for the millions of currently chipped pets throughout the country… Manx is so out of it that he overreacts losing control of his van when Emma leaves her placid and de-chipped moggy– provided by P.U.R.R.R. as a replacement for her dearly departed Little John – on board.

The interaction and general playfulness of Steed and Emma in Hidden Tiger is one of its high points, with all manner of suggestiveness, including this particularly innuendo-laced exchange:

Cheshire: Now, Mr Steed, the name of your beloved pussy?
Steed: (smiling broadly) Oh, er, Emma. Oh, a cuddly bronze tabby.
Cheshire: And what a joy it must be when she’s curled up in your lap.
Steed: Oh, well, I’ve never thought of it that way.

This is later followed up when Emma visits P.U.R.R.R. in search of her missing moggy, the aforementioned Little John. At first, the patented Identicat system is a miss (“Little John’s nose is much more…. aristocratic“) but Cheshire soon finds a match. Similarly to Steed, domestic details are dropped concerning her special feline:

Cheshire: But tell me, does your Little John have any other peculiarities?
Mrs Peel: Well, he’s very bad tempered first thing in the morning. Until he’s had his first glass of champagne.
Cheshire: Yes.

Other incidental pleasures include Steed attempting to track down Sam Jones, last surviving member of the P.U.R.R.R. governing committee, via namesakes in the phonebook (“Eighteen months with remission? I am sorry, madam“). There are also numerous feline plays on words (“Mrs Peel, I’ll call you back. The cat’s out of the bag“, “Well, in this case, the cats are trying to kill the curious“, “Mrs Peel! Pussies galore!“) And, for once, just once, Steed turns down the offer of a drink (“Let’s see. We have homogenised, pasteurised, full cream, dairy special. Or perhaps you’d prefer a short? I’ve got some condensed here somewhere“).

While it may seem churlish to highlight flaws in a masterplan as creative as this one, it’s not-a-little delusional of Angora to assert there’s no evidence of P.U.R.R.’s involvement. Not when they’re bumping off everyone associated with the cat sanctuary, as if they won’t get fingered eventually. But probably no more amiss than considering the killing of a million cat owners will (a) succeed and (b) achieve any kind of appreciable goal.

Mrs Peel: “Humour in Milk”. “Milk and its Derivatives”. Do you mean to say you’ve waded through all these?
Steed: I think the word is “skimmed”.

The opening call to duty sees Emma discovering “Mrs Peel” beneath her wallpaper, while Steed appears to uncover “We’re Needed“. This is followed up with their decorating the walls in the coda; he’s painting a cat (“Definitely a repressed personality“), while his signature reveals “extrovert overtones“, and then a love heart he paints over when Emma catches sight of it. Also, a final pun, one she finishes, as he steps in a paint tray (“By acting as we did, we narrowly averted…“: “A cat-astrophe!“). A fun episode, but it needed to go that extra distance to reach the top tier of the season. 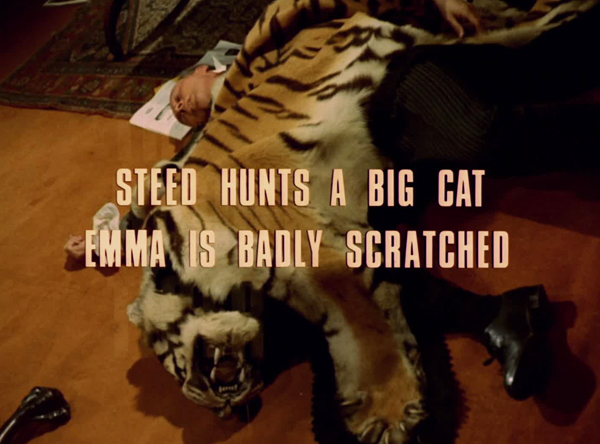 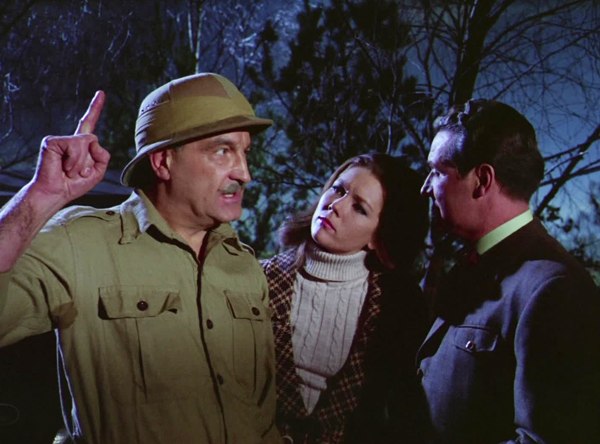 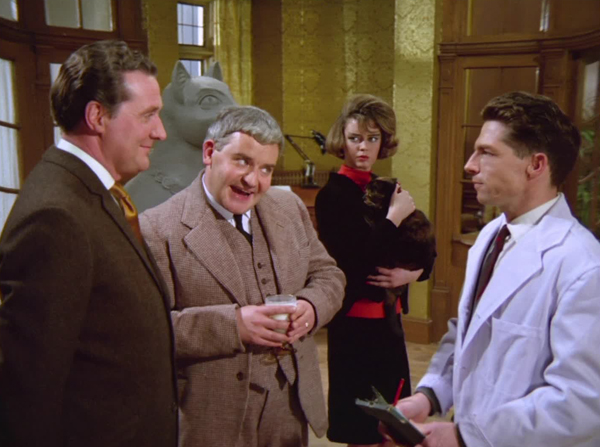 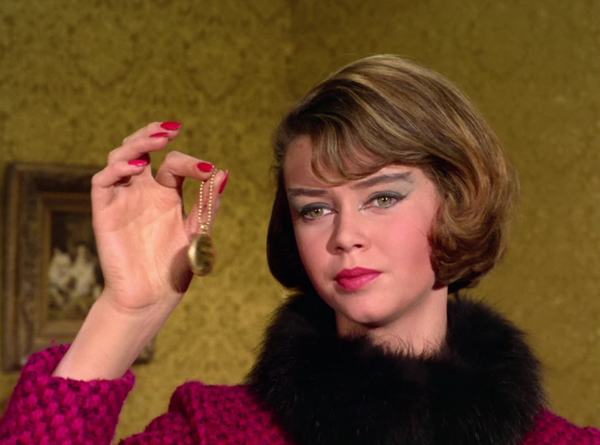 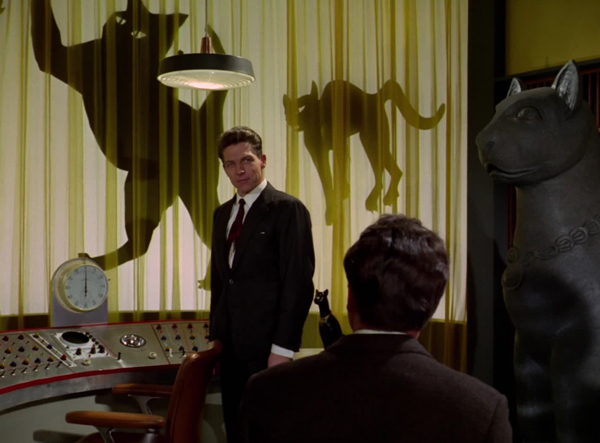