The best place to hide a needle is not in a haystack, but among a lot of other needles.

The first of two TV movies featuring Ian Richardson as Sir Arthur Conan Doyle’s greatest creation. And a very upbeat, personable Sherlock Holmes he makes too, an effective contrast with the more burdened Jeremy Brett incarnation of a few years later. The Sign of Four is lightweight but efficient, its biggest stumble being the manner in which it reframes the plot so as to present most of the salient facts upfront, and as a consequence, impinge on the mystery and sleuth’s deductions.

A huge contretemps surrounded the production of this and The Hound of the Baskervilles, with regard to laying claim to the detective’s cases. Producer Sy Weintraub, who had previously focussed on Edgar Rice Burroughs, including Ron “Doc Savage” Elly as a TV Tarzan in the ’60s, had bought the rights, only to discover they were about to expire in England; Granada were poised to make their (often definitive) adaptations. A subsequent out-of-court settlement saw Weintraub walking away with his costs on the truncated project covered and a profit too.

Something of a shame, as while no one is likely to claim a protracted stint in the role would have been anywhere near as essential as Brett’s take, Richardson’s performance goes a long way to embolden an otherwise competent but unremarkable production.

Weintraub is reported to have planned a series of twenty-two two-hour (with ads) adaptations. Besides the two that got made (Richardson said he signed for six), Charles Edward Pogue also penned The Prince/Napoleon of Crime (featuring Moriarty). This later became the “rather awful” (Pogue’s words) Hands of a Murderer starring Edward Woodward. The writer’s intervening ’80s saw an array of prolific projects, meanwhile, including Psycho III, The Fly remake (heavily rewritten by Cronenberg) and the underrated D.O.A. remake.

Whatever Pogue’s virtues elsewhere (and The Hound of the Baskervilles fares much better), his decision to divest The Sign of Four of its investigative flair rather cripples any narrative tension. It doesn’t drag exactly, but neither does it grip. Director Desmond Davis (Ray Harryhausen’s Clash of the Titans) does a serviceable job, with a nod towards a gothic, Hammer tone at times, but his most notable decision is to perma-flood the exterior (and sometimes interior) locations with authentic period fog.

Watson: What a very attractive woman.
Holmes: Is she?

David Healy offers an amiable enough Watson (Richardson much preferred working with him to Donald Churchill in Hound; Healy was unavailable due to appearing on stage in Guys and Dolls). Although, Cherie Lunghi’s Mary Morstan is so far out of his league, it’s ridiculous. This may be the reason that, while Watson is evidently smitten – “That’s a rather liberal dosage. For Miss Morstan’s benefit I presume” notes Holmes of his partner’s cologne – there’s nary a hint of reciprocation or anything further transpiring between them.

Holmes is amused by his friend’s behaviour, but while he’s clearly unswayed by the opposite sex, it’s in a jolly, rather than dismissive way (“Watson, the most winning lady I ever knew was hanged for poisoning her three small children for their insurance money“). Also present, in terms of regulars, is Terence Rigby’s Inspector Layton… Well, kind of. He was evidently playing Lestrade (the character’s name is dubbed), but this was changed when Ronald Lacey was cast as the character in Hound. Layton’s very much in the mould of idiots of the Yard.

Layton: One legged man and a short savage? It’s straight out of some penny novel.

Comparisons with the Brett adaptation four years later – one of the best of that series, then firing on all cylinders – are inevitable. It had the considerable boon of John Thaw guesting as Jonathan Small; not that Joe Melia isn’t very good here, but he doesn’t bring the air of menace Thaw does.

The Brett version also managed to avoid causing offence with its depiction of Tonga, casting Kiran Shah rather than treating us to John Pedrick (an Ewok in Return of the Jedi) in black face. It doesn’t help any that this Tonga is also a savage pigmy (probable) cannibal. Richardson is delivered a nice bit of pre-Downey Jr action when he rushes in to save Mary from Tonga’s clutches, wrestling with him and all but throwing him out of an upstairs window. Later, he manfully tussles with a knife-wielding Small and emerges victorious.

Holmes: I never guess. It is destructive to logic.

There’s much to relish in Richardson’s portrayal. His brio is infectious, be it lacing his conversation with innuendos when speaking to a boat-owner’s wife – while disguised – or winding up an oblivious Watson when he returns to 221B, the latter scoffing food and demanding he wait until Holmes returns (“If you’re going to force me to stay Watson, you might at least offer me a muffin“).

He’s generous of nature and spirit, be it towards the Baker Street Irregulars (“You’ll make a first-class Scotland Yard Inspector one day” he tells Wiggins) or the bloodhound they enlist to track down the source of creosote (“Good old, Toby” he exclaims enthusiastically). Davis includes a nice visual conceit here, cutting progressively through modes of transport as Holmes and Watson converse; from walking, to riding in a rag-and-bone cart, on bicycles, and in the back of a coal truck.

Holmes: Ohhh, I’m drawn to these sordid affairs like a magnet.

Also of note is the presence of Radio 4’s illustrious Holmes Clive Merrison as Bartholomew Sholto. And that, if Mary Morstan is spared a fate worse than Watson, she is compensated with part of the prize Agra treasure (the Great Mogul) by Holmes. The rest doesn’t end up on the bottom of the Thames, since Holmes locates it in Small’s peg leg. Will he do the honours and fence the Mogul for her?

A solid Sherlock Holmes tale, then, but mostly for Richardson’s exuberant take on the role. Be warned however, if tempted by the Blu-ray release; despite a 4K restoration, Second Sight have seen fit to cut the top and bottom of the picture to render it in widescreen. The dolts. 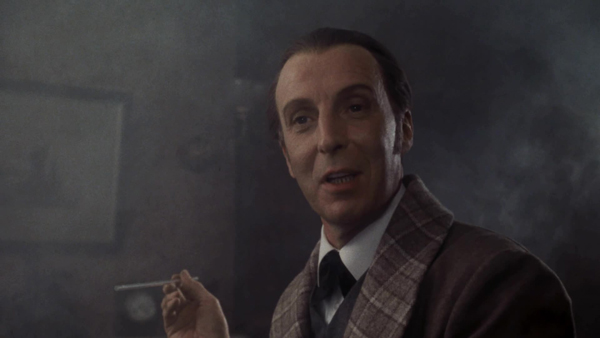 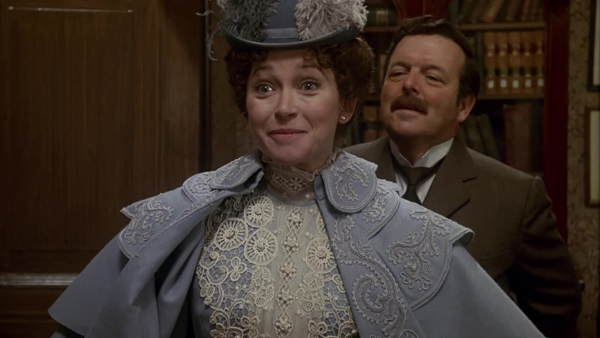 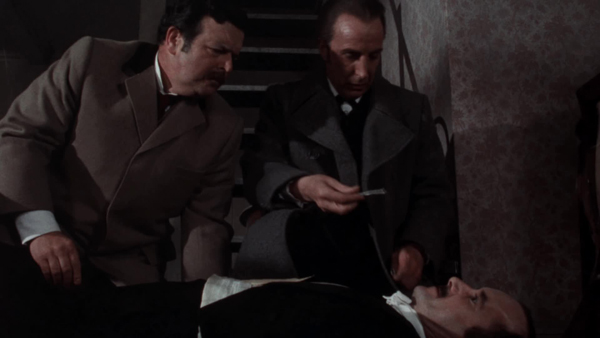 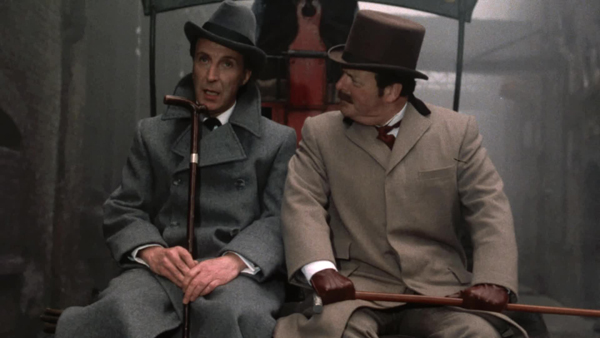 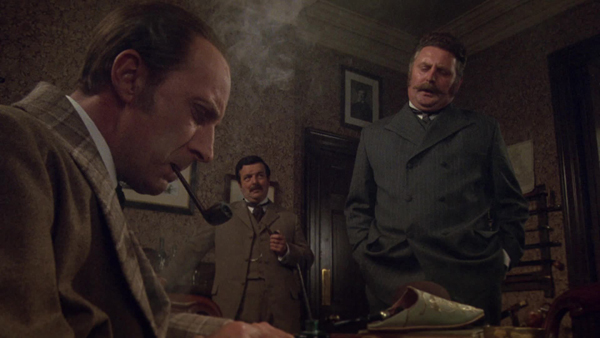 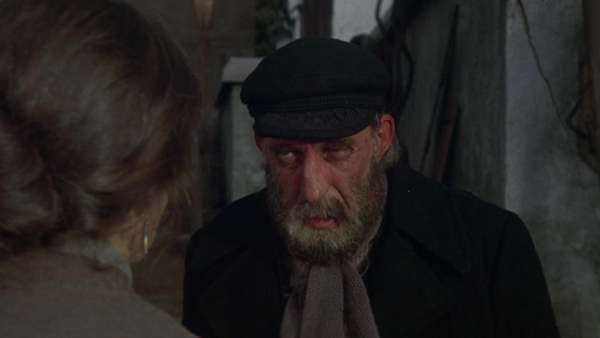 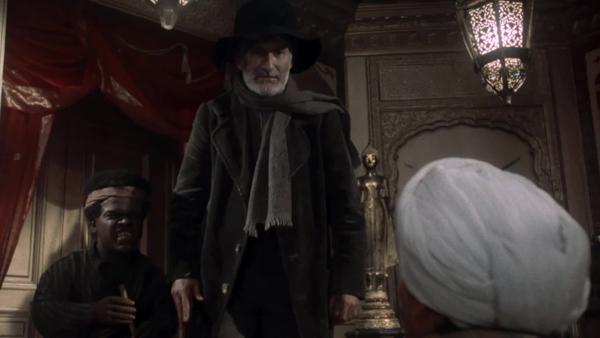 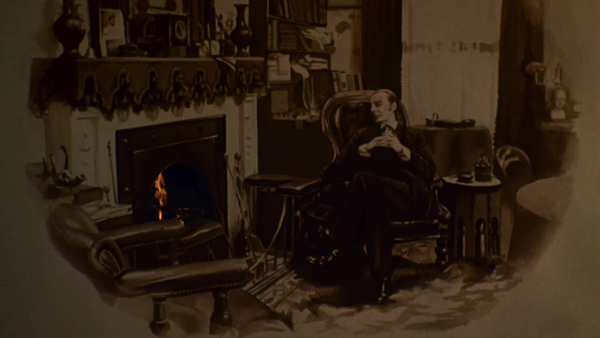