Steed! The Venusians! I told you! They’re here! They’ve landed.

The Avengers
5.4: From Venus with Love

Not the return of Venus Smith (although you can readily imagine the rumours a title like that would provoke today), From Venus with Love is the best of the season so far, which is to say the avenging business still isn’t quite on top form, but there’s a winning line in amiable quirkiness running through the proceedings. And, as an added bonus, it’s another of the series’ relative rarities that keep its cards close to its chest regarding who is doing what and how until quite late in the game.

It’s also further evidence of the makers’ Scooby Doo approach to magic, supernatural, or in this case, aliens this season, setting up apparent death by Venusians only to reveal the truth as rather more mundane skulduggery. Someone or something is killing enthusiasts for the titular planet, members of the British Venusian Society, their corpses left with bleached white hair and faces. And the only evidence of rum doing is a strange sound and a shiny orb diminishing into the distance.

The first victims are knocked off without much chance to get to know them – Paul Gillard’s Cosgrove, and Michael Lynch’s Sir Frederick Hadley – as, later, is Lord Mansford (Kenneth Benda, the Minister in The Claws of Axos). Mansford’s butler Jennings (Adrian Ropes) is notable for his passing resemblance to Chris Barrie.

Two more illustrious Venusiasts make a stronger impression. Jeremy Lloyd’s Bert Smith (“Actually, it’s Bertram Fortescue Winthrop Smythe. To be absolutely accurate“) is an instant hit, and like Alan Gerrard in 4.19: Quick-Quick Slow Death, you get the impression Rigg is genuinely amused in their scene together.

In a very Avengers turnabout, Bertram is a devoted chimney sweep, forced to go by an abbreviated name due to reasons of practicality and prejudice (“Too long to fit on a card and a terrible disadvantage in this business. After all, whoever heard of anyone having their chimney swept by a Fortescue Winthrop Smythe?“) His family have been up chimneys since William the Conqueror, astronomy being only his second love. Alas, he gets zapped when Emma is in the next room (“Even the soot was white“).

Steed: He died as he lived, in the thick of battle, bravely facing the enemy.
Mrs Peel: An enemy without a face.
Steed: Made some very funny noises.

Then there’s the only Doctor Who to appear in The Avengers (unless you count Peter Cushing and Richard Hurndall – no, I’m not mentioning Big Finish), Jon Pertwee as Brigadier Whitehead. We meet him recording battle re-enactments, a nicely involved bit of business as he roams the room cueing up sound effects records while he narrates. Appropriate for someone then best known as a radio performer.

Brigadier Whitehead: Would you like a drink?
Venus Brown: I’d rather have a contribution.

When chairperson of the society Venus Brown (Barbara Shelley – Sorasta in Planet of Fire, Plaxton in Blake’s 7 Stardrive, she was also in the final first season Avengers episode Dragonsfield) arrives, asking for more cash, the only thing missing is Pertwee telling her she’s in his eyeline.

Venus Brown: I am Venus Brown. You have beautiful golden aura.
Steed: Oh, how very nice of you to say so.

Suspicion naturally falls on the head of the Venusian Society, so it’s something of a surprise than neither Venus nor her henchman Crawford (Derek Newark, previously in 3.22: The Trojan Horse) have any involvement in the machinations at all. Steed indulges in some de rigueur flirtation (“We’re not composed of elderly eccentrics, Mr Steed” suggests Crawford; “I can see that” comes the admiring reply), and pretends to be wastrel (“Following father’s footsteps. He spent his life depositing money, I spend mine withdrawing it“). Accordingly, they’re instantly keen to have him on board (that they want to milk him for cash – to fund their space programme – only lends credence to their presumed guilt).

Primble: Excellent.
Mrs Peel: Not from where I’m sitting.
Primble: Ah, a sense of humour. Admirable.

If they’re more eccentric in motivation than personality, the true villain Dr Henry Primble (Philip Locke, 1.15: The Frighteners, 3.21: Mandrake) is the opposite, coming on as a bumbler who can’t find a dropped contact lens and proceeding to give Steed an eye test (a requirement for effective Venus spotting) based on his ability to recognised types of hat (“Trilby, homburg, ger-bowler, cap, jockey, porkpie, topper, boater, busby, fez“). Primble also shows a humorous streak when he captures and ties up Emma. The reason he’s doing this? His funding has been, diverted by The Cuthbert Foundation to the Society’s interest in the space project, and since he couldn’t beat them, he decided to destroy them.

Primble: And what are you doing here, Mrs Peel?
Mrs Peel: Well, I haven’t come for an eye test.

The reveal of the cause of the deaths (one victim is a dummy of Steed in a chair in the observatory), then, is more of an “Okay…” than anything you want to scrutinise too closely. Primble’s been sending a henchman about the countryside in a silver sports car equipped with a laser gun. A laser beam explaining the bleaching effect – including Steed’s bowler – and the boiling of liquid – including Steed’s beer. And how something can blast a hole through six inches of solid steel. The sound effect is much more impressive, an echoing, reverberating ricochet.

Emma is practicing her fencing when Steed enters with the “We’re needed” card pinned to the end of his brolly. The coda finds them invited to dinner by the British Venusian Society, in gratitude for services performed. It’s an unusual direct call back to the events of the episode; they are having dinner on Venus (“A table for two, overlooking the galactic sea“). Not the planet: a relief, since Steed’s claret doesn’t travel well. 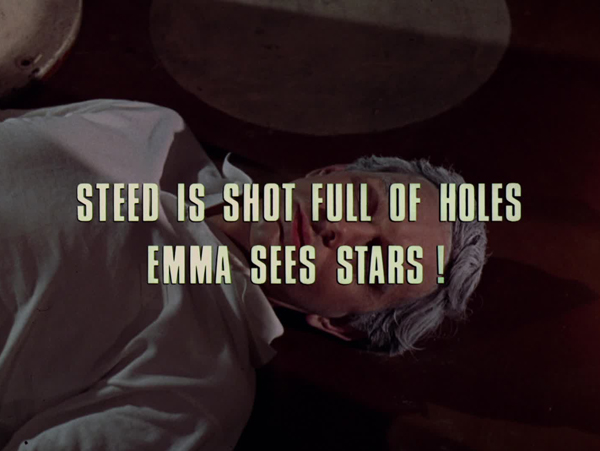 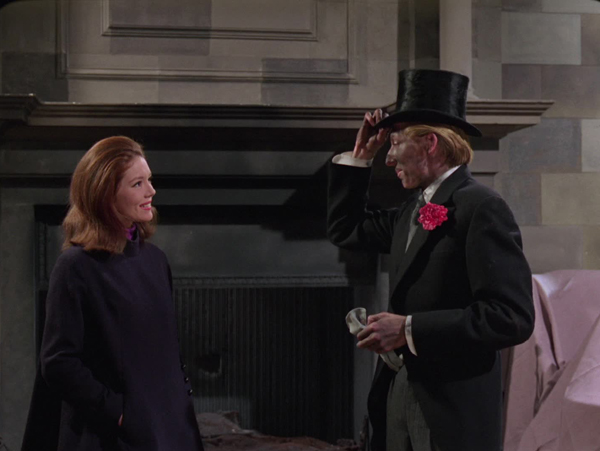 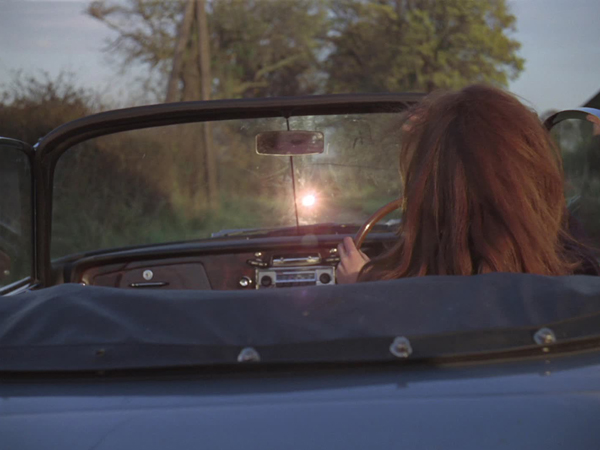 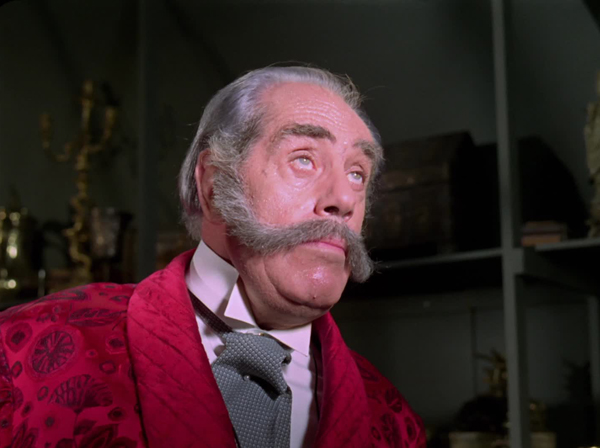 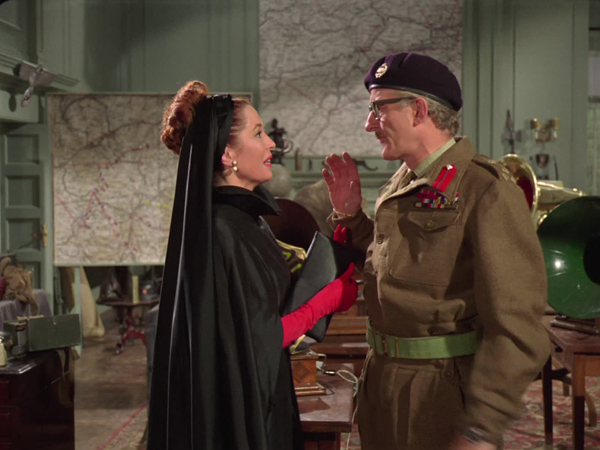 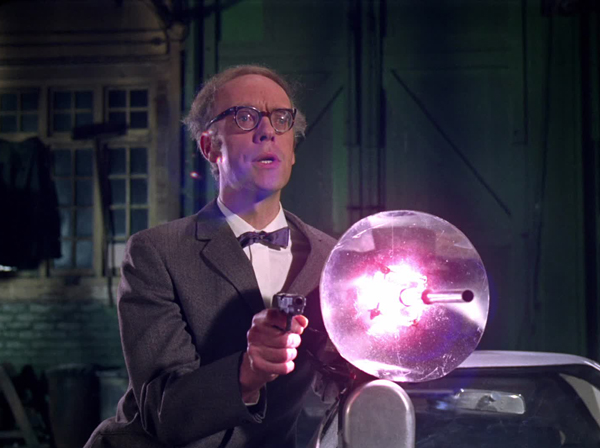 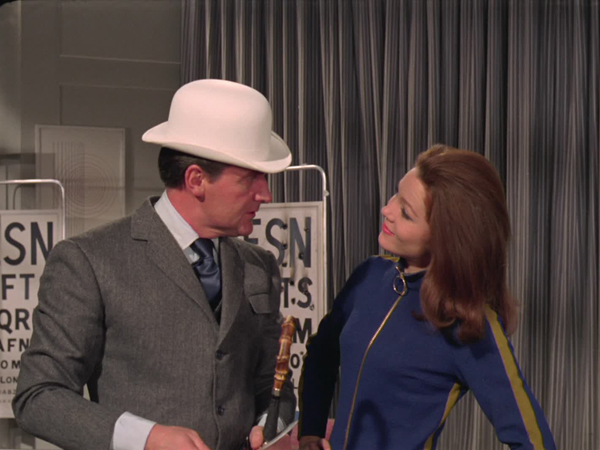