This is my only chance to assemble a disreputable past, and I’m going to take it.

Full disclosure: I don’t much care for the series’ excursions to New York, however canonical some of them may be. The studiously ropey accents, the same low-angle buildings doubling for the Big Apple, and the repetitive elevator conversations that grow wearisome quite quickly. They veer from the sense of time and place the series gets so right generally and cause too much distraction.

Bertie: I told them I was going to Manhattan and they came up with the goods.
Jeeves: No mention was made of a carnival or fancy-dress occasion, sir?

Bertie Sets Sail is quite faithful in outline to its source material, a 1916  short story (so only a year into Wooster’s life). It adds a shipboard prelude in which we establish Jeeves’ disdain for Bertie’s new hat (“I shall be the Beau Brummel of Broadway“) and one Tuppy Glossop, replete with doomed plans to be the sole British importer of the Spritz Polecat (alas, he only has the money to buy the one car).

Bertie: There, it doesn’t look at all bad, does it?
Jeeves: A violin case would complete the effect very creditably, sir.

As ever, Robert Daws’ Tuppy is a performance of explosive irritation and ignorance. He’s first seen here throwing a roll at Bertie, which proceeds to splatter the ship’s captain with soup on landing. There follows the upper-class equivalent of Del-Boy Trotter’s cultural delicacy:

Tuppy: Who’s the chap in fancy-dress?
Bertie: He’s the captain. Nice fellow. Speaks very good French.
Tuppy: Look, I’m terribly sorry, senor. Quelle fromage and all that. That’ll hold him. They love it when you speak the lingo.

Naturally, Tuppy is making a romantic fool of himself, besotted with Pauline Stoker despite being engaged to Angela. And inevitably, he makes a completed hash of things. In order to talk shop to her father, he brushes up on his cars with The Boy’s Book of the Automobile, and when he places his order (“Let’s start with four“), Pauline helpfully “explains” “Four Dozen, daddy“:

Tuppy: I couldn’t just order one car. I’d look such a fool.
Bertie: You’ll look an even bigger fool when you tell Stoker that you don’t want 47 of them after all thank you very much.

The result is the inveigling of Bertie into a plan to steal back Tuppy’s cheque, hinging on a burglar alarm Tuppy forgets to turn off. Which leads to the hapless Wooster being shot at by the police. Later, dining out with Tuppy, Bertie resorts to hiding under a table when the Stokers arrive, which naturally goes wrong (“Well, I was just looking for a spoon“). As approximations of the Wodehouse formula go, this is perfectly serviceable; it’s just a shame that neither Don Fellows (Stoker) nor Kim Huffman (Pauline) are a patch on Manning Redwood and Sharon Holm respectively in the previous season.

Also on the debit side, in terms of casting, is John Fitzgerald Jay as poet Rockmetteller “Rocky” Todd. There’s more Rocky in Episode Two, but suffice to say, the combination of a slightly wet character and an over-enunciated New York accent (I believe Kay is Canadian) makes the character positively irksome. No wonder Bertie can’t wait to get away from his retreat.

A retreat he’s forced on due to the behaviour of Wilmot “Motty” Lord Pershore (Ronan Vibert, unlike Jay, annoying in all the right ways). Wilmot has been foisted on Bertie by his mother, Lady Malvern (Moyra Fraser), while she tours US prisons for her book America from Within (that prisons are crucial to the climax is a fortuitous circumstance indeed). We first see Motty sucking on his cane, announced as a “strict vegetarian, teetotaller and devoted to reading” (Wodehouse’s view that abstinence can only be deleterious is nothing if not consistent); the second trait elicits a disbelieving “Good lord!” from Tuppy.

Bertie: Has he had some sort of dashed fit or something? Jeeves, someone’s been feeding him meat.
Jeeves: Sir?
Bertie: He’s a vegetarian, you know. Probably been digging into a steak or something. Best fetch a doctor.

It turns out, however, that no sooner has Lady Malvern embarked on her tour than Motty’s embarked on his own: of New York nightlife. Discovered by Jeeves and Wooster with a stinking hangover, he announces “I drank too much. Much, much too much. Lots and lots too much. And what’s more, I’m going to do it again. I’m going to do it every night” on account of “This is my only chance to assemble a disreputable past, and I’m going to take it“.

The episode follows the short story to the extent that crucial events occur off screen, with Bertie returning (from Rocky’s) to discover Motty has been incarcerated, but it diverges in showing Lady Malvern coming across her son in prison. Jeeves’ ludicrously implausible explanation for his presence – even by the gentleman’s gentleman’s standards – stands as is, that he chose to go there to research her book:

Lady Malvern: I find that very hard to believe.
Jeeves: But surely, your ladyship, it is more reasonable to suppose that a person of his lordship’s character would go to prison of his own volition… rather than by committing some breach of the law which would necessitate his arrest

Unsurprisingly, given it’s straight from the source, this is the most effective passage of the story and culminates in Bertie unsurprisingly sacrificing his hat, only to learn it has already gone:

Bertie: Now Jeeves, that Al Capone hat of mine. Get rid of it, burn it or something.
Jeeves: I’ve already taken the liberty of disposing of it, sir.

Also of note in the line-up is New York sojourn regular Ricco Ross as liftman Coneybear (who takes delivery of Bertie’s hat). As an American actor living in the UK during the ’80s, he eked out a number of notable roles (Frost in Aliens, the Ringmaster rapping rubbish in Doctor Who story The Greatest Show in the Galaxy) and not so notable ones (Slipstream).

The character is well-intentioned, attempting to offer the perspective of a contemporary African American amid privileged New York society, but for that reason also seems rather on-the-nose, over compensating for the series’ exclusive whiteness by imbuing him with knowing moral superiority; plain good sense is identified as a fact of his race and so the effort taken by Clive Exton comes across as slightly patronising. 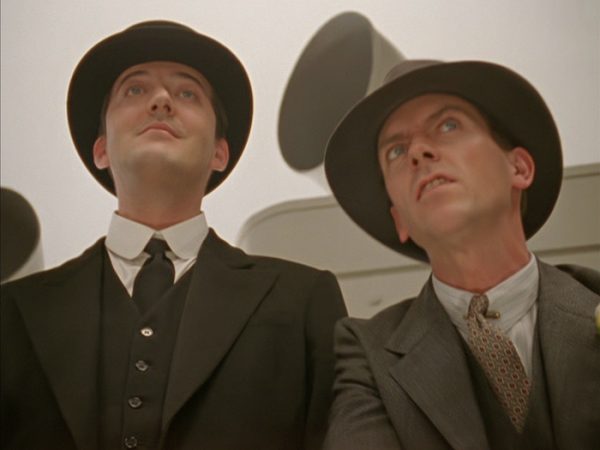 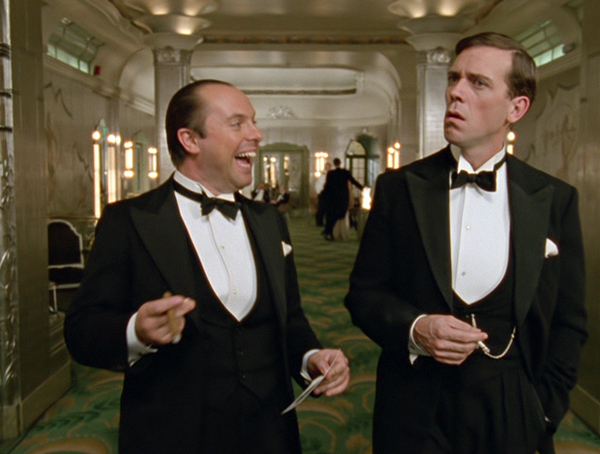 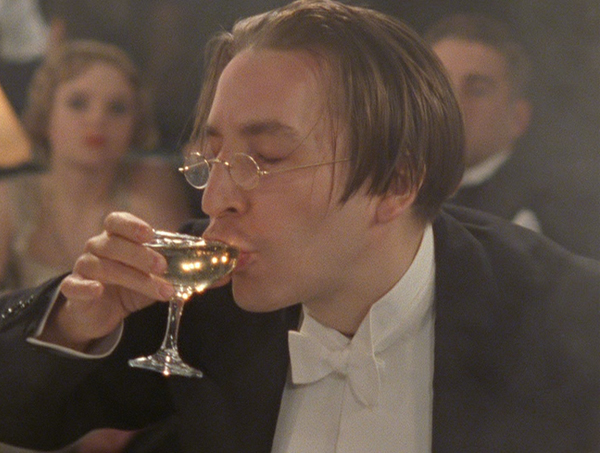 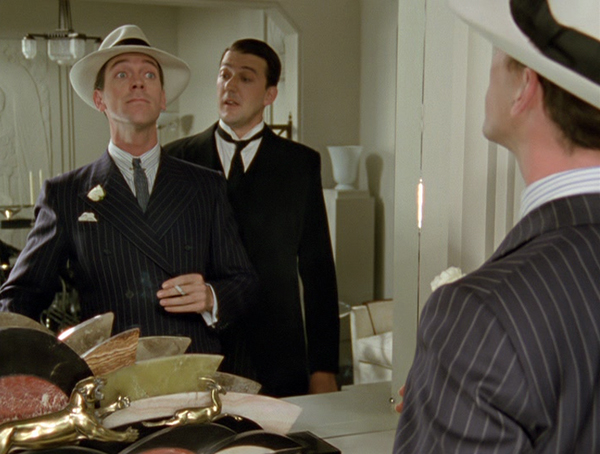 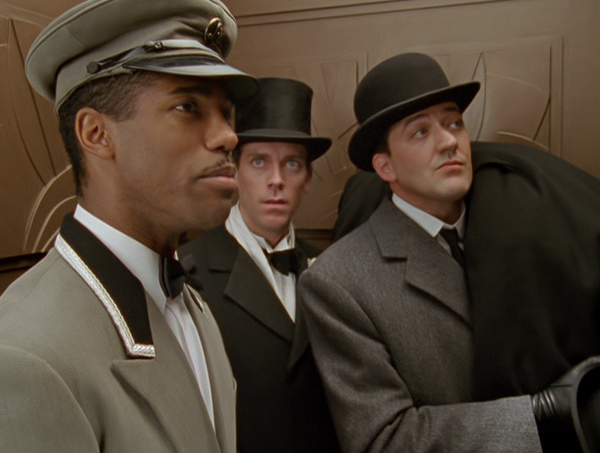 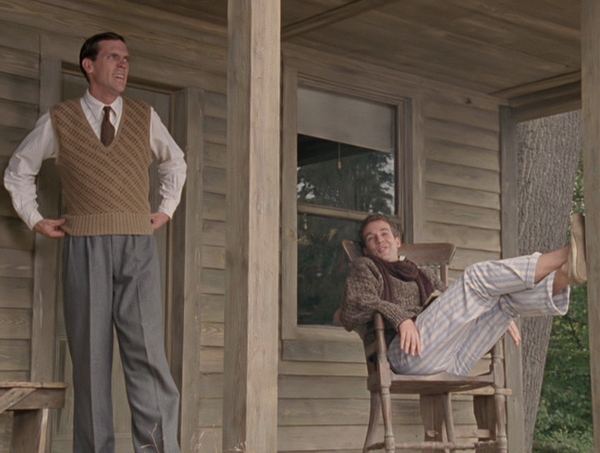 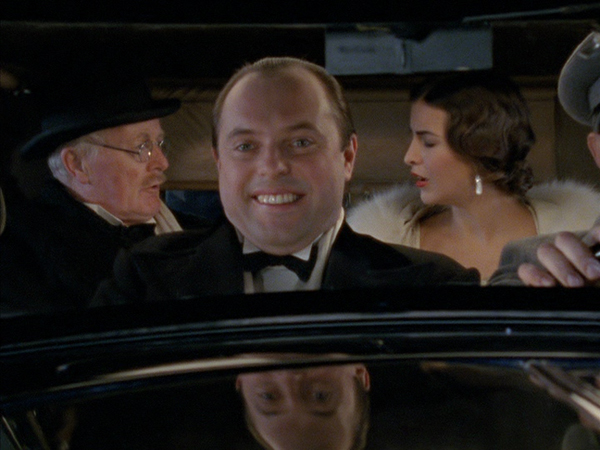 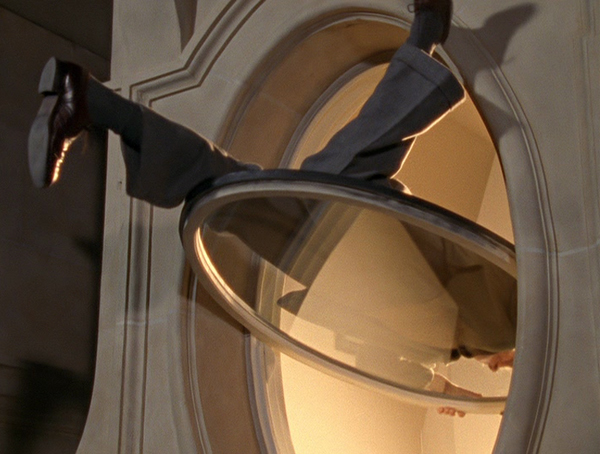 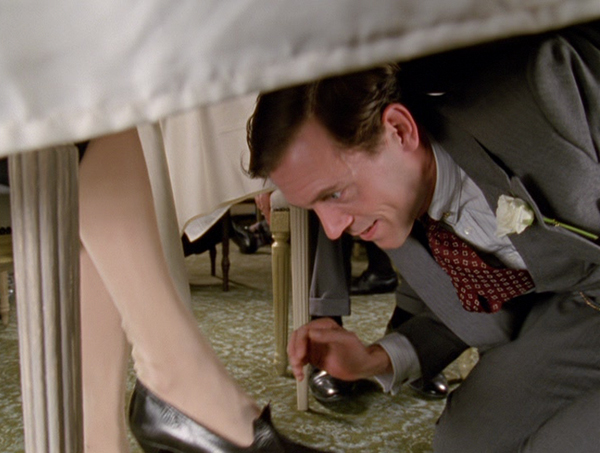 Jeeves and the Unbidden Guest (Carry On, Jeeves, Chapter 3)