The noblest parrot of them all. A master of rhetoric. Such a garrulous tongue. Such verbiage.

The Avengers
5.3: The Bird Who Knew Too Much

A step up from the first two below-par episodes, there nevertheless remains a pervading sense that Season Five isn’t yet firing on all cylinders. The plotting isn’t quite smart enough, even at its most playful, and the eccentricity is all a bit learnt. But The Bird Who Knew Too Much does at least move along at a pace, and features a couple of – well, one in particular – truly nasty psychopathic hitmen, which makes for a jarring but effective contrast when one of the characters is a bird enthusiast named Twitter.

It seems to take an inordinately long time for Steed and Emma to twig that Captain Crusoe, who is passing secrets from military bases, is in fact a parrot (or a macaw, to be precise) and even longer to confirm in unison “The parrot’s taking the information out!” (pigeons take pictures, which are described to the parrot, which just seems not very useful at all, but there you go).

Yet despite the arch trappings, killers Verret (Michael Coles, Ganatus in Dr Who and the Daleks) and Robin (Clive Colin Bowler) imbue the proceedings with a particularly sadistic streak. Much of that is down to Bowler’s performance, offering a portrait of the psychopathy of unbridled youth, as if anticipating the hippy dream gone awry.

At various points, he clobbers Steed and chloroforms Emma, before rigging a gun to go off at her when the next person enters the room (fortunately, Steed isn’t using doors this episode: “Lucky for you I’m a devious fellow“). Emma eventually makes much-deserved short work of him, throwing him into a swimming pool and giving him the bends, or strangles. Verret is the model of restraint in comparison, nearly doing for Steed with an exploding umbrella.

Steed: Frank Elrick. He was engaged on counter-counter counterespionage.
Mrs Peel: Well, somebody countered his counter. Where was this, er, found?
Steed: In a contractor’s yard, and just in time. In another hour or so… he would have been the cornerstone of a new supermarket. Poor old Frank. He was a pretty solid sort of type.
Mrs Peel: He still is.

There are also some creative deaths in Brian Clemens’ teleplay, (Roy Rossotti directed, his only such credit, aside from acting as second unit director on Doctor Zhivago), including Danvers (Peter Brace) being shot in the chest and spilling seed like Worzel Gummidge losing his stuffing, and Frank Elrick (Gerry Crampton) discovered preserved in cement.

The mastermind behind all this is the not-so-convincingly-misdirected Cunliffe (Anthony Valentine, of Colditz, Callan and the lead in Raffles). Meanwhile, his innocent associate Edgar Twitter (John Wood), the “organiser of this feathered array” is boshed three times by Steed and Emma for his troubles.

Twitter, despite the name, is decidedly not on the eccentric side, but it’s worth noting that Wood, who’s probably most recognisable as Falken in WarGames (and played Steed’s tailor in the ill-fated 1998 The Avengers movie), bears a marked resemblance to Benedict Cumberbatch in both appearance and poise. Wood’s good, making an unremarkable character stand out.

Professor Jordan: The noblest parrot of them all. A master of rhetoric. Such a garrulous tongue. Such verbiage.

Ron Moody is less memorable as Captain Crusoe’s owner Jordan than he was as Hopkirk in the previous season’s finale. Still, he gets to enthuse to Emma about his bird, a “parrot paragon” who can recite Hamlet’s soliloquy and Lincoln’s address, while showing her his training methods (“They think I am one of them“). Crusoe’s most memorable line comes courtesy of Cunliffe, though – “I demand political asylum” – until Emma shuts him up.

Steed: He employs models. Long-legged pulchritude with whatever face and posture they are wearing this year.

The episode also boasts a memorable interlude at the studio of Kenneth “Hopkirk” (Packard) Cope’s fashion photographer Tom Savage, which, like The Murder Market, finds debonair, dashing, throwback Steed offering groovy inspiration to the kidz (he’s been mistaken for a model, a squat, dark-suited number who arrives just as he is leaving).

Also around for this sequence is Samantha Slade (Ilona Rodgers, Carol in The Sensorites), who momentarily gives the impression she might be in on the plot, before Clemens decided not to bother making her a viable red herring. Most remarkable however, is Emma draped in Union Jack, enough to make anyone affectedly patriotic.

Steed comes in through a window three times, the first after an arrow whizzes into a wall and informs Emma, “Mrs Peel We’re Needed!” The second, to rescue her from death by hand gun. And the third at the end: a second arrow embeds itself in the wall (Emma wishes he’d get used to using the phone), as he tells her “I want you to meet a bird“, basted in red wine (“Haven’t shot it yet“). We’re firmly back in the mode of vehicular antics (as per Season Four) as Steed’s vintage car is stuck in reverse, but that’s nothing next to Emma’s extraordinary thigh boots and suspenders ensemble. A passable episode, with her attire or lack thereof easily its most noteworthy element. 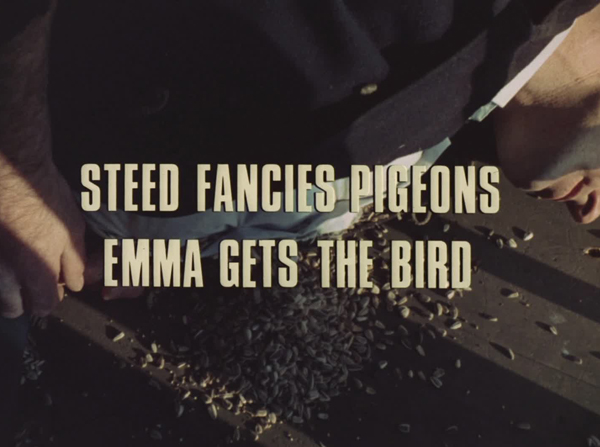 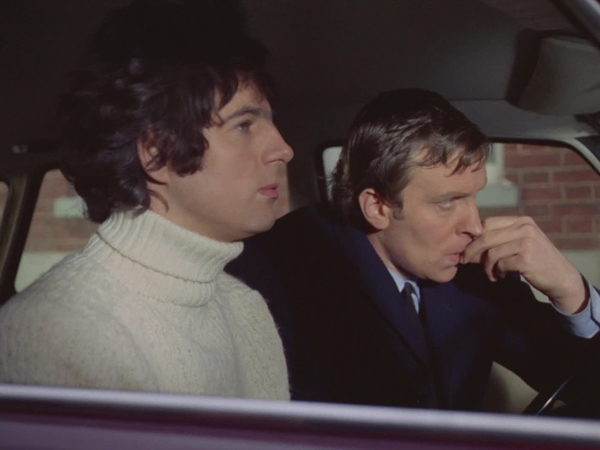 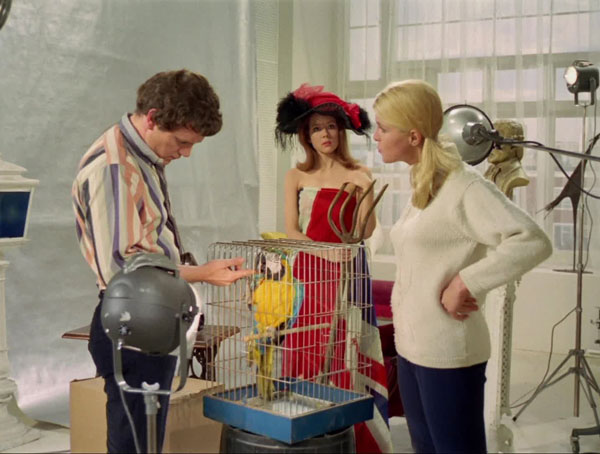 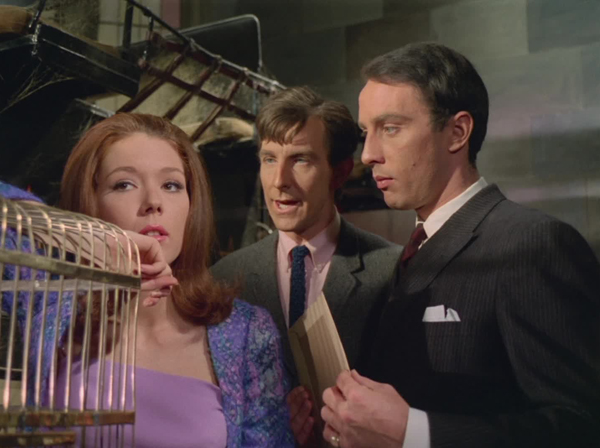 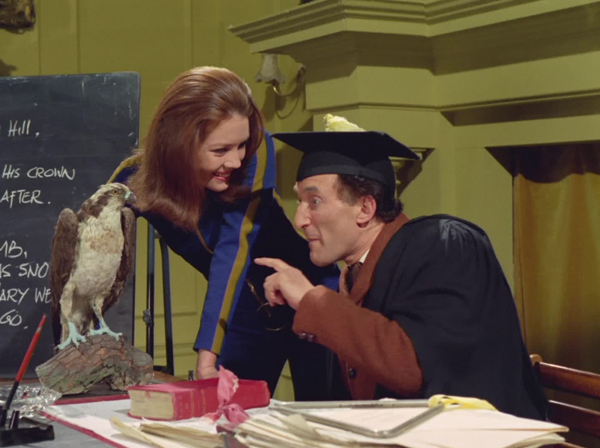 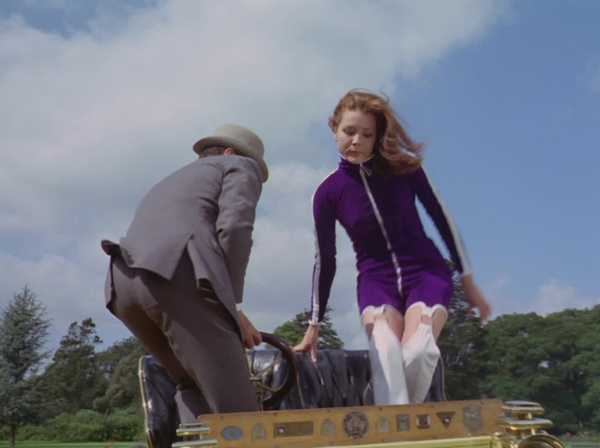