So, you want to go overseas. Kill some Nazis.

I suppose you have to give Kevin Feige credit for turning the least-likely-to-succeed-in-view-of-America’s-standing-with-the-rest-of-the-world superhero into one of Marvel’s biggest success stories, but I tend to regard Steve Rogers and his alter ego as something of a damp squib who got lucky. Lucky, in that his first sequel threw him into a conspiracy plotline that effectively played off his unwavering and unpalatable nobility. And lucky, in that his second had him butting heads with Tony Stark and a supporting selection of superheroes.

But coming off the starting block, Captain America: The First Avenger is as below par as pre-transformation Steve himself, and I’m always baffled when it turns up in “Best of Marvel Cinematic Universe” lists. The best I can say for it is that Joe Johnston’s movie offers a mildly engaging opening section and the occasional facility for sharp humour. For the most part, though, it’s as bland and impersonal as every other picture he’s directed.

Actually, that’s a little bit unfair, although you can only see Feige’s priorities in a cold, calculating light when he picked the journeyman director for the job. A little bit unfair, because Johnston’s debut, Honey, I Shrunk the Kids is a witty, pacy picture exhibiting a sense of fun and energy everything else he’s done – which includes filling in for buddy Spielberg on Jurassic Park III and replacing Mark Romanek on The Wolfman– lacks. It was reportedly his period work on The Rocketeer and October Sky that got him the gig, and there’s definitely a strong link between the former and Cap. Unfortunately, it isn’t a good one.

I well remember The Rocketeer being touted as one of the big hopes of summer 1991 (Premiere magazine certainly thought so, but then, they had Dying Young pegged as the season’s champ). And, if poster art reflected the quality of a movie, it would have been an all-timer. Unfortunately, it flunked the key test of bringing in audiences in droves. And that’s because it has many of the same issues Cap does; it’s flaccid, lacks engaging lead characters and completely fails to kindle that period buzz, charm and energy Spielberg made look so easy in the (first three) Indiana Jones movies. As a director, Johnston makes a very good art director.

Because Cap does look pretty good. The Arctic opening, leading to a flashback to 1942 Norway, is effectively atmospheric in a manner the rest of the movie lacks. Nevertheless, for all it has going for it in respect of bringing to life comic book iconography, Cap is singularly lacking a sense of adventurous fun, of revelling in its pulpy trappings. It’s as po-faced and unyielding as its lead character for the most part; Alan Silvestri’s score follows suit, with strains of the likes of Innerspace and Excalibur but absent the wit and playfulness of the first or the grandeur of the second.

Additionally, I’m very ready to admit I don’t get Cap. I don’t get his appeal. I don’t get why he’s supposed to be interesting. And I don’t care for Chris Evans’ performance (and I like Evans in pretty much everything else I’ve seen him in, so I’m assuming it must be the character). Even when the movie is considerably better – as the sequels are – I’m left unmoved by the main protagonist.

Guy beating on Steve:You just don’t know when to give up, do ya?

I’m clearly supposed to find Steve Rogers’ unfaltering positivity and dedication to serving his country inspirational, but I don’t. I find it faintly risible. On a purely practical level, the makerz also go a touch too far in making him super scrawny (six stone veers a little too strongly into fantasy territory to be convincingly rendered; his face should be emaciated as well as his body). The effect is a little akin to Marlon Wayans head superimposed on a dwarf actor in Littleman. And his transformation via the super-soldier programme, given the casualties we’ve seen (Bronsky, Schmidt), seems to be implicit – and ever-so-slightly worrisome – acknowledgement that it only yields the best results if one’s mind is as pure as one’s body will become (Steve really does embody the master race).

Senator Brandt: Jeez, will somebody get that kid a sandwich!

And lo, before you know it, Steve’s sporting a ripe pair of glistening man boobs. The bag of bones who uses his brain to win a flag and fearlessly jumps on a grenade – pass the sick bucket – is transformed into an icon of might being right and muscle being might. The problem of Rogers is he’s utterly unrelatable; he’s too assured of what he isn’t or what he is, without foibles and insecurities; he’s all surface. No wonder Tony will take the piss out of him constantly.

There’s the occasional bright spot post-transformation, such as Cap being used for propaganda purposes, selling war bonds and so sparking the genesis of his costume (“I’m a great fan of your films” greets Red Skull, about his only good line; despite Red Skull being an entirely rote villain, I find myself rooting for him because Cap is so insufferably moral). At other points, it feels like an opportunity’s been unforgivably missed (his war exploits with the marauders glossed over in a montage sequence).

Cap’s nearest and dearest are no more compelling than he is. Bucky Barnes (Sebastian Stan) goes from being the vanilla pal looking out for Steve to the vanilla POW who needs saving by him (before falling off a train – and we didn’t even get a chance to give a shit about him!). He’s never in danger of developing a character or becoming interesting, at least until he turns bad/brainwashed (and even then, he isn’t especially interesting).

Agent Carter (Hayley Atwell) is likewise a complete non-presence. How did she get a Marvel series out of this? Because she can kick guys’ arses and she’s a rare female playing with the boys? That’s usually a substitute for an effectively written role in the Marvel-verse (see also Black Widow). Also damagingly, there’s zero chemistry between Atwell and Evans, so his virginal standing up (“I had a date”) doesn’t feel like any kind of loss (and means that, when she eventually carks it, it’s based on a false premise of emotional investment in the character).

Dr Erksine: So, you want to go overseas. Kill some Nazis.

Stanley Tucci apparently took the part of Erskine, the benign German eugenicist – what’s the difference between a bad eugenicist and a good one? The latter works for the US Government –because he wanted to try out the accent. Which is as good a reason as any. Certainly, he’s had better roles in Michael Bay movies. Somehow, Hugo Weaving as Red Skull (at this stage, he was in the go-to-villainous place Ben Mendelsohn is now) entirely misses out on becoming a memorable monster. It seems like a no-brainer, but even scenes with Toby Jones (as Dr Zola) fail to come alive.

Arnim Zola: I don’t eat meat.
Colonel Phillips:Why not.
Arnim Zola: It disagrees with me.

That brings me to the one scene I like unreservedly, although it’s more about the actors than the content. Zola is captured and interviewed by Colonel Phillips (Tommy Lee Jones), and there’s suddenly a sense of the picture clicking into gear as a couple of pros do what they do best, sitting at a table and exchanging small talk. Notably, Cap is nowhere in sight.

Johann Schmidt: The Tesseract was the jewel of Odin’s treasure room.

While Cap is structurally forced to contrive to bring its superhero to the present day to become an Avenger (and thus quickly dispense with his litany of wartime exploits in order to set him up as a fish out of water), the movie at least doesn’t feel overly stuffed with paraphernalia setting up future Marvel-verse characters and instalments. Yes, Howard Stark appears, and apparently has some serious work done at some point if he’s to transform facially from Dominic Cooper to John Slattery. And yes, we get the Tesseract, and implicitly Thor. And yes, there’s the obligatory Nick Fury cameo, but the issues with Christopher Markus and Stephen McFeely’s screenplay (their first of six Marvel credits to date) are nothing a strong director couldn’t iron out. Really, this was Johnston’s to fluff, and he did.

Steve Rogers: I can’t get drunk.

Captain America: The First Avenger making just sixty percent of the first Iron Man’s gross isn’t only because of the charisma vacuum of Cap himself, or the issue of his national identity. It’s also because the romance has no fire, the conflict isn’t sufficiently personal, and the third act comes across as disengaged. But mostly, it’s because Johnston does nothing to galvanise the proceedings. Someone with a sharper eye for the period detail, a bit more frivolous (so as to puncture Cap’s shield of nobility when necessary), a bit livelier, with a bit more personality (even if the latter is anathema to Marvel unless you’re James Gunn).

The First Avenger is rather flat, static and inert. It most resembles one of those lifeless ’80s fantasy cash-ins-that-failed-to-cash-in knockoffs (Krull), where big bucks were thrown at moribund material to negligible effect. Still, at least no one could say the next Marvel movie lacked personality… 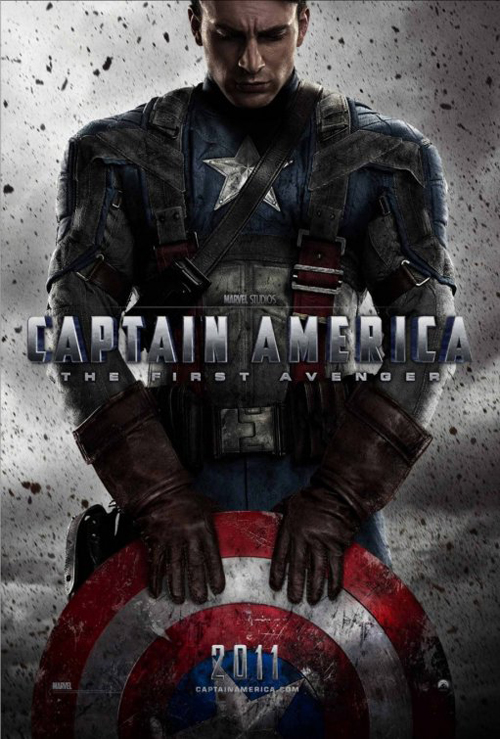