You yell “Shark”, we’ve got a panic on our hands on the Fourth of July.

I decided to revisit Jaws, principally because I was intent on tackling the mostly maligned sequels, and it didn’t seem right to omit the genuine article. And also, because it’s never a chore to watch one of Spielberg’s very best movies, made before he began second-guessing himself and imposing peer-review conditions on form and content. The way I see it, there’s the ’berg before E.T. the Extra-Terrestrial and the ’berg after E.T. the Extra-Terrestrial, and I’d opt for the former over the latter any day.

Untold reams have been written about Jaws, and will continue to be, a movie that changed the cultural landscape, giving birth to the modern blockbuster while repositioning the wunderkind boom of the late-60s towards popcorn pictures, just in time for the empty ’80s. What’s most interesting about the movie, though, is the manner in which it straddles both crowd-pleaser (that score; that effortlessly assured building of tension; not even seeing the shark until an hour in – even if necessity was the mother of invention) and the kind of character piece the period had been hitherto best known for.

Indeed, while Spielberg and Lucas have in common believing their most legendary movies of the ’70s were complete disasters – as a prelude to two of the biggest, record-breaking pictures ever released – as well as mutual fingers on the pulse of what audiences wanted (as long as it wasn’t comedy), they diverged significantly when it came to their treatment of character and theme.

And lest you think that was a flash in the pan for the ’berg, he’d show similar aptitude in his next picture, the first of his friendly-aliens (friendly-Grey-aliens) propaganda pics, Close Encounters of the Third Kind. But if his ’70s E.T.s are benevolent, in contrast (mostly) to their 1950s cousins, the authorities in both Close Encounters and Jaws are not to be trusted.

They keep secrets from the people, fail to act in their best interests and act with impunity and an exemption from consequence. On one level, this can simply be pegged as a reflection of post-Watergate distrust, but it goes deeper, at very least to the JFK assassination and the first publicly voiced chink in the American Dream.

In Close Encounters, the protagonist at the mercy of the government is simply an everyman, but in Jaws he is more dynamically established as an upholder of law and order; he’s on the inside, part of the system, learning how corrupt it is first hand (you can do that once, but as the producers of Bond and Mission: Impossible haven’t learned, putting your hero outside the law because it’s what they think the public expects, since they no longer trust the system, can only go so far before it seems faintly risible).

So the Mayor (Murray Hamilton, masterfully pulling off a very loud suit to match his broad duplicity) is willing to do the right thing as long as it doesn’t affect Amity’s summer business. The rest of the town – aside from the grieving mother, pointedly taking it out on Brody (“You knew all those things, but still my boy is dead now”), who let himself be manoeuvred and fair cops to it – want to hear what the Mayor wants to tell them. It’s their livelihoods on the line.

Spielberg doesn’t need to labour the point about the politics the way he did so mawkishly with this year’s Best Picture nominee The Post (Jaws, lest we forget, was also nominated for the top prize); that’s why his best foot forward was always nursing such thematic material in mass-appeal entertainments. Tackling them head-on revealed, usually, that he didn’t have very much that was erudite to say about anything, telling us more about his insecurities and pretentions to intellectual acceptance than the earnest subject matter he nominally tackled.

There’s a looseness and authenticity to the interactions in Jaws that seem to come from a completely different guy to the one who had matured into a formula filmmaker by the ’90s (be that blockbuster formula or Oscar-bait formula). He’d never truly recapture the domestic interplay in these early movies, post-E.T. (witness how engaged he is with, and how engaging it is attending, Brody’s home life, in particular the scene where Hooper calls by with booze). There’s even cross-conversation during scenes; anyone would think he thought he was Robert Altman!

It goes without saying that Scheider, Shaw and Dreyfuss are superb; the latter two, in particular, are probably the best they’ve ever been, before or since. Just how did Dreyfuss age twenty years in ten, between Close Encounters and Always? Coke, probably. The actors’ off-screen antagonism only serves Quint and Hooper’s relationship during a second half that segues effortlessly into a buddy-rivalry shark-hunting movie. It’s the man of science versus the man of instinct, with the lawman left to mediate between them.

Everything everyone says about how great the prize scenes are is true, from Quint and Hooper comparing war wounds over a bottle, to Quint’s USS Indianapolis tale (courtesy of screenwriter Carl Gottleib, Shaw and John Milius), but I particularly love Quint’s taunting (“You’ve got city hands”) and Hooper’s Popeye impression. And the touch that Quint affords the inexperienced Brody the respect due to the head of the expedition while giving Hooper none.

There’s also the masterstroke of, if you don’t want your plot-logic contested, putting a madman in charge (Quint smashes up the radio, leaving them to face the shark alone, because he’s a nutter). The only aspect of Brody I don’t quite buy into is “Martin hates beaches”; it’s a bit on the nose, truth be told, that he also has to conquer his fear of water.

You get a lot of theses analysing what the shark represents, just as they do the trio symbolically, but mostly, the shark offers the comfort of a tangible, verifiable foe, one who deserves everything it has coming. In that sense, it links to the decade’s biggest prior hit, The Exorcist (the devil also deserves what he gets). So too, both feature professionals (priest, shark expert & salty old sea dog) brought in to rid the world of a menace to innocents. Quint is very different to Max von Sydow’s Merrin, but both operate on a similar level narratively (the seasoned veteran is compelled to die in both).

And in terms of genre, they aren’t so far apart; Jaws is, essentially, a family horror movie, just as Poltergeist would be seven years later. The shark is the boogie man (or fish), and it’s notable that the first victims are punished for would-be sexual transgression. Jaws thus prefigured the slasher genre (like John Carpenter’s the Shape, Brodie’s bullets have no effect on the monster).

As solid as the performances and character work are, and as audacious as Williams’ score is (although, as notable on revisits is the often deceptively jaunty incidentals he uses to distract from the danger), the reason Jaws succeeds is all Spielberg’s technique. Those wipes as beach bums walk by Brody and we’re closer to his uneasy face each time, is just masterful. The death of the kid is all the more horrifying for its vagueness (what we see and don’t see). The way he engineers and increases stakes, just through Hooper’s reaction on examining a victim’s body. The appearance of the shark behind Brody as he spoons scraps of meat (and for all those mocking antics of the shark in Jaws: The Revenge, this one taking a flying leap at the Orca came first in setting the bar for daftness).

I came late to an appreciation of Jaws’ strengths. Which is to say, it wasn’t until revisiting it in the ’90s, having seen it as just a scary shark movie as a kid, that its estimable merits were brought home. It’s undoubtedly Top-Three Spielberg. The iconography of the brand has become cheapened through parody and replay (and inferior sequels), yet that only makes the picture’s continued effectiveness the more remarkable. It’s an exemplar of the cinematic virtuosity of its director. 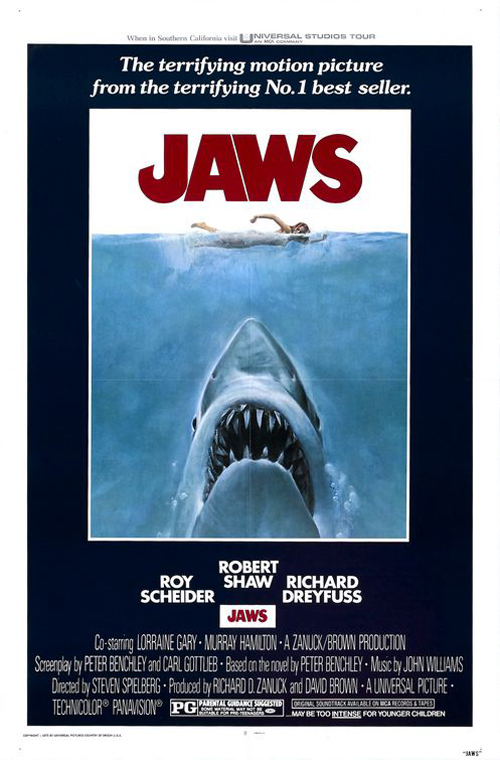