Being a luddite in my formative years (doubtless continuing to this day), I didn’t readily discern the qualitative difference between Jaws and Jaws 2 until much later. Indeed, in some respects, I think I found Jaws 2 more impressive. Well, the manner of dispatching the shark, anyway. That was, of course, nonsense (although, the dispatching of the shark is pretty good and is even set up with a Chekov’s Undersea Power Cable in the first act). But Jaws 2 isn’t a bad sequel, certainly in an age before such enterprises were awarded due respect and weren’t just cheap cash-ins.

During the ’70s, there were cheap cash-ins, increasingly cheap cash-ins even, that miraculously ended up being of some merit and displaying some thought behind them (the Planet of the Apes saga), but they were notable exceptions to the rule. That there was a The Godfather Part II, hailed as an instant classic, was bottom-line evidence of the exception that proved the rule, until The Empire Strikes Back changed the way sequels were perceived. Most common were sequels in the vein of Dirty Harry’s, where all the style, attitude and character work that made the original so potent were diluted into a weak sauce of anonymous directors, mediocre screenplays and budgets spent largely on coiffuring their star rather than the material.

On the one hand, Jaws 2 wasn’t a cheap sequel – estimates have its price tag at $30m, shockingly not far off the upper-end figure for Empire – but on the other, it came with a broke-backed attitude to the talent. There was continuity, naturally – Roy Scheider returned as Martin Brody, as did Lorraine Gary as his missus and Murray Hamilton as the Mayor of Amity. John Williams encored on soundtrack duties, and Spielberg reportedly even considered a revisit during a brief weekend of contemplation, when the production was in its most dire straits (original director John D Hancock was dismissed after a month of filming, and original screenwriter Carl Gottlieb was brought back to do a rewrite, all of which fuelled the spiralling costs).

Alas, the man they eventually picked was Jeannot Szwarc, competent when he wasn’t working with the Salkinds (Supergirl and Santa Claus: The Movie are both much less than that), but you’d be forgiven for thinking Universal were cutting back in the one area where they especially needed someone inventive (after all, that was exactly what saved the first one). Hancock had won the sequel thanks to Let’s Scare Jessica to Death. As Kim Newman notes in Nightmare Movies, this was “on the strength of his scary swimming scenes” in that picture, but “he was fired when he tried to duplicate the ambiguous lyricism of Jessica rather than follow Steven Spielberg’s rollercoaster formula”.

As such, it’s the grim conviction of Scheider’s performance that provides the movie’s slender emotional grounding. Brody’s at his best during a sterling scene midway through where, convinced a shark is back and on the prowl, much to everyone else’s predictable indifference, he mistakes a school of blue fish for a toothed menace and begins firing his gun. Pegged as The Brody Who Cried Shark, he gets the heave-ho (“I’ve never been fired before”).

At which point, he rather dwindles from view until the final reel, when he shows up to save the day and makes a bit of a pig’s ear of it. Much of the intervening period comprises teen antics, making it, as a number of recent reappraisals have noted, something of a proto-slasher flick (although the shark isn’t merely taken with nubile teens).

Like many of that sub-genre, the unmemorably misspent youth are also largely unmemorable potential shark fodder.  Keith Gordon, in his first movie, and beginning a string of strong performances that would find him working with De Palma and Carpenter, is the only one with any presence. We don’t much care about Brody’s imperilled offspring (the older of whom in no way looks like he’ll turn into Dennis Quaid in a few brief years), and the girl who gets chomped saving younger son Sean might have been more affecting if she’d been given a line or two in the ninety minutes prior to her demise.

Still, there are some notable demises, if more for ridiculous than dramatic reasons. When a mother manages to burn herself to death, in an attempt to ward off a shark by pouring fuel all over herself and setting off a flare gun, you half expect Nordberg to surface in the boat alongside her. The shark is left merely scarred from the encounter, lending him an appropriately gnarly quality. Later, when he’s menacing the gang of feckless teenagers, out near Cable Junction, he only goes and takes on a coast guard helicopter intent on rescuing them. And only comes off best from the encounter. Awesome!

Jaws 2 was notably released during the same summer as Joe Dante’s Piranha, particularly so, as Universal considered taking out an injunction against the latter on the grounds of being a blatant rip-off. As it was, however, the studio had the drop on New World by nearly two months, and there was a powerful advocate in Dante’s corner: none other than Spielberg, who liked the picture and would eventually secure the fledgling director gigs during the ’80s. Universal needn’t have worried, as their prize exhibit made $300m at the US box office. Nothing to be sneezed at and only put in perspective by its predecessor’s almost $1.2bn (both figures are inflation-adjusted).

While they may not have produced a great movie, the studio did a first-class job selling it, with a poster that tops the original (the gigantic-shark behind the water skier) and one of the all-time great taglines (Just when you thought it was safe to go back in the water…)

For a spell, Jaws 2 was the all-time top grossing sequel, but an era was on the horizon when sequels would become the lifeblood of studios, rather than simply a means of churning out makeshift, disposable knockoffs; Rocky II would supplant Jaws 2 the following year, and Empire the year after that. As for Universal, they continued their milking-it approach to the franchise, albeit it took them a rather belated five years and a then-resurgent horror device, 3D, to coax another apex predator bashfully out of the shallow end. 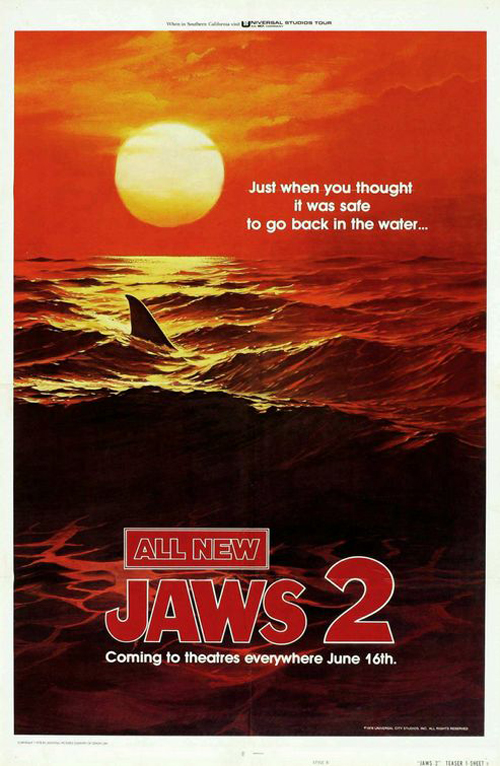 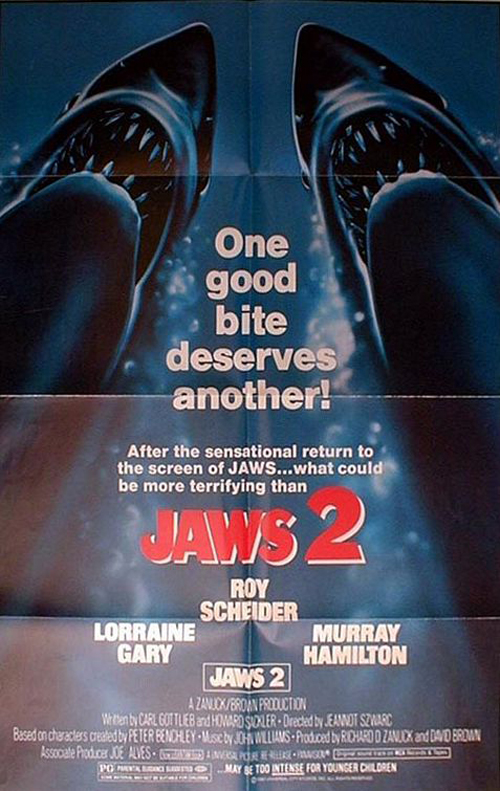