How am I supposed to put my hands in the air with my head on the floor?

I was mildly enthused by the trailer for Game Night, as it had the look of a somewhat irresponsible, slightly anarchic mainstream black comedy, one less reliant on gross out (naturally, there’s some of that) than twisted plotting and unapologetic displays of amorality in its characters. In fact, it toes the line much more than it doesn’t, right down to delivering pat life lessons, but John Francis Daley and Jonathan Goldstein’s movie is still a cut above for such fare.

Surprisingly, Jason Bateman hasn’t essayed one of these leads in a few years, but his brand is so patented – deadpan stoicism in the face of excruciating embarrassment – that Game Night fits right in (the duo also penned Bateman starrer Horrible Bosses 2, and half of them the first Horrible Bosses; here, they rewrote Mark Perez’ screenplay, he of Herbie Fully Loaded fame).

Which may be a disadvantage, as for all its relative bravado and flourish, the picture frequently reminds you of other fare treading similar ground, and you don’t really want a long trail of déjà vu following you. Originality is hard to come by in any genre, of course, but even the title begs comparison with David Fincher’s (weakest?) picture The Game, in which a wayward brother purchases his uptight sibling a real-life, real-stakes reality show adventure where (the idea is) the audience isn’t sure what is real and what’s fake. That picture fizzled on the basis of a premise so loaded and unlikely, even the usually unflappable Fincher couldn’t imbue it with conviction (despite many excellent sequences). That and its entirely obnoxious denouement.

So there’s some of that. There’s also a strong whiff of underrated late-stage Bill Murray comedy – back when he was still content to make crowd-pleasing Hollywood comedies, rather than flexing as a full-time indie darling – The Man Who Knew Too Little. It was, indeed, his final movie of that ilk. There, Murray’s character is convinced by his brother – oh look, that conceit again – to sign up to an improv theatre group’s interactive crime drama. Murray, of course, becomes involved in an actual plot, the key to his success being his obliviousness to the danger he’s in. There’s quite a bit of that in Game Night, as Daley and Goldstein alternate between the game participants light-heartedly believing everything is a big ruse and becoming convinced they really are in danger.

Max (Bateman) and Annie (McAdams) host weekly game nights, of which they’re habitually the proud, simpatico winners. Routinely joining them are dense stud Ryan (Billy Magnussen, offering a note-perfect depiction of a complete idiot) and whichever bimbo he’s brought along, and childhood sweethearts Kevin (Lamorne Morris) and Michelle (Kylie Bunbury). Not invited is next door neighbour Gary (Jesse Plemons), an overly serious cop obsessing over his ex. Plemons delivers possibly the standout turn, and all knife-edge, placid imperiousness – his The Green Mile Pictionary is the best movie use of the game since “Baby Fish Mouth” in When Harry Met Sally.

The only thorns in Max and Annie’s perfect set up are their trying for a baby (unsuccessfully, and likely Max’s problem, as Camille Chen’s Dr Chin indelicately stresses) and Max’s brother Brooks (Kyle Chandler), the more successful, handsomer, just plain better-liked sibling who constantly belittles and demeans his brother whenever he visits. As he does here. Brooks is an arse, and also the instigator of the movie’s game night-with-a-difference.

Daley and Goldstein are largely successful in navigating the various shifts in tone and emphasis, even if the B-plot character arcs are strictly pedestrian: Max must overcome his reluctance to have children; Ryan admit to his interest in a woman of intelligence – Sharon Horgan’s Sarah; Kevin sort out his jealousy over Michelle’s fling when they were separated that one time before they married.

In particular, Michelle can’t help looking like a complete moron when it’s revealed the guy she slept with, whom she believed was Denzel Washington, patently was not. There’s also a problem that Brooks isn’t remotely likeable despite himself – Chandler fails to pull that off, alas – so rather than finding it amusing that the wily rogue makes a mint from selling the witness-protection-programme list, we rather wish he’d received his comeuppance.

Nevertheless, the set pieces are first rate and show a versatility from the comedy directors (who previously helmed Vacation) that bodes well for their upcoming – until they exit, like so many have before them – DC’s Flashpoint (Warner Bros likely has their own version of the success of the Russo brothers with Marvel in mind, since they also came from a comedy background).

The initial establishing of the game, courtesy of a cameo from Jeffrey Wright, as the group obliviously eat cheese while Brooks is (kind of) genuinely beaten up, is a tour de force. As is the search for a Fabergé egg in criminal Danny Huston’s house, while “Eyes Wide Fight Club” proceeds in the basement. During which, Magnussen steals the best moments as he blithely decides to lift the prized object from an open safe. Other highlights include Max bleeding all over Gary’s dog and only making matters worse when he tries to clean the mess up, and a particularly grim bullet extraction – using Chardonnay to clean the wound – only to discover it passed straight through Max’s arm. And a running glass table gag.

The chemistry between the cast – particularly Bateman and McAdams – sells much of the unlikeliness of the proceedings, and there are enough twists in the plot – the reveal regarding Gary, only to refocus that reveal – that you’re kept on your toes; the idea that the whole thing might be a ruse is never completely banished, even given a trailer that spoiled a late-in-the-day pulverisation by jet engine. After all, The Game tried to explain away even more incredulous occurrences.

Cinematographer Barry Peterson has carved himself a niche in the comedy game but relishes the opportunity to provide a more noirish sheen this time. His skewed approach includes the occasional curious affectation, such as establishing shots that manage to make the locations look like toy towns or model villages.

I’ll admit I was hoping for something a little less cosy in the final analysis, as Game Night is really only playing at being edgy – Shane Black-lite, if you will – but Daley and Goldstein have put some solid effort in, which goes to explais the more generous than usual critical reception. The principal poster of choice sucks, though (not the ones here). 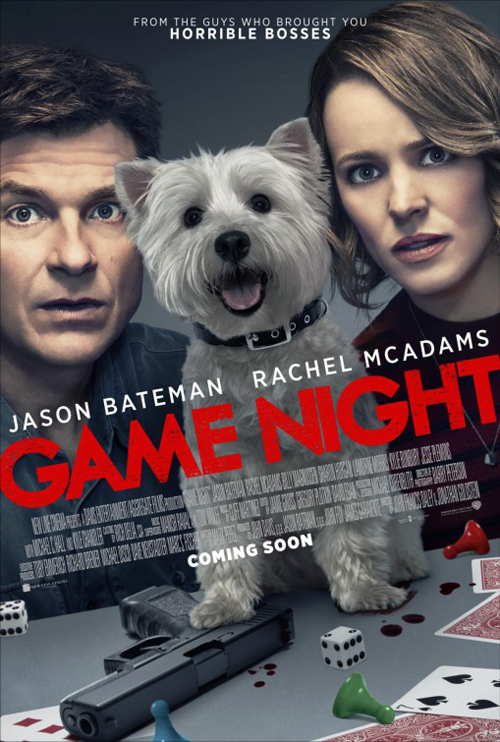