Confuse The Twilight Zone with The Outer Limits? DO YOU EVEN KNOW ME?

The X-Files
11.4: The Lost Art of Forehead Sweat

Can Darin Morgan just write every episode of The X-Files? Even The Lost Art of Forehead Sweat, which teeters into the territory of the less than worthy of his talent in places by going for obvious targets – Morgan is generally signposted by his ability to do exactly not that – is leagues ahead of anything else in either this series or (mostly) the original.

Mulder: It’s the Mandela Effect. When someone has a memory of something that’s not shared by the masses, or the factual record.

As current age conspiracy theories go, the Mandela Effect is one of the leaders of the pack. And, being an intrinsically quirky theory, it’s entirely appropriate that Morgan should present it in his trademark intrinsically quirky, self-reflexive style. While it gets its name from the belief, as cited by Mulder, that Nelson Mandela died in prison, and includes such speculation as whether our internal organs, as per medical text books, are in different places from where they used to be, Morgan also references the more common idiosyncrasy of the effect, that it seems to weave its magic on innocuous pop-culture events, such as whether there was a ’90s movie called Shazam starring Sinbad (see also C-3P0’s never-used-to-be silver leg, or Jaws’ girlfriend in Moonraker’s lack of tooth-wear). Or Scully’s childhood love for Goop-O (did Fruit Loops change their name from Froot Loops?) Although, the latter is most notable for Scully continuing the season’s dubious taint referencing (“Lemon and lime tastes like leprechaun taint”).

Reggie: Were you followed?
Mulder: It would be a hell of a twist if it were Rod Serling.

And then there’s Mulder’s obsession with his memory of the first Twilight Zone episode,

(“But Mulder, isn’t you fake Twilight Zone memory also a Mandela Effect?”: “No, because my fake memory is real”) offered the altogether mundane explanation that, as the explanation would be with the beloved flawed memories of so many, that it was never an episode of The Twilight Zone at all; it’s from The Dusty Realm (ahem). That’s obviously the “wise’ conclusion of any rational-minded type taking a cursory glance into these waters, and one suspects it’s Morgan’s too, given he only really gives the thing a smidgeon of credit in a late stage gag.

Mulder: Maybe, this is simply evidence of a parallel universe.
Scully and Reggie: WHAT?

Morgan scrupulously avoids mentioning CERN, the holy grail of Mandela Effect theorists. Could that be because it’s already lined up for a devoted plotline (it is fairly irresistible)? But Mulder does kind of invoke it with his initial enthusiasm for a parallel universe answer to the conundrum (“We’re not going to do this parallel universe, sci-fi gobbledegook, nerd boy. Please, just drop it”).

Mulder: The Mandela Effect has been an Internet meme for almost a decade. It’s always been called that.
Reggie: Ah, you see, you’re having a Mengele Effect about the Mandela Effect.

The episode hinges on the testimony of one Reggie Something (Brian Huskey), in common with many Morgan structures required to tell shaggy dog stories (along with Dr They) in order to guide the narrative. He claims the government is trying to erase him from history, that he knows Mulder and Scully (or “Sculls”), and even that he actually started the X-Files (cue an amusingly re-jigged title sequence and clips from classic episodes, including the Pilot, Tooms, Clyde Bruckman’s Final Repose, Home, Bad Blood and, er Tesos Dos Bichos).

His path began while tracking down Dr Wuzzle books that he remembers being spelt Wussle (“No, I remember the logo being racist in a different way”), and he claims the Effect is named after Josef Mengele, because of the memory some have of his apprehension in Ohio in 1970.

That Reggie turns out to be Reginald Murgatroyd, who suffered a nervous breakdown through recognising that, by serving his country he was betraying its very ideals, is perhaps inevitable (Reggie witnessed a UFO landing in Grenada, and embarked on a series of government jobs, from US postal service, to IRS, to SEC, DoJ and CIA and DoD). But Morgan offers the sliver, in keeping with the work of Dr They, that Reggie is telling the truth, when Skinner arrives to see Murgatroyd driven away by the men in white suits (“Where the hell are they taking Reggie?”)

The problem is, the choice to make the Mandela Effect about Fake News is something of a misstep. Not that Morgan doesn’t hit some targets, but that he also launches at lazy, easy ones. This season has become overpoweringly overburdened by the weight of the Trump regime, whereas this is exactly the kind of show that shouldn’t take new incumbents so literally as exerting real power. Writer after writer is crying into their cornflakes for an America they don’t recognise any more, but the Morgan of old response would more likely be that it’s exactly the same one, just with a different set of obfuscators sticking their heads above the parapets.

Dr They: It’s a presentation of real facts but in a way that ensures no one will believe any of it.
Mulder: To what end?
Dr They: The bitter end.

Getting an almost unrecognisable Stuart Margolin (Angel in The Rockford Files) to play Dr Thaddeus Q They is something of a coup, and at least part of his pitch is astute, as it relates to Phoney Fake News: that the objective is to make anyone and everyone uncertain about what to believe any more.

Certainly, as this relates to the conspirasphere, not that you’re supposed to believe anything in such territory, it could never be more so. They makes a case for a post-cover-up, post-conspiracy age (“Po-co”) (“In the old days, I’d never have gone out and told you”) and Morgan takes up his own baton from last season’s Mulder and Scully Meet the Were-Monster when They informs Mulder his time has passed (“Time when people of power thought they could keep secrets”). It doesn’t matter what comes out when no one can be sure how much veracity any of it has.

Mulder: To be honest, I’m not believing any of this.
Dr They: Well, believe what you want. You’re only proving my point, you twit.

The idea of consciously manipulating the truth in order to slide subjects from the radar (“the gamut from holocaust denial to corporate product news. Products catch on fire, companies like G- spending billions to repress memories”) has a certain cachet, but Morgan doesn’t quite stick the landing, going from playful noodling to clumsily on-the-nose Trumpism that Carter might have written (“We’re building a wall” announce the aliens. Who no longer want to have any further contact with us because we lie. The barrel-scraping parting shot? “You’re free to explore Uranus”) Mulder’s summation of the situation is at least amusing (“So that’s the truth. We’re not alone in the universe, but not one likes us?”), but the last quarter finds some decidedly not-so-sharp writing.

FBI Agent: You start out a rebel. But then you get fat. The next thing you know, you’re deep state. It’s sad.
Mulder: Do you know who I am? I’m Fox Mulder. I was fighting the power to break conspiracies before you saw your first chemtrail, you punks. I’m Fox Mulder! I’m Fox freakin’ Mulder, you punks! I’m Fox Mulder! Fox Mulder!

Which is a shame, as for much of this ride, Morgan is delivering dynamite, from shots at Duchovny’s waistline to the explanation that no one gets probed by aliens anymore because of the Mandela Effect. And the clip from The Last Martian is a lovely little vignette worthy of Joe Dante’s Mant (“That ain’t a window. That’s a mirror”).

Mulder: I was out squatchin’.
Scully: Any luck?

Mulder: No, but that’s not the point. I just had to get away from the madness for a little while. It seems this past year all I’ve done is watch the news and worry that the country’s gone insane. I had to get out to nature, you know, where it’s simple and uncomplicated, where it’s just you and the elements. And possibly a cryptozoological, simian-like hairy humanoid with enormous feet.

So this is the rarity for me, the Darin Morgan episode that doesn’t get five stars. Perhaps he’s got fat. Oh wait… That would just be small potatoes to him. 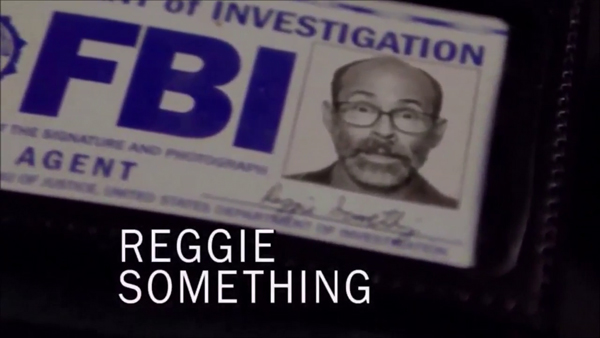 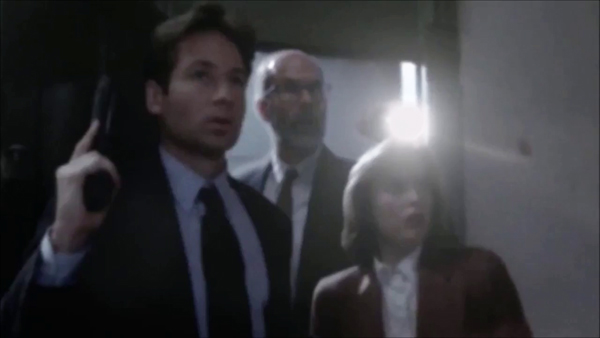 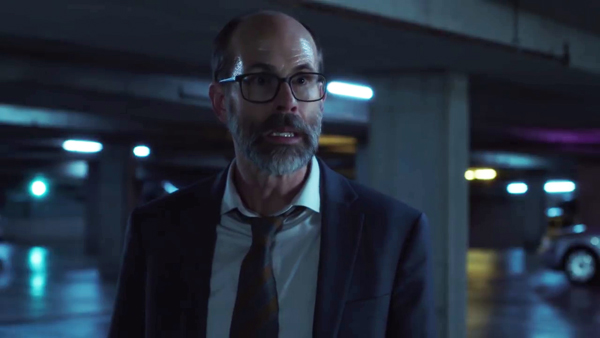 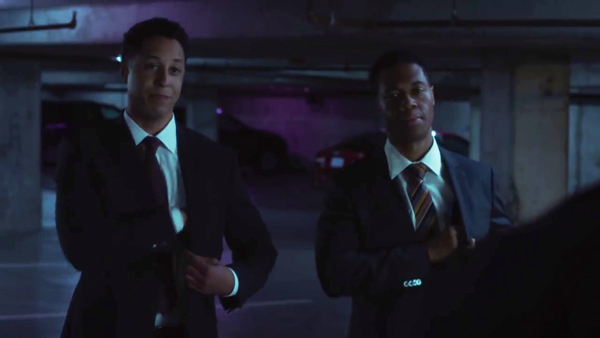 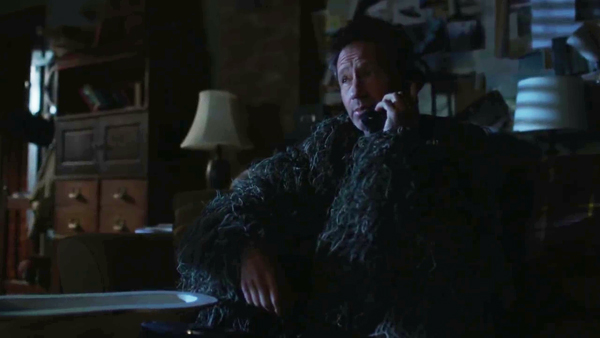 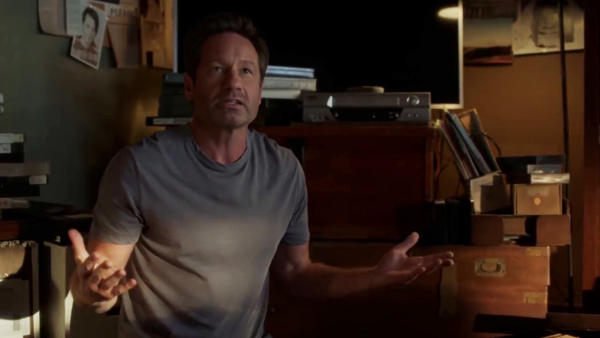 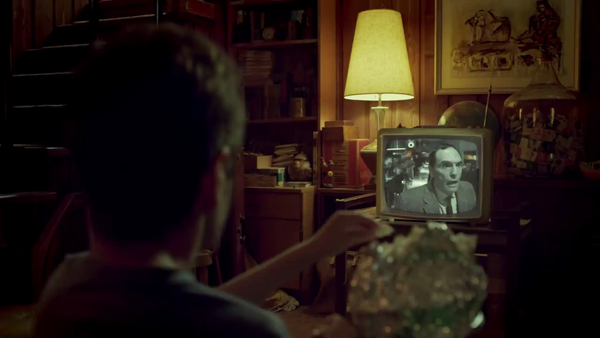 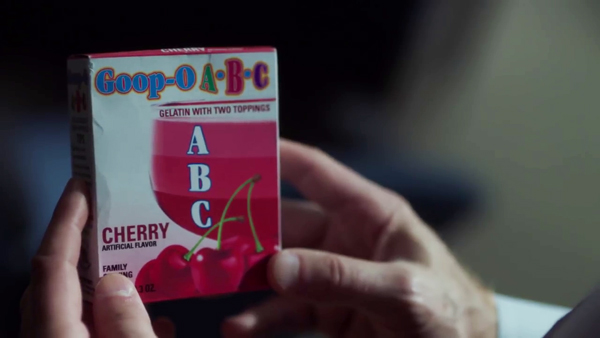 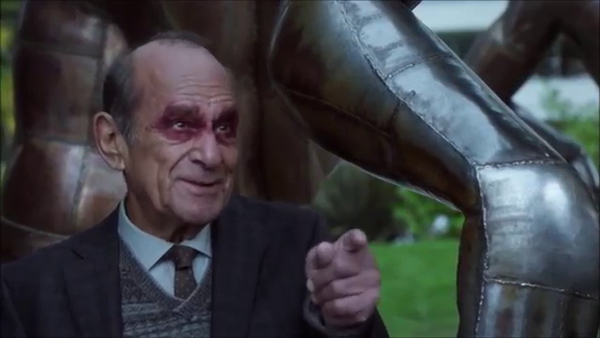 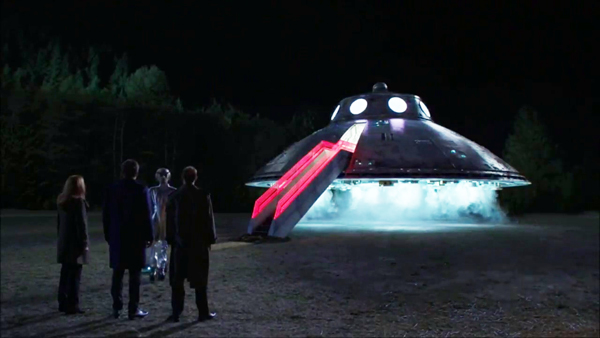