Like last year’s Wonder Woman, the hype for what it represents has quickly become conflated with Black Panther’s perceived quality. Can 92 percent and 97 percet of critics respectively really not be wrong, per Rotten Tomatoes, or are they – Armond White aside – afraid that finding fault in either will make open them to charges of being politically regressive, insufficiently woke or all-round, ever-so-slightly objectionable? As with Wonder Woman, Black Panther’s very existence means something special, but little about the movie itself actually is.

Not the acting, not the directing, and definitely not the over-emphatic, laboured screenplay. As such, the picture is a passable two-plus hours’ entertainment, but under-finessed enough that one could easily mistake it for an early entry in the Marvel cycle, rather than arriving at a point when they’re hard-pressed to put a serious foot wrong.

None of which matters to box office, which will far exceed anyone at the Mouse House’s wildest dreams by the looks of things, certainly putting the (relative) surprise successes of fellow less-than-sure-thing comic book properties Deadpool and Wonder Woman in the shade. Like those two, though, you’re rather left wondering where the great movie lay amid the overwhelming response. Ryan Coogler has penned all three of his features to date, but this one, on which he collaborated with Joe Robert Cole, seems to have escaped him. The basic premise is classically robust – a new king must defend his throne and land, overcoming challenges of confidence and interlopers – but the results are too often stodgy or under baked.

It’s actually surprising how ungainly the picture’s commentary is. Having set up a compare-and-contrast between “exiled” cousin Erik Killmonger (Michael B Jordan) and (King) T’Challa (Chadwick Boseman), the soundbites of angry young Afghanistan veteran Erik, scorning the isolationist pose of Wakanda at the expense of black people everywhere (else) and out for revenge over the death of his daddy, quickly become tiresomely one-note.

And that’s with Jordan giving it everything. While there’s fuel enough to make this a very different Marvel movie, it’s more defined by how remarkably formulaic it is; even the playful calling out of white oppression (“coloniser”) seems more manufactured than provocative. And you never quite know for sure, but I doubt Erik really wanted his last words to induce a collective groan.

I’ve read praise of how well Coogler and Cole provide for their wide cast, which may be true in terms of screen time, but only a few of them are allowed to become interesting along the way. Boseman’s been an arresting screen presence hitherto, but like Chris Evans, he comes a cropper when asked to play a simply-not-very-interesting superhero.

I had high hopes when T’Challa volunteered himself for a Bond-esque spy mission, complete with casino, but the sequence flickers and fades before devolving into an unenthused CGI-infused car chase. When T’Challa is thrown off a cliff by Erik, possibilities again presented themselves: of his struggle back from the brink. Instead, he’s merely revealed as having an ice-cold kip and requiring an herbal pick-me-up.

Lupita Nyong’o also suffers from underwriting, despite getting significant screen time (I’d hesitate to say she’s the love interest, but yeah, she is). Better served are Danai Gurira’s take-no-shit bodyguard Okoye and Daniel Kaluuya’s confidant W’Kabi, but too little is made of setting their relationship at odds over conflicting loyalties, particularly since this is parsed out during the de rigueur, underwhelming Marvel third act battle (this one complete with daffy rhino riding).

Forest Whitaker just seems to give up the will when showing up in blockbusters, for some reason (or perhaps it’s just that they’re not such great blockbusters). And I found Leittia Wright’s kid sister Q (Shuri) on the annoying side of cheeky. Which I shouldn’t have, as her performance is enthusiastic and upbeat, and a problem the picture has generally is that it’s severely lacking in playfulness or irreverence; it’s only really Andy Serkis bringing that side of the equation, for as long as he’s in the picture. Martin Freeman? Well, his American accent is better than Sherlock co-star Cumberbatch’s, but he might have the least interesting recurring Marvel role this side of Hawkeye.

Coogler did a great job with Creed, his graduation to studio pictures, but he continually fails to make the most of the further step up in scale here. One can almost sense he knows the comic-book genre isn’t his forte. The effects are frequently not very special (in particular, some very ropey digital doubles that could have walked off the virtual set of The Matrix Reloaded), the action sequences are at best competent, but mostly fail to come alive or thrill – Ludwig Göransson’s distinctive score does its best, but can’t bridge the gap – and the Wakandan politics are perfunctory and needed to be much more involved, grasping their sub-Shakespearian mettle for all it was worth to justify the time devoted to them; at times, it feels like you’re watching a rather inert ’50s or ’60s costume epic.

The vision quest/afterlife sequences are also disappointingly lacking in imagination, both visually and thematically (since they seem to consist of spending quality time with one’s dead dad; they may as well be bumping into ghost Dumbledore at a spectral train station).

The ritual combat/coronation set is, as Tom Paulin would say, awful, especially so since it’s fakeness is rubbed in our faces when we revisit it; one can almost touch the polystyrene rock face when one isn’t staring into the unconvincing studio sky. It’s unfortunate too that the crowd throwing in oohs and aahs and rallying cries awkwardly punctures, rather than fuels, the tension in two of T’Challa’s most defining scenes. Wakanda is very colourful, in an Afro-chic fashion, but cinematographer Rachel Morrison only fitfully makes it come alive.

There are also some excruciatingly bad setups, such as Erik happening to be approached at the Museum of Great Britain – what, what, what? The where? – by a director he just happened to have the perspicacity to poison immediately prior. Or Nakia very presciently choosing to take a look at the casino’s closed-circuit monitors at exactly the point Killmonger and Klau arrive.

There are bigger problems, though. Most of the interactions fail to click; there’s a lack of energy, engagement and depth of character. I much preferred the 1992 Oakland scenes with their respective parents to anything involving the main leads. Sterling K Brown as Erik’s father N’Jobu really needed a larger part (he stole the show in American Crime Story). The biggest issue with Black Panther is pacing, however. There are much less interesting Marvel films that have turned out better than this because they’ve flown along. Coogler never builds up a head of steam.

One area he does dive wholeheartedly into is the thorny problem of Wakanda’s isolationism. There was no way he could have avoided it coming up in critiques, so making it central to the motivation of the new generation of Wakandans is entirely appropriate, as well as encouraging a degree of topicality. Like the characterisation, though, the delivery is in so prosaic that T’Challa all but proclaims “I will not be like Trump”.

That said, I’m curious to see how drastically the olive branches offered at the end of the movie alter the Marvel-verse. After all, Wakanda has seemingly awesome science that ultimately means no one need die (at least, until their bodies wear out). Unless, of course, The Powers That Be intervene and mess things up in proliferating it to the rest of the world. All that Centauri tech doesn’t seem to have visibly altered the lives of the average person for the better, after all.

Indeed, Wakanda may be the most technologically advanced society, but it clearly leaves itself open to other questions over its running. Like Asgard, power is wielded by birthright or through violent challenge. Added to which, it’s an advanced society with the equivalent of barcoding for everyone, which can’t be good. Generally, despite the layering in of tribal factions, there’s very little sense of how this place functions; it seems built on aesthetics, rather than logic. You can get away with that on Thor’s godlike plane(t), but I didn’t get much more from this than cool aircraft cruising over a retro-futuristic cityscape.

So yeah, I thought Black Panther was merely okay, which is nigh-on damning for a Marvel movie. The last one like that was Ant-Man and that at least had the toy train sequence. Doubtless Kevin Feige will be intent on securing Coogler’s services for the Black Panther 2, but I’d rather see him pursue something more attuned to his talents. 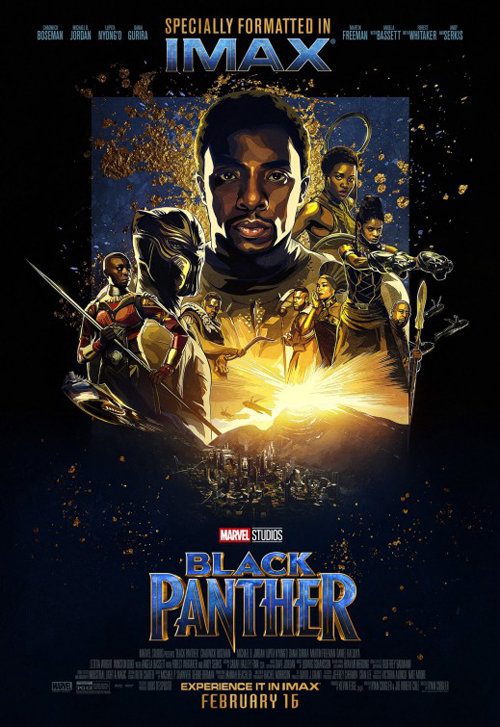