He’s a wild creature. We can’t ask him to be anything else.

The faithful would have you believe it never went away, but it’s been a good decade since Guillermo del Toro’s mojo was in full effect, and his output since (or lack thereof: see the torturous wilderness years of At the Mountains of Madness and The Hobbit), reflected through the prism of his peak work Pan’s Labyrinth, bears the hallmarks of a serious qualitative tumble.

He put his name to stinker TV show The Strain, returned to movies with the soulless Pacific Rim, and fashioned flashy but empty gothic romance Crimson Peak (together his weakest pictures, and I’m not forgetting Mimic). The Shape of Water only seems to underline what everyone has been saying for years, albeit previously confined to his Spanish language pictures: that the smaller and more personal they are, the better. If his latest is, at times, a little too wilfully idiosyncratic, it’s also a movie where you can nevertheless witness it’s creator’s creativity flowing untrammelled once more.

Del Toro called The Shape of Water “a fairy tale for difficult times”, before adding that it was “an antidote for cynicism, a variation on Beauty and the Beast where the beast remains the beast”. Accordingly, like a fairy tale, the picture requires a divorce from the rigours of logic to fully engage. Otherwise, applying such scrutiny, one would understandably question why Elisa (Sally Hawkins, radiant) opts to wait an interminable amount of time upon rescuing Amphibian Man (Doug Jones, gilly and great) before dragging him down the docks and releasing him to safety. It would, after all, have saved a whole lot of grief, pain, suffering and (possibly) lives.

The answer is that she has the hots for him, silly, such that Elisa walks through the movie as a naïf, an Edward Scissorhands or an Amélie existing in a different world to everyone else (or most people else), not merely because she is mute (although that signifiers her as a freak, a misfit, kindred to the variously sexually, racially and culturally disenfranchised with whom she forms bonds) but because she sees the world with untarnished eyes. Which is not to say she’s an innocent (hence her daily bathtub masturbation habit), but that she is unspoiled by the cruelty and intolerance of society around her. When with her friends, Giles (Richard Jenkins) and Zelda (Octavia Spencer), she finds islands of solace, mutual acceptance of difference and differences.

As with Pan’s Labyrinth, del Toro’s magical-realist, fairy-tale construct is realised through the contrast of opposites. Elisa and Zelda are menial cleaning staff at a top-secret government facility, the one where Gillman is delivered and promptly chews off a couple of fingers of his military captor Strickland (Michael Shannon, playing classic Michael Shannon, which is to say, a raging, bug-eyed psycho). The place is austere, foreboding and always on high security, but within its confines a form of unlikely romance develops as Elisa sneaks hardboiled eggs – reeking too much of symbolism to be labelled symbolic – to her scaly friend and playing him tunes. These Amazonian reptile men really dig vinyl.

Del Toro has made out that Strickland is set up as the formidable villain only to allow his vulnerability/oppressed state ultimately show through, which the director argues has been a consistent trait in his pictures. While that may be the case thematically, and viscerally (Strickland walks around with two increasingly festering and gangrenous reattached fingers to remind us of how deeply corrupted and depraved he is, so depraved he washes his hands before he goes to the toilet), the mere fact of casting Shannon announces something less interesting and nuanced.

Now, if del Toro had succeeded in persuading us to root for Strickland’s success, for fear of the consequences from those who oppress him, while simultaneously wanting the same for our protagonists, that would have been something to shout about. As it is, almost everything laid at his door, from his wanton cruelty towards Abe Sapien, to seeing others as types, affording them barely human standing, to finding himself attracted to Elisa – established as a variant on his need for control, since  she can’t talk back, but coming across as an unnecessary and unlikely addition to his roster of already sufficiently over-stocked creepiness – even his candy-popping habit, lends him a two-dimensional villainy that showing his home life does nothing to allay.

Which means Strickland is an effective and formidable presence, even if he’s very slow on the uptake to the extent that he needs to be fed the missing pieces of the puzzle, rather than deducing himself (and the scene in which Elisa is staring him down before signing “Fuck you” would have seen her found out by anyone even incrementally brighter). What he is not is a very interesting one, particular when it comes to his third-act rampage. No one else, certainly not General Hoyt (Nick Searcy from Justified), and definitely not his nominal colleagues Fleming (David Hewlett) and Dr Hoffstetler (Michael Stuhlbarg), occupies that space.

As a consequence, the activities at the facility aren’t as diverting once Elisa has broken Amphibian Man out in a marvellously tense heist sequence, aided by Zelda and Hoffstetler. The latter turns out to be a Soviet agent with a heart, the antithesis of Strickland, doing everything his country asks for him and still getting hauled over coals for his single failure (Stuhlbarg is great, although you can’t help thinking the character was short changed somewhere along the way). Del Toro makes it clear that, in their zest to dispose of the beast, both sides have missed out on the biggest scientific breakthrough they might ever encounter, entirely because they failed to see the wood for the trees (or rather, the creature’s endless rejuvenation ability for his perceived uselessness as a subject in unmanned space flights).

Elisa’s fantasia of escapism, nourished by Dan Laustsen’s enchanted cinematography and an idealised setting (an expanse of a hideaway above a glorious classical cinema) frequently put me in mind of Amélie, although the accompanying Alexandre Desplat score and del Toro’s tone-juggling never quite cohere the way the giddily quirky Jean-Pierre Jeunet and composer Yann Tiersen did. The obsession with musicals is cute but a little over-cooked, complete with a de-rigueur gay neighbour to indulge her doting (that Giles rises above such stereotypes is almost entirely down to Jenkins’ endearing performance; that, and some amusing business with wigs).

Del Toro was frank about the number of balls he was juggling, noting that, of all the various elements making up the movie, what “works for the musical also has to work tonally for the melodrama, the comedy and the thriller”.  This is as much true of the screenplay as the execution. While The Shape of Water never loses its thread, it’s in danger of becoming too accommodating during these interludes, like a movie bore letting loose with no one whispering in his ear when to stop. Nevertheless, Hawkins is so entirely commanding that you’re willing to suspend disbelief in anything she does, and she’s a large part of why most of the whimsical elements get a free pass.

While the mixing up of genres is quite audacious, the actual content of those elements is contrastingly quite conventional, such that when Elisa is suddenly transported into a musical, now with voice, it seems like an inevitability, one del Toro just about pulls off. Not because I felt her dancing with a fish man carried the danger of conveying Putting on the Ritz-type mirth à la Young Frankenstein, but because it feels very much a calculation of where this del Toro’s musically-enthused scenario will end up, as uncynical as his intentions may be. You can’t fault him for challenging himself, though, and credit is particularly due for pulling off a mature love story, one conveyed largely without words, straying into territory – notably sex – he has avoided hitherto, without the prurience that frequently accompanies such fare.

There are other signposted elements. As soon as we see the placing of Elisa’s scars, we know they will have a bearing on the movie’s outcome. So too, the checklist of gender/race/prejudice issues is not a little schematic in conception (the physically disabled, a black woman, a gay man, a communist), but feels less so in execution (del Toro has always been better on screen than on the page). Giles’ subplot suggests the director has been consuming Mad Men box sets at some point, while the sad encounter with the bartender leads to the reveal that the latter is both homophobic and racist and makes revolting green pies.

If Hoffstetler is a good Commie, it doesn’t alter the fact that the Soviets generally are still the bad guys (hardly bucking the current cinematic trend). The only surprise in this scenario isn’t one for a director who always identifies with the monster; the happily ever after comes with the caveat that Elisa must transform for the creature, rather than the creature for her (but wait, didn’t Shrek pull of that trick nearly two decades ago? Maybe not such a game changer after all).

There’s also occasionally a sense that del Toro is striving too hard for Edward Scissorhands-esque naivety and not quite succeeding, simply because del Toro isn’t Tim Burton (or isn’t who Tim Burton was, at any rate). This is why the violence frequently feels jarring and out of step, gratuitous even, with the horror geek unable to get out of the way of his romance.

Where Pan’s Labyrinth was entirely germane and of-a-piece, juxtaposing the brutality of Nazism with the escape/mirroring thereof through fantasy, here the elements are a little more calculated and thus less effective/integrated. You can see the wheels and levers at work, much as in one of the director’s intricately-designed clockwork devices.

Del Toro is always one to encourage the dark, and he’s in sharp focus whenever something nasty is transpiring; however much he may want us to swoon with a submerged bathroom love scene, what really gets him going is Gillman subsequently eviscerating a cat (the filmmaker joins the recently infamous ranks of the Coens and Wes Anderson for inflicting unnecessary aggression on felines everywhere) or Strickland dragging Hoffstetler around by the bullet hole in his cheek.

What of The Shape of Water’s chances come Oscar night? If it takes the big prize, it will be a rare fantasy to go home showered in glory. It wouldn’t be my pick of those I’ve seen thus far (that would be Three Billboards outside Ebbing, Missouri) – although I’d go to bat for Hawkins over favourite Frances McDormand for Best Actress – but for all that I don’t think it’s nearly as perfectly conceived and completed as Pan’s Labyrinth, a picture that seemed to spring into existence fully formed, it would be a worthy runner up. It’s a picture that, like Three Billboards, boasts the fascination that comes with a distinctive voice, and in del Toro’s case is a welcome reminder that the voice can be just as distinctive as ever it was when it forsakes the big payday. 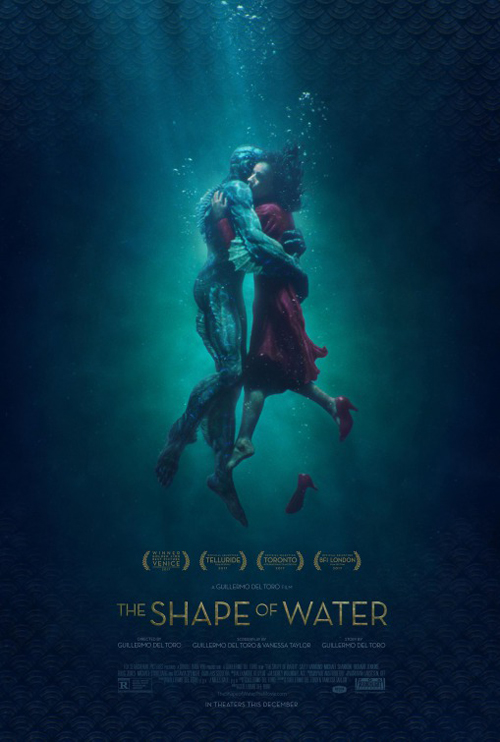