Seems silly, doesn’t it? A wedding. Given everything that’s going on.

Harry Potter and the Deathly Hallows Part I
(2010)

What’s good in the first part of the dubiously split (of course it was done for the art) final instalment in the Harry Potter saga is very good, let down somewhat by decisions to include material that would otherwise have been rightly excised and the sometimes-meandering travelogue. Even there, aspects of Harry Potter and the Deathly Hallows Part I can be quite rewarding, taking on the tone of an apocalyptic ’70s aftermath movie or episode of Survivors (the original version), as our teenage heroes (some now twentysomethings) sleep rough, squabble, and try to salvage a plan. The main problem is that the frequently strong material requires a robust structure to get the best from it.

The split finale device, a means of milking the last pennies from a terminal franchise, was quickly latched onto by other YA makers, Twilight reaping benefits and – showing you really have to love a series to keep getting fleeced – Divergent being unceremoniously axed. Did Deathly Hallows merit the decision? Well, I found Part II the most underwhelming concluding chapter since The Matrix Revolutions (tellingly, both culminate in an endlessly nullifying battle), so I’d argue not.

I don’t doubt there’s more than enough material in the Potter books – at least, after the first couple – to split each into two movies, but that’s only truly beneficial if you’re decide to go the whole hog and follow the TV route. This kind of decision can make or break a movie, interrupting its natural flow (It got lucky this year, but might easily have come a cropper). Of course, the official version is that this happened for entirely creative reasons. But who are they trying to kid, right?

By this point, it seemed as if every seriously well-known thesp had appeared in the series, but there’s still room for Bill Nighy as the new Minister of Magic, presiding over a world gone to pot as Voldermort makes his reincarnated presence felt. And the opening scene with the hissable one is exactly as impactful as he should-but-hasn’t-quite-been before, relying more on the reactions of others to his presence than his presence itself (Jason Isaacs is particularly good as an undone Lucius). Although, I did like his mimicking of Lucius’ trembling “My lord?” in response to a request for his wand, the schoolyard bully bullying the father of a bully. Snape’s effectively unflappable here too, coolly maintaining his united front yet still managing to be superior to everyone else.

There’s a snappy pace to the first half of the film (the shortest Harry Potter until Part II), preceding the more interior “road trip” of Harry, Ron and Hermione. I wondered a bit about the decision to create Harry doppelgangers, amusing as the sequence is (“Bill, look away, I’m hideous!”) –why didn’t they all take the Polyjuice Potion to resemble someone else entirely, or several other people, none of them Harry, as that would surely have created greater confusion (or have multiple Harrys except for Harry himself, who is disguised as someone else)?

The subsequent chase ain’t all that, sometimes showing that special effects haven’t moved on sufficiently to make the flying entirely convincing – either that, or they needed more time for rendering – even if it illustrates the continually rising stakes (Mad-Eye dies off screen, Harry’s owl buys the farm – rather silly to have him flapping along anyway, drawing attention to his true owner – and George Weasely loses an ear).

However, following an entirely indulgent and illogical wedding (identifying this as idiocy within the text in no way makes it excusable), the trio’s alighting in London to secure a horcrux leads to the best scenes in the picture. Like the previous instalment, it illustrates that, when the series brushes with other genres, it can be at its most engrossing. The news that the Ministry of Magic has fallen and is enforcing draconian Big Brother policies, picks up from Order of the Phoenix, so the return of Imelda Staunton as Dolores Umbridge is both appropriate and welcome.

The London section is expertly judged, beginning with a very fine, brief café altercation with Death Eaters that plays as the equivalent of a gangland hit. The ensuing ministry infiltration heist/caper is great, and sees the return of deft physical comedy of identity (the personas assumed by the trio) mixed with genuine danger and menace. Ron’s “What am I going to do? My wife’s all alone downstairs”, in response to the news that the wife of the individual he’s impersonating is about to be interrogated, is hilarious. And Peter Mullan is particularly fearsome as Death Eater Yaxley, taking on the unstoppable tenor of an Agent Smith.

Harry: You’re not still mad at him, are you?
Hermione: I’m always mad at him.

The burden of the locket in the woods is perhaps a little too The Lord of the Rings for comfort, however, and the wits’ end of frayed nerves shows the limitations of the performers at times; they aren’t quite good enough to sustain these long dark nights of the soul, Grinch excepted, who is yet again adept at showing discontent with his friends (previously highlighted in Goblet of Fire). The flirtation with Harry and Hermione developing more than platonic feelings, meanwhile, comes across as Rowling deliberately baiting Harry-Hermione shippers, only to disappoint them.

If this section doesn’t quite come together, one can at least admit it’s a different and unusual development at this point in the story, so full marks for willingness to go that route. And it’s followed by an encounter with Rhys Ifans’ Xenophilius Lovegood, at his house in the middle of nowhere, resembling something out of The Adventures of Baron Munchausen.

It’s a fine, nightmarish episode, as unease leads to the dawn of dread realisation that they have been betrayed, while offering en route some lovely animation telling the story of the Deathly Hallows. Again, while I’m cynical about the reasons for splitting the story, being able to indulge an interlude such as this almost makes the decision seem creatively justified (ultimately, it’s more the deficiencies of Part II that suggest it as fundamentally flawed).

The subsequent passages don’t work nearly as well, however. The capture by Snatchers, with Harry being zapped into having a disfigured face, seems like a slightly desperate and tenuous plot device; it’s odd that the Malfoys don’t instantly think the ugly fellow with Hermione and Ron might be Harry, or attempt to cast spells to find out if it is him. Likewise, bringing back the much-loathed Dobby, absent from the screen since Chamber of Secrets, for a pathos-filled death smacks of exactly the sort of thing you cut not just for time but reasons of good drama too.

But, for all that it is structurally awkward and prone to indulging elements that would have been pruned in the past for good reason, Harry Potter and the Deathly Hallows Part I offers some of the series’ best scenes and sequences. It registers with its pervading gloom and oppression, and shows Yates still inspired – even if it’s clear from the start that there’ll be no clear skies in Potter again; even on a sunlit beach, it feels overcast and desaturated, which suits him completely – three movies into his affiliation with the series, still coming up the goods where it counts. 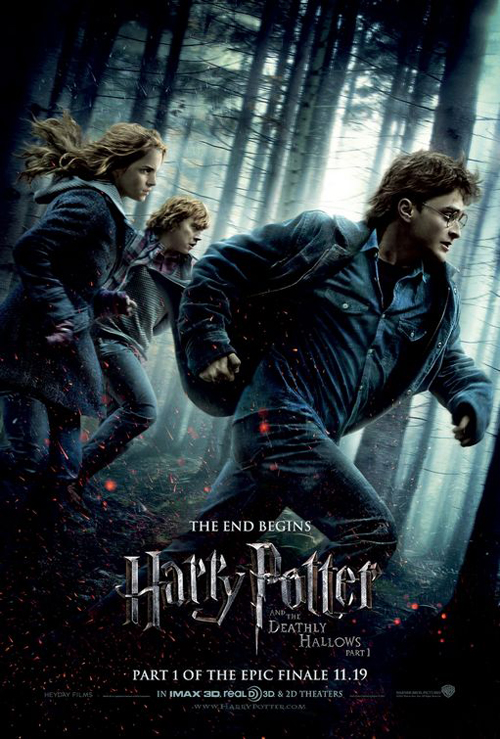