It’s Santy Clause… and his elf.

A lot of the goodwill Home Alone engendered was subsequently undone by the ubiquity of Macaulay Culkin, who stopped being wide-eyed and cute at probably about the time the immediately diminishing returns of the 1992 sequel kicked in. But he’s perfectly placed here, in what was the biggest surprise smash of its year – a year that included several who-knews such as Ghost and Dances with Wolves – even if its biggest selling point, the Tom and Jerry abuse inflicted on robbers Joe Pesci and Daniel Stern, is back ended to the point where you might accuse the trailer makers of wilful misselling.

It’s easy to rag on former child stars, even more so when the two most recent high-profile ones (Culkin and Haley Joel Osment) have been consigned to the backburner in adulthood. In his first couple of movies, though (his calling card was an interrogation of John Candy in Uncle Buck), Culkin was a genuinely likeable presence.  In Home Alone, he’s only occasionally undone by John Hughes’ inability to resist Bueller-ing him up (the hairstyling in the mirror is straight out of that movie, as are some of the quips), so leading him into the precarious territory of precocious rather than unspoiled.

It’s no small feat for a pint-sized performer to carry a comedy, but Culkin manages it; the longueurs of the first half are entirely down to Columbus failing to take out the scissors, rather than a problem with his lead (an inability to edit would also affect his next big foray into the world of child performers, Harry Potter).

Columbus got the gig after Hughes took pity on him being fired over clashing with the notoriously difficult Chevy Chase on the Hughes-scripted and produced – so he probably could have stood his ground with Chevy if he’d wanted to – National Lampoon’s Christmas Vacation (which was one of the festive box-office hits of the previous year, although nothing like on this scale).

Much as Columbus is an anonymous presence, he’s entirely serviceable. He doesn’t quite have the eye or sure rhythm for slapstick Hughes showed in his own directorial efforts, and he spends too much time with the Paris-bound family and building up Kevin pre-home invasion; if Home Alone had been as tight (and stylish) as the not dissimilarly injurious Mousehunt a few years later, it might have been a true gem, rather than just a likeable festive diversion.

Kate McCallister: Maybe you should ask Santa for a new family.

It’s notable how careful Hughes is to thread a homely moral through the picture, though, before getting down to the ultraviolence; Kevin wishes his family away after an altercation with his insufferable extended relatives. These include short-tempered Uncle Frank, snooty – or is that snotty? – sister Linnie (“You know, Kevin, you’re what the French call les incompetents”) and brutish Buzz (“I wouldn’t let you sleep in my room if you were growing on my ass”). But Kevin’s  soon repentant, as are all kids in a similar position (except, they’re usually wishing their parents were outright dead).

Hughes also navigates the treacherous territory of having Kevin’s parents accidentally leave him at home without indicting them for it and making that feasible (“John really filled in every possible logic hole, and the audience always bought it” effused Columbus). Heard and O’Hara do much to sell this too, his nonchalance over-compensating for her nervousness. And then, when the mistake is recognised, those she encounters – including John Candy – making her feel truly dreadful. O’Hara’s slightly too highly-strung interactions as she tries to make a connection home are perfectly played.

Then there’s the actually delivery of the moral, which for all that I’m a cynic about these things when they play up the schmaltz, is pretty well done. Due credit in that regard to the underplaying of Old Man Marley (aka “The Shovel Slayer”) by Roberts Blossom, leading Culkin through a scene that might easily have seemed rather trite. It’s interesting that Hughes flips Kevin’s earlier smartass, quick-fire retorts to the supermarket cashier about strangers, proving him wrong in the context of friendship with a sinister old man.

In contrast, one of my bugbears with the picture is that John Williams’ score is just that bit too much, falling into the trap of leading by the nose he often inflicts on Spielberg’s lesser efforts. Columbus wanted Bruce Boughton (who scored the Columbus-scripted Young Sherlock Holmes) but he was busy with The Rescuers Down Under. He was surprised to get Williams, regarding it as something of a coup, but the consequence is an overdose of the twinkly-treacly; a more restrained hand might have played up the irreverence and dialled down the “wonder”.

At least Williams doesn’t undermine the comedy, though, which is crucial. If Hughes was right to suggest Culkin for the lead, Columbus came up trumps with Daniel Stern (Marv) and Joe Pesci (Harry). Reportedly, they played it broad because they thought it was just a kids’ film no one would see. However, that seems unlikely, given over-the-top is exactly what the roles required (and, if Pesci really didn’t care, he wouldn’t have avoided Culkin on set, intending to make him think he really was mean – he should have just forced him to watch Goodfellas – and probably wouldn’t have bitten him).

The studious ineptitude of Harry and Marv is necessary for a child’s ingenuity to work (killjoy Roger Ebert complained about a plot “so implausible”, it made it hard for him to care about Kevin, which was really entering into the spirit of the thing). We see a test run with a hapless pizza delivery guy fooled by Kevin working the playback of a video of Angels with Filthy Souls (“Leave it on the doorstep and get the hell out of here”), but it takes a truly dense guy like Marv to believe someone has actually been shot in the McAllister residence (by a rival gang, no less).

Harry: I think we’re getting scammed by a kindygartner.

Kevin duly graduates from merely pulling the wool over burglars’ eyes through puppetry to full on GBH. He’s a junior Charles Bronson in Death Wish, dispensing vigilante justice, a little Johnny McClane going Die Hard in a family home. Or Dustin Hoffman in Straw Dogs, with a blowtorch instead of animal traps.

One can find numerous pieces on the lines of “What if Home Alone’s violence was real” or adding blood to footage to show how messy the last half hour would actually get. So suggesting the picture’s violence was sick and sadistic, but that’s kind of stating the – bleeding – obvious. Of course, it is (the one that always makes me wince is the crowbar applied to Harry’s chest). Kids (and some adults) love that kind of thing.

You might reason that making the leap from Tom and Jerry or Road Runner (Stern even looks a bit like Wylie E Coyote) to live action is to blame for this sometimes stony-faced mirthlessness, but those cartoons have also had their fair share of “inappropriate” charges levelled at them. The only surprise is that studios didn’t see the potential for further forays into extreme slapstick violence, outside of the Farrelly Brothers; they may have been partly side-tracked by the Culkin factor, but there’s also the sad fact that very few comedy directors are also visually inspired directors.

Most viewers, at any rate, were on board with the patently absurd exaggeration on display, so weren’t all that perturbed by a couple of hardened criminals (the Wet Bandits, thanks to Marv’s calling card of leaving all the taps on in their victims’ houses) threatening to murder Kevin, and “snap off your cojones and boil them in motor oil”.

Not when he’s shooting them in the balls, in the face, icing steps so they repeatedly fall flat on their backs, dropping irons on their heads, burning their hands with red-hot door knobs, playing havoc with their feet on stairs painted with pitch and plugged with nails, applying blow torches to their heads and baubles to already perforated feet (very Die Hard), causing them to trip up on toy cars (in synchronised fashion) and sending paint pots (full ones) swinging at their skulls.

Culkin may have wrong-footed studios into thinking he would supply them with an instant goldmine, but it’s Pesci and Stern who make the movie. They’re perfect cartoon villains and also apt to give good improv (the chicken line is Stern’s). All three would be back for Home Alone 2: Lost in New York (the “can’t be bothered” title says it all) two years later, by which point Mac was already outgrowing his initial appeal (its more the surprise he managed to hang in there for another two years after that).

The real legacy of Home Alone is its sleeper success, though. It was the golden egg that kept on giving, a paltry $18m price tag (and Warner Bros put it into turnaround before Fox picked it up!) generating nearly half a billion dollars globally (despite its festive setting, rit remained in the US Top Ten until late April 1991). Back in 1990! Its US take was the equivalent of $600m today, inflation-adjusted.

I’m not convinced by William Goldman’s suggestion it spawned the phrase “Home Aloned” for movies where a single picture crushes the success of all contenders in its path, though. Apart from anything else, during the period of its release hits like Dances with Wolves and Kindergarten Cop made a mint – and Goldman’s Misery – accompanied, as always, a series of under-performers, because they stank, such as Three Men and a Little Lady, Look Who’s Talking Too and Bonfire of the Vanities. This emphasises that the converse can be true; the mega-hit instead feeds interest in surrounding pictures, as happened with Avatar. It’s nevertheless easy to forget that such an innocuous movie became such a monster. That’s the devastating combination of Christmas and extreme violence for you. 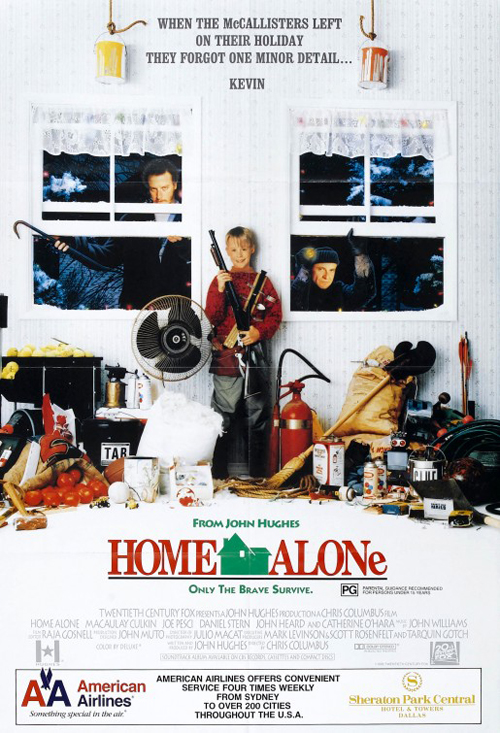 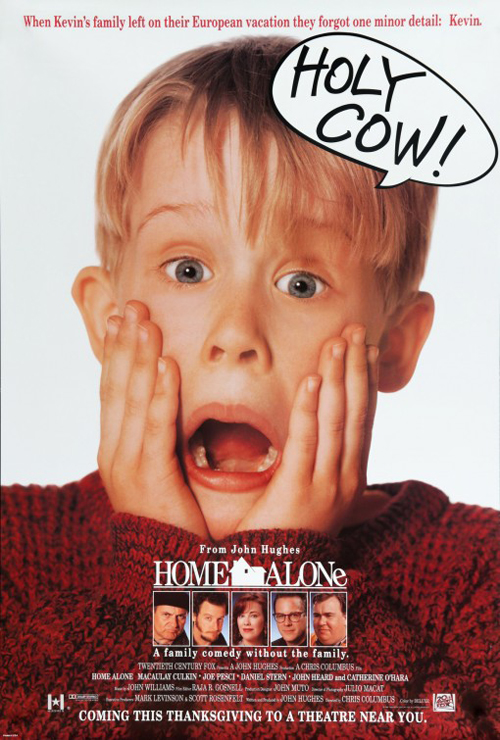