Too much gossip below stairs, Steed!

The Avengers
4.22: What the Butler Saw

In the same vein as The Girl from Auntie and Quick-Quick Slow Death, What the Butler Saw positions ingenious comedy at the forefront of a plot that, as with the previous season’s Death à la Carte, allows Steed to impress others with his phenomenal taste and etiquette. Brian Clemens screenplay also encourages a few clever twists along the way, although this does mean the ultimate reveal of the villain is rather an anti-climax. Still, that’s about all that’s up with What the Butler Saw.

It’s a wonder it took the series four seasons to uncover a cadre of death-dealing butlers, but the results are more than worth the wait, complete with a perfectly cast John Le Mesurier as head butler Benson (his second and final Avengers appearance, following the previous season’s Mandrake).

The first part of the episode sees Steed (Emma doesn’t appear until fourteen minutes in) getting down to investigating this studiously servile profession, having been told someone is leaking defence secrets (an admiral, a brigadier and a group captain are the possibilities) before his informant, a double-agent barber (David Swift), is stabbed while Steed has his head wrapped in a towel. These early passages, with Steed on a trail of characters and clues while donning in an array of disguises and facial appliances, has a similar farcical zest to The Prisoner’s The Girl Who Was Death a year later.

He first poses as Commander Red, sporting a fine fake beard only matched by Vice Admiral Willows’ (Humphrey Lestocq). There’s an early misdirection here, as Benson is Willow’s butler, and we haven’t seen whoever is giving him orders in the first scene; it wouldn’t be outside the series’ bounds to show the culprit so early, but no, that’s not the case.

Steed’s then sporting a very Brigadier Lethbridge-Stewart tache as Major White, visiting Brigadier Goddard (Howard Marion-Crawford) and first encountering the latter’s doddering dad, Major General Goddard (Kynaston Reeves), who makes Steed crawl around the carpet like it’s a war zone. His charge that his son is a “Traitor! Ought to be shot” is actually because he wasn’t in a cavalry regiment, rather than a reflection of his duplicity, however.

Finally, and most amusingly, Steed poses as Squadron Leader Blue, with a massive mouser that could spar confidently with Terence Alexander’s in the season opener; he’s after Denis Quilley’s Captain Miles, but instead must make do with Squadron Leader Hogg (Leon Sinden), who has the regulation RAF whiskers to match. Their conversation, couched entirely in acronyms (above), is one of the batty highlights of the episode.

Steed: You don’t seem to be making much progress. You’re there. He’s there. And the competition’s moving all the time.
Mrs Peel: Competition? What competition.
Steed: You’re remarkable, Mrs Peel.

Quilley’s another highlight, though, and another opportunity for Clemens to misdirect.  He’s set up as something of a lothario (pictures of lovelies adorn his office), and told he “runs his amorous adventures like a military operation”, Steed sets Mrs Peel on his case. Or rather, as she confidently puts it, “He will come to me”. She proceeds to ensure exactly that, fuelling his subconscious by dropping her portrait everywhere for him to see before showing up at the bar and leaving the WACs he’s cracking on to in the dust.

Miles: You like my etchings?
Mrs Peel: You actually do have some?
Miles: The best of the collection is upstairs.

As soon as Miles has Emma to himself, the curtains draw automatically, the lights dim, a table with booze flips out and her chair drops back. Miles himself appears in a smoking jacket with a cigar (“That’s much cosier. Now, let’s get to know each other better, eh?”) Various attempts at seduction ensue, with Miles managing to wrap his teeth around her glass rather than lips and Steed, now butling there, continually dropping in and interrupting his lack of progress (at one point, Emma struggles to ring the bell herself). Eventually, however, she decides enough is enough and puts some decisive fighting moves on him:

Mrs Peel: Now then, Georgie. You and I must have a little talk.
Miles: You really don’t mind if I don’t try to seduce you?
Mrs Peel: Don’t give it a second thought.

She offers Georgie a cuppa, and surprisingly, he is most relieved:

Miles: Oh, I’d love a cup of tea. It’s this terrible reputation of mine, you see. I don’t know how it started, but now I’m stuck with it. The full Casanova bit. It sometimes can be very tiring.

There’s one last gasp of innuendo with Miles’ request “There is one thing I’d like to do with you”, upon which we cut to Steed trying to eavesdrop with a glass pressed against the other side of the door. All we can hear is giggling; he enters to discover them playing Ludo.

Hemming: And let us not forget our slogan, gentlemen. Better Brighter More Beautiful Butling. And our masters shall want for nothing at all.

Miles isn’t the traitor, of course; it’s dodgy butlers attaching tape recorders to their masters’ uniforms, the kind of thing that leads to the bizarre and cartoonish image of the three officers climbing inside a zip bag for their confidential meeting (to no avail).

By this point, Steed has been accepted by the Butlers and Gentlemen’s Gentlemen Association, going down a storm with Hemming (Thorley Walters), the head of the Association. Clemens successfully casts suspicion on him too for a spell, since Benson appears to be taking his orders, but when he ends up dead in a washing machine, Steed must take his place at the Miles household (earlier, Steed notes his dual roles: “But surely, you’re in service with the Miles household?” “‘In service with the Miles household.’ Admirable, Steed, admirable. A fine grasp of the vernacular”).

Hemming: Too much gossip below stairs, Steed!

Steed is an enormous hit, be it at pressing trousers or reeling off the correct phrasing, so it’s inevitable that he’ll be found out, particularly since Benson recognised him from Willow’s residence. Except that Benson can’t actually place him, and in another twist, it’s Steed’s dodgy credentials that do him proud:

Benson thinks he’s been inside, an excellent qualification for their scheme, his suspicion “confirmed” when he discovers that Duke of Duffolk, The Earl of Isley and The Honourable Fleghorn – Steed’s references – are“really the names of pubs” (“You know, you make an excellent butler but a very poor forger”).

The reveal that the mastermind is the rather non-descript Sergeant Moran (Ewan Hooper), with rather rote motivation (“Twenty years in the service and relegated to polishing glasses”), is a touch disappointing after all this scintillating interaction, then.

However, there’s still a decent fight with Emma (“I don’t need a gun to kill a woman”) in which she leads Moran through a series of doors (there for training practice), shutting them behind her as she goes, and the reappearance of Major General Goddard (“Young girls in the frontline. Don’t like it at all. Most distracting”), offering his arm to Emma and leading her off down the corridor, much to her amusement.

Mrs Peel: Steed, why don’t you say it. Go on, I know you’re dying to say it.
Steed: Say what?
Mrs Peel: That, in spite of all possible suspects–
Steed: The butler did it.

The laugh-down has Steed and Emma ascending in a helicopter. A spry, sharp episode, and one of the best of the fourth season. 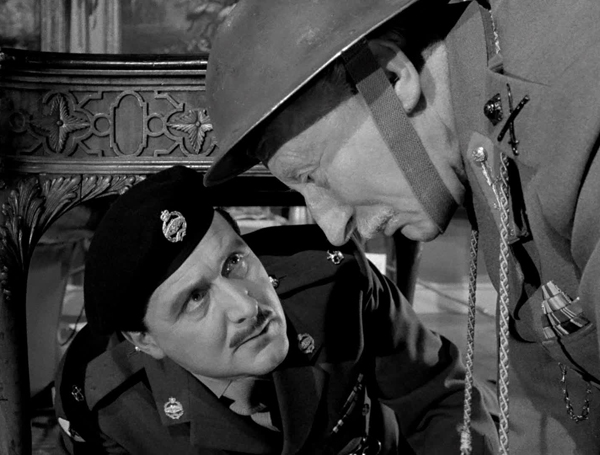 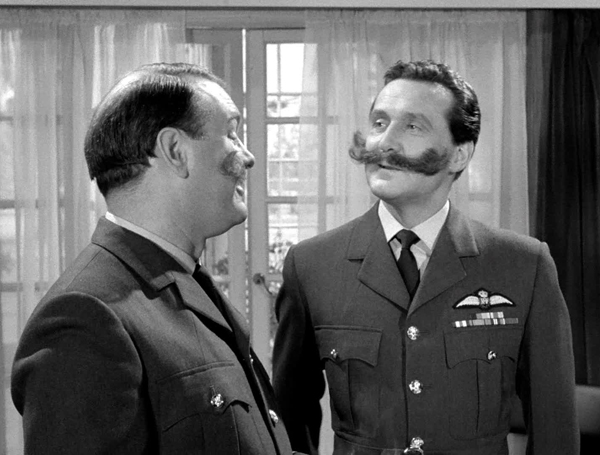 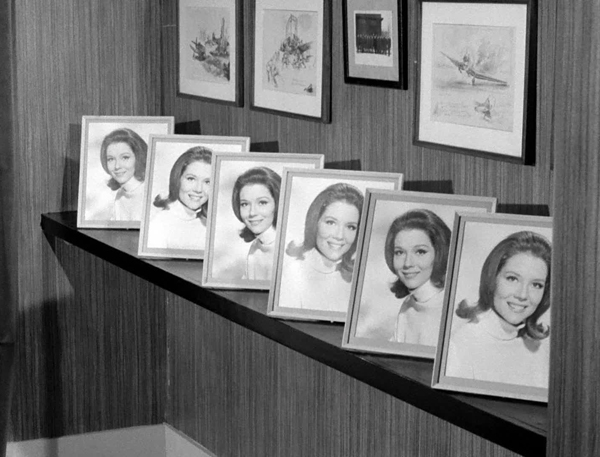 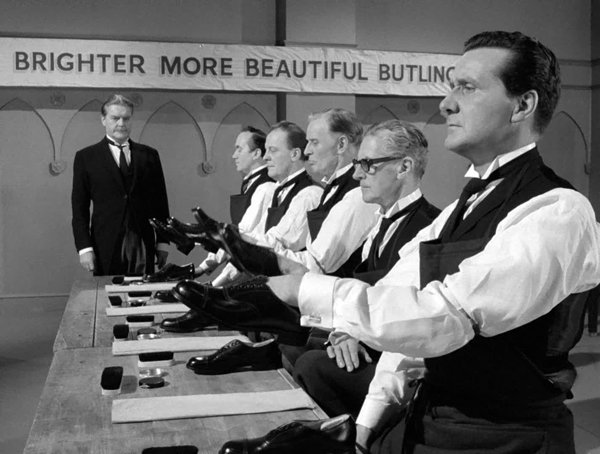 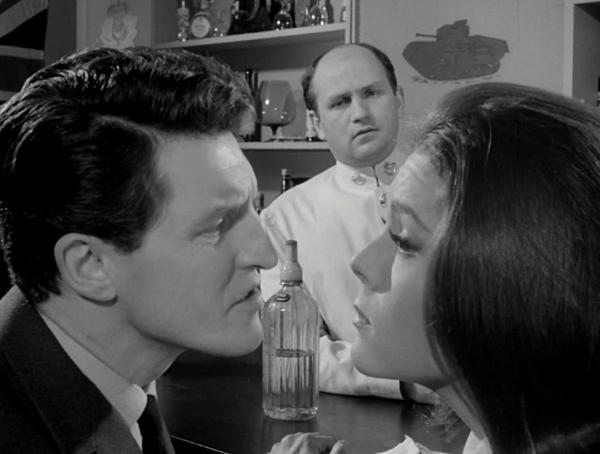 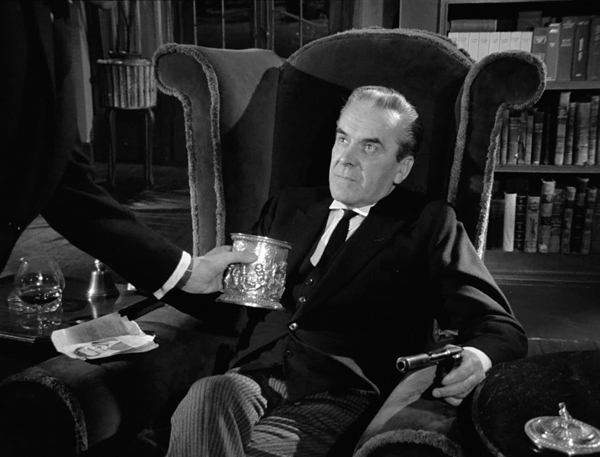