Space is disease and danger wrapped in darkness and silence.

If JJ Abrams’ taking up the torch of the original Star Wars trilogy had been as supremely satisfying as his Star Trek reboot, I’d have very little beef with it. True, they both fall victim to some incredibly ropey plotting, but where Star Trek scores, making it an enormously rewatchable movie, is that it gets its characters right – which isn’t to suggest it’s getting The Original Series characters right, but it’s giving us compelling new iterations of them – and sends them on emotional journeys that satisfy. If the third act is somewhat rote, its achievements up to that point put it comfortably in the top rank of Trek movies.

Albeit, some fans of the show would argue that what it’s doing isn’t very Trek at all, that Abrams is bringing his love of – yes – Star Wars-style space opera to the Trek universe and fashioning something that resembles TOS in name only (here he gives us Han Solo as the lead, and a Jedi as the supporting character).

They may have a point, as the particular brand of philosophical intercourse and righteous moralising that marked out the series is in scant supply, but I can only reiterate how enjoyable this movie is. Is that a cop out? That it disarms the senses in the manner of a sugar rush, rather than providing food for thought? Quite probably: it’s a ride, a blast, confidently performed by an expertly-chosen cast (bar one, perhaps), so illustrating, as with The Force Awakens, that JJ really knows how to pick ‘em.

Added to which, Michael Giacchino furnishes the picture with an un utterly gorgeous, hugely affecting score. Giacchino has fared variably with his big

-screen work, but this is right up there with some of the most indelible, moving incidental cues he supplied Lost. It’s quite something to have delivered a new Trek theme that can stand proud – it may not surpass the original, but it certainly knocks the stuffing out of The Motion Picture/ Star Trek: The Next Generation version.

Abrams and his composer pack a musical wallop from the first, as Thor’s self-sacrifice ensures the survival of his wife and child, before segueing into a young James T stealing his stepdad’s car to the sound of Sabotage (encored in Star Trek Beyond, albeit one can’t help but feel it’s less than inspired to rest on your laurels, inviting approval with that kind of call-back). The casting of Chris Pine is absolutely the key to the reboot’s success, even more than who they chose for Spock. Pine’s just so damn charming, and gives a perfectly modulated performance. So much so that the biggest compliment you can pay him is he makes it look effortless.

Test Administrator: How the hell did that kid beat your test?
Spock: I do not know.

If you can get past this version of Kirk performing a straight-up cheat on the Kobayashi Maru rather than being very clever (i.e. he doesn’t reprogram the computer himself, he gets someone else to do it), then his initial contretemps with Spock is highly effective in establishing the picture’s ongoing tension (“The test itself is a cheat, isn’t it?”) There’s material here that really shouldn’t work – Kirk with a fat tongue and swollen hands attempting to warn Pike of the danger of Nero’s return – but it plays faultlessly because Abrams has an unerring acumen for pace and escalation. And because we’re onside Kirk as the underdog, with something to prove, with the odds stacked against him (even as a bit of jock with something to prove and the odds stacked against him).

McCoy: Who was that pointy-eared bastard?
Kirk: I don’t know, but I like him.

Spock’s path is more divergent, if equally informed by parental loss, as we’re exposed to him on the constant verge of an emotional eruption. Zachary Quinto, even in repose, doesn’t have the impenetrable quality of Leonard Nimoy; he appears mildly annoyed rather than detached. But again, if you looking for fidelity to the original, you’re going to be disappointed, And why would you? This is a different timeline, as we are constantly told.

Spock here is violent even as a wee bairn, and we see him permanently petulant, in love (with Uhura – a smart move that undercuts Kirk’s natural cocksmanship, although it slightly serves to identify Uhura as an other half rather than a person in her own right; still an improvement on the original incarnation, however, who was only ever a glorified switchboard operator).

Roberto Orci and Alex Kurtzman undoubtedly have their issues as writers (some would say that’s putting it mildly), but they thrash out the beats of Spock’s arc here quite seamlessly; his ties to his (human) mother are underlined from the start, so losing her is entirely traumatic and throws him off balance, providing his motivation for beaming Kirk off the ship and the latter’s for provoking him into proving himself unfit for duty. Let’s face it, though, it’s a bit of a stretch that Spock would actually think of and be enabled to throw Kirk off the Enterprise. He’d surely be sent straight to the brig. But then he wouldn’t get to meet Spock Prime.

Ah yes, Spock Prime. It’s nice to see Leonard Nimoy again, of course, even if he’s leading with his dentures, but there’s something a tad disingenuous about the decision. You don’t need him to rewrite the timeline (pick any character, or make up one), and it’s a blatant attempt at hedging bets, trying to keep the faithful faithful in the face of a potentially unpopular decision (although, let’s face it, Star Trek Academy nearly happened in the ’80s, and the potential recasting there really was frightening).

The result not only does Quinto a disservice ­– here’s the guy with forty-plus years making the role iconic, so don’t even entertain the notion that you’ve got a glimmer of a chance to make the part your own – but feels ungainly. It’s even more so in the sequel, where featuring him begins to look like an active insult. Some of the choices are a bit off – should Nimoy really be calling Pine Kirk “Jim” all the time, and that mind meld is blatantly included just so there’s a mind meld in the movie, that and an awkward mass of exposition –  and its extraordinary how, with a whole planet to mess about on, Kirk should stumble on the exact cave where Spock is hiding out, and be within spitting distance of Scotty. So yeah, it’s all about Abrams sheer verve smoothing over a not inconsiderably bumpy screenplay.

Every Trek movie since The Wrath of Khan that has consciously attempted to come up with a worthy villain to be talked about in the same breath as Ricardo Montalban has fallen short, some more than others. Eric Banana’s Nero is the second Romulan-focussed baddie on the trot (albeit seven years apart) and his motivation is both sloppy and one-note (I suppose, if they ever make another post-Voyager show, they’ll now have to remember there’s no more Romulus). Bana’s fine, but Nero has no meat on his bones.

On the other hand, Bruce Greenwood is the best piece of casting here beside Pine, making Captain Pike exactly the sort of father-surrogate mentor figure needed, and it’s a great shame he’s summarily written out in the sequel. Ben Cross is okay as Sarek, if a bit on the expressive side, while Noonie makes a believably cherished Amanda (it comes to something when Winona Ryder is playing all the mum parts).

Scotty: Are you from the future…? Well, that’s brilliant. Do they still have sandwiches there?

The rest of the crew? Zoe Saldana is allowed to be more interesting than Nichelle Nichols ever had a chance to be, Karl Urban does a note-perfect DeForest Kelly impression (“Green-blooded hobgoblin!”) Cho changes Sulu’s nationality, but brings his own personability, while Anton Yelchin gets to play Chekov with the wariable diction of Walter Koenig but is revealed as a tech wizard as well.

And then there’s Scotty. I like Simon Pegg in a lot of things – he’s the perfect comic relief in the Mission: Impossibles, especially when teamed with Cruise – but he sticks out like a sore thumb here, doing a bad Ewan Bremner impression and ranting at his diminutive sidekick (the unenviable Trek equivalent of an Ewok? Somehow Deep Roy’s Keenser managed to last all three movies, a better record than Jar Jar) He isn’t a deal breaker, but he’s the one element where Abrams’ fanboy instincts led to the wrong choice.

The plot of Trek may evidence Orci and Kurtzman’s typically patchy approach (for the first two-thirds, Into Darkness’ storyline is actually pretty good, before falling into significant disrepute), but Abrams really brings it with energy and enthusiasm (and, yes, a slavish addiction to lens flare and an Enterprise bridge designed by Apple). There are a number of enervating set pieces, the highlight probably being the planetary freefall in which Kirk and Sulu (and an unlucky red shirt) dive to dismantle the drilling device intent on feeding red matter into Vulcan.

You might argue Star Trek ’09 displays the worst excesses of blockbuster filmmaking, where the plot disintegrates as soon as you prod it. I’d counter that Abrams, who may not be a Trekkie (no bad thing, except when it came to thinking Khan’s return was a good idea), has a firm a grip on his characters, seeing you through most of the cocky storytelling beats (it’s no coincidence that the cast are also The Force Awakens’ stronger suit, the storyline not so much). What he probably needed to do was bring someone on board with a firm grasp of structure and internal logic for the sequel.  Maybe he’ll consult with Rian Johnson on Star Wars Episode IX. We can but hope his all-consuming mystery box will not win out. As it stands, though, Star Trek might be his best movie (it’s a close thing with Mission: Impossible III, much underrated). And, while it’s some distance from perfection, but it can lay claim to being the most confident, purely cinematic iteration of the TV series. 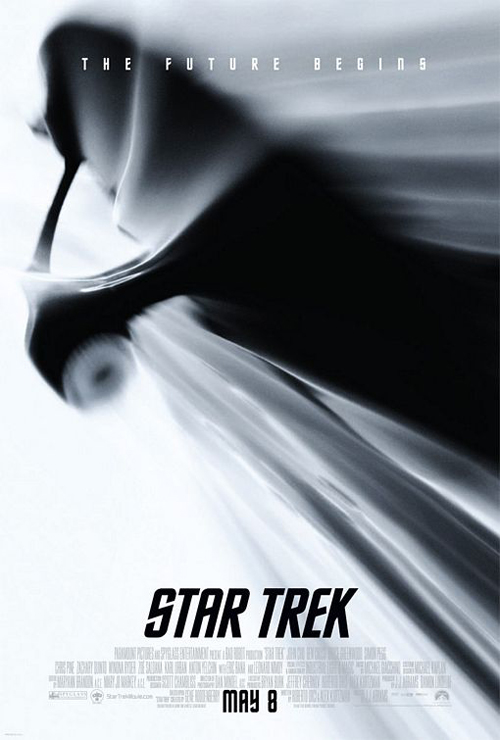