Don’t give me any of that intelligent life crap, just give me something I can blow up.

Is Dark Star more a John Carpenter film or more a Dan O’Bannon one? Until the mid-,80s, it might have seemed atypical of either of them, since they had both subsequently eschewed comedy in favour of horror (or thriller). And then they made Big Trouble in Little China and Return of the Living Dead respectively, and you’d have been none-the-wiser again.

I think it’s probably fair to suggest it was a more personal film to O’Bannon, who took its commercial failure harder. Carpenter certainly didn’t relish the tension their creative collaboration brought (“a duel of control” as he put it), as he elected not to work with his co-writer/ actor/ editor/ production designer/ special effects supervisor again. Which is a shame, as, while no one is ever going to label Dark Star a masterpiece, their meeting of minds resulted in one of the decade’s most enduring cult classics. And, for all that they may have dismissed it/ seen only its negatives since, it’s one of the best movies either has worked on.

Carpenter evidently deigned not to be interviewed for the 2010 documentary on Dark Star’s making, since his contribution is solely in the form of archive material. By the sound of it, he’s happy to distance himself from his first feature (“not my favourite”) feeling it shows all too evidently “student characters and roots” (he did provide a new rendition of the main theme on his recent Anthology, though).

When it crumbled on release, he went away and wrote Eyes of Laura Mars, sold it, and got Assault on Precinct 13 off the ground; his career as a suspense merchant was born. How true is it that he discussed numerous projects with O’Bannon, ones he went on to do alone, as the latter’s widow suggests? I don’t know, but they certainly both keyed into terror as the way forward during the next decade.

O’Bannon clearly felt protective over Dark Star, despite his reservations over how it turned out, editing it into a “director’s cut” in 1992 by snipping out ten minutes of filler Carpenter had never been keen on. I can get behind some DCs, but this one is really the editor’s cut, and besides, I grew up with the longer version. As inessential as Pinback (O’Bannon) wearing spring eyeball glasses and Doolittle playing milk bottles are – and one might argue their validity, serving to underline the excruciating banality of their existence – they’re part of its essence for me (I’m trying to recall when I first saw it; it would have been either the ’82 or ’84 BBC screening).

Pinback: I’m tired of being treated like an old washrag! Last week was my birthday, and nobody even said happy birthday to me. Someday this tape will be played, and then they’ll feel sorry.

The extent to which Carpenter was unhappy with the reshot scenes is unclear from the doc (“They feel added on”), but he’s sorely mistaken if he disapproved of the elevator shaft sequence between Pinback and the beach ball alien. Pinback was a feature of most of the added material (“sequences where Pinback goes and does stuff”), because O’Bannon was there, and available. It’s a damn shame he barely acted after this, since he’s by far the funniest part of Dark Star. His passive-aggressive, dyspeptic manner is best illustrated by his video diary, in which he opines about his fellows in a manner suggesting he believes himself far superior to them (despite being unqualified to be aboard in the first place). One log in particular is a genius piece of comedy based on what we don’t hear and see:

Neither will you on paper, I suspect, so the video is linked below. Other gems include “Oh, yeah, Storage Area Nine, er self-destructed last week and destroyed the ship’s entire supply of toilet paper. (Shakes Head). That’s all”. Then there’s his wonderfully childish, “I’ll tell Doolittle!” when he fails to dissuade Boiler from engaging in reckless target practice, and his equally juvenile reluctance to fulfil his alien feeding duties (“Oh, I don’t want to do that”) before being remonstrated (“May I remind you, Sergeant Pinback, that it was your idea in the first place to bring the alien on board”)

That Pinback keeps calling the alien “Idiot” is, of course, ironic, since it does its best (tickling!) to send the hapless sergeant (real name: Bill Frooj) plunging down the lift shaft and is only eventually kyboshed by an inability to withstand tranquiliser darts (a deflating experience).

The lift sequence shows the team’s creative visuals at their most inventive; you can see the fakery, but it’s still fun, with sustained underlying danger amid the silliness, courtesy of Carpenter’s insistent score.

And as for the alien, it’s a tour-de-force feat of hand acting from Nick Castle, later the shape in Halloween, particularly drumming its (Gillman) claws, and eating its squeaky mouse (and tickling). It’s only a shame O’Bannon agreed with George Lucas’ dunderhead assessment of the creature (when the former went to work on Star Wars): “He said there was only one thing that bothered him about the movie: ‘The beach ball. It looked so fake.’” A damn sight more realistic than any of the CGI fakery in the prequel trilogy, though, George, and crucially not supposed to be taken seriously either.

The characters in Dark Star represent, however loosely, levels of consciousness. Boiler is an instinctive, primal character, action and few words, relying on brute instinct. Pinback is self-aware but too caught up in his own sense of inferiority to progress or develop. Doolittle sees the futility of it all (“Don’t give me any of that intelligent life stuff. Find me something I can blow up”), and nostalgic for his lost youth (“I used to be a great surfer”). He struggles to find inner peace or a way out of this trap. He’s been used up by the system, consigned as they all are to pointless endeavours (destroying unstable planets – er, why? Just because).

Talby (Dre Pahich), the overtly hippy character, has contrastingly turned the restrictions enforced on the crew to his advantage; he has become zen, content to be on his own with the cosmos (he is enthused by the prospect of seeing the fabled Phoenix Asteroid, travelling around the universe once every 12.3 trillion years, glowing with all the colours of the rainbow… “They just glow as they drift around the universe”). He even looks like Mike Nesmith.

Talby doesn’t react with fear or panic to the prospect of their demise, and so is rewarded with the opportunity to become one with and explore the universe with the asteroid (Dark Star’s version of 2001: A Space Odyssey’s Star Child). He also instils in Doolittle sufficient acceptance – “What a beautiful way to die. As a falling star” – to make the most of his own final moments (surfing on a piece of debris into the planet’s atmosphere, to land as a falling star – “I think I’ve figured out a way”). But first, Doolittle must engage in his own ultimately doomed attempt at consciousness raising.

Bomb #20: Intriguing. I wish I had more time to discuss this.
Dolittle: Why don’t you have more time?
Bomb #20: Because I must explode in 75 seconds.

Bomb #20 is understandably peeved at repeated errors in being prepped for detonation (“Oh, I don’t want to hear that” he responds on the second occasion, before agreeing to return to the bomb bay reluctantly: “Oh, alright. But this is the last time”). Dolittle attempts to teach the bomb start out well, with the principles of phenomenology (“This is fun” replies the bomb of its crash course in establishing whether or not it exists). Before rather falling apart (“You are false data” the bomb instructs Pinback, concluding “The only thing that exists is myself”).

So much so, Bomb #20 reaches the obvious conclusion it is God (“Let there be light”). Adam Beckenbaugh provides a marvellously quirky vocal reading of the bomb; for most of these cast members, it’s their only significant credit (or in his case un-credit), but their contributions are indelible. There’s something very sharp, very pre-Douglas Adams about this embodiment of a sentient bomb. If O’Bannon and Carpenter hadn’t come up with it, Adams very probably would (the chirpy computer on the Heart of Gold is surely indebted to Bomb #20, and there’s something of Pinback in Marvin. I’m not suggesting Adams even saw it, of course. But he probably did).

Yeah, Dark Star’s cheap, and wears it on its sleeve, but it nevertheless delivers on its meagre budget; it wouldn’t just be O’Bannon, but also Ron Cobb who went on to work on Star Wars (this is a movie where the ship comes into lower frame left – albeit not the first shot of Dark Star or of the Dark Star – and which features a creditable asteroid field). And both Dark Star and the earlier Silent Running give the lie to the idea that science fiction in the first part of the decade was in a rut that needed Georgie to come along and apply jump leads (both also share DNA in reflecting post-60s disillusion with mankind’s potential – potential that had been exemplified by Kubrick’s “ultimate trip” – which in turn would give way to Lucas’ embrace of myth making and Spielberg’s friendly alien contact).

This is also the first sight – or sound – of Carpenter the synth master, but there are various noteworthy non-score musical interludes too, such as Bill Taylor’s Benson Arizona (music by Carpenter), “Martin Segunda’s” When Twilight Falls on NGC 891 (actually James Clarke – Spring Bossa) and, of course, The Barber of Seville piping up when Pinback’s stuck halfway in, halfway out of the lift. In terms of influence, Dark Star also inspired a track on David Holmes’ first album, This Film’s Crap Let’s Slash the Seats.

It’s quite probable James Cameron – in another comedic influence played straight in the xenomorph franchise – was influenced by Boiler’s knife game for Bishop scaring Hudson in Aliens. And there’s no doubt Pinbacker in Danny Boyle’s Sunshine was un homage to Carpenter’s movie; it didn’t help Alex Garland any with his third acts, though.

So, when’s the remake happening? They’ve done, or have in the pipeline, most of Carpenter’s back catalogue, after all. Maybe it’s redundant. There’s something of the existential crises of Dark Star in early Red Dwarf – Rimmer is Pinback by way of Joe Saunders’ Commander Powell (in as much as the latter is dead, as is Rimmer). I’m sure Powell fits into the stages of consciousness evolution in some way too, managing to be dead and insightful, yet preoccupied how the Dodgers are doing – early, or late, onset dementia?

Really, though, Dark Star ought (not) to be a dead cert for Seth Rogen to pick up, refashioned as one of his boorishly oafish stoner comedies, with that laugh like an asthmatic hyena echoing around the cosmos. God help us. Or Bomb #20. 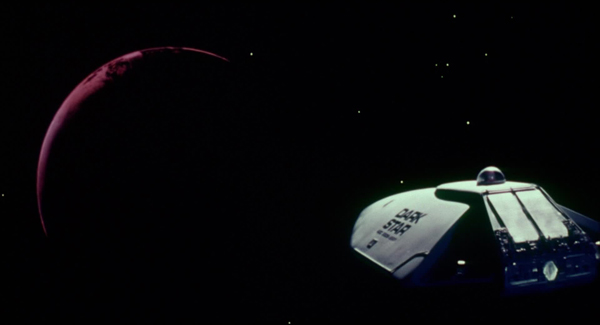 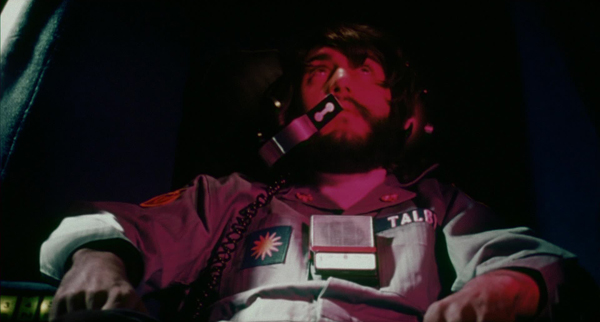 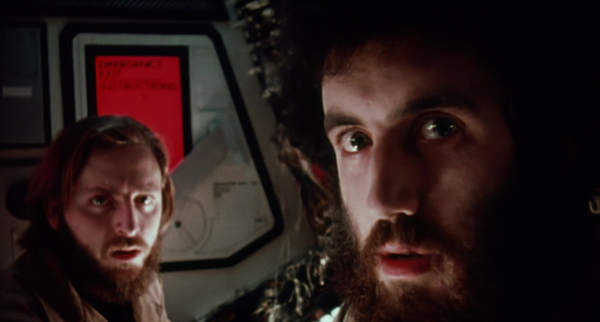 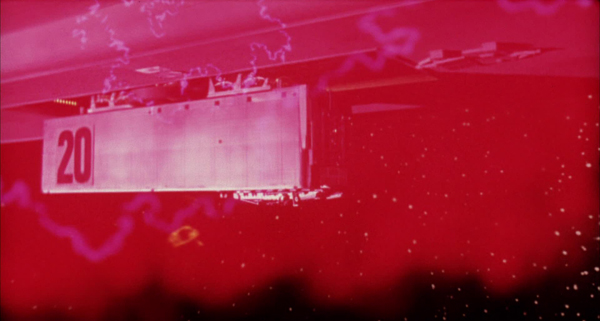 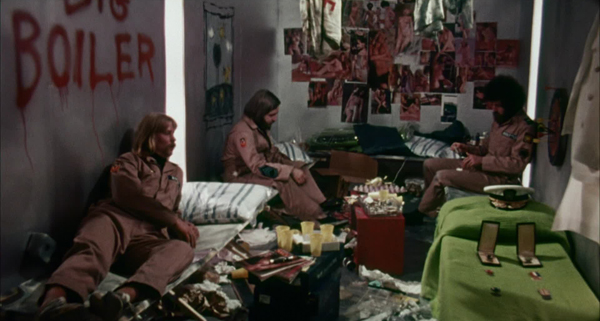 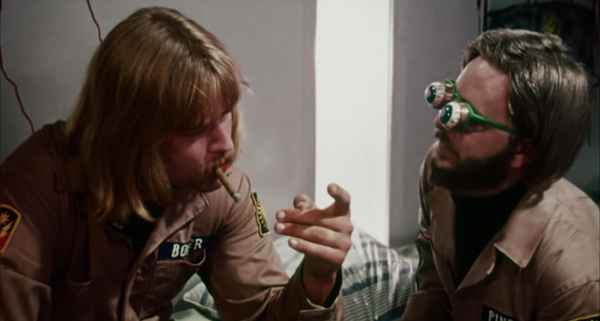 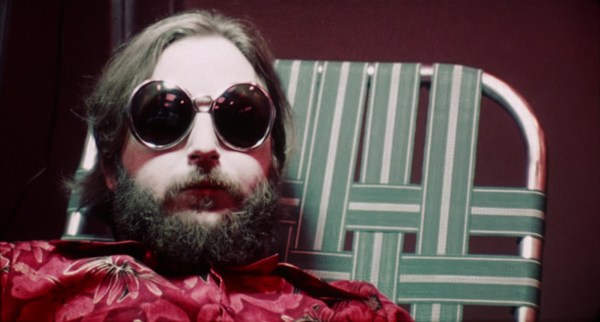 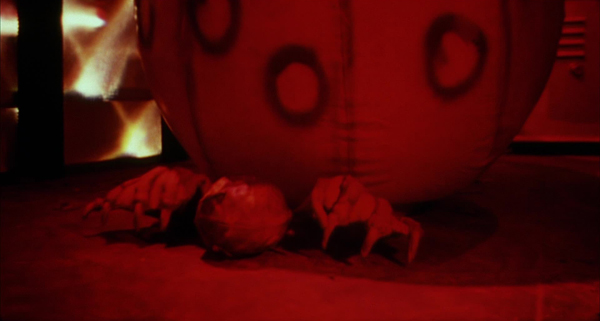 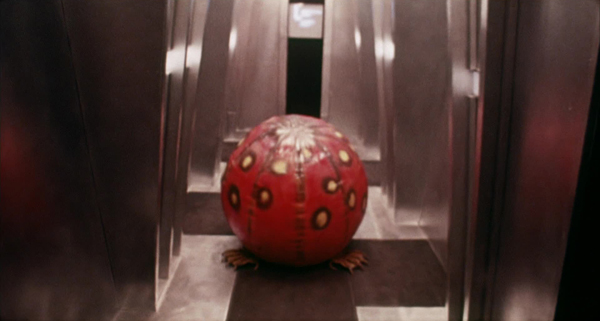 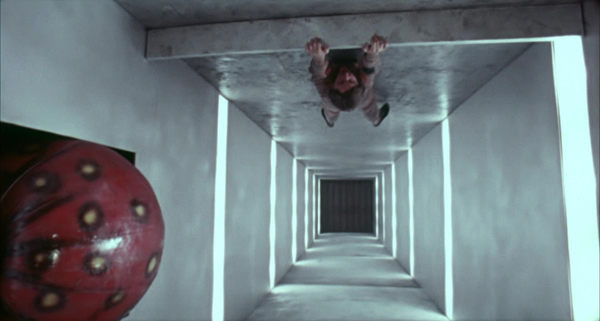 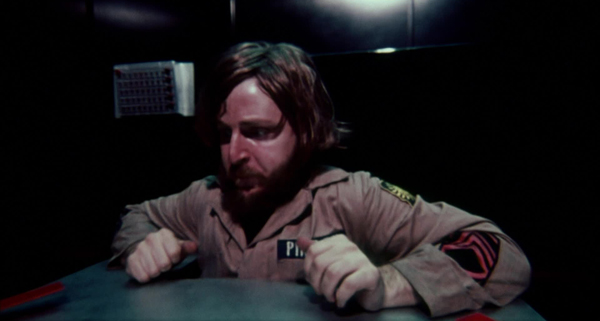 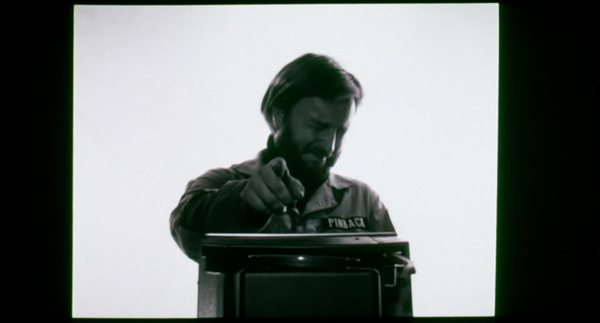 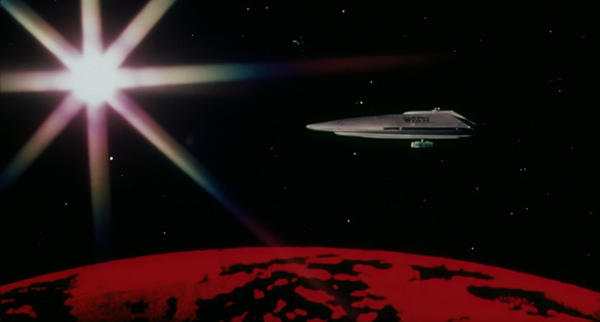 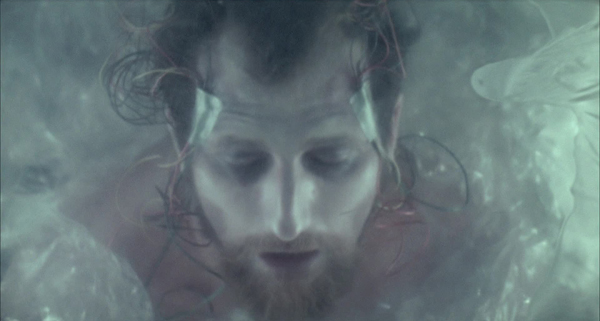 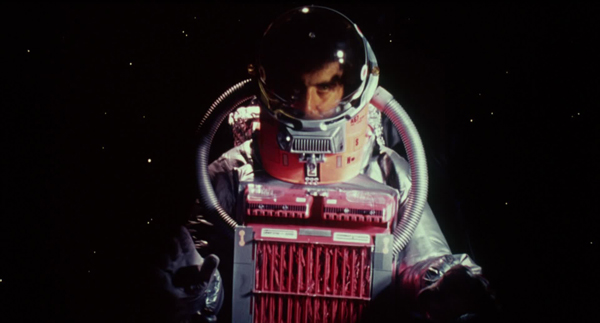 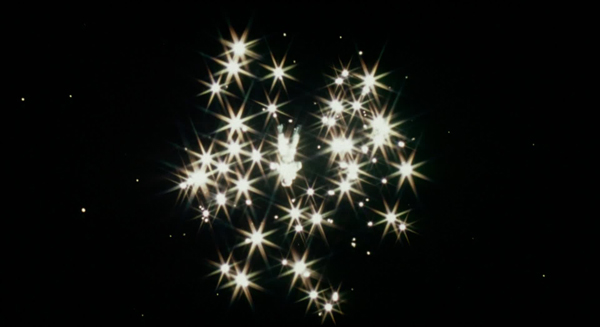 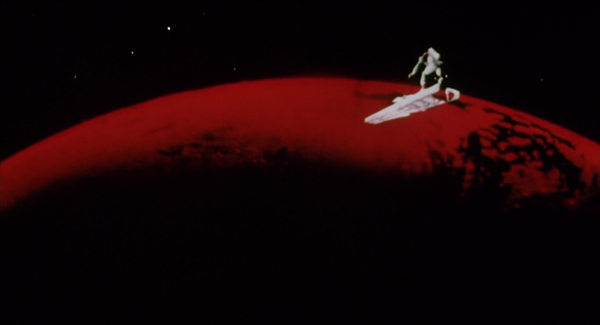 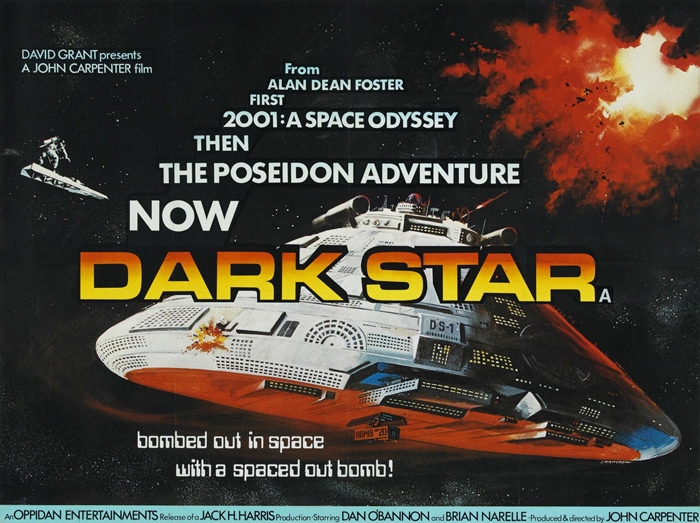 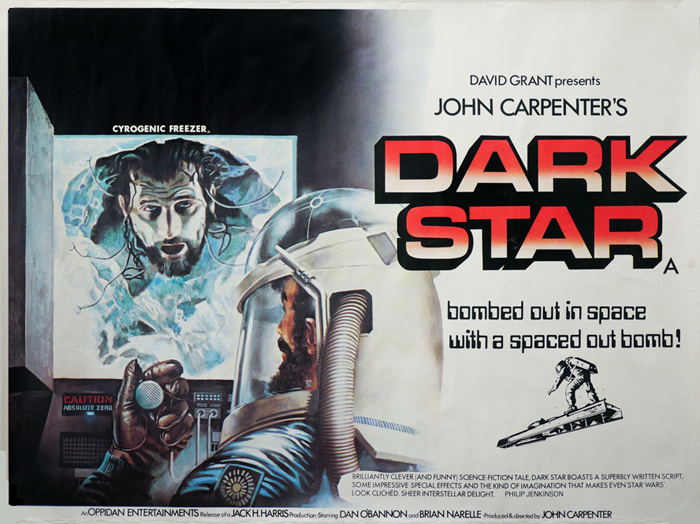