Today, there just isn’t enough war to go round.

The Avengers
4.20: The Danger Makers

A bit of a plod this one, enlivened by a couple of scenes, admittedly, but not enough to salvage The Danger Makers. The title pretty much tells you the score, as military personnel, dismayed by the lack of conflict in peacetime, create thrill-seeking exercises for themselves. Unfortunately, the thrill seeking only intermittently extends to viewer enthralment.

On the plus side, veteran film director Charles Crichton delivers a polished rendition of Roger Marshall’s screenplay, in which Apollo (revealed to be Dr Long, played by Douglas Wilmer, perhaps best known as the BBC ’60s Sherlock Holmes, before Peter Cushing took over) has discovered that, in some soldiers, combat fatigue led to mental regression because they actually missed the shock of war – “Yes, you could call it an addiction to danger” – and envisages tapping into “all that potential energy, destructive energy”.

His plan to harness it, having set various veterans on jaunts where they are “dicing with death like irresponsible beatniks” (including Admiral Jackson crossing the Atlantic in Force Eight gale and chemical warfare expert Gordon Lamble “trying to climb the side of St Paul’s Cathedral when he fell”) is to be put into action via a rather mundane plot to steal the Crown Jewels (why not, I guess).

Mrs Peel: What have we got so far?
Steed: Two black roses, three corpses.
Mrs Peel: Four white feathers…
Steed: And a partridge in a pear tree.

The black roses are the Danger Makers symbol (making Steed’s access remarkably easy, announcing himself as a member of their Northern Chapter), the feathers one of failure, both appearing on the crest of Manton House, a military museum run by Colonel Adams (Fabia Drake), oblivious to the goings-on. While Steed fakes being one of the select group, Emma attempts to join up, seeking an in with Major Robertson (an eyepatched Nigel Davenport). Steed suggests: “Show him… (looking at her cleavage) Show him your bumps. He’s a part-time phrenologist”.

Maybe I’m being a bit hard on this one. There are a number of nice moments, such as Steed making up his society name; plumping for a Roman God, he naturally picks Bacchus, and receives a funny look from Peters (Moray Watson, The Quatermass Experiment, Black Orchid). There’s also a lovely punchline to the scene in which Emma receives a box of chocolates from Robertson, and Steed warns her not to touch it while he apparently inspects it for explosives:

Steed: Whatever you do, don’t touch the wrapped ones.
Mrs Peel: Why not?
Steed: Cos I like ‘em.

Mrs Peel’s initiation, in which she plays a deadly, full-scale version of the wire loop game (touch the sides and she’s electrocuted), moving along seesaws, is a masterful set piece, full of sweaty close-ups from the onlookers (and an impromptu cough from Robertson).

And then there’s Steed, who was unable to hoodwink Apollo that he was a member, obviously, facing his would-be executioner with disarming cheerfulness:

He appeals Robertson’s flair for jeopardy, persuading him they should both have an equal chance of taking the gun, placed on the table. They sit opposite each other, the Major beginning a count to three. Robertson doesn’t get to two when Steed plucks up the gun and promptly hits him over the head with it (“Sorry, Major. I never did believe in rules”). Ungentlemanly, but very amusing.

Steed: How did you get out?
Mrs Peel: I knotted some sheets.
Steed: Oh, that old thing.
Mrs Peel: Well, originality didn’t seem imperative at the time.

Emma, of course, proves just as resourceful in her own off-camera way (above). Despite the high points, though, this one tends to the rather dry and militaristic elsewhere, right down to a Journey’s End-inspired character name (Stanhope, played by Adrian Ropes, although he’s more of a Raleigh, plot-wise). The laugh-off is similarly breathless to The Girl from Auntie’s verbiage, only with Steed delivering this time, before their stunt doubles head off in go-carts:

Mrs Peel: Steed, I still don’t understand how you stumbled on the Danger Makers.
Steed: Simple, Mrs Peel. When Groves died, I saw Lowry, who put me on to Lamble, who led me to Robertson, through whom I met Stanhope, who later was killed, who passed on info about Manton, where I met Colonel Adams. I simply put two and two together.
Mrs Peel: Elementary.
Steed: Basic.
Mrs Peel: Shall we drive? 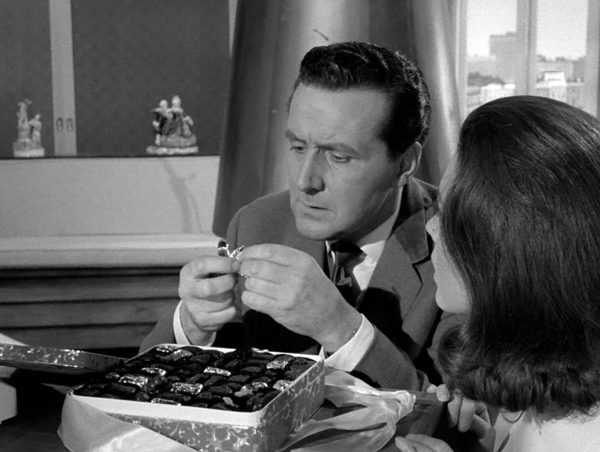 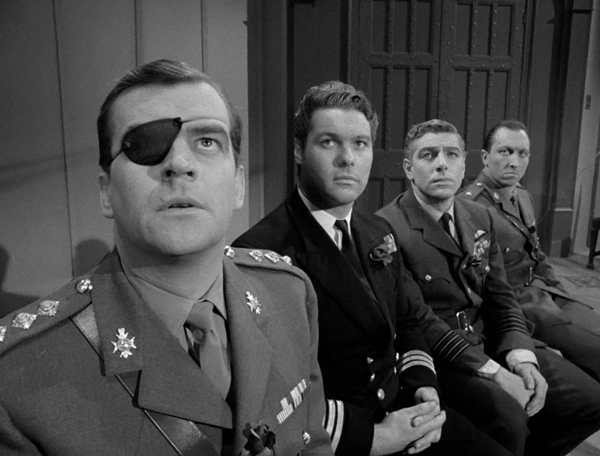 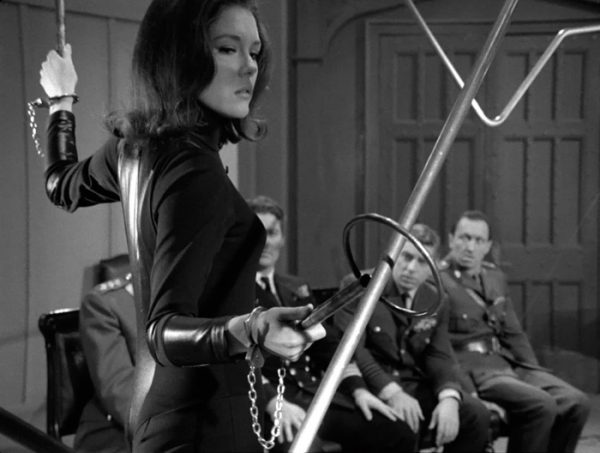 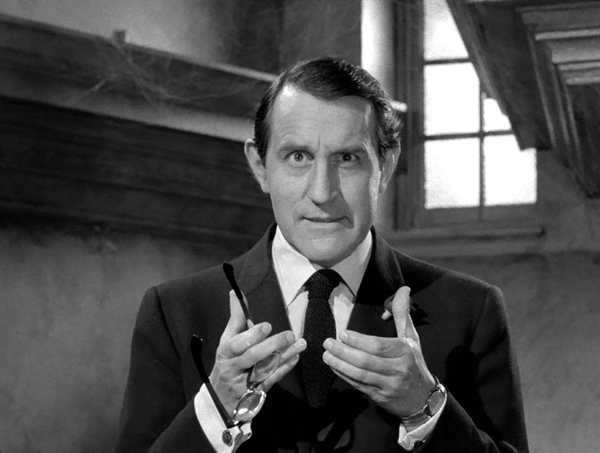 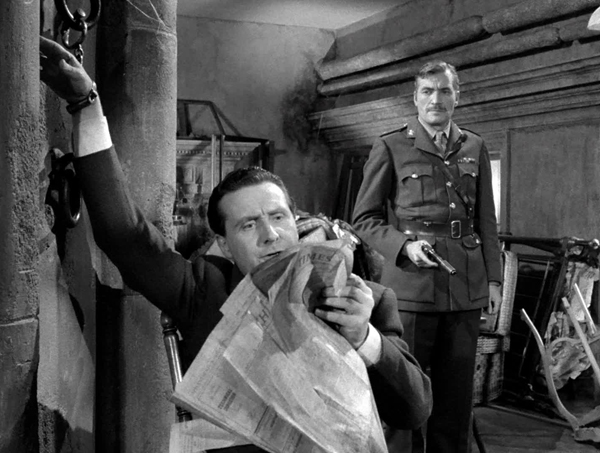