By Jove, the natives are restless tonight.

I wonder if Death at Bargain Prices’ camping scene, suggestive of an exotic clime but based in a department store, was an inspiration for Small Game for Big Hunters’ more protracted excursion to the African country of Kalaya… in Hertfordshire. Gerry O’Hara, in his second of two episodes for the show again delivers on the atmosphere, making the most of Philip Levene’s teleplay.

Steed: Had a spot of bother with the natives. A full-blown savage, with a very unfriendly disposition.
Mrs Peel: Oh, come now, Steed.

It’s also an episode big on the colonial critique, not to mention innocently dipping into the conspiratorial waters of spreading diseases (and testing vaccines) in third world countries. The teaser is a particular good one, as a man (Peter Thomas), pursued through thick jungle, ends up with an arrow in his back, collapsing near a sign that reads “London 23 Miles”.

Mrs Peel investigates signs of a Kalayan tribal influence (the Shirenzai symbol, “a more dread form of voodoo”) while Steed gets personal, calling on Colonel Rawlings (Bill Fraser, General Grugger in Meglos), who lives inside a biodome-equivalent jungle.

Promoting suggestions of the supernatural is Professor Swain (Liam Redmond), whose misdirections (“He sleeps the sleep of the living dead. There’s no awakening him. Not by any means I have at my command”) mask his own dastardly doings, since he’s the ringleader of a plot to take back control of Kalaya by introducing tse tse flies carrying a strain of sleeping sickness that will render the whole country paralysed within a week.

Steed: He’s got a nice line in au pairs.
Trent: He’s got a whole tribe of them out there.

Swain’s supported by game hunter Simon Trent (James Villiers), given to making threatening allusions (“This time of day, if I see something moving, it’s all I can do to stop myself from shooting it”) and detaining Steed at the residence on account of the hazardous rivers during monsoon season.

Indulging the delusions of an eccentric becomes an increasingly common trope of the series, one we previously saw with Sir Horace Winslip in The Gravediggers. Colonel Rawlings is a Blimpish type withdrawn into his own oblivious world (“He couldn’t survive the winds of change, softened his brain. He still thinks he’s there”) while his assistants get up to no good under his nose.

Trent: Tomorrow we fly back to Kalaya, Steed. We’re going back. Back. And we’re taking this with us. Thousands of the little beasties, that’s all we need. And once they’re release in a climate like that…
Steed: They breed like flies?
Trent: Yes, like flies. They breed like flies.
Swain: The whole country will be paralysed in a week, and then we take over. A pretty plan, don’t you think?

Indeed, during the finale, while an alluring Emma arrives impersonating Lala (Esther Anderson) with a flower in her hair, the Colonel wanders around making irrelevant comments about a notional uprising (“Take them some coloured beads. Always seems to help”; “By Jove, the natives are restless tonight, A firm hand, that’s what’s needed. A firm hand”).

Not that the rest of it is exactly played straight, with Steed swinging in on a vine to Emma’s rescue (“Me Steed”; “Me Emma”) and putting paid to Trent after confidently telling him, in 007 fashion, “Mauser, single barrel. You’ve had your five”. Subsequently grappling with him, a further shot goes off (“My arithmetic is shocking!”) Villiers makes for a low key but effective villain, Redmond less so, meaning that some of his nefarious lines fall a bit flat (“All that work almost spoiled because of you. That arouses me to violence”).

Notable in the episode are two persons of colour, the aforementioned Anderson and Paul Danquah as Razafi, Kalayan Secret Service. The former has little in the way of dialogue, but the latter makes a strong impression when he reveals his undercover status to Steed. I hadn’t realised the series’ predominant absence of ethnic actors was intentional (“Clemens explains that the success of ‘THE AVENGERS’ is due to its element of fantasy. And all the taboos come under the heading of social realities…”) It’s a thin argument, particularly since it is broken on several occasions (more recently, Brian True-May tried out a similar line with Midsommer Murders).

Steed: I once shot a bull elephant myself.
Outfitter: Really? What did you use?
Steed: F8 at 500ths of a second, and a small roll of film.

Amusing interludes include Steed calling on Tropic Outfitters early on, precise in their knowledge (“My goodness, sir. This is a relic. One of our old mid-tropical five-button broad weaves”) and up with the sales patter (“No matter where you are, steaming jungle, burning bush or arid desert, we always get your order through”).

So too, after his altercation with a Kalayan native, Steed is sanguine about the damage done (above). There are some nice edits, notably Emma awaking from leafing through a book on tribal rituals and seeing a “real” tribesman. Steed plays what looks like an intense game of cards with the Colonel, only for it to be revealed as Snap! The laugh-off is merely so-so, however (Steed and Emma in a rowing boat, she telling him to start the other engine, he beginning to paddle in response). 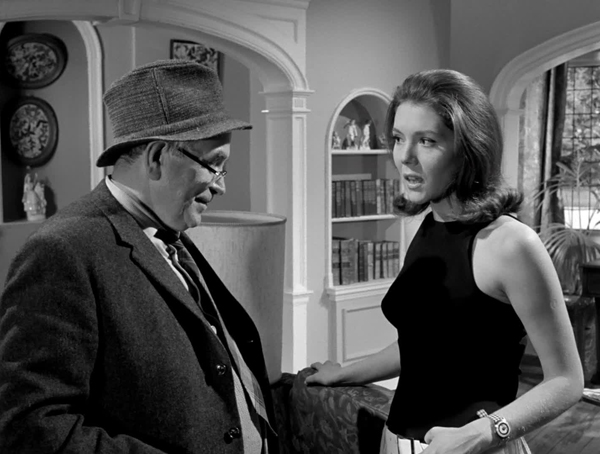 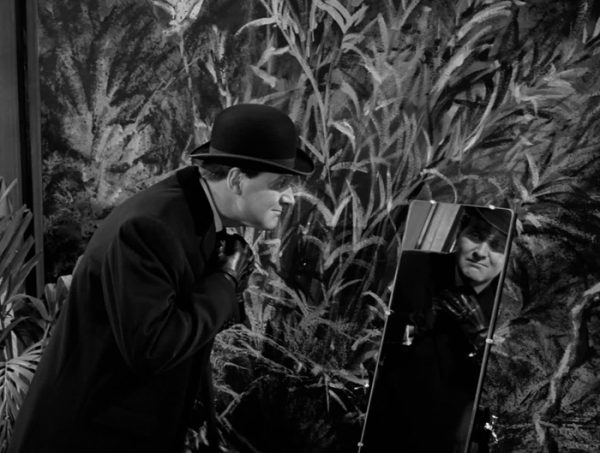 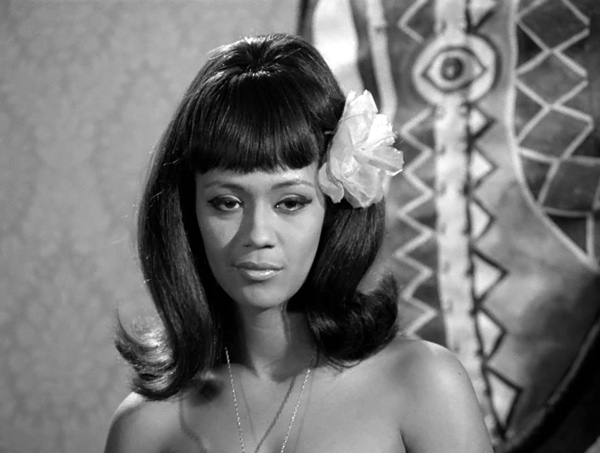 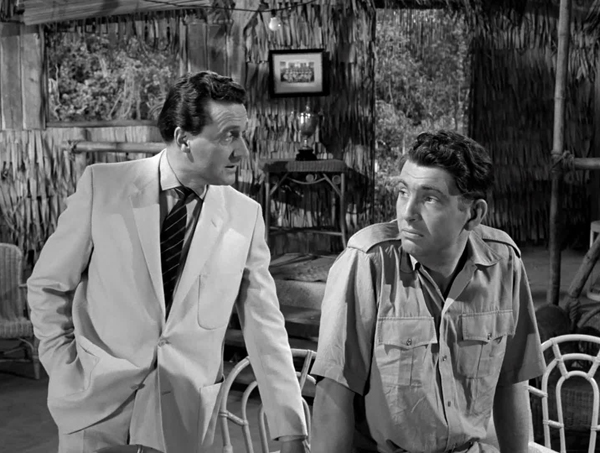 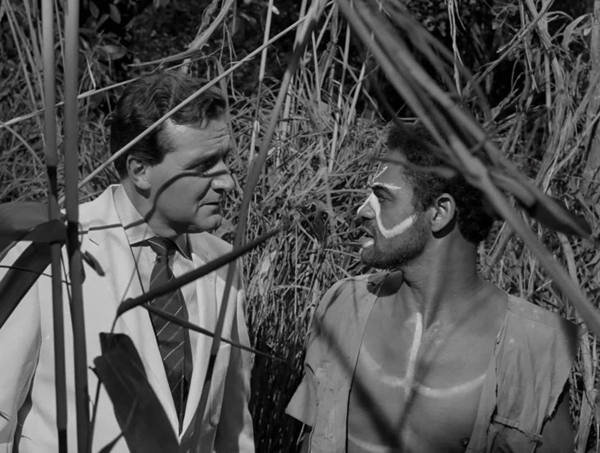 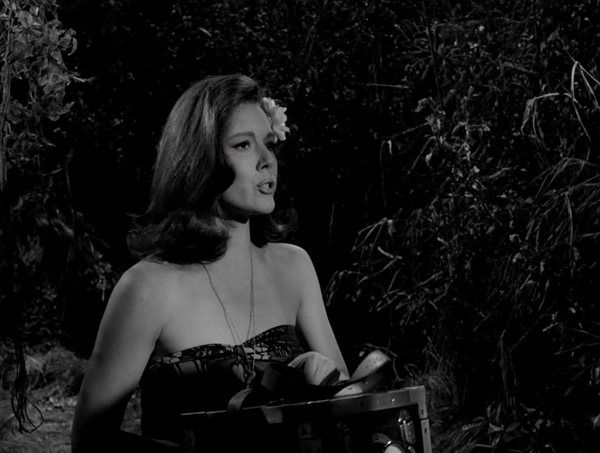