But one soldier, against seventeen. What are you going to do?

Now that a bona-fide Blade Runner sequel has arrived, we can stop clutching at straws of movies that may/not be set in the same universe. Ridley Scott, growing more senile with each passing minute, considers Alien to exist in the same continuity, but David Webb Peoples got there first with “sidequel” Soldier, enthusiastically partnered by Paul WS Anderson. Unfortunately, no one benefits from the association, as Soldier is a downright terrible movie.

I have a bit of a blind spot for Peoples, on the basis that Unforgiven is a masterpiece of a screenplay, Twelve Monkeys is perfectly formed and his contribution to Blade Runner helped engineer an all-time-classic. I assume everything he touches ought to be exemplary, but I struggle to see how Soldier, even without having been force-fed through a PWSA meat grinder, could have been one to treasure.

Shane reconfigured on a backwater trash heap planet, complete with mute child, palpitating-with-desire mother and blithely unaware father? It sounds like a recipe for disaster. But then, Logan remixed the Shane formula recently to at least partial success, so maybe it is all down to PWSA (and perhaps Tony Gilroy’s uncredited rewrite).

But anyone can have an off day, and Soldier might be that. There are certainly too few produced Peoples’ projects in the world. Given how long it takes to get some of his screenplays on screen (this, Unforgiven), maybe his Sergeant Rock will become a movie one day; Tarantino feted it as of such quality that, if he were to direct someone else’s work, it would be the one he’d choose (Joel Silver, attached to Rock as producer, levels the charge that the director lifted the premise for Inglorious Basterds).

The Soldier screenplay sat on a shelf for fifteen years before PWSA became flavour of the month (for reasons that remain elusive) and decided he wanted some of that, and Stallone and Keanu – curiously, Todd’s “I’m going to kill them all, sir” is paraphrased by Keanu in John Wick Chapter 2 – were mooted before Russell took the gig. Kurt was paid a ludicrous $20m (although he did get into uber-shape at a not exactly spring chicken age of 48, and PWSA delayed shooting for him to get so pumped, making the almost-as-botched Event Horizon in the meantime). That amounted to a third of the overall budget, and he certainly wasn’t being paid for loquacity; notably, Russell’s dialogue was of minimalist Mad Max 2 proportions, amounting to 104 words.

The movie proceeded to flop hard, grossing a mere $14m in the US. Russell disappeared from the screens for three years and didn’t take another action role, while it took PWSA four years to get his next of the ground. It proved his greatest success story; the Resident Evil franchise would endure for fifteen years (to date), with the director helming four (and writing all) of them.

The Blade Runner link can be found tangibly with the appearance of one of that movie’s spinners, but there are also references to taciturn protagonist Todd 3465’s military career; he fought in the Battle of Tannhauser Gate and did a stint on the Shoulder of Orion (other escapades include the Len Deighton-sounding Moscow Incident, the War of the Six Cities and the Battle of the Argentine Moons, as well as references to other Russell movies, Star Trek II and The Hitchhiker’s Guide to the Galaxy).

Kurt and his co-supermen in Soldier aren’t replicants, however; they’re genetically engineered and brainwashed humans, products of the Adam Project, indoctrinated from an early age into becoming emotionless – fear aside – obedient tools of the military. The introductory montage follows Todd from year zero in 1996 up to his forties (as a youngster he’s played by Russell’s son Wyatt), at which point, following an altercation with new model Jason Scott Lee – who, one might infer, is a replicant, although the word is never used – he’s unceremoniously labelled obsolete and dumped on the planet where the lion’s share of the Shane-esque action will occur.

Todd curtly gets to know the settlers, keeping mostly mum but sharing meaningful looks with mum, and then nearly kills Michael Chilkis, is banished, invited back… and just in time! Those dastardly replacements have arrived, and evil Jason Isaacs (will you just look at his evil moustache) is intent on using the unofficial inhabitants as cannon fodder in a training exercise of his own devising.

This is so bare bones and linear an idea that the results are entirely what a director makes of them, and PWSA makes an indigestible stodge rather than a flavoursome pudding. He commented, “What I’d originally planned would have been much better, ultimately, than what we put on screen”, but his career, whatever else one can say of it (and fair’s fair, he does call shots on clear, coherent action) isn’t bursting with depth, resonance, subtlety or atmosphere.

PWSA indirectly blamed Kurt’s desire to remain clean in getting ripped (i.e. he didn’t want to take steroids, so it took a while, by which time Soldier had become a studio-based rather than location shoot). Certainly, the studio work is pretty awful, so the movie could only have been improved by getting outside, but you can get an indoors shoot to look great (Legend, for example). It doesn’t have to look like the sets are sets; David Tatterstall’s lensing is resolutely lifeless (he went onto the Star Wars prequel trilogy, having worked with Lucas on Young Indiana Jones) and inert (it’s a problem you can also see in Die Another Day).

So there’s that. The bigger problem is that he doesn’t know his actors. Sure, he knows actors (Sean Pertwee and Isaacs come from his previous Shopping and Event Horizon), but they’re inhabiting what are at best caricatures, assembling a bunch of clichés that tend to the ridiculous or embarrassing. He has no idea how to make the attraction between Sandra (Connie Nielsen) and Todd work, so we’re dealt a series of clumsy, laughable close-ups of Sandra glowing in response to his manliness while Todd stares transfixed at her nipples.

The turning point of the settlors realising Todd’s a good guy comes when wee imp Nathan kills a vicious viper with a shoe, an act of violence Todd taught him (the reactionary undercurrent being that you need a guy around who can encourage mass slaughter, as you’ll only bleed out after getting your leg blown off if you settle for knitwearing Sean Pertwee). It’s as hackneyed as its sounds.

And, confined to his studio set, it feels as if Todd exiled himself – wearing what looks like a Doctor Who scarf – just over the next pile of debris, rather than any great distance away (he also cries at his loss of company, the poor hulking lug). It’s a fairly cosy, homely looking bit of pipe, mind.

Anderson’s action is also rather clunky, evidently coming from the James Cameron school of slo-mo is good but without his master’s accompanying adeptness at pacing and escalation (editor Martin Hunter also worked with PWSA on Event Horizon, which is a complete mess). He’s also evidently encouraged Joel McNeely to ape James Horner on the soundtrack, as there’s a demonstrative horn section, but they fail to imbue any urgency or rhythm.

And you can see the director borrowing, borrowing, borrowing, rather than establishing his own distinctive style. From Cameron, obviously. From Lucas (the trash compartment on the ship from which Russell is expended). From Coppola (Todd in combat mode descending into water as he takes out Caine 607’s men). From Verhoeven (Todd’s flashbacks are very Robocop).

Gary Busey shows up as Todd’s commander Church, and he has a modicum of impact (Isaacs never gets beyond ham villainy, and having him piss pineapple juice is as puerile as you’d expect from the director). Church’s line “Well, maybe you should have made them smart instead of fast” is one of the few of note. Jason Scott Lee glowers implacably as Caine 607, but is otherwise a non-event. Michael Chiklis is in cuddly sidekick mode, post-Seinfeld, pre-Shield.

The ineffectiveness of the cast might not matter so much if Anderson had visualised an immersive world, but he has only derivative imagery to call on, applied to a hokey and inert journey to self-awareness (Todd hugs the kid at the end). We don’t even get the consolation of Shane/Max/Todd striding off nobly and heroically into the sunset; he’s been integrated rather unconvincingly (with his old comrades to boot) into the colonists’ group, and will no doubt make a curious, latently violent, staunchly disciplinarian husband and surrogate father.

We can only be grateful there was never a Soldier sequel (and one had been mooted, prior to opening weekend). None of Kurt’s sci-fi jaunts in the ’90s were great, but they’re on a sliding scale of averageness to awfulness (Stargate, followed by Escape from L.A., followed by this). This one isn’t on him any more than L.A. is, though. Soldier’s as memorable as its title, but less streamlined. Even at under 100 minutes it plods drearily and wearily. It’s just a plain bad film. 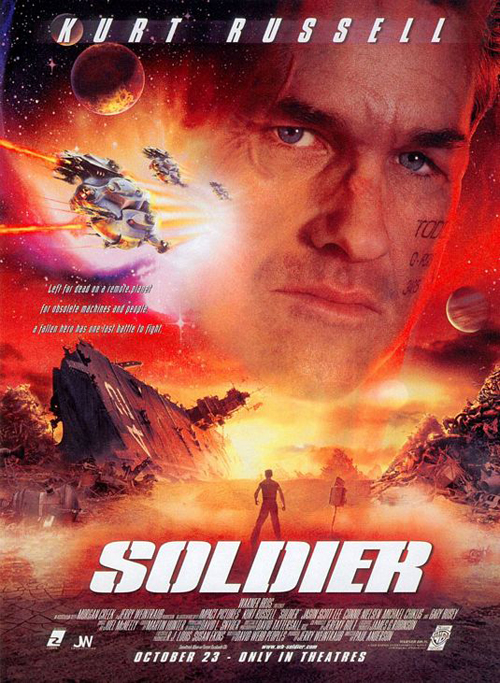