Kill the earthworm, Steed, and ultimately you kill everything. Soil, birds, animals, man.

Revisiting Season Four, several episodes have fallen slightly in my estimation, but Silent Dust (along with Dial a Deadly Number) is one that has gone up. The plot isn’t all that, continuing the horticultural (and pesticide) theme of Man-Eater of Surrey Green, but it has a great supporting cast, and in Avengers terms that’s often the difference between a hit and a dud.

Juggins: And what if they don’t pay up?
Omrod: Oh, they will. After we destroy Dorset.

The prologue shows birds dropping dead (so decisively, they look taxidermised, although much more convincingly than the plastic bat on a wire that menaces Emma later), meaning Steed and Mrs Peel are called on to investigate rural crimes in rural climes, she posing as a representative for the British Trust for Ornithology and catching the eye of local rich landed fellow Omrod (William Franklyn, Quatermass 2, Cul-De-Sac, GBH). Who, of course, is up to no good, planning to hold the country to ransom with his three accomplices. They want £40m, or they will release a failed-and-deadly-to-all-plant-life organochlorine fertiliser.

A very definite environmental theme can be found in this one, much as in the earlier The Grandeur That Was Rome (the very visible hunt protesting also signposts current themes in Roger Marshall’s teleplay). Steed is informed “Kill the earthworm, Steed, and ultimately you kill everything. Soil, birds, animals, man”. If Sir Manfred Fellows (Charles Lloyd Pack, father of Roger and grandfather of Emily Lloyd) had changed worms for bees, he’d be remarkably topical. Sir Manfred, of Fellows Fertilisers, meanwhile, reliably informs Steed regarding marketing that “If it smells like peaches, people won’t believe it does any fertilising. We had a winner last year. Smelled like old socks”.

There’s a subplot concerning Claire Prendergast (Isobel Black), the daughter of the man who developed Silent Dust, that fails to go anywhere very interesting (aside from Mrs Peel posing to have her bust sculpted. No, not that bust). Omrod brought the scientist to the village (Manderley, but there are no du Maurier references).

Omrod’s cohorts, who will get £10m a piece, are thuggish Juggins (Jack Watson, Edge of Darkness), Miss Snow (Joanna Wake), whose family has lived in the area for centuries and whose land recently turned sour (Omrod has only been there fourteen years, so is considered a newbie) and Croft (Norman Bird, Mr Braithwaite in Worzel Gummidge, amongst many others), who is out of sorts over not receiving royalties for the roses he bred.

Juggins: I just slit a sow’s throat. You could hear the squeal three mile away.

All these characters are memorable, with Juggins a “bloodthirsty brute” keen on slaughtering bullocks and knocking back scrumpy by the flagon. He also has a hankering to breed cows (“You’ll be able to cross an Aberdeen Angus with a cottage loaf” Omrod tells him of his prospective fortune). When he hears Steed is looking for land to buy, he’s forthright with his threats (“I’ll give him some free, for nothing… Ay, six foot of it for nothing”).

Juggins particularly relishes the hunt (“Tally ho. Tally bloody ho”), announcing “I’ve got a brand-new cleaver that needs christening”, so it’s particularly fitting the he should be dispatched in embarrassing fashion by Steed, on horseback, with a hunt sab “Down with violence” placard smashed over his head.

Croft is less notable (“His roses bloom but he got the blight”), although one must assume that, during the hunt climax, he gets as far as he does attempting to do for Steed with a sickle because Steed has already taken a bit of wear and tear previously.

Wake, who has something of the Joan Greenwood about her delivery, is one of the episode’s great delights, her indulgent interaction with Steed (putting on the extra-posh gentry pose) proving laugh-out-loud funny. Steed furnishes her with advice on her horse’s symptoms (“Fire the vet. Don’t let the horse lie down. Keep him walking”), leading to the following exchange:

Miss Snow: Tell me, do you know a lot about horses, Mr Steed?
Steed: Do a bit of steeplechasing.
Miss Snow: Oh? I’d have thought you were a little too tall in the saddle.
Steed: Oh, I don’t know. Comes in handy. Pop the old feet down. Help the animal over the sticks.

Besides Snow’s amused response, there’s Emma’s reaction to “too tall in saddle” and as is her initial one to Steed going to talk to Snow (“I’ll see what I can pick up here”: “Mmm, I’m sure you will… Pick up something”). Later, when it’s decided Steed must be rid of, Miss Snow comments “Such a pity, he’s just the sort of risk I fancy”.

There’s further innuendo when Emma and Steed are sussing out the suspects: “Miss Snow? She’s got a good seat” observes Mrs Peel. “She’s got a good seat” concurs Steed. Miss Snow later beckons Steed aside on the pretext of further horse problems: “Can’t keep him away from the trough. Just seems to want to keep on drinking all the time”. “Oh dear. Once had an auntie like that” he replies. Appropriately, its Emma who takes her down during the hunt.

Omrod: Ever done any hunting, Mrs Peel?
Mrs Peel: A little.
Omrod: Fascinating. Pit your wits against a master of craftiness and deception. Point and counterpoint, finally cornering him. And killing. It’s a wonderful day spent. Well, what about it?
Mrs Peel: I’ll let you know.

Franklyn also makes the most of enjoying his villainy, be it putting the moves on Mrs Peel or engaging in an exchange with Steed, now up and about after being shot by gamekeeper Mellors (Conrad Phillips, also seen as a doctor in The Prisoner episode The General). Neither shakes hands when Steed arrives unannounced. “Sorry, oil” comments Ormrod, who has been seeing to his shotgun. “Sorry, buckshot” replies the slinged Steed.

Steed: He mistook me for a partridge. Seriously ruffled my, eh, wing feathers.
Omrod: Oh, I must speak to him. Tell him to be a little more–
Steed: Accurate?
Omrod: Careful.

The incident with Steed and Mellors takes place after the former has been earlier warned off (“I have orders to shoot poachers”. “That’ll keep them down” Steed ripostes cheerfully). He’s then winged by Mellors (there’s no visible blood, however) and steps in an animal trap, hiding from the gamekeeper, before later stumbling in on Emma in one of the farm buildings.

The scene in which she extracts the bullet finds Steed hallucinating himself as a sheriff, along with Wild West wanted posters for Omrod and Mellors. Emma’s a quack doctor, sporting a moustache, mutton chops and an over-sized bottle of Red Eye, extracting an enormous bullet (“I prefer you clean shaven” he comments, when he comes around). Perhaps the dream sequences in Too Many Christmas Trees went down so well they thought they’d have some more of that.

Also worthy of mention is the great Aubrey Morris (The Wicker Man, The Prisoner’s Dance of the Dead, The Hitch Hiker’s Guide to the Galaxy, Deadwood) as birdwatcher Quince, who is concerned about the missing martlets and ends up strangled by Juggins and buried under a pile of apples (“Cut off in mid-warble?”).

Steed: As you know, in this estuary there used to be all sorts of lovely martlets. ‘The temple-haunting martlet.’
Mrs Peel: Macbeth, Act 1, Scene 2, Banquo.

Steed and Mrs Peel as should be evident, are on fine form. There’s an amusing opening scene in a punt, with Steed chilling a rosé in the river (“Ah, I like a wine that fights back”) and advising Emma why they should be concerned over the absence of feathered friends (“Think of the poor bird watchers. Their gumboots and disappointed faces”).

Mrs Peel obliges with much of the action work, as per usual, although it has to be said common sense deserts her on several occasions, most notably when Omrod confronts her with a gun; she overcomes him, then leaves it to flee from Juggins.

The coda is one of the most heightened yet, with the duo in a balloon, Emma concerned over whether he knows how to control one of these things; Steed giving a puzzle look in response to “And what happens when we run out of ballast?” 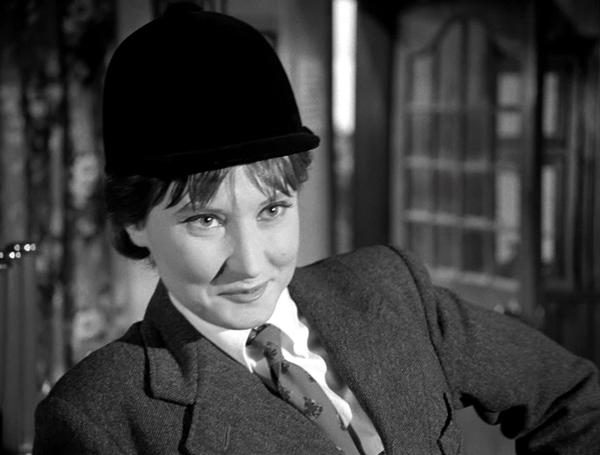 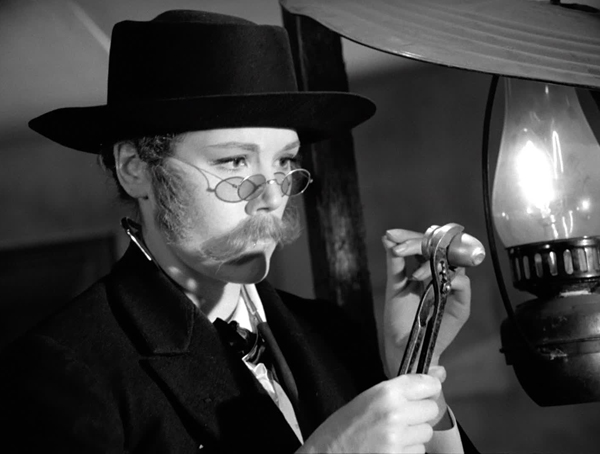 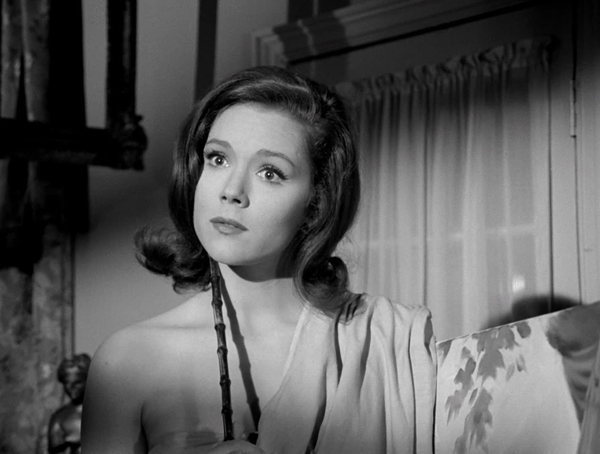 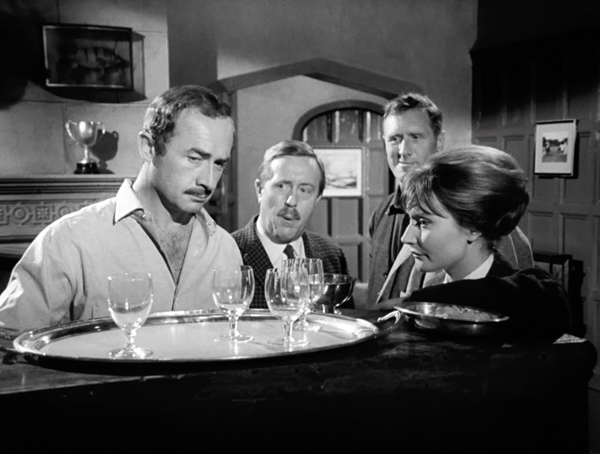 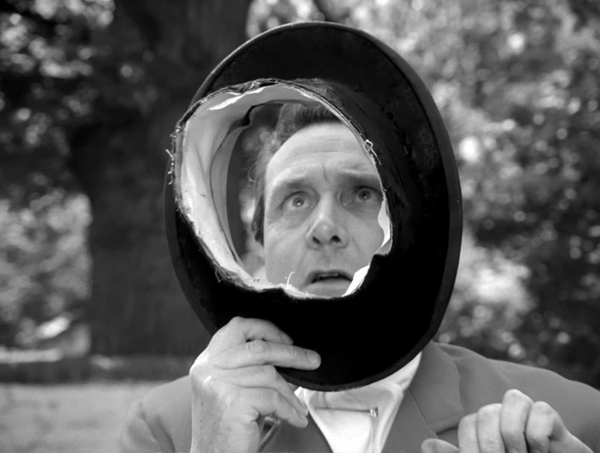 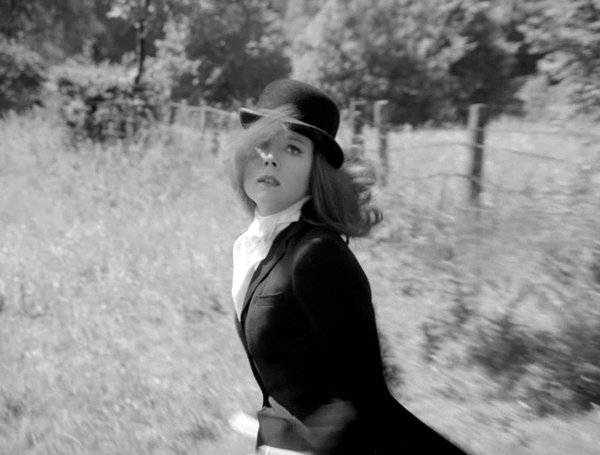