Now here’s a Stephen King/Richard Bachman adaptation that could do with a remake. The actual date of futuristic dystopias clocking round is usually a cue to compare and contrast, and no doubt in two years there will be legion Blade Runner articles doing precisely that (and damning/feting the worthy/tragic sequel). Actually, they might be doing it with The Running Man too, since it’s only a worldwide economic collapse announced in the opening crawl that occurred in 2017; the events of the movie also take place two years from now. Nevertheless, it has garnered some attention (most notably an Empire article) this year. Working against celebrating its anniversary on either date is that isn’t much cop, nor was it ever considered to be.

The Running Man came at the point when Arnie was transitioning from anything-will-do actioners to picking his collaborators more diligently (he’d already scored with Cameron, and some might say Milius, too, and incoming were McTiernan – Predator came out five months before this – and Hill). One might suggest it’s appropriate that a movie about a TV show is the spit of a TV movie, but the truth is rather less meta. It came about through several firings (George P Cosmatos, Carl Schenkel, Ferdinand Fairfax) and leftfield choices (Alex Cox was asked, but was making Walker) before Andrew Davis (who would later direct Schwarzenegger in Collateral Damage) was handed the reins but promptly dismissed when he fell behind schedule and went over budget.

These decisions came from producer Rob Cohen, who has most recently served up dreck like The Mummy: Tomb of the Dragon Emperor and Alex Cross as a director, so it’s probably safe to say he doesn’t know a decently-shot movie when he sees it. If he did, he certainly wouldn’t have hired Starsky, Paul Michael Glaser. Glaser had previously helmed one solitary Michael Mann-produced movie and served time on various TV stints, including an episode of the short-lived Otherworld titled, rather gloriously, Village of the Motorpigs. Arnie thought Glaser’s work was lousy too, if that’s any comfort.

By 2017, the world economy has collapsed. Food, natural resources and oil are in short supply. A police state, divided into paramilitary zones, rules with an iron fist.

Television is controlled by the state and a sadistic game show called The Running Man has become the most popular programme in history. All art, music and communications are censored. No dissent is tolerated and yet a small resistance movement has managed to survive underground.

When high-tech gladiators are not enough to suppress the people’s yearning for freedom…more direct methods become necessary.

The Running Man departs significantly from King’s short story, although that’s no bad thing in itself, unless you’re King, and the “reality TV to the death” idea was a good couple of decades old even at the time (a lawsuit alleging King mined Robert Scheckley’s 1958 The Prize of Peril was eventually thrown out on appeal). It had been the inspiration for Doctor Who story Vengeance on Varos only two years earlier. It would, of course, gain enormous currency quarter of a century on with The Hunger Games (with similar, somewhat stretching it attestations regarding its depth and resonance).

There’s more than enough potential for sharp satire in Steven E de Souza’s screenplay (he had previously worked on Arnie’s Commando, mind), but it needed a sympathetic eye to bring such an element out; that might have been Cox (although he never played well with studio suits). It might have been Verhoeven (whose Robocop hit almost all the targets Running Man missed the same year). It definitely wasn’t the less-than-journeyman Glaser.

A few gems of satirical content do shine through, however, and I don’t mean a TV show called The Hate Boat. The ad for Climbing for Dollars, in which a contestant is about to be mauled by hungry Dobermans is flat-out hilarious. Some of the dialogue is pretty sharp (when Maria Conchita Alonso’s poor innocent Amber is introduced as a contestant, it’s with the tutting, just-rewards explanation that she “flouted the law, and traditional morality all of her life”).

Killian: They want ratings, I can get them ten points for biceps alone.

Richard Dawson is given little in the way of spectacular dialogue as slimy host Damon Killian, but you wouldn’t know it as he does so much to make the part his own. He’s all smiles to a janitor who bumps into him but promptly has him fired out of earshot, and his repartee with favoured old lady guest Agnes – “I want a kiss, now, a big kiss, but remember… no tongues” – is just the kind of ingratiating spiel that sold many a gameshow during the ’80s (although, giving Agnes the sweary “That boy is one mean motherfucker” on picking Ben Richards to score the next kill is crude and cheap). There’s little resonance to Killian’s final speech (“This is television, that’s all it is. It has nothing to do with people, it’s to do with rating!”), although it does at least recognise that he’s a disposable cog in the machine.

Perhaps surprisingly, it’s Jesse Ventura’s Captain Freedom who makes the biggest impact in this vein, shown off in note-perfect workout parody videos à la Jane Fonda (Paula Abdul did the movie’s choreography, explaining the high standard in that department; no, straight up, I’m serious), looking understandably pissed at being cut off mid-flow by Killian and, when summoned to return to stalker territory, having a hissy fit over his wardrobe (“This stuff is garbage!”) as he cites the code of the gladiator. Predator may have made his big screen name, but this other Arnie showing comes a close second.

The Running Man is not only foisted with TV direction, it looks cheap to boot (but it wasn’t that cheap, if Wikipedia’s $27m price tag is to be believed: nearly $60m today). One might suggest, in its favour, that cinematographer Thomas Del Ruth (his career, amongst TV fare such as Mrs Columbo, includes gems like Death Wish II and Look Who’s Talking Too) keeps things dark and murky, but that rather belies this being the most popular TV show in history. You’d expect something as glossy as Arnie’s spandex – much mocked, but their gaudiness is one of the few things the visuals get right – rather than a succession of under-lit basements constituting “400 square blocks left over from the big quake of ’97” (the same year Snake Plissken escaped from New York).

Richards: Oh, he had to split.

Perhaps the one thing to say in Glaser’s favour is that he doesn’t play up the violence, which is incredibly gratuitous (I can only imagine what this would have looked like under Verhoeven). There’s an exploding head early on, during a prison break (laying the groundwork for Fortress). Arnie’s Ben Richard’s takes out his gladiatorial opponents with due deftness, armed with necessarily appalling quips, but little of the carnage has an impact. He strangles Sub Zero (Professor Toru Tanaka, also of Pee Wee’s Big Adventure) with barbed wire (“Now, plain Zero…. He was a real pain in the neck”), but Glaser bathes the sequence in a red filter.

So too Buzzsaw (Gus Rethwisch) having his chainsaw turned on himself, crotchwards; Glaser refrains from showing the viscera. Fireball (Jim Brown) is ignited with his blowtorch (“How about a light?”) Dynamo (Erland Van Lidth De Jeude) is all intent on raping Amber (“I’ll show you dickless!”) but she electrocutes him in his underpants. There’s a desperate lack of creativity to these opponents (attacking with ice pucks?) that speaks to the execution of the picture generally.

The casting is similarly random, and as such, would go well with a double bill of Johnny Mnemonic. Alonso is, as usual, flat-out terrible. Mick Fleetwood shows up as resistance leader Mic, wearing prosthetics that make him look like Geoffrey Rush. Dweezil Zappa is his underling Stevie. Yaphet Kotto, sporting James Brown hair, is given a thankless part as Richard’s prison escape buddy.

Ben Richards: I said the crowd is unarmed!

And Arnie. Apparently, Christopher Reeve was originally pursued, which might have been a good move, certainly in presenting some genuine tension as to the outcome. Ben Richards is a good guy, a police pilot framed as the Butcher of Bakersfield after he refuses to open fire on unarmed civilians and his buddies go ahead anyway. One wonders, however, how his conscience permitted him to go along with a totalitarian regime (the Cadre) that long in the first place.

That aside, this bastion of morality takes worryingly Arnie-like pleasure in offing his opponents, including Killian (“Well, that hit the spot!”, on firing the host into a billboard for Cadre Cola). It’s also an uphill struggle to side with him when he so expressly and casually puts Amber in harm’s way, holding her hostage and warning her “And remember, I can break your neck like a chicken’s”.

For some reason, she becomes his defender (Stockholm Syndrome?) even to the point of smuggling the tape proving his innocence in her vagine for the entire contest (the role in general exhibits the worst excesses of trophy female lead casting during the period, complete with Arnie giving her a gratefully-received snog in the final scene).

Ben Richards: I’ve seen you before. You’re the asshole on TV.

There’s a general feeling of miscasting the Austrian Oak, not as severe as in Total Recall, but at no point is there the sense that Richards is an underdog going into the game, and the succession of quips (including a desperate “I’ll be back”) further serve to undermine the sense that this is anything other than a retrofitted Arnie vehicle. There’s the occasional good line (Amber threatens to throw up all over him: “Go ahead, it won’t show on this shirt” replies Richards of his Hawaiian number) but never a sense that this is firing on all Arnie cylinders.

De Souza’s screenplay features a number of elements that lack finesse, not least of which is the location of the network’s uplink facilities, conveniently in the game zone itself; the easy solution smacks of the quick-fix ending that would also conclude the following year’s They Live!, only in more downbeat fashion. Then there’s the way the previous “winners” are left around decomposing as if there aren’t any clean-up crews (surely the zone would be littered with corpses if no one tidied it after a broadcast?) They also have such perfect technology for creating fake news, it’s a wonder they need to make the game at all (of which, audience reactions tend to be much more engrossing than the action itself).

Is there anything prescient in The Running Man? Not really, no. You can tell as soon as the pixelated “running” logo appears that this is trapped in a very dated setting, and its message is accordingly rote and unremarkable. Empire would have it as a foretelling of Trumpland, but since everything has suddenly, miraculously, become so, it’s a pretty lazy take.

It does stand as a yardstick in the Arnie filmography, though. After this his projects would be polished, prestige affairs in one way or another, at least until his governorship. And King? Ironically, this is still one of his more successful adaptations financially, even though its performance was relatively middling (studios tend to think there’s more cachet in his name than there usually is… at least until It opened. Now a slew of flops will no doubt ensue, as every studio scrabbles about for every property not yet in production. And most of them will flop).

Give it a few years for The Hunger Games dust to settle, and I suspect a new Running Man movie will be bolting out of the gates, with another screenplay that pays scant attention to the short story. 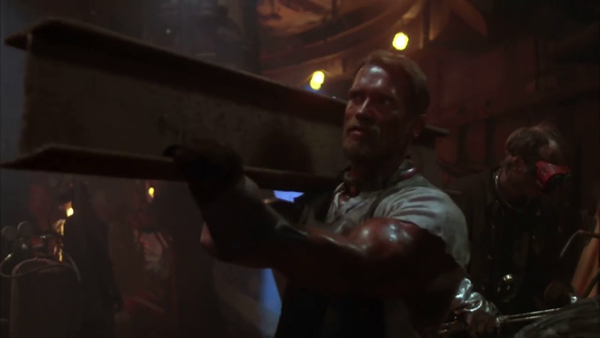 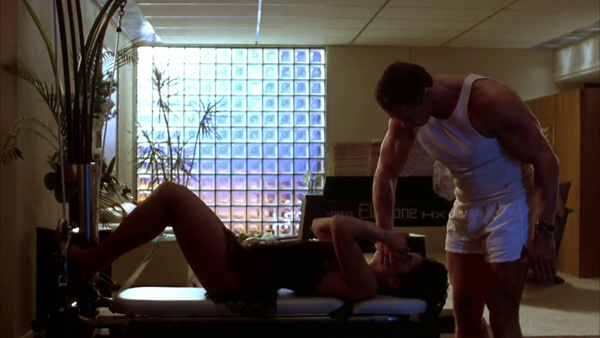 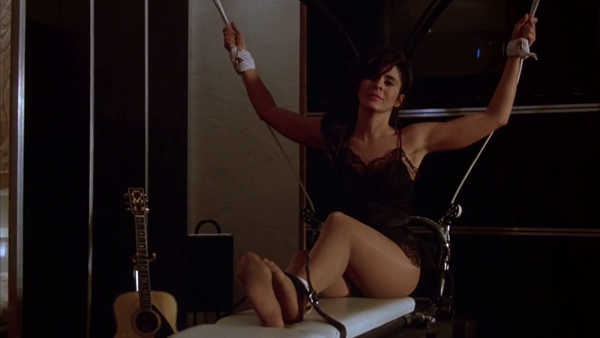 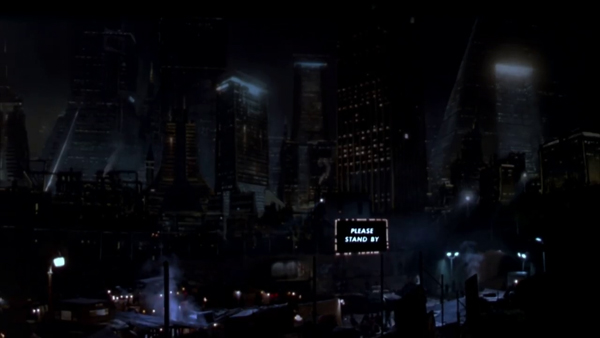 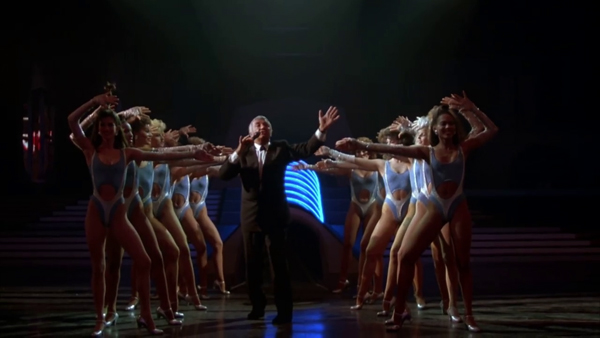 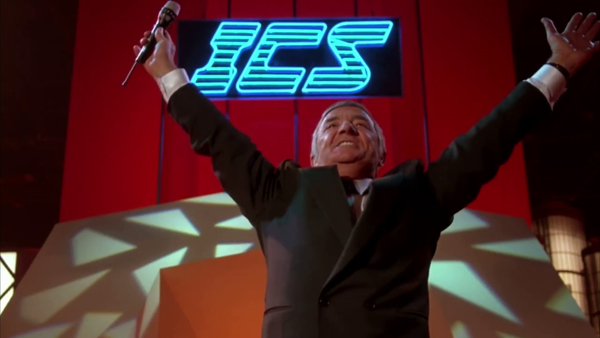 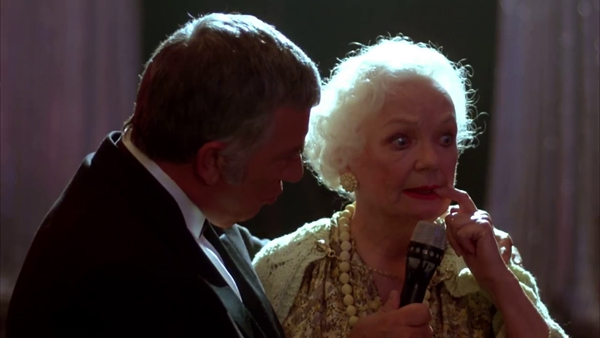 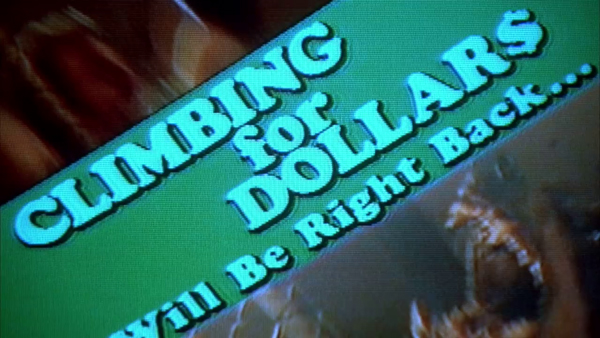 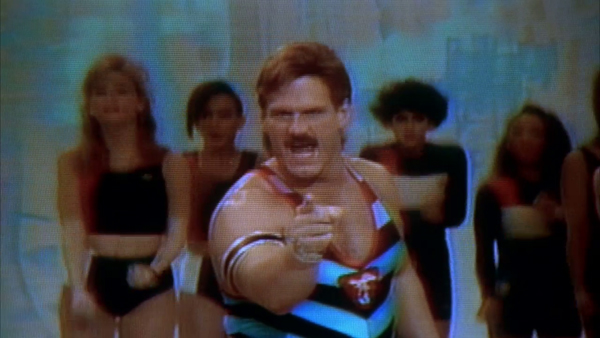 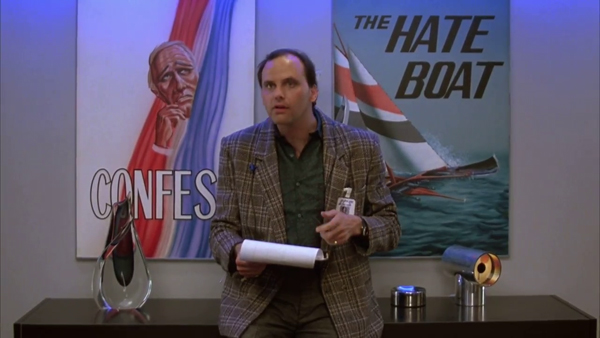 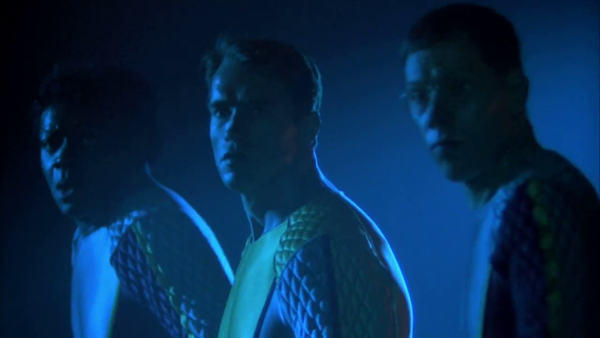 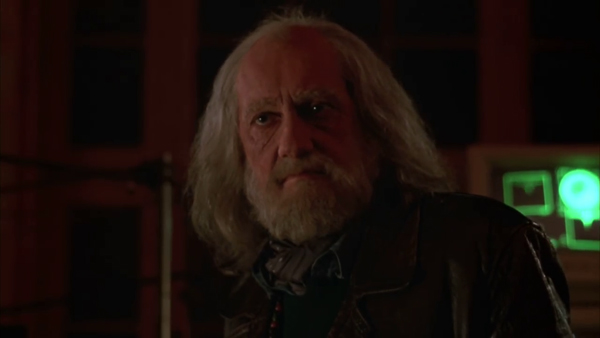 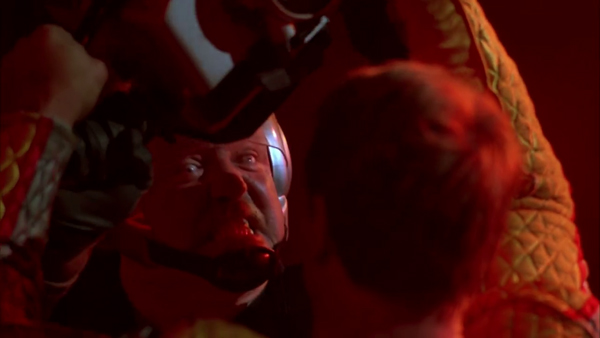 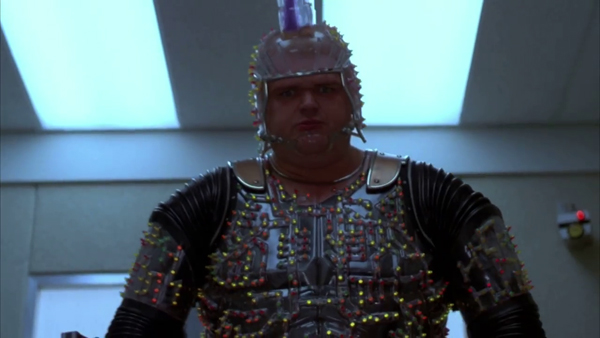 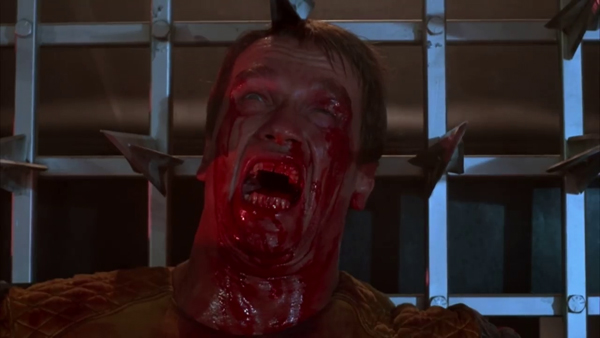 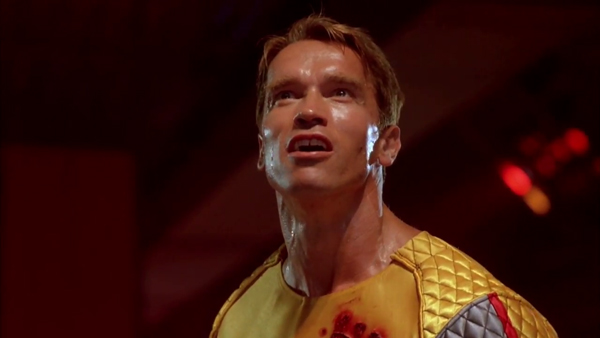 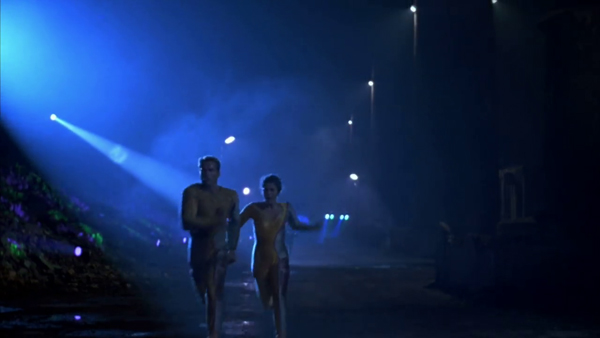