You’re the best driver in the entire universe.

Valerian and the City of a Thousand Planets
(2017)

In the aftermath of Valerian and the City of a Thousand Planet’s floundering US debut (unlike The Fifth Element, it seems doubtful that an international bonanza will compensate) and (mostly) critical mauling, there have been numerous post-mortems, ranging from the reasonable to the desperately lazy (audiences didn’t know the property; it wasn’t a sequel; it didn’t have stars; it had a weird title – none of which are an issue when something is a hit, Baby Driver, for example).

Valerian was one of my most anticipated pictures of the year, in spite of what was evidently – as much as trailers provide evidence – dubious lead casting, on the basis that The Fifth Element is a profoundly wonderful, idiosyncratic science-fiction movie, shot through with giddy Gallic humour, and this was Luc Besson returning to that genre. And it does have profoundly wonderful, idiosyncratic and giddy Gallic moments. As such, it’s much more interesting than most homogenous Hollywood product. Its fatal flaw, even more so than the charisma deficit of the principals, is one the director is usually on pretty solid ground with: pace.

Because Valerian barely musters any, even during its nominal action sequences. It comes equipped with spectacle by the shedload, but Besson seems actively disinterested in maintaining a narrative through line or anything to keep his audience on the hook. There’s a mystery to solve, but when he’s not going off at tangents, such that you wonder if there’s any point to what you’re seeing, he’s labouring the explanations; Clive Owen is obviously a bad guy from the moment we set eyes on him (and five minutes after that, he’s torturing one of the impossibly angelic alien race whose planet he decimated, just to make it abundantly clear). There seems to be a need for Valerian and Laureline to explain who did what and why at least several times in case you didn’t get it, or weren’t paying attention. Or had nodded off (someone I attended the screening with did exactly that, but unfortunately missed both explanations).

Besson has been a master of ratchetting up the tension in the past (Nikita, Leon), and even the more recent and underrated The Family has that kind of flair going for it. Here, elements you suspect might be McGuffins (the converter) are put in Laureline’s pocket and forgotten about until needed, rather than, say, stolen and pursued until the vital moment they called upon to engineer the climax. The villain is incapacitated for much of the running time, and when his (very cool-y designed) robot soldiers are finally utilised, Valerian disposes of them in dismayingly easy fashion. If Besson always has a keen visual sense (one of the best), his storytelling nous is thoroughly dislocated this time, odd for someone whose production house has made a hallmark of linear, stripped-down action-movie models.

The consequence of this, particularly as there’s little entertainment value in kicking about with the leads, is that the picture relies almost entirely on vignettes or asides to maintain interest. As such, it starts off quite beautifully with the kind of visual and aural accompaniment you’d expect from The Fifth Element director, twenty years on; the development of the central space station Alpha is charted over the course of eight centuries to the soundtrack of Space Oddity (seriously, for such an over-used – but ever-brilliant – song, Besson makes it fresh again). It’s funny, clever, spry and deceptively simple. And then the picture proper starts.

But the establishing sequence, as Valerian and Laureline, mystifyingly experienced police special agents, intercept a black-market deal selling a converter (a cute little creature that replicates anything it ingests, including reproducing a planetary expanse at the climax), may lack breathless thrills or tension, but it is consistently visually intriguing, juggling as it does two simultaneous dimensional realities that Valerian must navigate his way through. Which is particularly problematic when his hand is trapped in the more dangerous one. Indeed, Besson’s fluid sense of the “real” is one of the more engaging but undeveloped parts of the Valerian, playing with notions of holographic universes that run the gamut of dream states, actual events, and 3D-printed matter issuing forth from the coat of said snuffle creature.

There are other moments, such as Valerian crashing through a succession of alien zones in the station, that find Besson galvanised in terms of the mostly listless pace, and the countdown ending is reasonably effective. But in the main, it’s with whacky Besson that the golden nuggets are to be found. In The Fifth Element, he assembled leads who were sympathetic to such shenanigans, but here, there’s no such luck. Owen doesn’t seem remotely in tune with the picture in any way that would make him a remotely appealing or memorable antagonist (Gary Oldman may loathe The Fifth Element, but his loony turn is one of its highlights).

Dane DeHaan, a decent actor when cast well (some have cited his vocal similarities here to Keanu Reeves, the takeaway being that they are very different thesps who both clearly need sympathetic casting), be it in Chronicle or Life, is completely out of his depth when asked to play cocky, heroic, flippant, confident, playful and macho. There’s no point where you believe he’s one of the premier galactic agents around, and one can only reel at Besson’s choice.

If he picked DeHaan and Cara Delevingne to make everything else “pop”, well, that kind of worked, I guess, but why you’d be comfortable with a void at the centre of your movie is beyond me. Every time they fling romantic barbs/deflections at each other (I’m guessing a Han-Leia vibe is being aimed for), the picture assumes a state of abject lifelessness. They have no chemistry and inspire no desire to accompany them on their mission.

I’m loathe to compare this to the Wachowskis’ Jupiter Ascending, as Valerian at least maintains a sense of fun amid the stodge, but both go fundamentally wrong in picking performers who disappear into the material, never to be seen again.

Develingne fares better than DeHaan, such that when Valerian absents himself for a stretch and Laureline embarks to find him, you entirely don’t miss him (added to which, there’s never a point where you have the remotest idea what she sees in him, or even what kind of relationship they’re supposed to have – the marriage proposal looks like a joke, until it isn’t, and even then, you’re left waiting for the punchline).

Nevertheless, she still ends up impassive much of the time and lacks a discernible sense of humour – she ought to have one, with those eyebrows – so the scene where she sticks her head in a jellyfish’s bottom is never quite as amusing as it ought to be.

I’m a big fan of Europudding casting (see The Adventures of Gerard for a tip-top example), where stylistically mismatched performers of various nations are thrown at each other on screen, but you tend to need big performances to make that kind of thing work, and here Besson is too often in error (Ethan Hawke, really?), or wastes an opportunity (we see Rutger Hauer for about a minute, which is a crime). As a consequence, you remember smaller parts, such as Eric Lampaert’s guide Thaziit (camping it up like Russell Brand back on drugs) or Bob the Pirate (Alain Chabat), appearing popping a champagne cork, or the Howard the Duck-like (that’s the ’80s movie version) trio of Doghan-Dagui, like diminutive Ferengi only endearing.

There’s also a rather wonderful sequence, illustrative of Besson at his lunatic best, in which Laureline is captured by the Boulan Bathor and required to try on various dresses before being taken before their emperor to “serve” dinner. The emperor has been studiously showing his distaste for the endless procession of menu choices, but Laureline arrives wearing a ridiculous, monstrously-brimmed hat (so large, it reminded me of a sequence in The Adventures of Gerard in which the base of Jack Hawkin’s dinner table is one of his men with his head poking through a hole in the middle) with the top of her head displayed so as to be nicely snipped off. It’s the kind of twisted idea that brings out the best in Besson (the ensuing fight, in which Valerian dispatches numerous Boulan Bathor, including the emperor, is appropriately unrestrained).

I was an advocate of the juxtaposition of almost childlike sincerity and utmost goofiness in The Fifth Element, but it doesn’t really land in Valerian, even though there are strong echoes. In both movies, there is a proclamation from the female protagonist that love conquers all (which is when you find out, in this one, that apparently, the male protagonist goes strictly by the book, all evidence previously to the contrary). And in both, an alien singer is sacrificed on the journey to that realisation. Rhianna has an enjoyable, show-stopping cabaret number as shape-shifting Bubble, although the Bubble sequences are the most fun when she’s impersonating one of the Boulan Bathor.

Thematically, though, you’d have to be pretty dense to escape the message in The Fifth Element. In Valerian, there’s little in the way of takeaway. The Mül-ians are nature-lovin’ willowy types straight out of Avatar, only a touch less boss-eyed and a whole lot less blue, so naturally they’re due the restoration of their realm; the ever-variable Alexandre Desplat really lays on the treacly score in this regard, so as to let you know just how serenely heart-breaking their beatific existence is/was.

Design-wise, well the costumes are every bit as good as The Fifth Element’s if not quite as outrageous as you’d get from Jean-Paul Gautier, and the CGI creature work is varied, impressive, and often amusing, albeit you’re constantly wistful for the tangible prosthetics and animatronics of his earlier SF feast. A marriage of the two would have been preferable.

I doubt Valerian and the City of a Thousand Planets will be the undoing of Besson or EuropaCorp, and I’m sure the “auteur hack” (whatever that is), as a typically hacky Guardian piece labelled him, will be moving on to other pictures before long.  Another article in the same rag labelled him “the unsung hero of world cinema”, before dismissing his entire output as “part brilliant, part terrible” (cherry picking like that, you could level the same charge at Coppola, but no one would argue his ’70s work isn’t that of the bona-fide auteur). It’s a shame though, that this picture sags the way it does; a re-edit might solve some of the problems, but, alas, nothing can change the leads. 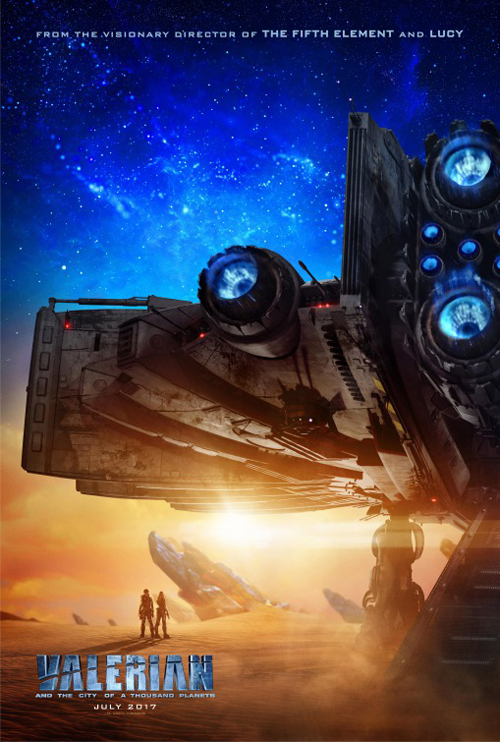