Well, I can certainly see why Focus Features opted to change the title from The Coldest City (the name of the graphic novel from which this is adapted). The Coldest City evokes a noirish, dour, subdued tone, a movie of slow-burn intrigue in the vein of John Le Carré. Atomic Blonde, to paraphrase its introductory text, is not that movie. As such, there’s something of a mismatch here, of the kind of Cold War tale it has its roots in, and the furious, pop-soaked action spectacle director David Leitch is intent on turning it into. In the main, his choices succeed, but the result isn’t quite the clean getaway of his earlier (co-directed) John Wick.

I haven’t read the graphic novel, but that shift in approach is essentially confirmed by its writer Antony Johnston (Kurt Johnstad is credited with the screenplay, previously of the 300 adaptation and its sequel), citing Leitch as asking “What if we do a noir and instead of making it feel stark and monochrome, what if we saturated it with colour?” Johnston goes on to note “whereas the books are very stark and sober, the movie is all action and very saturated with colour. But the plot, the story, the characters, and even whole lines of dialogue in the movie are taken directly from the book”.

The knock-on of this works both ways. It means the deficiencies of the original plot – most evident during the picture’s middle-section – are thrown into relief. It also means that, with a consistently heightened tone, you’re never nursing the illusion that this represents a remotely believable rendition of Cold War Berlin; it can only be taken as hyper-stylised and somewhat detached from its environment and thus premise. John Wick created its own world with its own rules. Attempt a same approach with an existing milieu, and the fit isn’t quite so snug.

But that said, if you’re willing to immerse yourself in this faux-Berlin (and, for all its excess, they bothered to film there, partly, and pay attention to period details), Leitch’s package is irresistible. At the forefront is a magnificent Charlize Theron performance, commanding every scene of action or dialogue. It’s extra-cute icing on the cake to know she and Keanu sparred together while he was training for John Wick Chapter 2.

Sure, the increasingly battered and beat-up protagonist is nothing new – it’s been par for the course since Bourne and then appropriated by Bond – but Leitch’s action direction is relentless and uncompromising, and putting a (weaker) woman up against (more powerful) men and having her use her wits and strategies to vanquish them on each occasion makes for a visceral, enthralling experience.

Said altercations involve everything from guns and fists to garrottes, from corkscrews to portable stoves (an extra-amusing one, given the connecting sound effect) and a nifty dust-up silhouetted against a screening of Stalker (just because). Leitch has offered us enough dazzling moments prior to the major set piece of the extended stairwell sequence, one which goes on and on and on even after Theron’s Lorrain Broughton has despatched her initial antagonists, to the point of each opponent’s exhaustion (earlier, a wounded party has toppled backwards down the stairs, unable to continue). There’s also a pretty great car chase, getting us momentarily away from the hand-to-hand.

Atomic Blonde doesn’t make a huge deal out of gender-swapping the traditional agent, which is to its benefit. You do occasionally wonder at Broughton’s perma-stylish attire and bleached hair being a beacon to anyone with a beef with her – there was really no need to tip the KGB off to her presence – but then again, 007 shows up everywhere in a devastatingly trim suit, doesn’t he? Theron’s given a “Am I a bitch now?” comeback to a sexist villain she bests, but it’s a line that pays off the preceding duel. Which is more than some of the dialogue here (as for complaints about her struggling to hit an English accent, I can only say I didn’t find it distracting).

James McAvoy, as the second lead/villain, has clearly dived wholeheartedly into the David Percival role, the rogue MI6 man “gone feral”, and he’s a powerhouse. It’s the kind of part to place alongside his turns in Split and Filth, where more can only be more and restraint is simply not an option. Not for a spy who has burrowed so deeply into a “comfortable” place and become so bewildered by the moral quagmire of his profession, he can only fall back on the rationalisation that it is all a game. That said, his parting “I fucking love Berlin!”, justifying his self-serving agenda, is a downright terrible line, and McAvoy couldn’t hope to make it work.

I’ve seen reviews complain about the framing device of the interview, but it worked fine for me, both as a punctuation of the Berlin scenes and in laying out the apparent agenda to stitch up Broughton. Toby Jones is formidably snippy as her snide persecutor (returning to the period from a genuine Le Carré adaptation in the Tinker Tailor Soldier Spy movie of a few years back). John Goodman has another decent role as the CIA contact and James Faulkner is effectively inscrutable as chief C (not M).

On the Berlin side, both sides, there are numerous notable players, amid the welter of KGB, French intelligence, Stasi, CIA and MI6, including Eddie Marsan in typically luckless form as Stasi defector Spyglass (Marsan has a profound ability to elicit sympathy for whatever terrible lot befalls him), Sofia Boutella as love interest Delphine (canny against-type casting, as after Kingsman and The Mummy you expect her to be a bad girl) and Bill Skarsgård (soon to be seen clowning around in It) as Broughton’s one trusted contact.

It’s curious that the picture ends up with such a convoluted resolution, as for much of the time it makes an effort to be unfussily straightforward in its trajectory. There isn’t much in the way of intrigue, other than an is-he-isn’t he in respect of Percival that is more when-will-he-be-revealed-for-definite than doubt. Leitch seems content to continually return to Broughton hanging around in clubs or bars waiting for her next set piece, or occasionally opting for a spot of Sapphic distraction, while never far from her next drink, or smoke, or drink and smoke.

As such, the reveal that she is Satchel, and even more a triple agent to boot (or is she even a quadruple agent? Who knows where she’ll be reporting next after that meeting with Goodman’s Kurzfeld) doesn’t have the kind of jaw-dropping effect it probably ought. We haven’t been primed sufficiently for something surprising up the picture’s sleeve, so we’re not all that impressed to find something is. It might have been better, dare I say it, to have simply had Percival as Satchel and left it at that, since I’m unsure how much is actually gained from her murkiness (perhaps a second viewing will illuminate me and I’ll retract entirely).

And, while I got the gist of Lorraine’s dealings well enough, I have to admit, I wasn’t altogether quite clear what it was Percival told Bremovych (Roland Møller) that made him decide to dispose of her, since it can’t have been that she is Satchel as he knows that anyway (unless he also knows that Satchel is a triple agent, working for the CIA and so feeding them crap intel – quite a rigorous dump of data on this list, if so). Perhaps more pertinently, what purpose would it serve Broughton to save Spyglass, if Spyglass’ memorised list can identify her as Satchel?

The other slight point of contention with Atomic Blonde is the soundtrack. Tyler Bates’ general cues are appropriately atmospheric, but as much as the period sounds are invigorating to the action, they are also cumulatively a little too liberal in their foregrounding, at the expense of immersion in the movie itself. The result, on occasion, is the sense that Leitch is in danger of waving through a succession of vignette promos rather than parts amounting to a whole (I like the creative, graffiti-esque onscreen captions, though, utilising a similar flair to the subtitles seen in John Wick).

Generally, though, I was more than satisfied with the two-edged titled Atomic Blonde. It evidences that both Wickers, Leitch and Chad Stahelski, are very much equally inspired visualists now they have gone on to complete solo vehicles. It cements Charlize as an action icon up there with the best (and as for other female contenders, I liked Salt, and several other of Jolie’s forays into that territory, but Theron easily surpasses her). I’m not sure Atomic Blonde will make enough to guarantee a sequel, but it wasn’t expensive, and John Wick garnered one. It might be interesting to see what Broughton gets up to in the ’90s. In the meantime, Leitch has gone on to Deadpool 2. I can only hope he mustered a sizeable pay cheque, as that may be the only reward he gets from the experience. 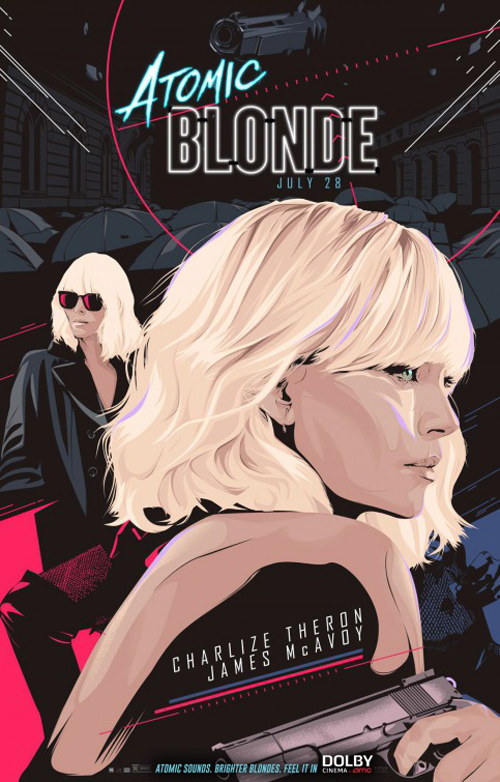