Don’t get tipsy. We can’t have you hiccoughing in the coffin.

The Avengers
4.2: The Murder Market

Tony Williamson’s first teleplay for the series picks up where Brian Clemens left off and then some, with murderous goings-on around marriage-making outfit Togetherness Inc (“Where there is always a happy ending”). Peter Graham Scott, in his first of four directing credits, sets out a winning stall where cartoonishness and stylisation are the order of the day. As is the essential absurdity of the English gentleman, with Steed’s impeccable credentials called on to illustrious effect not seen since The Charmers.

Emma informs Steed that the chances of coincidence in the likely suspects of eleven apparently organised murders being conveniently elsewhere at the time are 27 million to one, so C-3P0’s got nothing on her. Led to Togetherness Inc via a dodgy photographer, who has the jump on Blow-Up by a good two years (“Give it a bit of life, baby. Animate!”), there’s a slight whiff of déjà vu of Harold Innocent’s artist in The Medicine Man; in both cases, they’re in on the scheme, while the premise of providing an alibi to the most likely suspect was previously covered in Mandrake. Although, here, it is very much of a Strangers on a Train type.

Steed: The marriage bureau’s involved in this. It’s involved right up to its bridal bouquet.

The sets and style are even more accentuated than before, with the series suddenly a fully-formed part of the swinging ’60s; when Steed sets off a model with his bowler and brolly, to the photographer’s delight, it’s pretty much a summation of the modern-retro vibe that was happening all over popular culture. Then there’s the very excessive interior of Togetherness Inc (“What a charming atmosphere!”), an excellent title shot of a shot fish tank, and the elaborate use of coffins and lying in state (always a go-to for the show).

Mrs Peel: Steed, who are you supposed to kill?
Steed: You, my dear.

Williamson does fall victim to a not-uncommon failing of our superspies, though, which is spreading themselves too thinly. The number of times someone they idly meet is linked to the villains, you’d have thought they’d get menials to do some of the basic footwork, since both Steed and Emma are rumbled on this occasion through not being in character with the villains. Emma spies the Canuck (Suzanne Lloyd as Barbara Wakefield) fleeing from JG Henshaw’s (Robert Milner) house, who later identifies her, after Steed has sent her to the bureau (resulting in his getting commissioned to top Emma, another trope the series uses not infrequently), while our photographer friend was one of the first people he interviewed, so its sheer luck that Steed didn’t get rumbled earlier.

The only major surprise is that John Woodvine turns out to not to be a bad guy (he’s in American Werewolf, rather than Armageddon Factor, mode), mainly thanks to his sinister red herring manner on first encounter. But, if the actual managing director is a twist, it isn’t matched by a grand performance.

Mrs Peel: What’s marriage got to do with it?
Steed: A marvellous institution, my dear. I’m seriously contemplating it. I offered myself on the market today. Every bid considered. Of course, I’m very choosy.

Patrick Cargill is marvellously oily as Mr Lovejoy (he’s the Number Two Six gives a nervous breakdown in Hammer into Anvil), ushering in a wave of unfettered snobbery as he announces that their clients come “from all the best families” and “We do not accept the lower orders, you understand”. Steed is, of course, perfect placed for such prescriptiveness, passing the emotional and physical compatibility test (“We take the uncertainty out of life. Compatibility is the key, Mr Steed”) with flying colours (asked by Lovejoy “Guards? Which guards?” Steed replies “The guards”, while his reaction to the prospect of a taking job is positively Woosterish (“I tried working once. It didn’t work out. Too much like work”) and his objection to murder is purely on the grounds of the hardships of prison (“I’ve always preferred soft collars. Besides, the thought of getting up at 8 o’clock in the morning”).

Steed: So long as she’s got a good seat on a horse, plays a fair game of bridge, mixes a dry martini, can whip up a passable soufflé. You might say a good all-rounder.

There’s quite the ripple of ribaldry running through the proceedings too, with Steed eyeing up the talent, offering his selection of personal photos (“Playing polo. In the nude… Oh no, I was eighteen months at the time”) and commenting on his first date during a wedding cake tasting (“I must say, I found her very tasty. I mean, er, compatible”).

Although, that’s nothing as to Emma’s stated appetites, reducing Lovejoy to unaccustomed embarrassment when she emphasises the importance of endurance in her husband to be. The characterisation of Emma is a bit up and down in this one, truth be told, reflecting its status as Rigg’s first completed episode. We get a mention of her husband (“Time you thought of marrying again”) and an amusing sequence of her lying in state (“You were certainly resting very peacefully”) before succumbing to the champagne Steed has left her (“Anything I can get you? Magazines, newspapers, a harp?”) and dancing around the reception room. Not something you could imagine of Mrs Gale. And yet…

Mrs Peel: She’ll have to be quite a girl. A mixture of Lucretia Borgia and Joan of Arc.
Steed: Sounds like every girl I ever knew.

When Emma comes across the body of Henshaw in a bath, she furiously rounds on Steed (“You knew!”), and we’re suddenly experiencing incensed Cathy Gale flashbacks. All very unfair too, since Steed has indeed done his best to save the man. Likewise, when he suggests that qualities necessary in finding a match for someone like himself (“Educated, charming cultured”) she counters him in a very Mrs Gale manner (“Ruthless, devious, scheming”) showing that, for all Rigg’s very different playing, there was still some way to go in characterisation.

That has to be balanced against comic business we just wouldn’t have seen a season earlier, however, from Emma getting a golf ball lodged in her tuba (it was Macnee’s suggestion she play it, as it was originally earmarked for Steed) to a lovely little piece of interplay between Cargill and Macnee, sitting in the wrong directions in opposite facing chairs, and a climactic fight that sees Steed overpowering an opponent by means of a faceful of cake. Blink and you’ll miss Penelope Keith as a blushing bride (she’d appear in the show twice more).

And, of course, the coda in which Emma is again driving Steed, this time in a hearse (“I agree with every word you’ve said” oblivious to his holding forth behind the glass divider). This still isn’t quite up to the best of Season Four, but it’s definitely heading in the right direction. 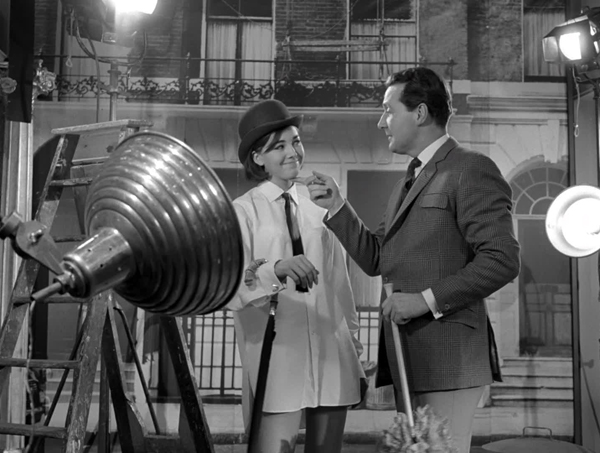 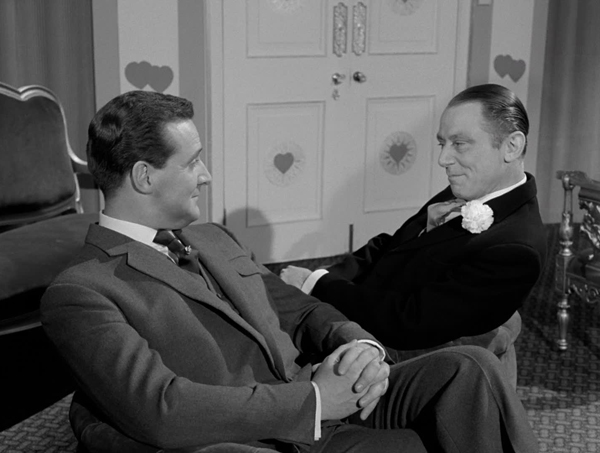 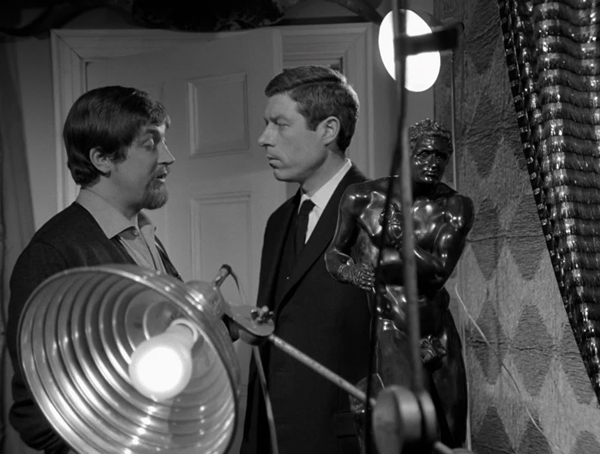 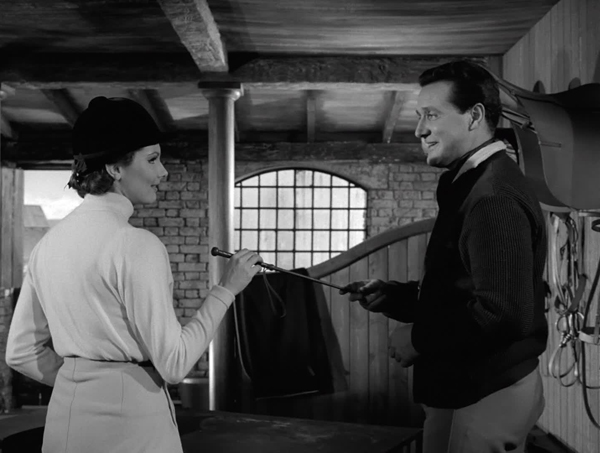 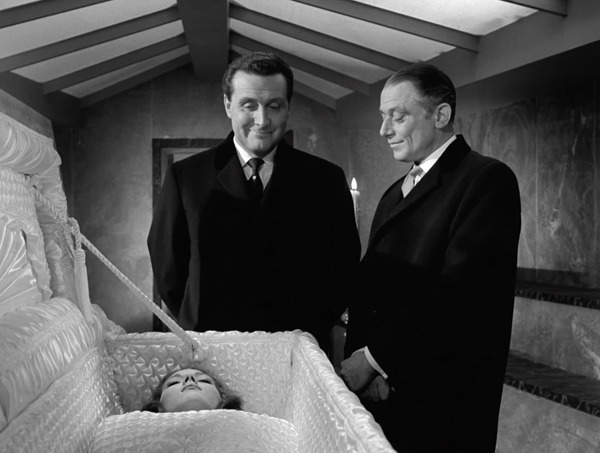