Death to Bill and Ted!

The game of how few sequels are actually better than the original is so well worn, it was old when Scream 2 made a major meta thing out of it (and it wasn’t). Bill & Ted Go to Hell, as Bill & Ted’s Bogus Journey was originally called, is one such. Not that Excellent Adventure is anything to be sneezed at, but this one’s more confident, even more playful, more assured and more smartly stupid. And, in Peter Hewitt, it has a director with a much more overt and fittingly cartoonish style than the amiably pedestrian Stephen Herrick.

Evil Bill: First, we totally kill Bill and Ted.
Evil Ted: Then we take over their lives.

My recollection of the picture’s general consensus was that it surpassed the sleeper hit original, but Rotten Tomatoes’ review aggregator suggests a less universal response. And, while it didn’t rock any oceans at the box office, Bogus Journey and Point Break did quite nicely for Keanu Reeves in the summer of ’91 (inflation-adjusted, it was the size of John Wick: Chapter Two, which emphasises how much parities have changed – the dollar then was worth twice what it is now). They still might be the best back-to-back pairings the actor has had, both trading to some extent on his (then) airhead rep, but effectively showcasing him in entirely different genres.

Of course, this is very much a case of inseparable equals, even if Alex Winter has mostly concentrated on directing since. And of another pair of inseparable equals in writers Ed Solomon and Chris Matheson, the former having been considerably more prolific since, although not necessarily laudably so (the Now You See Mes are hopefully to his chagrin). They mostly ensure Bogus Journey is as inspired and irreverent as the original. Indeed, its only problem is that the first two acts are such a delirium of energy and creativity that, once our doofus heroes return to the real world, the proceedings have to content themselves with merely chugging along to a satisfying rather than sublime conclusion.

Much of the fun here comes from watching Reeves and Winter playing evil versions of their alter egos. It has to be said that this isn’t Joss Ackland’s final hour, but Chuck De Nomolos’ – “My old teacher”: “Rufus, my favourite pupil” almost mocks the convention, but then can’t be bothered – doppelganger creations find Solomon and Matheson taking on a gleeful deconstruction of the main characters and in so doing making them every bit as appealing as their goodly originals.

The best of this is that they identify themselves as “Evil Bill” and “Evil Ted”. Trying to run over cats, impersonating the babes with the most juvenile make-believe that the real Bill and Ted inevitably swallow (“We think you’re losers, and we never want to see you again. We’re going to the desert to be alone”), and killing them in the exact location Captain Kirk fought the Gorn in Arena is the icing on cake. They even talk back to their creator (“I hate them. I hate the robot versions of them”: “You made us, Dude”). It’s a shame Matheson and Solomon couldn’t keep the Evil Bill and Ted subplot going while their good versions were in Hell, as you can’t help feel there was more ripe material to plunder. The evil robot doubles also deserve credit for knowing when they’re outmatched (“Kudos to you, good human us-es”).

Ms Wardroe: The girls, they can play, but you guys.
Bill: Girls mature faster than guys.
Ted: Plus, they started in the fifteenth century.

Bill and Ted’s winning line in stupid-clever is in full effect as they’re given a mountain to climb; their dreams are no closer to fulfilment, with the babes far more musically proficient and Ted still under threat of military school (asked by his dad what he will do if they lose the battle of the bands, he replies “I guess, maybe sell some more blood”). Added to which, Missy – the appropriation of the name is further evidence that the Moff has stolen wholesale from Bill and Ted with his version of Doctor Who, only, like Pam Ayres’ mother’s flit gun, devoid of charm – has divorced Bill’s dad and married Ted’s (“Maybe she’ll marry you”: “Yeah, then I’ll be my own stepdad”).

Ted: I hope this works.
Bill: It worked in The Exorcist – I and III!

Matheson and Solomon carry off some marvellously silly conceits, such as Melvin-ing death putting him sufficiently off his stride that Bill and Ted can escape and attempt to warn their families. And I love that they throw in the I and III line to possession working in The Exorcists (beautifully nerdy). Hal Landon Jr is hilarious as Ted (“I totally possessed my dad!”; “Catch you later, cop dudes!”) More might have been made of the séance sequence (“How’s it going, New Age dudes?”), other than seeing down Missy’s top (“That’s your mum, dude!”). But it reconfirms this is a very Christianity-cued take on death and the afterlife, which at least makes things simpler.

The scene stealer of Bogus Journey is William Sadler, of course, most recently showing off his (non-Martian) butt as a not-so-great villain in Die Hard 2: Die Harder (making you wonder if Death’s later rear reference was an intentional nod). Death is truculent and an extremely bad sport, shifting the rules when he loses (“Best of seven?”: “Damn right”), but what sets him off so perfectly is Sadler’s strangled Eastern European enmity (“You have sunk my battleship” is funny wholly for the delivery).

Death: I will… take you back.
Bill: You played very well, Death. Especially with your totally heavy death robes.
Death: Don’t patronise me.

Hewitt is taking his Death iconography from Ingmar Bergman, of course, and its thus entirely appropriate that he should plunder Powell and Pressburger for Heaven. Hell is as much Greek legend-inspired, with an eternity of repetition of a dread experience, but also takes in Warner Bros cartoons (“Dude, this is a totally deep hole” as they continue falling down it), heavy metal (“We got totally lied to by our album covers”), and misconstruing Satan’s apparent altruism (“You know, you got a bad rap, but you’re actually an okay dude”).

The selection of personal hells might have merited a bit more thought behind them, ranging as they do from the brutal (“Get down, and give me infinity!”), to suitably gross (“How about… a kiss for your dear old granny” – fantastic that Bill’s gran is Granny S Preston, Esq), to rather lame (the Easter bunny).

Ted: Dude, we’re in heaven, and we just mugged three people.
Bill: I know. We better get out of here before we ruin it for everyone.

That Bill and Ted should quote Poison lyrics to gain an audience with God seems entirely appropriate (“Every rose has its thorn…”), and it’s only with the introduction of Station(s) that the picture loses steam a little. Aside from being an extended butt gag –

Ted: You are a most excellent scientist, Station.
Bill: Yes, plus you have a most excellently huge Martian butt.
Death: Don’t overlook my butt. I work out all the time. And reaping burns a lot of calories.

– they’re passive, neither funny nor interesting, and Bogus Journey is unable to maintain its hellish momentum once back on Earth. But the battle has been won by that point. One might pick bones with the return of the piss-take time-travel logic motif (loved by aforementioned Stephen Moffat, who could only hope to do it as well, or even in material where it was appropriate), but it isn’t overused and, rather, it’s a neat and efficient way of finishing things off (“Only the winners are going to be able to go back and set something up!”)

Death: You might be a high flier or a little street sweeper,
But sooner or later you dance with the Reaper.

I’ve mentioned a few of the picture’s pop-culture references, and it’s gratifying that they’re often the most offbeat ones, such as the solution to a game of charades being Smokey and the Bandit III: Smokey is the Bandit or the end credits “Grim Reaper in lip synch scandal” invoking the ghosts of Milli Vanilli).

Bill: Ted?
Ted: What?
Bill: Don’t fear the Reaper.
Death: I heard that.

Other stupid movies have been more successful (Dumb and Dumber) or more barefaced-derivative (Dude, where’s my Car, which, don’t get me wrong, is pretty great) but none have been quite as perfect in maintaining a tone of clever stupidity as this trilogy.

Because, yes, I’m keeping my fingers crossed. Someone must want to fund the final part. If Gilliam can get The Man Who Killed Don Quixote off the ground after almost two decades, if Pee Wee Herman can get another movie, surely Bill and Ted can go wherever it is they’re due to go next? Of course, I was anticipating Part III when I last watched Excellent Adventure three years ago, but Reeves did at least confirm the follow up to Bill & Ted’s Bogus Journey remained on the cards when he guested on The Graham Norton Show earlier this year. It would be most non-non-non-non-non-heinous if they finally got it greenlit. And if all else fails, I’m sure Netflix would lap it up. 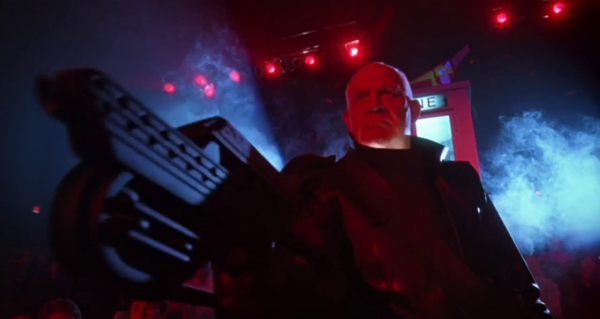 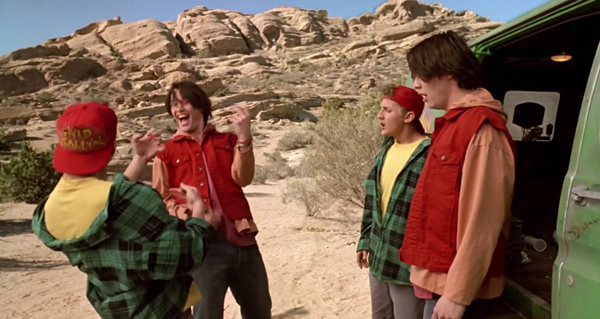 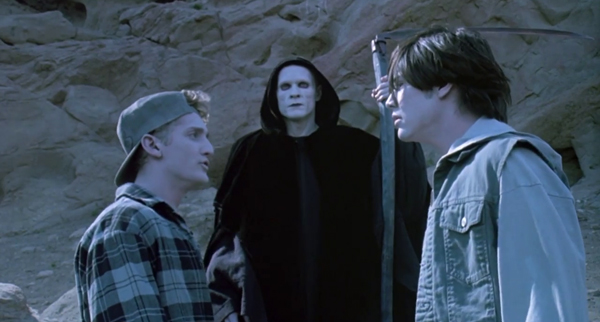 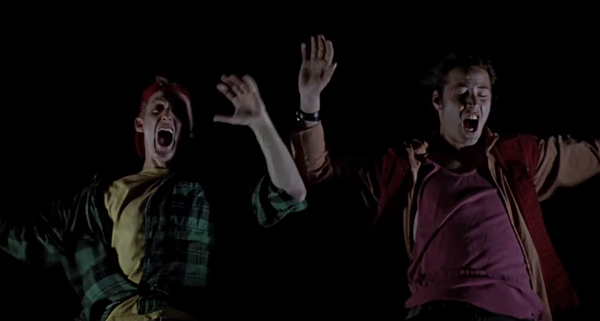 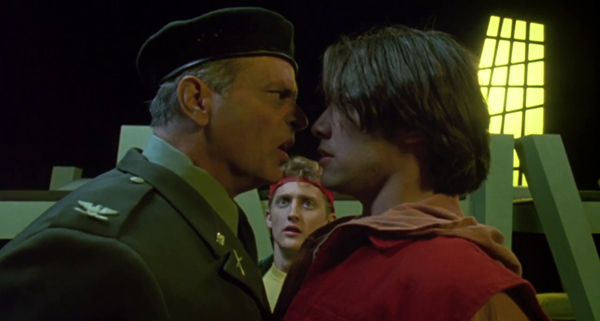 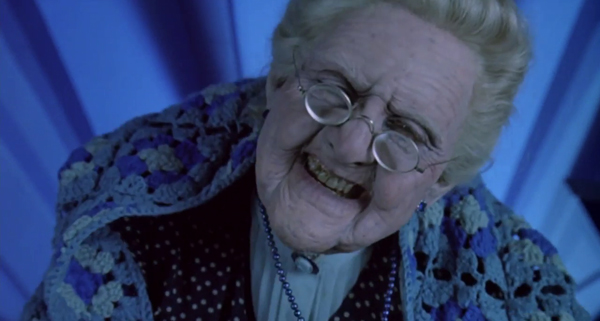 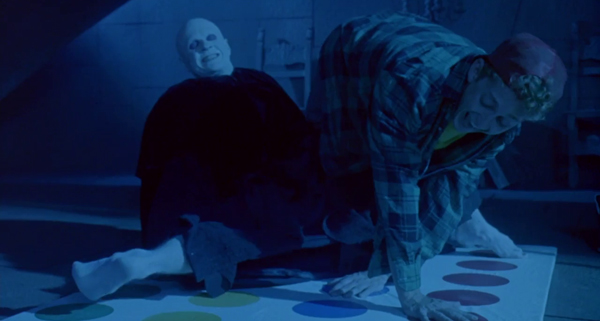 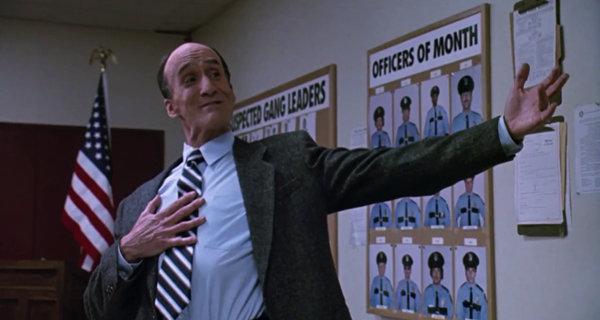 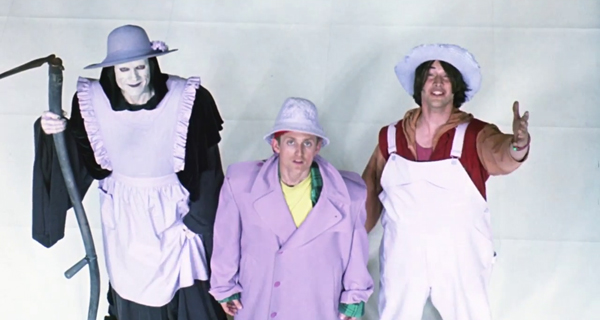 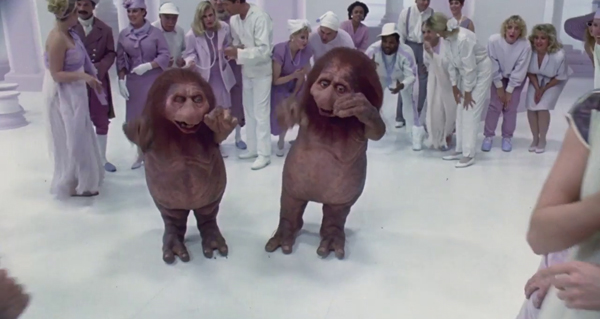 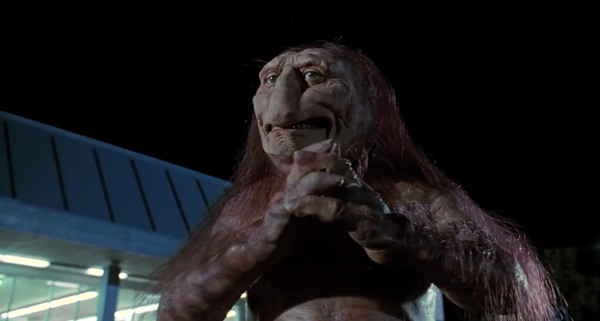 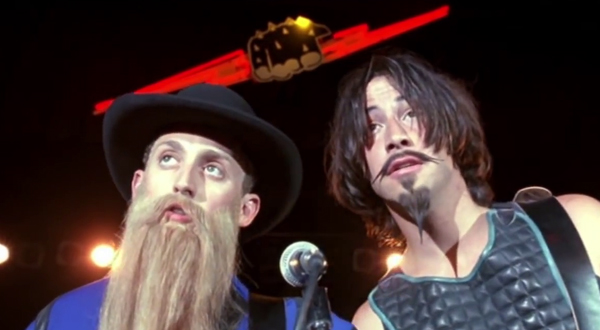 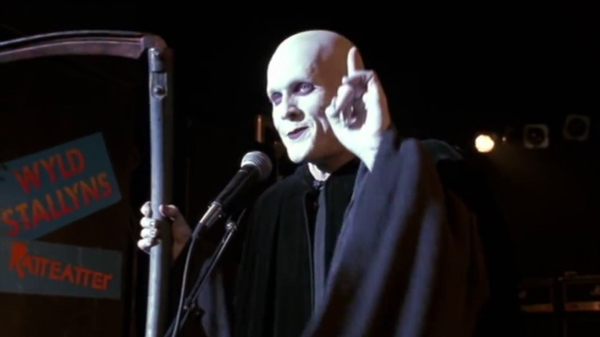 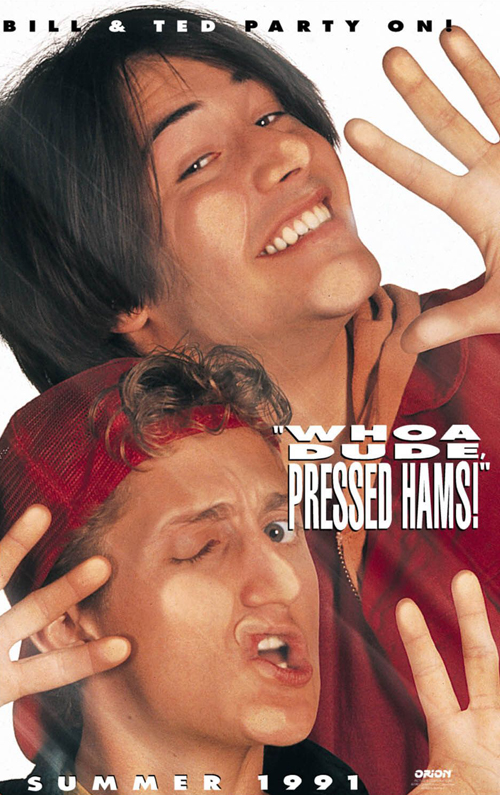