A wrong has been made right, and the Sun is shining bright.

After the relative wheel-spinning of the previous episode, What is the story, Charlie? makes up for it and then some, with hugely satisfying Evil Coop and Dougie Coop plotlines and several really nice little moments back in Peaks itself. Damn it, they’re making me care about characters I always found tiresome in the original!

I’m betting Tom Sizemore loves playing Anthony Sinclair. It’s so entirely against his type – “a weak fucking coward” as John Savage’s bent cop puts it –  and there’s an added enjoyment factor to seeing Sinclair break down and confess upon having Dougie-Coop massage his dandruff-coated shoulders.

Dougie-Coop’s idiot savant ability to unknowingly bring about exactly the most positive solution is verging on the Clouseau-like (“I tried to poison Dougie, he saw right through me”), such that now even the crooked cops are implicated (while the incompetent ones, the Fusco brothers, manage to discard the evidence of who Coop is, in a mischievous Lynch dismissal of what he surely knows is the audience’s paramount desire to get our Coop back). And there are two helpings of cherry pie: Dougie’s and, prospectively, Becky’s.

I have to admit, I’m not so sure about Janey-E, since almost everything we see about her affection for Dougie-Coop suggests the shallowest of characters. She has an entirely oblivious husband with great abs who gives her wild orgasms and elicits confessions of “Oh Dougie, I love you so much” when she sets eyes on the amazing new sports car that’s been delivered courtesy of the Mitchum brothers. Who knows, maybe Lynch is making a wry commentary on the ideal husband, but Janey-E comes across as entirely materialistic (entirely likably so, though, thanks to Watts’ performance). But more to the point, which is better: Sunny Jim’s insanely-lit-up-like-the-Vegas-Strip gym set or Ray’s gang’s insanely-oversized monitor screen?

Bushnell Mullins: Dougie, you might want to call your wife?
Dougie-Coop: Wife?

So just when did that ball-tossing scene in the back garden take place last episode? Not between the Mitchums taking Dougie out to celebrate and his arriving at the office the next day – Robert Knepper doing the conga is priceless, whereas Belushi looks like he does it all time – that’s for sure (Lynch likely just doesn’t care with some of this stuff, like the auto incident of the previous episode involving Bobby not occurring on the same day as his finding his dad’s message, and later relating that to Ed in the diner in this one).

The hands-down sequence of the episode is Evil Coop’s visit to Ranzo (Derek Mears) and his gang, with the aim of settling a score with Ray. It pulls one of my favourite devices of putting you suddenly on the side of the bad guy, as Coop, outnumbered and roundly mocked over his chances of winning at arm-wrestling, and whacked on the back of the head (it was probably this act that sealed the boss’s fate), proceeds to entirely take the piss out of Ranzo’s macho bullshit.

Evil Coop’s succinct delivery here has a touch of the Dougie about it, and both have a stillness that contrasts effectively with those they come into contact with. I half expected Coop to pull a Jeff Goldblum in The Fly and bloodily snap Ranzo’s arm, but instead he merely breaks it and puts his nose through his skull.

Ray: He said that you’ve got something inside that they want.

It’s interesting how much this series is revolving around characters who can no longer make a live appearance. Bob, Major Briggs, and now Phillip Jeffries. I’m wondering if they’ll end up recasting Bowie, but give an unreal explanation for it. So Jeffries’ idea was to put the ring on Evil Coop and have him transported back to the Black Lodge… And isn’t it going to be a major let-down for Evil Coop when he learns the coordinates lead him back to Twin Peaks, somewhere he’s studiously avoided for a quarter of a century?

Other things to note of this scene: we get to connect the dots between Richard Horne and the bad crowd he’s in with (there seems to be online expectation of Richard being revealed as Evil Coop’s son, which I guess is possible, but even crueller of Lynch towards Audrey if so); the man in the corner (“Do you need any money?”); Jeffries is at the Dutchman’s (presumably flying, so in some place of limbo, outside of time?)

Aw. I never much cared for Big Ed in the original Peaks, dismissing him in much the same way Albert did, but seeing the poor sap still forlorn, never catching a break, bereft without the love of his life, ending the episode nursing a cup-a-soup at Big Ed’s Gas Farm (the site of the convenience store with the smelly demon tramps?) is terribly sad.

The uber-soapy plot of Norma’s Double-R franchise is also a sign that Lynch and Frost are very much prepared to take the show on to another season should there be a greenlight – there are only five episodes left! – and it seems Showtime will be happy to wave them through if they’re willing. Walter (Grant Goodeve) is surely a new contender for most hissable tool, trying to undermine Norma’s natural, organic, made with love, service with a smile. How dare he, and then have the audacity of asking her to dinner!

Nadine: Can I call you Dr Amp?

And is this romance between Dr Jacoby and Nadine? Or what approximates the stirrings of it, as he recalls seeing her seven years previously, looking for a potato on the floor of the supermarket. There was a big storm that day, apparently. Anyway, this one may not go anywhere, much like Dr Amp’s circular broadcasts (“Thanks to you, I’m starting to shovel myself out of the shit”)…

… and the TV show Sarah Palmer is watching on a seriously deranged alcoholic loop (“And now it’s a boxing match again”). Is this a very obvious comment on the perma-inebriated state, or is there something else going on, complete with signature Lynch electrical sound effects? Probably both. I kept expecting some really weird shit to transpire, the scene dripping with pregnant menace, but instead, with get teased some more.

I wouldn’t say Audrey isn’t still acting the bitch this week, exactly, but she’s clearly got some screws missing which makes her a touch less unsympathetic. On the other hand, I found Clark Middleton hilariously deadpan as Charlie, and I’d like to see him interacting with more of the show’s iconic characters. Get him out and about. Audrey still wants the lowdown of his phone conversation with Tina, and she’s all conflicted about going to the Roadhouse. Most indecipherable is the end of their conversation, and the title of the episode:

Charlie: Wow, are you going to stop playing games, or do I have to end your story too?
Audrey: What story is that Charlie? Is it the story of the little girl, who lived down the lane? Is it?

Well, is it? Ed had me feeling for him, and so did old James Silk Hurley, hitting those impossibly high Smurf notes with an encore of Just You that Renee (Jessica Szohr) seems to think is just for her. At least, she’s responding that way. An episode so satisfying, Lynch even pulls off a solid toilet gag when Anthony disposes of his poisoned coffee (“That bad, huh?”). 3.13 gets five stars. It’s that good. 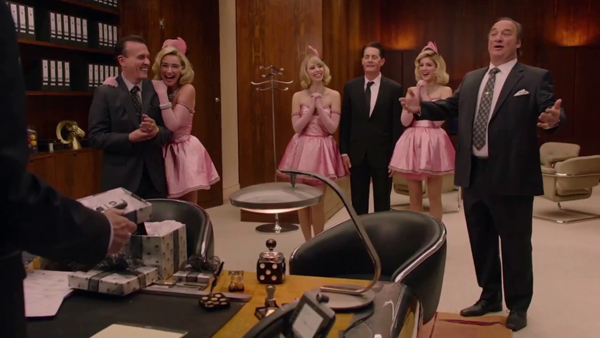 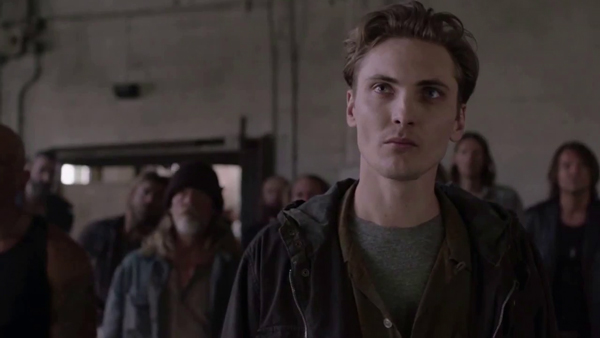 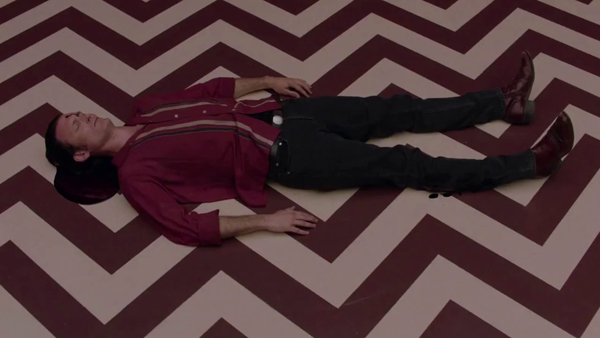 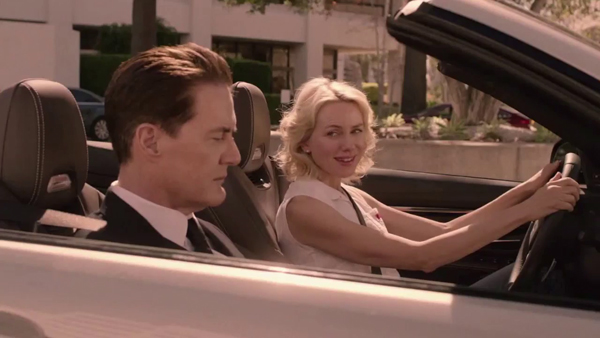 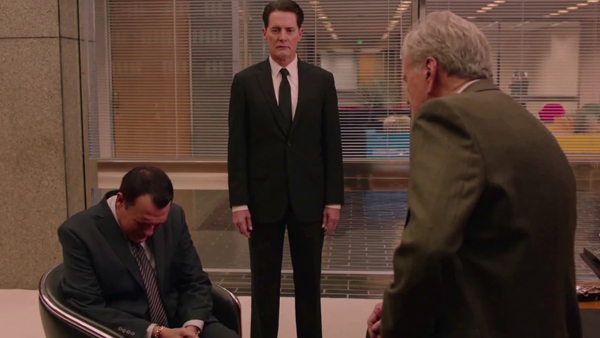 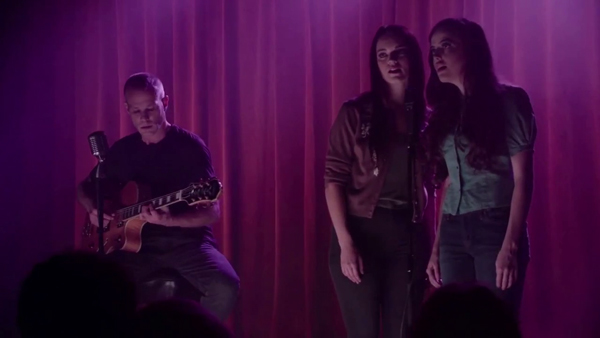 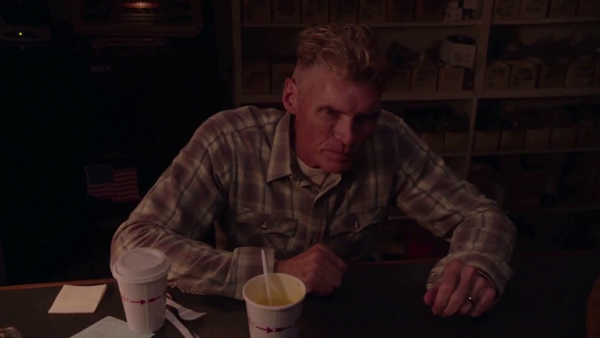