Will Smith’s most recent attempt to take a wrecking ball to his superstardom, Collateral Beauty is one of those high-concept emotional journeys that only look like a bad idea all along when they flop (see Regarding Henry). Except that, with a plot as gnarly as this, it’s difficult to see quite how it would ever not have rubbed audiences up the wrong way. A different director might have helped, someone less thuddingly literal than David Frankel. When this kind of misguided picture gets the resounding drubbing it has, I tend to seek out positives. Sometimes, that can be quite easy – A Winter’s Tale, for example, for all its writ-large flaws – but it’s a fool’s errand with Collateral Beauty.

The last time Smith ventured into such bare-faced, turgidly manipulative and indulgent territory was Seven Pounds, a truly dreadful movie, possibly the nadir of his career (like Bruce Willis before him, he seems content to leave fallow his greatest natural skill as a performer: making people laugh). He fared better with the flagrantly aspirant The Pursuit of Happyness. This falls somewhere in between.

While Collateral Beauty isn’t dead set on charting a course of personal grief-porn to its tragic end, it is nauseatingly keen to spoon out the life-affirming platitudes. Somehow, the movie attracted an all-star cast, which adds to my ponderance that Frankel’s tin eye deserves to cop some of the flack, albeit screenwriter Allan Loeb has a track record for the shiny, exec-luring premise, as well as soggy emotional uplift.

Loeb isn’t making matters easy in the sympathy stakes off the bat, asking us to invest in the survival of that most unworthy of industries, advertising. He might as well have Smith’s Howard Inlet (Inlet?) presiding over a collapsing bank and expect us not to cheer on its demise. We’re told, in all seriousness (as far as I could divine) “Advertising is about illuminating how our products and services will improve people’s lives”. And there I was, thinking it was about brainwashing people into buying things they don’t need or even want in the name of the god that is materialism.

Alas, poor Howard suffers a terrible tragedy soon after, losing his daughter. You can tell this has a terrible effect on him as he turns all grey and stubbly, and takes to setting up ridiculously expansive domino arrangements that he then topples, to the accompaniment of a heartstring-pulling soundtrack. Howard has also hit upon the notion of sending symbolic letters to Love, Time and Death, berating them for putting him through the same grindler they put most people on the planet through at some point. This is, after all, a Hollywood movie, where people do and feel things in an alternate reality, so sending letters to abstract forces is the kind of thing that gets applauded as a red-hot idea and even encourages bidding wars. Did I mention it’s set at Christmas? How could it fail?

Probing tomes on Howard’s writing desk such as The Hidden Reality and Journey of the Souls suggest a philosophical underpinning to Collateral Beauty that simply doesn’t exist. One assumes Loeb either read the blurbs and decided “Nah” or Frankel’s prop department were far more enlightened than those calling the shots. There’s a point where I thought the picture might be promoting the idea of equivocal perceptions of reality – when Whit (Edward Norton, in an entirely thankless part) notes that his relationship with his mentally-ailing mother improved when he stopped trying to “force your reality onto her, and just go into her reality”, that no one person’s is any more valid than another’s – but it isn’t doing that either.

Rather, Loeb is serving up gloopy portions of schmaltz with zero attentiveness to shame and decency. Before Whit comes up with the deranged scheme of hiring actors to play Death (Helen Mirren), Love (Keira Knightley) and Time (Jacob Latimore) – in order to have Howard pronounced mentally unfit when they are digitally erased from recorded footage, leaving him talking to air (likely as not to push him completely over the edge, resulting in him going mad or killing himself, should he buy into it at all) – he comments that they tried everything: grief counsellors, ayahuasca and interventions. The middle one’s supposed to be a gag, but Frankel, who previously savaged eyeballs with Marley & Me, fumbles pretty much every would-be witty line, just as he torpedoes the emotional ones.

Lest you think this is all about Will, he actually has no more screen time (admittedly, I didn’t do any precise calculations) than his co-workers, Whit, Claire (Kate Winslet) and Simon (Michael Pena), who have maudlin trials of their own to face. Actually, that’s unfair. Whit and Claire have really ropey trials – he, as a philanderer whose daughter has rejected him, must reconnect; she is facing having missed out on motherhood.

But Simon’s is rather affecting, so much so that it ought to have merited Howard receiving a good slap for being so self-indulgent while one of his friends is dying from cancer. When Brigitte/Death tells Simon, who has kept the prognosis from his family, “You are not dying right. You’re not helping them”, it’s one of the few lines in the screenplay that land, although the credit is largely due to Mirren and Pena. Other lines, like the gibberish “There is no such thing as collateral beauty” fail to amount to anything even when they’re laboriously explained.

The reveal (although it’s heavily signposted from their first scene) that the actors actually are these universal forces is presumably supposed to make the deception of Howard all right (and anyway, pains have been made to make it clear that, even though what they’re doing is entirely motivated by money, Whit, Claire and Simon really do care about their boss/partner). Being charitable, I might allow that something could be done with an idea like this – minus the nefarious colleagues. Perhaps, given a poetic makeover by a Wim Wenders, rather than engineered by someone whose fall-back for any given emotional outpouring is a music montage.

I doubt the misconceived twist that Howard’s grief support group counsellor (Naomie Harris) is, in fact, his wife could have worked with anyone, though, since it requires a switch of levers; it’s an intellectual device, a “clever” plot thing, rather than providing a cathartic moment. Still, it appears to do the trick, as far as waking Will up is concerned, and he isn’t even consequently pissed off at his unscrupulous fellow workers.

You wonder, with a movie like this, if it might be some sort of test designed to register the limits of what audiences find morally/ethically acceptable. That, in an “ends justify the means” sense, all manner of objectionable behaviour gets the tacit nod of approval. If so, it’s just as well it flopped. As such, that my rating isn’t lower reflects that I found Collateral Beauty morbidly diverting, fascinating for the depths to which it is willing to stoop. 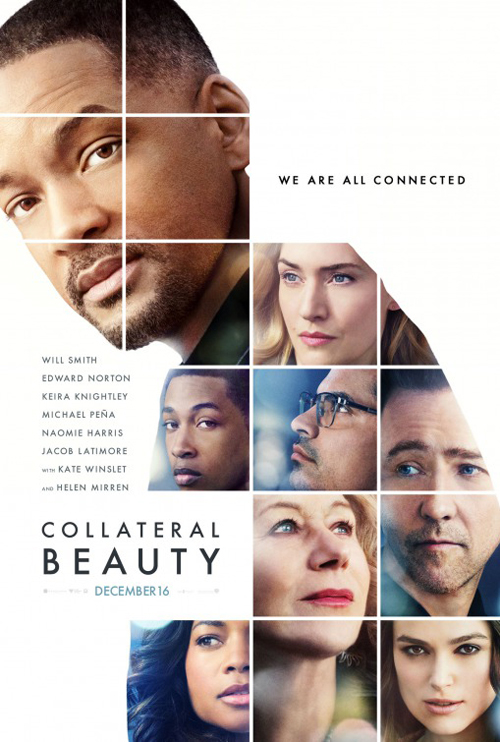