I have never trusted Klingons and I never will.

The OST movie consigned the status of just being incredibly solid by default, rather than through any particular flaws in its construction. If The Wrath of Khan takes the crown through being masterful on every level, and The Voyage Home, against the odds, calls back to the series’ comedy episodes but in a way that’s better than pretty much any of them, Star Trek VI: The Undiscovered Country’s bronze medal is nothing to be sneezed at. It’s just that it doesn’t quite have the same distinguishing spark.

Of course, all three share Nicholas Meyer on script and/or directing duties, with the latter two also find Leonard Nimoy offering sage storyline kernels reflecting present-day concerns transposed to a future arena. The evergreen destruction of the environment inspired The Voyage Home, while here, the twin events of Chernobyl and Glasnost inform the story’s underpinnings, all ready for the fully rehabilitated Klingons in the then-simultaneous The Next Generation.

It’s – that word again – a solid idea. But where the environmental theme only occasionally yielded to speechifying in The Voyage Home, in The Undiscovered Country it is the thing, with the consequence that some of the dialogue and developments are perhaps a little too on the nose. And yet, Star Trek VI still pretty much gets away with it, because it has on its side the weight of its own internal history, which can readily absorb and filter heavy-handed allusions to actual events.

The Final Frontier gets a lot of stick, some of it deserved, but its main point of distinction in relation to its surrounding sequels is that it is unmoored, with little relevant inter-continuity other than the general friendship of the crew (notably, David Warner shows up in both Star Trek V and Star Trek VI as different characters, perhaps a sign of how much everyone was inclined to disregard it; that, or they just thought Warner, now with a ridged forehead, wouldn’t stand out to any but the most faithful). The Undiscovered Country is brimming with such referencing, in particular relating to The Search for Spock, the weakest of the original movies but the one that ironically provides the most food for this final flight (I’m not including Generations as an OST movie, and not just because it isn’t very good; it’s at best half an OST movie, and really more of an extended cameo by one).

While The Undiscovered Country does a great job in furthering the vital friendships between the crew (read: the main trio), what it isn’t is cosy. In that sense, it’s the best kind of send-off. Indeed, the only downside is that, by splitting up the central triumvirate, there isn’t a great Kirk-Spock farewell. In some ways, what we’re served is more interesting, though.

Spock is very much positioned in the manner of Sherlock Holmes (thank goodness there were no holodecks on this Enterprise), allowing Meyer to tap into one of his great obsessions, as the Captain/First Officer investigates who is responsible for framing the Enterprise (personified in the sentencing to hard labour of Kirk and McCoy). Certain beats echo The Wrath of Khan: Kirk and McCoy set down on an inhospitable rock; Spock indulging a young protégé (originally intended to be Saavik, until Gene Roddenberry nixed it); and a Shakespeare-spouting villain.

Yes, unfortunately Christopher Plummer’s Chang is no Khan, and the penchant for quotations, on a level approaching verbal diarrhoea, only emphasises that. On the other, hand, it’s almost worth the self-indulgence for getting to the point where McCoy, having heard one “Cry havoc!” too many – or more precisely “I am constant as the northern star!” – exclaims “I’d give real money if he’d shut up”.

Plummer’s still good, mind, far more memorable than Christopher Lloyd’s previous chief Klingon antagonist in The Search for Spock, and I suspect his drawbacks are as much to do with the limitations of Klingons themselves as failing to ascend to the pantheon of screen bad guys. On the subject of quotations, I’ve also always found (Warner’s) Chancellor Gorkon’s appropriation of “the undiscovered country” to mean something entirely different from its use in Hamlet – here it refers to the future – a touch annoying. They could at least have had a human correct him.

Kirk: I have never trusted Klingons and I never will. I could never forgive them for the death of my boy.

The best of The Undiscovered Country comes in the first two acts, in establishing the conflict rather than resolving it. There’s formidable potential in a crew who know the lie of the universe being faced with moving goalposts, particularly as it draws distinctions between the moderate Spock and the unyielding Kirk. “They’re dying” brokers Spock, of an empire thrown into disarray by a Chernobyl-esque destruction of a Klingon moon and with it a major energy production centre and the home-world’s ozone layer (the latter is rather over-egging the pudding, let’s be honest; all that was really missing was the collapse of the Klingon stock market).

Kirk’s response, later mulling a photo of his Klingon-slaughtered son (Merritt Butrick died a year before shooting), is the blunt “Let them die”. It’s a fine, intense exchange, up with the best of Trek, and a snub to Roddenberry, whose hankering after an idyllic STNG future didn’t seem to recognise that drama needs conflict to work.

Gorkon: If there is to be a brave new world, our generation is going to have the hardest time living in it.

While Gorkon smooths over some rough edges during an uneasy dinner (“Guess who’s coming…” lobs in Chekov), the crew’s subsequent discussion of how objectionable they find the Klingons (“Did you see the way they eat?”) draws Spock’s undisguised disgust. Again, repositioning the Enterprise stalwarts as a bunch of racists is perhaps a little unsubtle, but it’s also quite a daring thing, so kudos for going there. Likewise, the comments that “The Federation is no more than a homo sapiens-only club”; some of the dialogue here resonates as an outright swipe in Roddenbery’s direction, digging up every flaw in his shiny but hollow vision.

Spock: Is it possible that we two, you and I, have grown so old and inflexible that we have outlived our usefulness? Would that constitute a joke?

It’s left to Spock to be the beacon of light, he who sees “Logic is the beginning of wisdom… not the end” and who regards peace with the Klingon empire as desirable on a rational basis. While the picture does good work in bringing Kirk round, particularly with his early decision not to go on the attack – “Signal our surrender. We’ll not be the instigators of full-scale war on the eve of peace” – I’ll admit to never having being entirely convinced by Valeris’ motivation; it just isn’t fleshed out enough.

And, while Kim Cattrall is appealing in the role, there’s something perhaps a little to emotive about her. That said, the forced mind-meld sequence is an interesting one, conjuring as it does themes of rape and violation, and of legitimising torture in order to obtain required information.

That it is Spock who inflicts this, applying logic in a “needs of the many” sense, is a potentially powerful flipside to his self-sacrifice in The Wrath of Khan, but it never quite packs the wallop it should, probably because we lack sufficient investment in Valeris’ fate (if, on the other hand, this had been Kirstie Alley in her fourth appearance as Saavik, we’d no doubt appreciate the scene very differently).

Chang: Dr McCoy, would you be so good as to tell me? What is your current medical status?
McCoy: Well, aside from a touch of arthritis, I’d say pretty good.

Star Trek VI embraces the opportunity for lively set pieces, from the purple blood of the Zero G sequence (quite cutting edge at the time) to the appearance of Iman on Rura Penthe as shapeshifter Martia, all aided and abetted by a solid Cliff Eidelman score (borrowing liberally from Holst’s Mars Suite).

Pairing Kirk and McCoy, and giving something of a boost to McCoy’s standard role, pays off. Kelly more than delivers throughout, his pleading that he did his best (“I was desperate to save him!”) during the show trial coming across as commandingly raw, and the prosecution’s laying into him as old, inebriated and incompetent is ruthlessly effective (that said, how is it that McCoy knows nothing about Klingon anatomy? Wouldn’t the Federation have gone out of its way to study everything they could about their most constant enemy?)

Kirk: I can’t believe I kissed you.
Martia Kirk: Must have been your lifelong ambition.

Martia’s presence allows Shatner some amusing screen hogging, playing Kirk wisecracking against a shapeshifter playing Kirk, while McCoy gets to make jabs at his unerring libido (“What IS it with you, anyway?”) There’s also a nice line in comedy of contrast, as Spock announces he is convinced Kirk will be ready, when the time comes to effect a rescue (“However, if I know the captain, by this time, he is deep into planning his escape”), only for us to cut to Jim getting beaten up.

Klingon Commandant: Since you’re all going to die anyway, why not tell you? His name is–
Kirk (materialising on the Enterprise): No! No! Of all the – son of a – Couldn’t you have waited two seconds? They were just about to explain the whole thing.
Chekov: You want to go back?

The rest of the crew? Scotty gets to shoot a Klingon sniper (depositing Doohan in an action sequence isn’t exactly a tension-builder). Sulu’s in charge of Excelsior (another Star Trek III call back, and the ship’s still as egg-bound and ugly as ever). Chekov is again serviced some amusing lines. Uhura… Damn, they forgot about her again (she refused the “Guess who’s coming to dinner?” line). Oh wait, she speaks some Klingon. Badly.

There’s also Mr Robot’s dad, Christian Slater, as a young recruit on Excelsior. Now, why couldn’t they have fashioned a new series with him as captain of the ship? I expect there are already some novels out there somewhere that have done exactly that, but it would be nice little piece of valid continuity, 25 years on, and you’d get a captain with a shred of personality. Also making appearances are Michael “Captain, I have a terrible headache” Dorn as Worf’s (granddad), René “Odo” Auberjonois, and Brock “Joseph Sisko” Peters.

Kirk: Spock, you want to know something? Everybody’s human.
Spock: I find that remark… insulting.

Star Trek VI: The Undiscovered Country always loses me a little with the finale. The modified photon torpedo is a little deus ex-, cleverness conjured out of thin air, so not altogether satisfying, and foiling the assassination attempt on President Kurtwood Smith is a something of damp squib. Nevertheless, I like the decision not to make a big thing of this being the end of their adventures. Series and movies tend to go overboard with such monumental events now, whereas here, we’re told there will be a laborious return to dock for decommissioning (“If I were human, I believe my response would be ‘Go to hell’. If I were human”) and a standard bit of smug nautical captaincy (“Second star to the right and straight on til morning”).

The Undiscovered Country, might have been more epic than it is, certainly, it might have delivered a more climactic send-off, but I’m more than happy to settle for a simply very satisfying movie. 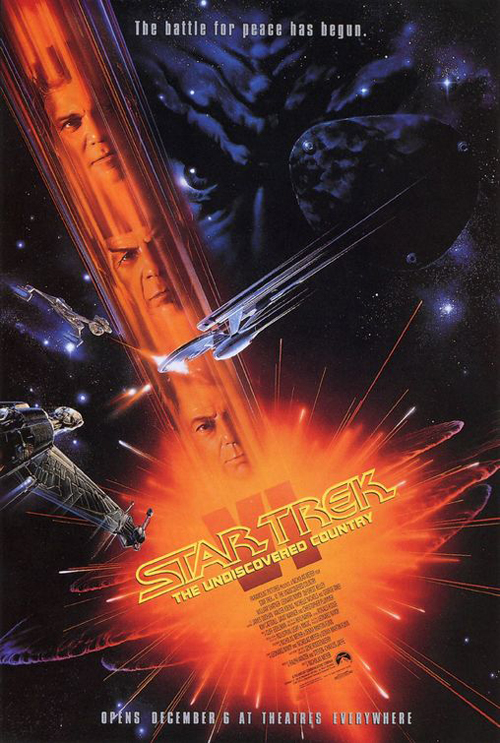