I didn’t find the fifth instalment quite as compelling as the previous quartet, I suspect mainly because it flits about so much, from character to character and plotline to plotline, never alighting quite long enough to pick up steam. Nevertheless, there’s some great, inimitable material here, and several lurches from comedy to extreme violence that couldn’t be more Lynchian.

Most substantial in coverage are the dual Coops. Real Coop-as-Dougie’s Chance the Gardener interactions are still diverting, but I’m definitely feeling it’s time to cut to the chase now. We’re almost a third of the way through the run, and you don’t want to end up feeling short-changed on having the series’ main character resuscitated. Although, that’s exactly the kind of thing Lynch would probably do: prevaricate by avoiding his most iconic figure.

Nevertheless, the ongoing theme of the instinctual essence of Coop, reduced to a guiding intuition whilst he’s operating on barely any motor functions at all, continue to mine rich comic seams. So he follows the guidance of a cowboy statue to work, and follows the coffee his well-meaning co-worker Phil (Josh Fadem) is carrying, managing to appropriate a cup through persistence (“Damn good Joe”; naturally, it belongs to Frank, although more surprisingly – and hilariously – Bob Stephenson’s Frank, initially put out, discovers he really loves green tea lattes).

Further signs of synchronicity and destiny are Dougie working at Lucky 7 Insurance; having covered the domestic scene, new-born Coop’s odyssey of American life now segues into the work arena. The highlight of which is another light switching on over a particularly ravaged looking Tom Sizemore as Anthony Sinclair, when he claims “Littlefield’s legit”; “He’s lying” pronounces Coop, before returning to a torpor. The rest is par for the course: more japery involving a bursting bladder, being loaded with case files to look through, facing the wrong way in an elevator and finishing up once again at the cowboy statue as dusk falls.

Bradley Mitchum: And you let us know if this man ever comes through here again.

Other odd Coop-related scenes include Jade putting the key to Coop’s Great Northern room in the mailbox, and carjackers mirthfully blowing themselves up when they attempt to steal Dougie’s car: a particularly twisted Lynch set-up, as we wonder if the druggie mum’s kid is going to get it.

And there’s more, particularly unrestrained, violence as the Mitchum brothers lay into poor Supervisor Burns (“Are you trying to tell me you weren’t in on this?”), blaming him for Coop’s multi-jackpots (the disinterested casino girls are a classic Lynch tableau). Robert Knepper is the particularly vicious one (Rodney) but something tells me Jim Belushi (Bradley Mitchum) isn’t much better. It’s also impossible to believe Lynch and Frost would set this up without Coop finding his way back to the casino at some point (hopefully sooner rather than later).

Warden Murphy: What did this guy just do?

If Coop is just batty, Evil Coop is coming out with some bonkers stuff to more malignant ends. I wondered about the “You’re still with me. That’s good” in reference to Bob (complete with face morphing) as he looks in the mirror (Lynch’s use of jump cuts in these original series flashbacks is effectively jolting), suggesting that there’s more than one constituent to his form than simply Bob (the Coop facsimile is a separate shell, as was Dougie?)

Most uncanny, though, is Coop’s phone call; aware that he is being listened to, he punches a botch of numbers into the phone after explaining to his watchers “No, I don’t think I’ll call Mr Strawberry”. Then, announcing the key phrase “The cow jumped over the Moon” as all are distracted by the prison entering alert mode (James Morrison brings his best 24 super-seriousness to Warden Murphy). And a call box reduced in size to what? Why (something to do with Lorraine’s role)? All very baffling. I half expected evil Coop to spirit himself away at that moment, given his evident abilities, but maybe he’s just initiating an offbeat prison break plan.

Constance: Cause of death. It took me a while, but I think someone cut this man’s head off.

There are also separate examinations of his trail underway, with Constance winningly irreverent as she details her post-mortem verdict (it looks like it is Major Briggs, and he has Dougie’s ring inside him, somehow). I hadn’t realised Don Harrison was played by Buffy guy Bailey Chase (probably because he was so non-descript in Season Four) Linking to this is Colonel Davis (Ernie Hudson) sending Lieutenant Knox (Adele Rene) to investigate the Major Briggs database hit. Then there’s Tammy looking at Coop’s/Evil Coop’s finger prints…

Jacoby: The same vast global conspiracy. Different day. You can’t see it, without a cosmic flashlight. Guess what? I’ve got mine. Oh yeah.

The rest of the incidents are Twin Peaks-based, which has perversely become the less interesting place to be in the season thus far, despite there being several standouts here too. Among them, learning why the former Dr Jacobi was spray-painting all those shovels gold; cashing in on conspiracy theorists, of course, the same saps who lapped up Mark Frost’s The Secret History of Twin Peaks, and selling them their own “shiny gold shovel. Dig yourself out of shit”. Only 29.99. Dr Amp’s Gold Shit-Digging Shovel. That’s right, “Shovel your way out of the shit!” He has his devoted viewers, two at least: Jerry Horne, who obviously likes a toke and a titter in the woods, and Nadine, who has probably ordered that shovel tout suite. It’s 7 o’clock, do you know where your freedom is?

Talking of the Hornes, perhaps the most disturbing scene comes from a previously unseen junior (Jerry’s junior, or a Ben offspring? Surely not Audrey’s? Or Johnny’s?) Eamon Farron’s Richard Horne, up to no good (drug deals, most likely) and meeting his contact by smoking by a non-smoking sign in the Bang Bang Bar, is a thoroughly irredeemable piece of work, grabbing and threatening Charlotte (Grace Victoria Cox), who mistakes his cool looks for a cool guy (“I’m gonna laugh when I fuck you, bitch!”) It’s a highly effective scene, as razor-edge in its impending violence as the evil-Coop lockdown scene is uncannily odd.

Only marginally less deplorable is Caleb Landry Jones playing his usual type (“What an asshole”). He is, presumably, Shelly’s son-in-law Steven Burnett – he’s married to Amanda Seyfried’s Becky and appears to be a cokehead. Which is a good fit for Jones, as he always looks like one (or grown-up Macauley Culkin’s little brother). Amusing too to see jock Mike Nelson (Gary Hershberger) now reconstituted as a straight-edged boss. The season’s blissed-out par-excellence moment so far finds Becky staring skywards from Steven’s sports car, listening to The Paris Sisters’ I Love How You Love Me; it’s Lynch girl overdrive (certainly more infused than coffee or green tea lattes will make you)

Apart from that, there’s a reminder that Hawk and Andy aren’t getting anywhere (these Indian jokes may run and run) and a marvellously unruffled Sheriff Truman, refusing to be stirred up by his on-the-warpath wife Doris (Candy Clark), who is enraged by a house full of leaks (“Can you get a bigger bucket?” he suggests nonchalantly) His unwillingness to be bated into an argument only adds fuel to her fire (“You’re impossible!”) The continued references to Harry are odd, though, since we know he won’t be appearing. He’s turned into Mrs Columbo.

This episode feels like it’s caught midway between events either side, without even a glimpse of Gordon and Albert. It’s still a cut above, but a shift down from earlier weird and wonderfulness. 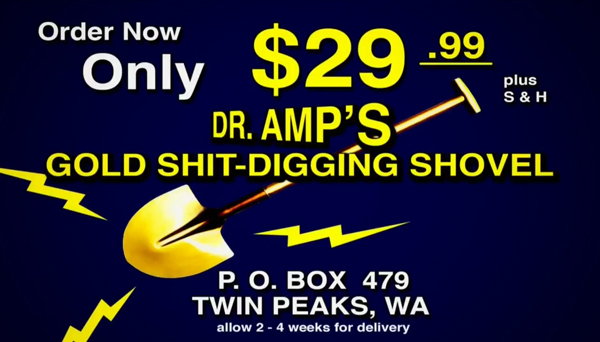 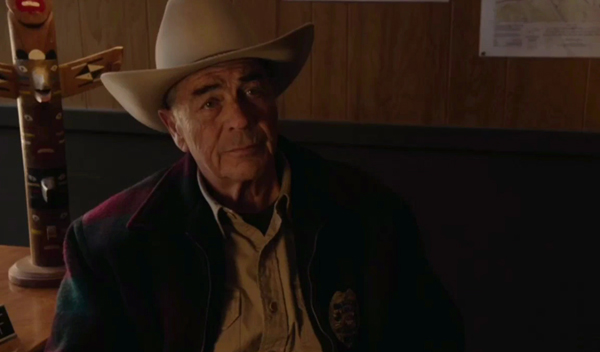 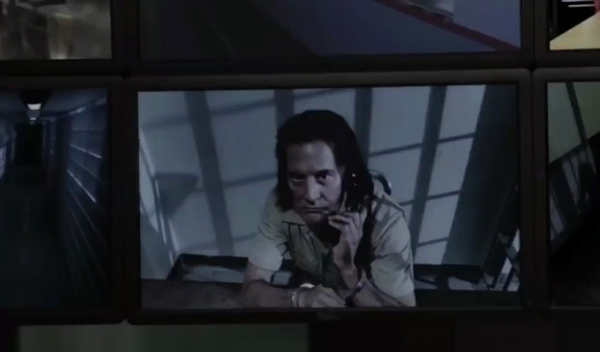 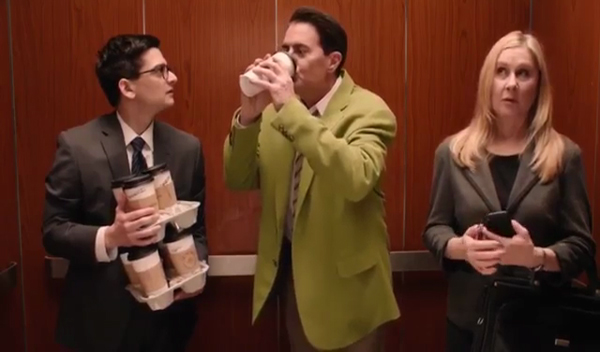 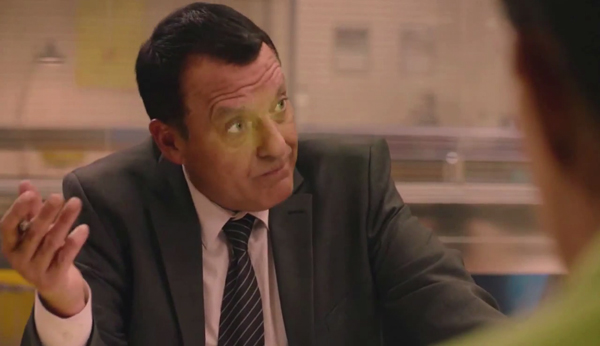 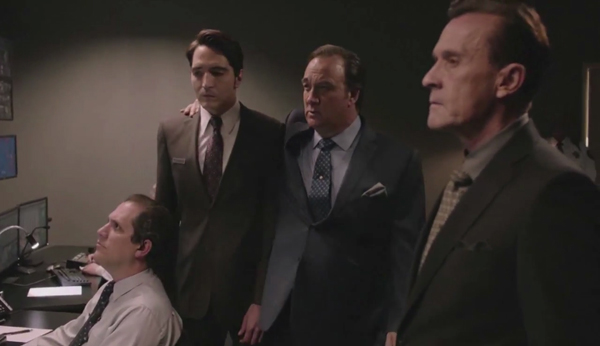