I have a problem with my liver.

The season resumes form with the sixth episode, and incongruity abounds – as much as anything in Twin Peaks is any more or less incongruous than anything else – from the most endearing to the most alarming. The latter of which is up there with the very nastiest nastiness witnessed in a David Lynch joint in the form of butcher for hire Ike “The Spike” Stadtler (Christophe Zajac-Denek), the most alarming killer dwarf since Donald Sutherland led himself on a wild goose chase around Venice in Don’t Look Now.

Lynch’s use of music in Don’t die is both eclectic and disorientating. He concludes with Sharon von Etten crooning Tarifa over the credits, but it’s Ike going on a bloody frenzy to the innocuous and innocent sound of BluntedBeatz’ “I AM” Oldschool HipHop Beat that really sets the episode on edge. This is Lynch at his most visceral, immediate and palpably perturbing.

You hear it before you see it, the screams of the first victim in Lorraine’s office, before the pint-sized professional hit person bursts in and makes a very final mess of her. There’s the same quality here David Fincher exerts over the reservoir murders in Zodiac: sudden, unstoppable, dreadful, relentless. And even after that, there’s the twistedly amusing sight of Ike upset over the state of his now-twisted murder implement.

Contrast that with the uplifting Coop-as-Dougie plotline. Last week, I expressed my reservations about this thread running and running, but for now, I’m just going to roll with it, particularly when the action is reduced to a crawl the way it is here, to mesmerising effect, and accompanied by Johnny Jewel’s Windswept. Before that, we’ve had Coop fixating on a police officer’s badge and a similarly snail-paced sequence in which he ends up sitting at the end of Sonny Jim Jones’ bed eating crisps and clapping the light on and off.

The implication that Coop has to become Coop soon is emphasised by Mike appearing in the carpet once again (“You have to wake up. Wake up. Don’t die. Don’t die. Don’t die” – in an episode where death is all around and very immediate). If his mind isn’t ready to return, there’s an enervating sensation to realising Coop’s being guided on his path yet again, to imprint seemingly abstract lines and ladders and squiggles on this case files.

Bushnell Mullins: What the hell are all these childish scribbles?

It seems like there must be some rhyme or reason, but the pay-off, in which the gloriously-named Bushnell Mullins (Don Murray), all ready to chew Dougie out some more, happens upon some inscrutable revelation they conceal, is a stroke of genius (“Dougie, Thank you. I want you to keep this to yourself. This is disturbing”). Notably too, Dougie is wearing a Coop suit in this scene, as if subtly regaining something of himself (and his realisation of Bushnell’s boxing younger self may be setting the scene for more extensive connecting of the fragmented dots of comprehension).

Dougie at least appears to have some reprisals delayed, thanks to Janey-E’s spirited confrontation with a pair of extortionists, Tommy (Ronnie Gene Blevins) and Jimmy (Jeremy Davies). Davies, wholly unsurprisingly, is playing exactly the same dishevelled small-time sleazebag he essayed to perfection in Justified. He seems to have willingly typecast himself in this kind of role. But since Dougie also looks to be on Ike’s prospective hit list (sent to him by Duncan Todd, at the behest of the Mitchum brothers, presumably), an attack on Coop with a bent instrument could be shortly in the offing.

Most of the rest of the episode is Twin Peaks-heavy, but for the continued teasing of Blue Rose… who is indeed Diane! And is indeed Laura Dern, in a blonde Louise Brookes bob. It’s tantamount to seeing Mrs Columbo, or ’er indoors, in the flesh, but I’m sure Lynch and Frost know what they’re doing.

Twin Peaks itself also offers interesting reversals, twists and illuminations. After such an unsettling introduction, Richard Horne is put entirely in his place by an altogether weirder and more lunatic specimen (Balthazar Getty’s Red), one who can do some seriously weird shit with coins that remain in the air far longer than they ought, and which appear and disappear in surprising places. He’s also given to typical impenetrable Lynch statements (“I have a problem with my liver”, “Did you ever see the movie, The King and I?”)

It has been pointed out that the appearing/disappearing act has also been seen with Mrs Tremond’s grandson and the handful of creamed corn, which suggests some kind of garmonbozia thing going on there: it being “pain and sorrow”, and Richard losing the coin toss before falling victim to his own pain and sorrow (and inflicting it on others).

I’m not sure Red is up there in the pantheon of threatening Lynch psychos at this point (Ike steals his thunder rather, lathering red over the whole episode), but it’s nice to see him take addled Dick down a peg or two, to the extent that the latter’s actual humanised… until he ploughs into a wee bairn in his truck (“I’ll showing you ‘fucking kid’”, he announces enraged, before mowing down a kid). And even then, he’s gone from being a one-note psycho to one who desperately and incompetently wipes the blood off his radiator grill.

This incident gets to the nub of the episode (Don’t die), from the first appearance of the amazing Harry Dean Stanton as Carl Rodd (almost 91 and looking just about the same as he ever was), from Fire Walk with Me – as is the Number 6 on telegraph poles – and The Secret History of Twin Peaks. Carl talks about how he goes into town every day just to get out of the trailer park (“Not much to look forward to except the hammer banging down at his age”) and cheerfully announces “I’ve been smoking for 75 years, every fucking day” (which totally came from Lynch).

Carl, who sees the mother and child in the park before the accident and is no stranger to spiritual experiences, views the child’s spirit ascend heavenwards in a fizz of yellow light, before silently going to console the mother. It’s a scene that plays at the not untypical Lynch midpoint between all-consuming emotional depths and the absurd, the reactions of the inept extra onlookers bordering on the farcical, with the crackle of electricity pylons (following the earlier red stop light) that tops the scene underlining that this is indeed the director’s oeuvre through and through.

While I don’t particularly relish further episodes of Ike utilising Spike, a nasty end for Deputy Chad (John Pirruccello), who is proving to be a particularly deplorable specimen (“He couldn’t take being a soldier” he mocks of Frank and Doris’ dead son), wouldn’t be completely objectionable at this stage (although the show being what it is, I wouldn’t be surprised if he is turned around into a sympathetic character).

More significantly – and also involving Chad, who threatens to tell Frank on Hawk taking apart the toilet cubicle – the reveal of the Log Lady’s cryptic message, and the importance of the Deputy Chief’s heritage, are bound in a coin with the head of a Native American on it (another coin, following the Red spectacle). This leads him to pieces of paper lodged down the Nez Perce American Manufacturing door, also with a Native American pictured. The most obvious conclusion is that they’re from Laura’s diary… (“The good Dale is in the Lodge, and he can’t leave. Write it in your diary”).

An episode that keeps you on your toes, running the gamut from sedentary to shocking and, in the middle, somewhere between the two. What’s most interesting is how long Lynch is sustaining all these different threads, feeling no urgency for any of them to dovetail; this is, in its way, ground-breaking long-form storytelling, with only really the credits and weekly performance at the Bang Bang Bar betraying any sense that this is structured in any traditional TV sense, rather than an eighteen-hour movie divided up for purely logistical reasons. 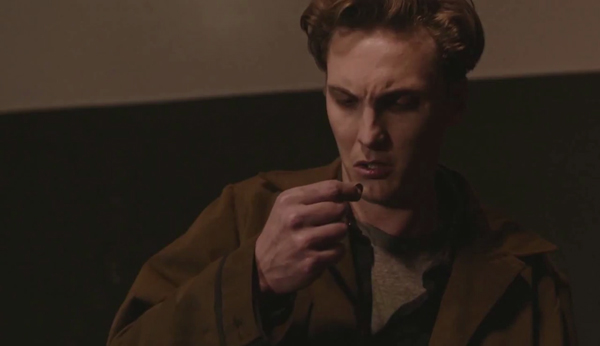 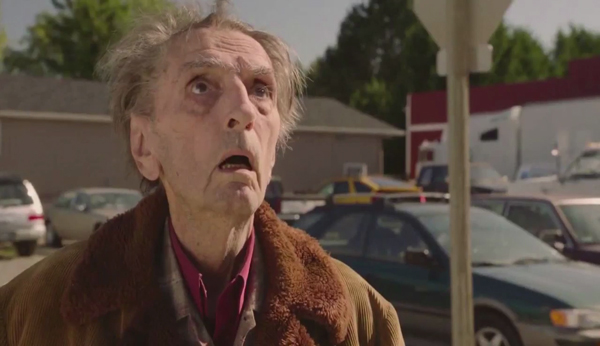 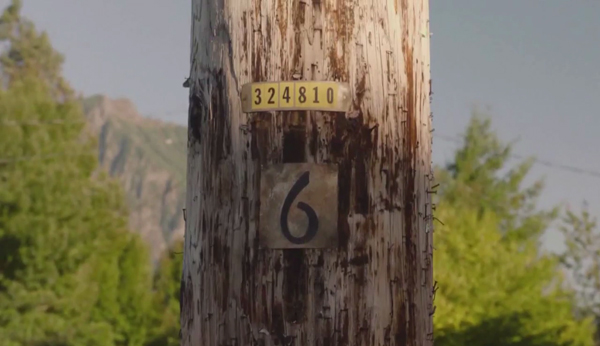 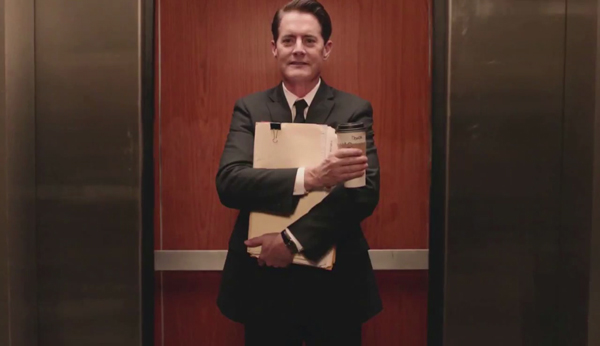 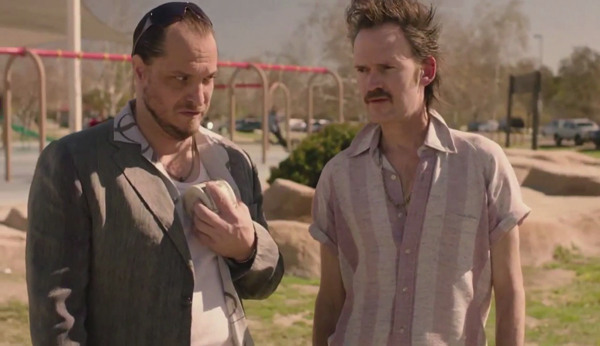 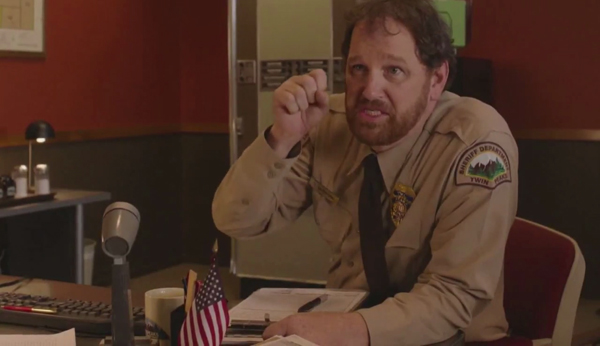