What ho, Brinkley. So, do you think we’re going to get along, what?

Jeeves and Wooster
2.4: Jeeves in the Country
(aka Chuffy)

The plundering of Thank You, Jeeves elicits two more of the series’ best episodes, the first of which finds Bertie retiring to the country. He’s accompanied by a new valet, the insolent, incompetent and inebriate Brinkley (a wonderfully sour, sullen performance from Fred Evans, who would receive an encore in the final season). Brinkley is installed after Jeeves is forced to resign over his master’s refusal to give up the trumpet (“not an instrument for a gentleman”; in the book, it’s a banjulele).

Chuffnell Hall is the setting (filmed at Wrotham Park in Hertfordshire), although the best of the action takes place around Bertie’s digs in Chuffnell Regis (Clovelly, Devon). His old pal Reginald “Chuffy” Chuffnell (Marmaduke Lord Chuffnell) has obligingly rented the place to him, much to the grievance of the villagers; Bertie’s trumpeting is now disrupting their beatific beach (it’s a lovely spot, one of the most evocative in the series).

Jeeves is snapped up into the employ of Chuffy almost as soon as he leaves Bertie’s service, and then (as a scheme by Chuffy) passed on to J Washburn Stoker, so he gets around in this one. And again, the interweaving of mistaken conclusions, undesirable encounters and conflagrant altercations (and actual conflagrations) translates perfectly from the page. Albeit, the plotting has been pared down and streamlined in order to divide Wodehouse’s narrative into two distinct but connected episodes.

Naturally, jealousy abounds when Chuffy (Matthew Solon, also in The Adventures of Sherlock Holmes’ The Norwood Builder) learns that Pauline Stoker, whom he plans to marry, was once betrothed to Bertie (“I can honestly say, Pauline’s one of the nicest girls I’ve ever been engaged to”). This is as nothing, however, next to the apoplexy with which Stoker views our favourite privileged chump.

Not helping matters is Bertie’s reckless plan to inspire sufficient jealousy in Chuffy that he proposes to Pauline; being proud, Lord Chuffnell believes he should be able to support his bride-to-be sufficiently, so won’t pop the question until he has made a deal to sell the hall to J Washburn. Inevitably, Bertie’s ruse backfires, and there’s much amusement to be garnered from his attempts to deflect an accusatory finger. He attempts to explain his proclivity for engagement – one friend suggested once that “the sight of me hanging around like a loony sheep arose the maternal instinct in women” – and protests that he only bestowed a brotherly kiss on Pauline in congratulation of her putative engagement to Chuffy.

None of this is remedial, as Stoker locks Pauline up on his yacht to prevent her from eloping with Bertie; she promptly swims ashore, breaks into his cottage and climbs into his bed (“You’re in my heliotrope pyjamas!”) Sharon Holm is very likeable as Pauline, and as Bertie says of her in his PJs, “They suit you, I must say”.

The ensuing string of farcical incidents finds Bertie opting to sleep in the potting shed. There, he is discovered by Sergeant Voules (Dave Atkins) and his nephew, Constable Dobson (William Waghorn), nosy members of the local constabulary who earlier pestered him. The now-arrived Chuffy is convinced Bertie is “Tight as an owl”.

There’s some very funny “stupid coppers” dialogue (the police are always idiots in Wodehouse, just as children are always little beasts), concerned as they are over “The Danger of marauders getting through” and warning “The marauders are probably lurking, sir”. They claim Bertie is “Shackling the police in their duties” and depart unimpressed when Bertie refuses to play (“Come, Dennis. He’s being obdurate”).

Bertie Wooster: The Chuffnells look like a French army who just got to Moscow and discovered it’s early closing day.

It’s the beastly children who do for the plan to sell the hall (Chuffy can’t afford the upkeep, although he still maintains the village). There’s a serious incident involving Chuffy hitting Stoker’s son Dwight, and another as J Washburne gives Chuffy’s nephew Seabury a kick (“the dark inevitability of Greek tragedy” as Bertie puts it).

At no point are we intended to feel sympathy for Seabury, and it’s always refreshing how little Bertie is persuaded by juniors’ charms (such that 2.6 is a particular aberration). When Seabury, a devotee of gangster films, announces “I want five shillings, for protection”, Bertie’s response is an immediate “What? You won’t get five shillings out of me”. The urchin is also blessed with a dreadfully indulgent, apologetic mother Myrtle (Fidelis Morgan), given to such wet remonstrations as “Don’t run, Seabury dear. You might hurt yourself”. When Bertie hears Stoker aimed one at the little tyke, his response is an awed, “Oh Jeeves, tell me he got him”.

Pauline: I sometimes feel that he was a king in Babylon, when I was a Christian slave.
Bertie Wooster: Really? Well, you know best, of course. Very doubtful I’d have said, myself.

The supporting cast are all on good form, although there is a tendency to lay on the Noo-Yawk accents a bit thick, even from natives like Manning Redwood (Stoker). His “Woooo-stir” is always carries a very memorable, disdainful flavouring, however.

Bertie Wooster: What ho, Brinkley. So, do you think we’re going to get along, what?
Brinkley: I don’t know yet.

Evans’ Brinkley is undoubtedly the highlight of the episode, even if Anne Dudley is prone to overdoing the “wa-wa-wa-wa” music that accompanies his antisocial activities. He’s entirely antithetical to Jeeves. And any notion of civility and decorum, come to that, preparing Bertie’s meat pie with a fag in his mouth, and then, after Bertie has got a sniff of it and suggested Brinkley have it instead, comments “I’m not eating that”. If there were a valet’s union, he would no doubt be first in line (“I told him, I’m not a machine, you know”). He doesn’t even feign interest in Bertie’s troubles. It’s entirely appropriate that Brinkley should be responsible for burning down the cottage (which leads to the discovery of Pauline, hidden within, and blows rained down on Bertie).

Bertie Wooster: We shall meet at Philippi, I dare say.

As such, Bertie’s response (“I blame you for this, Jeeves”) is, as usual, entirely fair, since it was Jeeves who initiated the turn of events, and who ensured the trumpet was killed in the inferno. All is forgiven of course, with the valet revealing his cow-milking skills and that “Neither Mr Stoker nor Lord Chuffnell feel themselves quite able to measure up to the required standard”. The best adaptations have tended to require minimal pruning in order to keep the essential brisk farce intact, and this is one of them, returning Season Two to the high standard of the first couple of episodes. 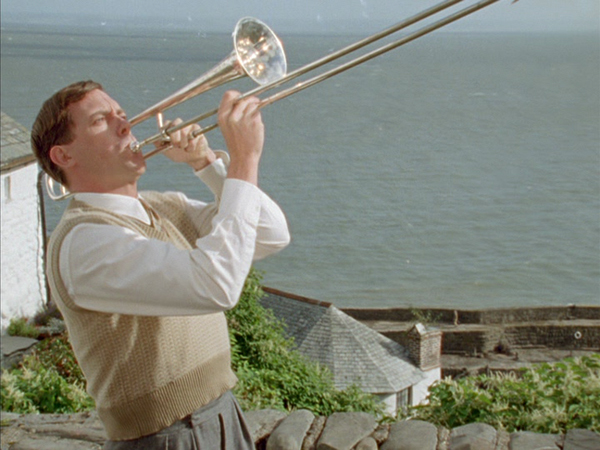 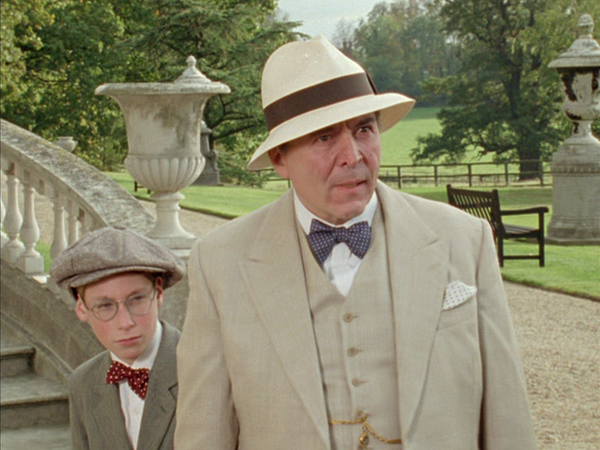 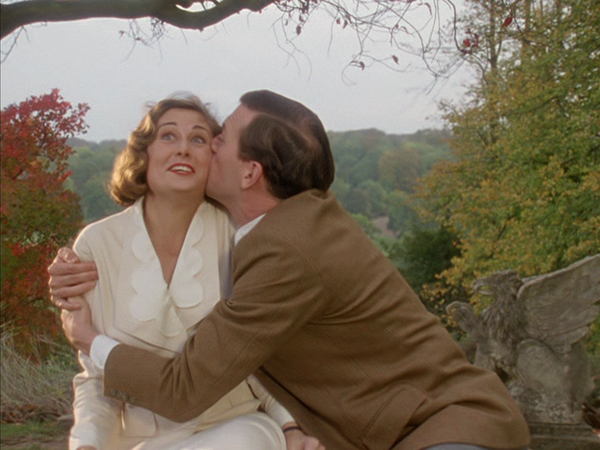 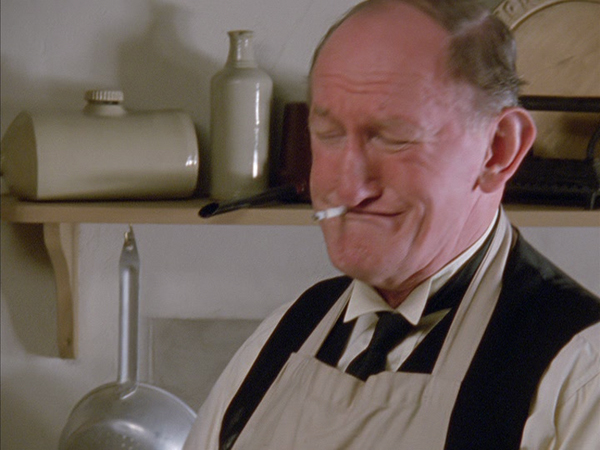 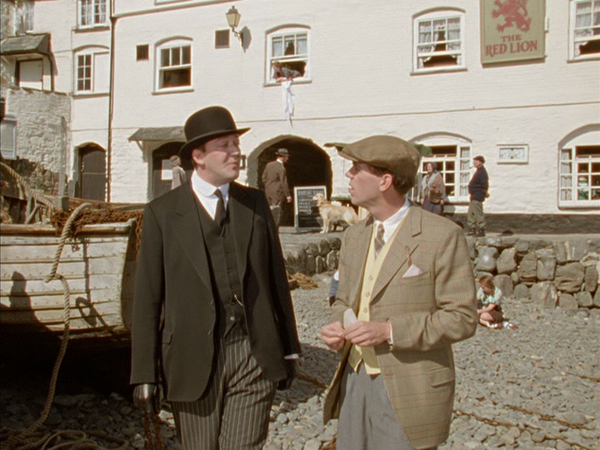 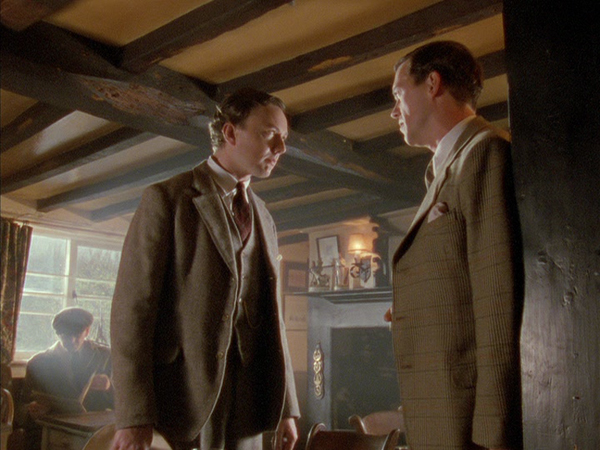 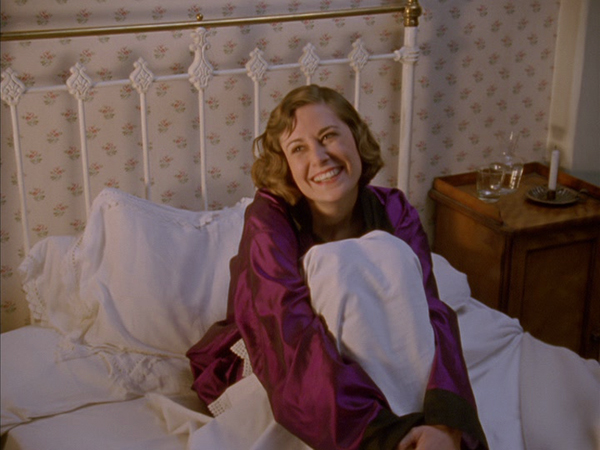 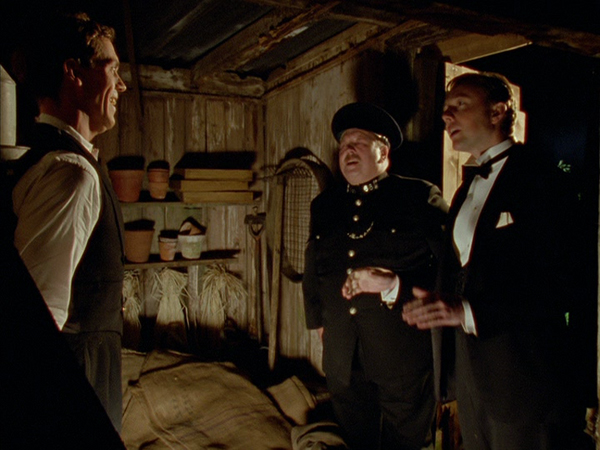 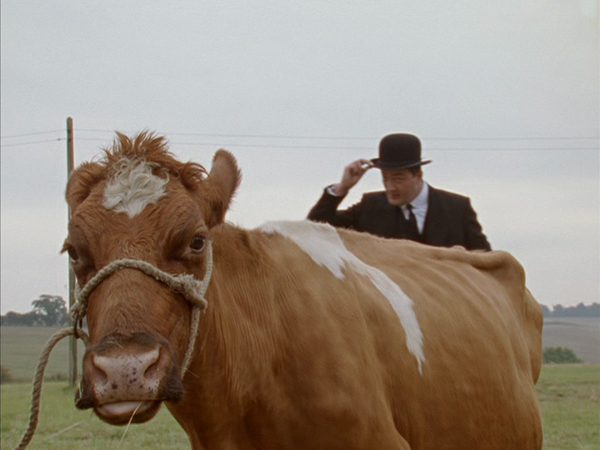 Thank You, Jeeves
(The “Babylon” line comes from Bingo and the Little Woman, Chapter 17 of The Inimitable Jeeves)