I’m supposed to watch the box and see if anything appears inside.

Well, Lynch hasn’t lost it, that much is clear. Not his marbles, which he never had, of course, but his capacity for weirdness, hilarity, discord and the outright disturbing, all of which are brewing away potently in Season Three of Twin Peaks. What’s most striking, though, and something I’ve occasionally found a detraction from his work, is that the presence of Mark Frost ensures there’s a lucid narrative thread upon which to hang his strange fascinations. It means that, even when we go on a diversion into five minutes of plot-free surrealism, or one of Lynch’s trademark crawl-act comedies (which are sublime, as long as you’re willing to pace yourself), it won’t be long before – potentially remaining unanswered – mystery and intrigue will pull us back on track.

I’d read, not least from Lynch himself, that his prequel movie Fire Walk with Me would indicate the tone of Season Three, but that might be a touch misleading. If you took the first act, the non-Laura Palmer part, the fragmented but fascinating part, you might have something (I know there’s a spirited defence of the picture from many quarters, first expounded by Kim Newman when it debuted, but as much as I admire parts of it – and Sheryl Lee’s performance is phenomenal – I still don’t think it really works as a movie, and I still don’t think it really justifies its prequel status; Lynch, after all, was never even going to reveal Laura’s murderer, so then to go and make a film filling in this background is suggestive of how inessential it was to join the dots. Even as an examination of horrific abuse, I tend to think more is less).

But you’d be as well to draw attention to Lost Highway (alter-ego evil Cooper in biker jacket), Eraserhead (any of the cosmic weirdness on display), Wild at Heart (the various brain-spattered viscera, and particularly the upchuck – of whatever nature – on the carpet) and even On the Air (the batty special effects).

It would be difficult to label any of the first four episodes driven; indeed, they’re almost wilfully abstract and fragmented in places, unless you’re alert to the mystery of Coop as the glue that holds the various pieces of character and location together (rather than the more tangible mystery of the murder of a schoolgirl). Without network edicts, Lynch is free to be as tangential as he likes, which in a way makes it surprising the results are as compelling as they are.  Note: although this review concentrates on the first two episodes, I may reference the next two here as I watched them in one session, so as to hold the train of thought.

What’s instantly most evident about Peaks 3.0 is that it’s largely the new characters and scenarios that are the immediate winners, rather than those hearkening back to, or continuing, the old. In the case of Ben and Jerry Horne (Richard Beymer and David Patrick Kelly), their couple of scenes simply feel tired, Beymer particularly lacking the energy to give the same-old-brothers vibe anything (and Ashley Judd currently at least, appears superfluous).

Russ Tamblyn’s Dr Jacoby’s role is so oblique – taking delivery of shovels and then spraying them gold in 3.3, the latter scene going on so long, it becomes almost hypnotic – as not to indicate anything either way.  The familiar shtick of Lucy (Kimmy Robertson) and Andy (Harry Goaz) has picked up where it left off, while Carel Struycken has to fill in in the Red Room for his pint-sized, departed colleague (now he’s turned into a blob in a tree).

The Arm: He must come back in before you can go out.

There’s a familiarity, obviously intentional, when it comes to Laura Palmer’s repeated dialogue and the Black Lodge scenes generally, with Cooper quizzing her about her identity and receiving evasive responses (“I am dead yet I live”) and further enigmatic information (“Is it future or is it past”). But it means it isn’t until the appearance of the Arm, resembling some spawn of Eraserhead lodged in the branches of a dead tree, given to cryptic pronouncements (“I am the arm. And I sound like this… The evolution of the arm”), that we really feel like we’re going somewhere, that Lynch is really channelling his unfettered subconscious once more, and it’s mesmerising to behold.

Other characters are in a holding pattern (Grace Zabriskie’s Sarah Palmer watching lions tear apart bison on TV, accompanied by copious booze – Sarah, that is, not the lions and bison). Mädchen Amick’s Shelly is bigging up James Hurley (James Marshall), who obviously suffered somehow in a motorcycle accident: “James is still cool. He’s always been cool”. Well, maybe to anyone who wasn’t a viewer of the original show, but he’s actually more interesting, genuinely lost and tragic, in a scene here than he was in the previous run full stop.

The Log Lady: Something is missing and you have to find it.

Talking of which, the most welcome surprise is the amount of time devoted to Michael Horse’s Deputy Chief Hawk. In the original, he was given odd moments but never the chance to shine; here, he’s taking on the traditional intuitive Coop role, and in the next episode makes comedy gold out of over-used wise Native American tropes (“The way you will find it is something to do with your heritage”). It’s sad to see Catherine Coulson so fragile, but the Log Lady is used well in both these openers, prodding and teasing the mystery as previously and reintroducing the figurative spectre of Cooper.

Evil Cooper: Tomorrow, I’m supposed to get pulled back into what they call the Black Lodge. But I’m not going. I’ve got a plan for that one.

The other returnee of note is, of course, Kyle McLachlan himself, making great capital of Bob/evil Coop. So much is suggestive in Lynch’s plots that it’s probably asking for trouble to speculate over whether they will lead anywhere, although some answers have been provided already (his “plan for that one”). I had rather expected him to make the most of the opportunity to wreak havoc posing as Cooper at the FBI, but it appears he dropped off the radar and took up a life of more standard-issue crime, one that is coming back on him (“How much do they want me dead?”).

Although, he seems well-equipped to deal with any threats, killing Jack (Steve Baker) by massaging his jaw. He also reveals a trademark method of dispatch, by a gunshot to the head, in a particularly tense and nasty scene with Darya (Nicole LaLiberte) (“Are you going to kill me?”: “Yes, Darya”). It seems evil Cooper still has his double’s tape recorder, which is nice. Perhaps the most intriguing scene finds him take a call from not-Phillip Jeffries (David Bowie in Fire Walk with Me; here, we don’t know, yet), and learn that he met with Major Garland Briggs (but that was 24 years ago, so presumably not the body in the bed). And he is told, “You’re going back in tomorrow, and I will be with Bob again”.

Ben: I’m supposed to watch the box and see if anything appears inside.

But, as noted, the most impactful scenes here are with all-new characters. Those between Ben (Sam Colby) and Tracy (“You’re a bad girl” – Madeline Zima certainly was in Californication) are classic Lynch and therefore entirely distinctive. We wonder if she hasn’t been put up to checking out whatever Ben is doing, and when we find out what he is doing, for an elusive millionaire, we’re none the wiser (“We’re not supposed to say anything about this place, or that glass box”).

Even less so when a freaky apparition, one that outdoes Bob in the primal-fear stakes, is drawn into the room – by their having sex, or is it connected with this being the same moment Cooper drops into the box? Is he, unbeknownst to himself, somehow responsible? – turning the lovebirds to bloody gloop, like they’ve been set upon by a threshing machine.

Then there are the scenes with Bill Hastings (Matthew Lillard), another scenario where you start out second guessing and the reveals indicate otherwise. The respected school principal, bedrock of the community, arrested for murder, seems like textbook Bob-style possession, particularly when he tells wife Phyllis (Cornelia Guest), “I wasn’t there, but I had a dream that night, that I was in her apartment”.

Except, it seems that this was Evil Coop’s set-up, for reasons as yet unclear, and that he’s also setting up Dale’s lawyer George (Neil Dickson), with whom Phyllis is having an affair. The downward progression of the relationship between Dale and Phyllis, more of a plunge towards on abyss, as masks are torn away and they descend into a screaming match in his cell, is expertly done. Her initial, very-Lynchian, obliviousness to the severity of Dale’s situation (“But the Morgans are coming to dinner!”) is revealed as part of her own cold agenda (“You’re going down. Life in prison, Bill. Life in prison”), and then part of Evil Cooper’s (“This is George’s gun” before shooting her in, yes, the head).

Marjorie Green: It was a funny thing. I couldn’t remember my address when I called you on the phone.

I don’t have much to say about the Vegas scene between Mr Todd and Roger, except that I presume – hope – it will become clear(er). The one with Marjorie Green (Melissa Jo Bailey) calling the police because of the terrible smell in her neighbour’s apartment is hilariously inert comedy of strained miscommunication, with attempts to get the keys leading to further misunderstandings (“Am I free to go?” asks Max Perlich’s paranoid handyman, so concerned about being arrested for whatever he feels guilty about that he ignores the officers’ requests for assistance). And then Marjorie announces she has her neighbour’s key after all.

We also have Balthazar Getty being a cock (don’t fall for him, Shelly; he’s another Leo!), Jennifer Jason Leigh (more, please), two Sheriff Trumans (“One is sick and the other is fishing”) and a generally air of undinted oddness that is utterly transfixing.

I’d say this is undiluted lynch, but to reiterate, I think that, unlike some of the mystified mainstream critics’ responses, Frost’s influence ensures Twin Peaks’ return remains accessible. Although, neither of the creators are really doing any favours to anyone who knows nothing about the show. It has that much in common with Fire Walk With Me, at least. 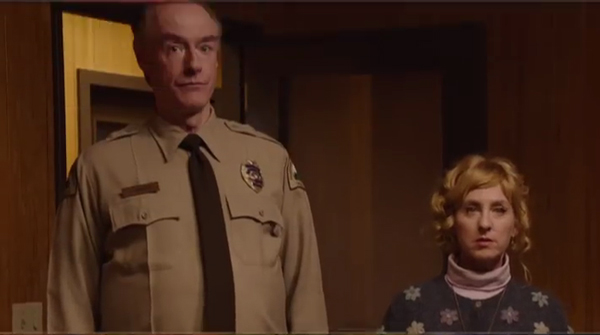 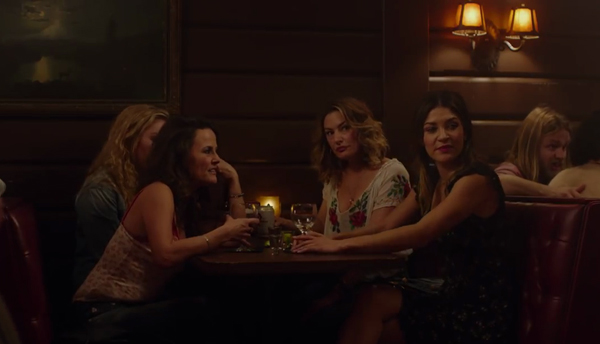 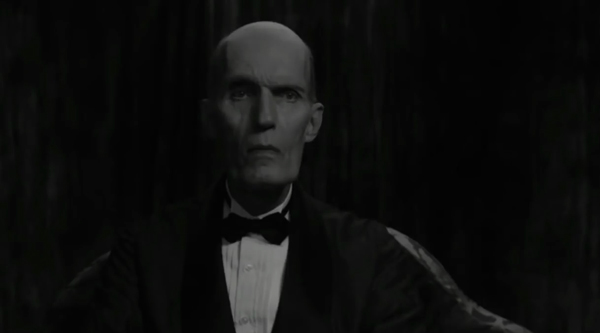 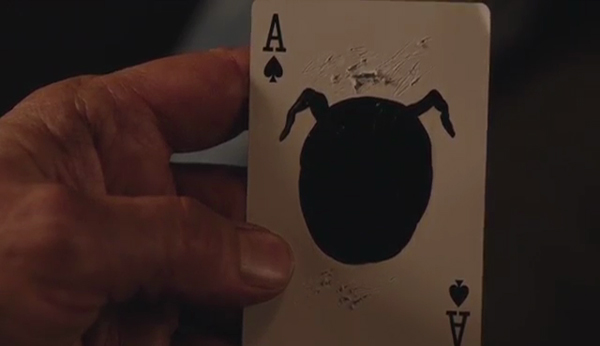 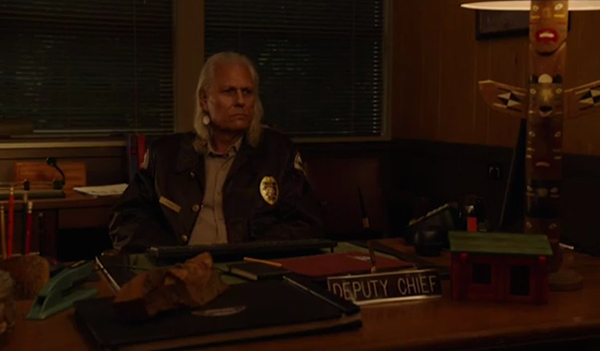 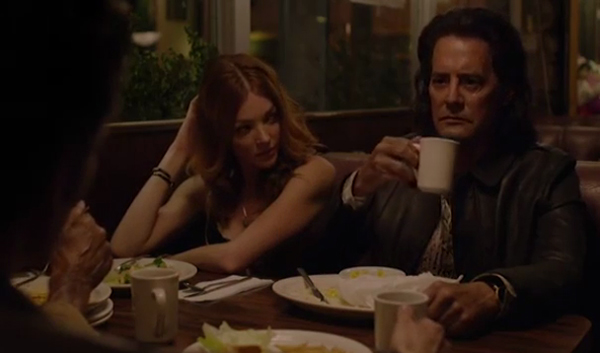 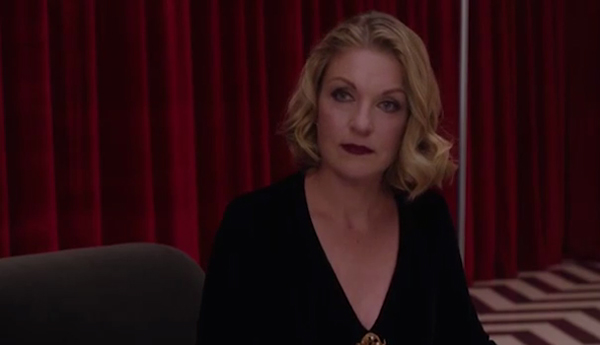 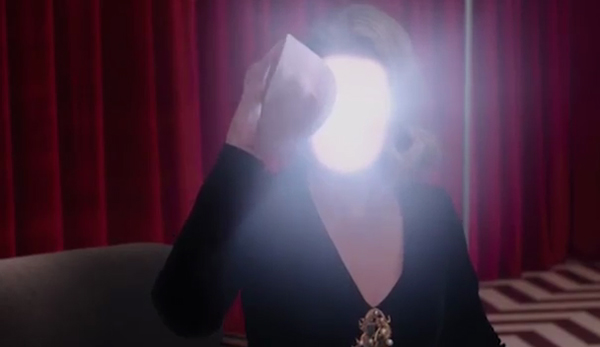