Fun. Brio. That’s what any director needs to bring a sense of to the ever more absurd Fast & Furious franchise at minimum. Action chops are definitely up there, but paramount is an active affinity with how plain silly the series is. And it’s a quality F Gary Gray doesn’t really have, or if he does, he’s never shown it, previously or here. Even his action leaves something to be desired (his The Italian Job remake is far superior in that regard). Which isn’t to suggest there isn’t fun to be had from Fast & Furious 8/The Fate of the Furious, but it’s much more sporadic and performance-based than the previous outing, lacking the unbridled gusto James Wan brought to Furious 7.

But maybe I’m wrong about this. While I’ve seen every instalment in the franchise (only the once, mind) I haven’t followed it avidly in order (1, 4, 5, 2, 3, 6, 7, 8, I think, only the first and last two at the cinema), although, it isn’t as if the makers subjected the series to anything approaching a linear unfolding. I don’t claim to be an authority on its unlikely alchemy, and I’m not one of the faithful who attest to hidden depths explaining its phenomenal global appeal, those who might justify a soberer approach.

I certainly don’t subscribe to its key word being family (and neither do mutual off-screen tiffers Vin Diesel and Dwayne Johnson, by the sound of it), any more than I considered Paul Walker’s Bryan crucial or missed his absence (except that, if Scott Eastwood is intended to represent a nominal replacement, the makers need to go back to the casting couch, or virtual-Walker drawing board). Not that Walker couldn’t be a strong presence, given the right material (check out Running Scared), but he was no more indelible than Diesel.

Yeah, I don’t think these movies would have any problem existing without their “parent” figure, particularly since Vin’s presence seems to rest on spouting sick-making platitudes when he isn’t offering an air of chrome-domed, gimlet-eyed impassivity, even when the scene doesn’t ask for it (like Tom Cruise, he isn’t someone you want to get bogged down with doing love scenes, or even suggesting a sense of emotional contentment). And even more so because, as one of original’s stars – although 2 Fast2Furious is surely more seminal, for introducing Tyrese and Ludacris – a paid-up producer and purported headliner, he sees fit to serve himself great chunks of storyline to show off the depths of his talent and the awesomeness of Dominic Torretto.

Hence, Furious 8’s Dom-goes-rogue plotline, which isn’t, to be fair to Vin, such a bad idea as far as mixing things up goes. Less so, when it calls on Diesel to be heartfelt or raging (the funny thing is, the guy can act, even if steely resolve tends to be his best foot forward, as in the Riddicks), and particularly when he deems fit to have the plot turn on a baby (again this has a positive consequence in terms of another character’s subplot, but not when it comes to Dom getting all angsty).

The extent of my superficial interest in the series is underlined by only very, very vaguely remembering that Elena (Elsa Pataky) had appeared previously. That she actually showed up in 5, 6 and 7 before this just elicited a “Huh?” of stunned realisation. So I’m afraid I didn’t really share Dom’s pain. To a lesser degree, in that the makers don’t appear to know what to do with Ramsey, aside from introducing her to a pair of tight jeans, I also failed to recall that Nathalie Emmanuel (who I did recognise, but from Game of Thrones) was part of the team.

On the subject of thankless female roles, I’m quite sure Charlize was paid handsomely – and her hairdresser, for sculpting her dread head – to kiss Vin and be one-note nasty Cipher, so she probably doesn’t need a whole lot of sympathy, but she should be commanding better roles than this. Then I remembered that she’s due to co-star in a romantic comedy with Seth Rogen, so I guess not.

The rogue Dom storyline is resolved in the least-satisfying manner (roughly along the lines of “I knew he couldn’t be the bad guy!” when he saves his pals in an astonishing piece of driving, whereby he manages to arrange for the bad guys’ rockets to blow up their own evil convoy). But the upside of Diesel being not much fun at all is that, once we get past the cloyingly preachy opening – something about acceptance, forgiveness, racing and polluting the ocean with the explosive remains of your cousin’s clapped-out car – there are significant stretches of the picture devoted to the rest of the team, and that’s really why I go to see a Fast & Furious movie.

Apparently, Vin, being a big insecure baby and needing a pacifier (see what I did there?), nixed a credits scene between Luke Hobbs (The Rock) and Deckard Shaw (The Stath). And apparently Universal, knowing gold dust when they snort it, have just greenlit a spinoff with the pair (the suggestion being Johnson has no wish to work with Vin again). It’s easy to see why, as their feuding banter in the early part of the picture, before, during and after a rather cool prison escape (only dented by Gray’s decision to go shaky cam and thus render swathes of the action and geography incomprehensible) is easily the most satisfying element of Furious 8.

Such that, when they make pals, amid a crummy joke, it’s rather disappointing: what you don’t want is spinoff where they’re best buds (Shaw joining the gang has also elicited a disconcerted response from Furious faithful, who will never forget the death of Han, never). The other highly satisfying element is Deckard subsequently diving onto a plane to save Vin’s baby from evil Cipher, despatching villains while cooing at the tiny tot (evidently inspired by Clive Owen starrer Shoot ‘Em Up). His brother (Luke Evans), I can take or leave, although even his presence is distinguished by the Stath constantly rebating him.

Indeed, it’s difficult to recall, so essential is the Stath’s deadpan delivery and in-your-face sense of humour, how this series got by previously. There’s something immensely satisfying about the swimmer-cum-actor being invited to double up as both action and comedy guy (he’s also by far the best thing about Spy).

I’m not so sure about the Rock, on this evidence. He’s always giving 100 percent, but the material often isn’t up to the task. At least, when he isn’t reacting to the Stath calling him a musclebound moron. Teaching his daughter’s football team or, unforgivably, rehearsing the “Daddy’s gotta go to work” line from Furious 7 (the best moment in that movie, and a sign of creative bankruptcy to try and reformat/encore it) fall flat. He has some nice beats, shouting at Roman “Why are you always shouting?” during the ice chase and quipping “Nasty” after Letty (Michelle Rodriguez) drops a heavy into a propeller. And, hilariously, redirecting a torpedo shooting along the surface of a frozen lake with his bare hands (albeit, you just know Wan would have made the moment sing louder). But you notice how inconsistently serviced he is here, possibly because there’s more of him than last time.

Of the rest of the family, Rodriguez gets just enough to do to suggest she isn’t merely a spare wheel (much of it relating to look pained at Dom’s betrayal, and then elated at his non-betrayal). Tyrese is required to shout a lot, often about shrinkage, express dismay at not making Interpol’s Ten most wanted list (he languishes at eleven, below Ramsey) and generally bounce agreeably off any given player (about the only time Eastwood makes an impression is when they’re trading insults). He’s trying his hardest to make this seem more fun than the movie Gray is making (the beat where he’s skating on a car door, like the torpedo moment, would have been all the better with a zesty director shooting it). Ludacris is likewise always good value.

Kurt Russell brings effortless cool with him and seems right at home playing a character who’s enjoying himself and his status immensely.  Eastwood is carved out of pure wood, so his inexperienced, by-the-book character works, just about, when everyone is treating him horrendously. But completely doesn’t, when he’s asked to loosen up and has no personality to unveil. Helen Mirren makes a significant impression, but mostly because of her posh-lass-does-cock-ernee accent.

It seemed to me there was more conscious violence in this one, although I may just be misremembering previous instalments. Killing off Elena in front of Dom makes for a brutal moment, but would have more impact if any one cared about the character (admittedly, I’m assuming I’m not the only one who didn’t; Dom certainly seems to get over the life-changing incident quite easily). More than that, though, did the entire gang always kill people so cheerfully prior to this? I mean, I can see Deckard and Hobbs doing it (and Bryan, historically), because they’re professionals, but for the rest it seems a bit off. Shouldn’t they stick to daredevil driving and technical wizardry?

In terms of wizardry, script-wise and visually, Chris Morgan has penned every outing since the fourth, and he manages the occasional coup here – the sudden attack on the base and stealing of the God’s Eye – but the remaining items on Cipher’s shopping list (nuclear football, nuclear submarine) are much less disciplined in conception, and Gray singularly fails to take up the slack in execution. There’s an enormous amount of carnage produced during the nuclear football sequence, but none of it engages (aside from the sight of a passenger leaping out of an out-of-control car into oncoming traffic).

The one personal stakes moment, as the crew harpoon Vin’s car, is resolved in a manner that entirely fails to convince. A shame, as it’s a great “now get out of that” (Morgan probably needed to devise it backwards). The ice lake climax just seems to go on and on, occasionally arousing a glimmer of interest, but lacking finesse in its choreography (Gray’s all over the shop) and failing to muster clear, dramatically-engaging goals for each character. When you’re watching it, you’re waiting to get back to the Stath on the plane.

Certainly, if one of the lessons from Fast & Furious 8 is that the series doesn’t need to rely on Vin, and doing so will probably be to its ultimate detriment, a more important one is that they should be ensuring another key team member, the director, will lift Furious 9 to the level of the gloriously demented the series deserves. Gray’s the most pedestrian director these movies have seen since the first two instalments, and it’s moved on a long way since such (relatively) grounded adventures.

There’s also the question of what happens if the Rock and the Stath are off doing their own thing. I guess bring in some replacement larger-than-life characters; there’ll still be Diesel, keeping things real, talking up his serious Dom arcs, waxing seriously lyrical about family and looking seriously uncomfortable when he’s called upon to crack a smile. 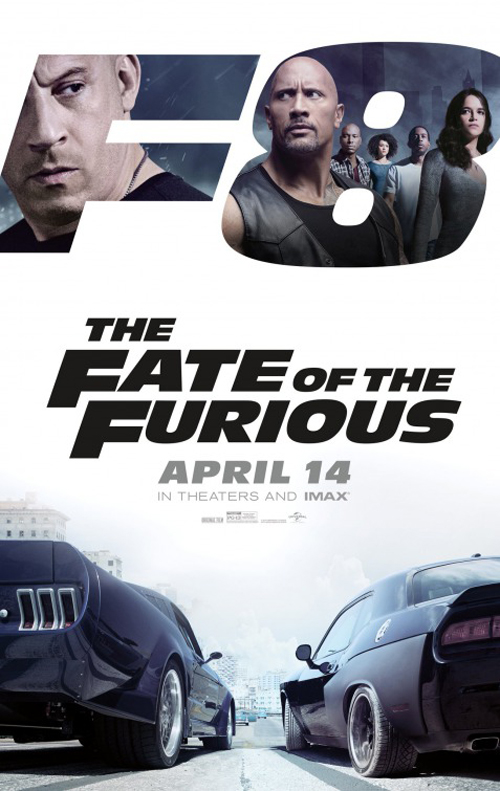