I found the first hour of The Neon Demon mesmerising, an elliptical, synth-driven fever dream and tonal cousin to Beyond the Black Rainbow, ostensibly charting the seductive and destructive path to success in the superficial world of modelling but possibly being about something very much more than that. By the end, however, it had diminished somewhat in my estimation, its cool, retro poise reframed by the most OTT, Grand Guignol, head-on charge. I was left with a shrug, rather than the rapt sense of having been fed through a wringer of revelation. And that’s even with Nicolas Winding Refn’s film being over-ripe for interpretation, so loaded with subtext it’s tantamount to a conspiracy theorist’s wet dream.

I suppose the full-on left turn the picture takes shouldn’t have been a surprise. Refn is as wilfully perverse a filmmaker as his fellow countryman Lars von Trier, but whereas I find von Trier’s work consistently unpalatable, in the vomiting-up-eyeballs sense, Refn’s a different kettle of strange fish, a wilful warper of genre and expectation, one who lacks the true, innate, sublime weirdness of a David Lynch, but for all that, creates transfixing, immersive environments that seem to pull back the hood on unnerving and inherently arcane people, characters, landscapes and realms. I saw it rather snobbily suggested that Only Once Forgives was a litmus test for fans of Drive, sorting those who mistake its relatively commercial furrow from true Refn-ites. Such a view would apply to The Neon Demon and then some, in that case.

It’s possible that the last twenty minutes will send you running for the (Hollywood) hills, but the most extreme necrophile scene in a mainstream movie since Bad Timing (I’m guessing on that, actually, as I don’t make a habit of seeking them out). That and a slow-mo, post-cannibalistic sexy shower, followed by self-immolation via a pair of scissors on the set of a bad Pirelli calendar photo shoot because “I need to get her out of me”, come across as escalation in aid of shock value, rather than adding anything we haven’t already absorbed thematically. So the industry feeds on its own, sucking up the young and innocent and spewing them out in a tangle of body parts. So it’s a hotbed of exploitation. Colour me unfazed.

On the other hand, is Jena Malone a refashioned, less jingle-jangle Jimmy Savile (perhaps surprisingly embodied in the otherwise dismal latest “season” of Sherlock; surprisingly, since Steven Moffat isn’t exactly known for his keen sense of the topical, unless it’s through cringe-making pop culture references)? This aspect – intertwining the fashion industry with occult acts and iconography – makes The Neon Demon more arresting, demanding of attention, but the full-blooded excess at the end rather blunts the incrementally more unsettling dis-ease of the world Jesse finds herself in and quickly comes to adopt. It’s the suggestive versus the in-the-face.

The former is there long before Keanu references the “Real Lolita shit” in Room 214; Christina Hendricks’ agent has no qualms about signing an underage girl (“Honey, people believe what they are told”) and the procedure for facilitating this is well-rehearsed. Anyone familiar with the gist of Pizzagate (“Fake News” or otherwise, in which case it simply joins the fake news touted by daily the mainstream media) would find it easy to draw parallels with a movie where the ingénue is asked “Are you food or sex?” and her allure is referred to in terms of “Who wants sour milk when you can get fresh meat?” The Neon Demon looks as if it is going a very specific way prior to the third act’s overkill, that Elle will wrest the mantle of vehement bitch from those she threatened and who despise her; instead, the model who can “keep her down” is the one who thrives on plastic surgery, so hollowed out and corrupted that she is readily fuelled/topped up by the raw essence of youth.

Refn has selected his cast eclectically. Elle Fanning (Jesse), replacing a scheduling-conflicted Carey Mulligan, has the kind of detached, porcelain mask of a younger Nicole Kidman, such that her transformation from naïf takes little suspension of disbelief (of course, there’s the question of how much she really is that in the first place, and how much it’s calculated; why are her parents out of the picture, and what are we to make of comments such as “I’m not as helpless as I look” and “I am dangerous”?)

Jena Malone (Ruby), a fantastic actress, essays the sympathetic/predatory guide turned scorned Lady Bathory with aplomb, while Abbey Lee (Sarah) is a revelation as the soulless, synthetic automaton who will do whatever it takes to stay in the game (Lee hails from the catwalk world, so has probably seen a thing or two). If Bella Heathcote is less impactful, that’s the intent of the part. Together, they make three witches (or points on a triangle), luring a Macbeth to her destruction.

And there’s strong support from Keanu Reeves in The Gift mode (Sam Raimi’s one) as a psychopathic hotelier and Alessandro Nivola (Robert Sarno), effortlessly confident as a fashionista who cuts short Karl Gusman’s protestations at being attracted to what’s inside Elle rather than without, although not so much that he’ll consume her (“I think if she wasn’t beautiful, that you wouldn’t even have stopped to look”), and Dexter’s Desmond Harrington (Jack) looking every inch the delusional, coked-up photographer (let’s hope he didn’t go method). There is, of course, a direct link between the adulated movers of the fashion and film worlds, both of whom will have a starlet begging to compromise herself under the banner of art (particularly European-flavoured art).

The star, though, is Refn’s distended, oppressively womb-like world, cosseted by Cliff Martinez’ pulsing score. Natasha Braier’s cinematography is of a piece with Refn’s previous form for intensely saturated hues, indicating that he’s very much leading his collaborators by the hand. Martinez said the first half of the movie was a Valley of the Dolls-style melodrama and the second half a Texas Chainsaw Massacre-style horror. I can certainly see the former, the latter somewhat less so, except in the most obvious narrative cue.

In some respects, it’s closer to The Wicker Man; Jesse becomes an offering, sustenance in maintaining a corrupted system (Sarah’s cachet is revitalised by consumption of her victim’s essence, Jack being struck by her the way he and Sarno were by Jesse earlier), Ruby’s skyclad rites following the burial of their victim (at this point, I considered the picture might be revealing itself as really all about her, but it is much about Sarah, particularly in her responses to the rise of Jesse and how precisely it impugns her own worth).

But going back to the cryptic and occult under- and overtones, there are the references to The Shining (Room 214, red rum, the menstrual tide), the Giger-esque first photo shoot by Jack (at least, it reminded me of his cover for Debbie Harry’s solo album, rather than Baphomet). Mirrors and pyramids, and swastikas, abound, and those who have a field day suggesting Kubrick devoted his career to exposing the Illuminati will surely see The Neon Demon picking up where he left off.

Being one for conspiratorial fare, I was unimpressed by a highly prurient Vigilant Citizen piece on the picture’s possible themes, clearly basing its view of “an indulgent celebration from people who revel in darkness” on its distaste for the content rather than attending to what it’s saying; you’d have to be incredibly blinkered to come away with that message (“It actually attempts to make everything cool, trendy and fashionable”: really? Anyone reacting to it that way is probably is looking to get sectioned. Or go spirit cooking*). It’s mostly that Refn, being an unmalleable, crazy Dane, doesn’t feel the need to lead his narratives by the nose with Hollywood Moral Framing 101. It’s still pretty unmistakable who’s bad here, though.

All of which is well and good, but I must admit I was hoping for something either more off-kilter or more enigmatic. Perhaps Refn’s bluntness shouldn’t have surprised me, but it certainly didn’t altogether satisfy, and is preceded by a section where I began to feel a slight ponderous tone setting up shop. Nevertheless, if you have the stomach, this is a strange, bewitching movie, one that is fascinating and though-provoking for all its flaws. It’s also a strong runner-up to Zoolander 2 in the list of 2016 modelling movies that culminate with diabolical human sacrifices.

*Addendum 21/07/22: But who knows; maybe they’re right. No one watching Refn’s would suggest he’s got all the lights on. And the feeding on youth here retrospectively makes for another apparently overt text, in the light of adrenochrome.

Jay Dyer called The Neon Demon “Mulholland Dr. taken to the next level of depravity, revamped from the rapacious world of Hollywood to high fashion”. He notes many of the salient points concerning symbolism and cannibalism, but also identifies the “Frankfurt school-style depravity which must be cultivated by design to destroy society”. This perhaps is the key to Refn’s work; it doesn’t need to make everything cool, trendy and fashionable – even if the visual sense is doing exactly that – so much as do its bit contributing to the general decline and fall. 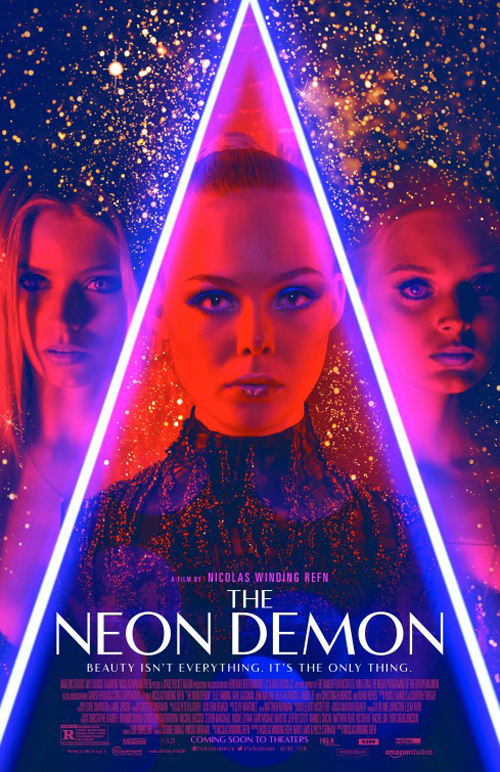