I didn’t dislike Assassin’s Creed. It engaged me, the action worked, by and large, even if director Justin Kurzel is obsessed with high shutter speeds like it’s 1999, and it’s a damn sight better at doing what it’s doing than the empty-headed Macbeth he and Michael Fassbender collaborated on prior to this. I’m just not sure what it isthat it’s doing. Or if it knows either.

I am not, nor have I ever been, a player of the video game(s) on which the movie is based, so I have no investment in its accuracy or departures from the source material, as the case may be. I can, however, point to baggage that doesn’t really work cinematically. While our Fass’s 2016 “incarnation” Cal Lynch’s encounters with a spectre of his fifteenth-century forbear Aguilar are reasonably effective, the intercutting of action sequences in Inquisition-era Spain with Cal going through likewise motions while attached to a futuristic machine/articulated arm (the Animus) mostly don’t, succeeding mainly in detracting from the pacing of the given scene.

That said, I have no particular preference regarding the past/future elements. Assassin’s Creed is saddled with a premise that may serve well enough for a game, where it’s the action that matters, but it instantly feels leaden and clunky translated to the movies. Having Cal physically jumping around might – in the eyes of the makers – provide a visual flourish, distinguishing it from someone lying on a gurney, Matrix-style, while their mind goes a-wandering, but it’s a bit silly, no matter how seriously it’s taken (and it’s taken very seriously).

Added to which, the MacGuffin of finding the Apple of Eden is desperately sub-Dan Brown, which is saying something. Then there’s the convenience with which Cal jumps into Aguilar in linear fashion each time, at the very point he/the nefarious Abstergo Foundation needs to learn or find the next something on the trail of the Apple; it makes the plot progression all too straightforward and effortless. Where’s the challenge? And that’s not even mentioning the crudely-fashioned strand of the Templars’ plan to eliminate violence from the world and/or free will, the kind of nebulous notion that invites ridicule even before Marion Cotillard’s Sophia compares it to Oppenheimer’s achievements.

The idea of an ancestral line informing one’s existence feels like it’s picking up the thread of disguised reincarnation Highlander previously flirted with, just here wrapped in the more palatable finery of pseudo-science. So, like Cloud Atlas, we have a number of the actors playing dual counterparts, the only problem being there’s so little definition to them that they resoundingly fail to distinguish themselves. Ironically, it’s probably Denis Ménochet’s fearsome but insightful heavy who makes the most of his lot, as both the Abstergo head of security and a Templar goon.

I found the picture’s rather eccentric delineations of good guys and bad guys on the distracting side, since I was left trying to work out why those choices were made, while furnished with precious little detail to back them up. The Knights Templar appear to be a free-reigning force during the Spanish Inquisition, despite having been (officially) wiped out almost two centuries earlier. And they’re up against the Hashshashins, also enduring way past their peak.

The Templars here effectively represent the Illuminati (of course, some conspiracists have actually intertwined the two), imposing controls, distractions and constraints on humanity but who, unable to dissuade the global population from nasty, messy violence, wish to utilise the Apple to remove free will from the equation (as such, they’re at least portrayed as having some level of “noble” motivation, rather than simply power for power’s sake, which isn’t very illuminati of them).

The Assassins occupy the polar extreme, citing a Crowley-esque “Nothing is true. Everything is permitted” as their mantra and preserving some less-than-wholly-welded concepts of anarchy and ordered preservation of the status quo (so no using dodgy Apples, then), in order to nurture ideas and the growth of individuality. And, one can only know that one knows nothing.

Perhaps, if the games’ homo sapiens divinus (the dreaded ancient astronauts) had been incorporated, it might have felt like there was more meat on the bones of these barely-sketched opposing factions. It might also have yielded an answer as to why the Apple of Eden resembles a boule, although I doubt that somewhat (the old chestnut of having it located in an ancient tomb is further evidence of how under-cooked this is).

I’m not sure if the idea that the bad guys are trying to wipe out violence from humanity is intended as meta-commentary on gaming culture’s main virtual activity, but since nothing is really made of it, I’m dubious. As for the set-tos in the movie, Kurzel ensures there’s some proficient action choreography, and even occasionally makes sequences dramatically stirring (when he isn’t over-cutting and overworking his shutter), despite singularly failing to invest us in his paper-thin characters. He’s helped along by his brother’s pulsing score.  The various leaps of faith and exercises in medieval parkour are impressive and there’s more than enough tangible action to forgive the evidently virtual cityscapes (and eagles!)

The Fass gives a decent showing in his dual roles, albeit for no discernible thespian and disappointing box office reward, such that his quest to start his own franchise now appears to rest on playing Harry Hole in The Snowman. Marion Cotillard is fine (many have remarked on her erratic accent, but it didn’t disconcert especially me). Jeremy Irons plays a villain in pay-cheque mode (he was much more engagingly sociopathic in High Rise, as rocky as that film was). The likes of Brendan Gleeson, Charlotte Rampling and Michael Kenneth Williams (who smiles occasionally, but that’s it as far as humour in this dour affair is concerned) are duly professional. Ariane Labed sports some stylish face paint and she and Fass rock some snazzy 1492 designer hoodies.

The third act, such as the structure goes, is a bit of a flounder, and even features the Fass leaping upwards through a skylight à la Warren Beatty in Dick Tracy. So Kurzel is borrowing from the best… I was expecting the movie to end with the Apple stolen, cuing up the sequel. So, on the one hand, they commendably offered a degree of closure. On the other, there were another ten minutes added to the running time.

Assassin’s Creed doesn’t deserve the opprobrium heaped on it, but at the same time the negative reaction is entirely understandable. It never makes the effort to inform its audience why they should care about the proceedings or anyone in them (Kurzel said he didn’t want to show the Assassins as heroes and Templars as villains, since both ideologies could go to extremes, but he fails to achieve even that, creating murk of motivation at best). It’s all presented as a fait accompli, which you just can’t do if you’re spending $125m on a movie. Or are Rogue One: A Star Wars Story. So why did I kind of like it, I hear you ask? Damned if I know.

Anyway, it’s fairly clear by now that there won’t be an Assassin’s Creed 2 and that the prospects for a whole franchise are doomed (although, I’ve seen it said that UbiSoft took most of the hit, so that they could follow it up, irrespective of performance – that remains to be seen). Welcome to the world of video game adaptations that aren’t Resident Evil. 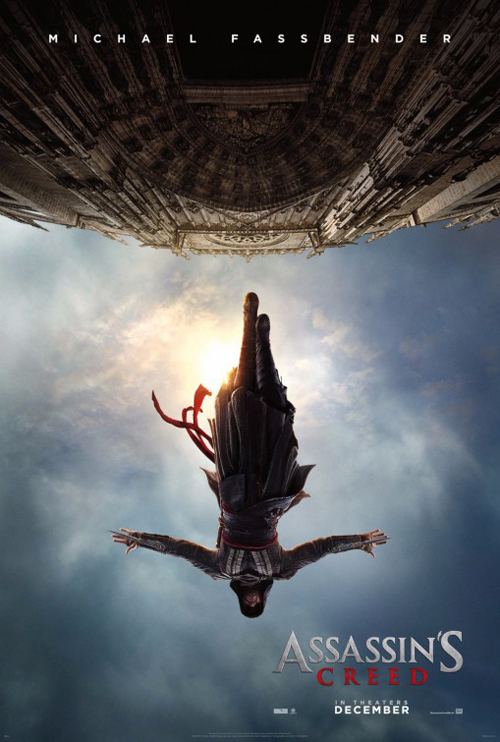