Maybe it’s appropriate that, amid audience ambivalence in the face of Rogue One: A Star Wars Story and semi-outraged critical dismissal, Passengers has been rather overlooked. After all, Morten Tyldum’s previous picture, The Imitation Game, was vastly overrated, and over-feted, a psychologically thin and dramatically crude telling of Alan Turing’s life and work that needs to be compared to a truly barrel-scraping biographical portrait like A Beautiful Mind to come off looking remotely praiseworthy.

Here, Tydlum exhibits a similarly glib understanding of his protagonists, but the premise of Passengers nevertheless holds twisted, unsavoury potential. That it fails to succeed in following through – and so the talking point becomes what might have been, in tandem with the problematic actual content – must ultimately be blamed as much on screenwriter Jon Spaihts as its director. Added to which, its stars haven’t exactly brought everything to the table in suggesting hidden depths and inner lives. But, for about half its running time, Passengers is one of the more interesting big budget spectacles of recent years.

I’d read various attestations during the build-up to release that the script was really good, and consequently the suggestion that it’s in the realisation thereof that Passengers goes awry. But really, I can’t see much scope for the third act developments being other than a heavy-handed attempt by Spaihts to manoeuvre himself out of the blind alley he has brazenly careered into. It’s also my understanding that his earliest drafts were very different in outcome, but the one Tydlum filmed does appear to be the one that received all the plaudits.

Although it has been talked of as such, it isn’t really much of a spoiler that Chris Pratt’s Jim Preston, having been revived from hibernation too soon on a flight to the unexotically named Homestead II (the corporate meeting to pick that catchy little name would have been interesting – or soporific), facing the prospect of ninety years alone, with only Michael Sheen’s legless android bartender Arthur for company, decides to awake J-Law’s Aurora Lane (will you look at that: she’s named after something ungraspable) and, having elected not to come clean that it was him wot dunnit, slowly woo her. Because it’s all front-ended; it pretty much is the premise. The drama comes from his deception and the inevitable repercussions when she finds out.

It’s the very fact of his maladjusted act that makes this a compelling idea, and as such, I think it could have worked. That is, as unappetising as it sounds, the challenge of having Aurora, despite her instincts rightly being that Jim’s act was indefensible, could find herself still wanting to be with him, with the unsettling ramifications that carries on both sides. The Telegraph called it “a creepy ode to manipulation” (as Aurora theatrically accuses Jim at one point, “You murdered me!”) but that unfortunately gives too much credit to the processes the picture fails to engage as its lurches carelessly forward in character motivation. Whereas, an actual creepy ode to manipulation might have been singularly conceived, and would likely have been consistent in making you aware, in Hitchockian fashion, that there was something very awry with the way things were panning out.

But it would require a filmmaker with far more gumption than Tyldum to pull off. Verhoeven maybe. De Palma, definitely. Obviously, a movie doesn’t have to give its characters morally-pleasing compasses to be effective, but it’s usually advisable to have a clear perspective on who they are and where their actions will take them. Passengers ultimately goes out of its way to atone for Jim’s sins, rather than having the guts to follow them to their natural conclusion. As such, Spaihts ought to have very much eschewed the Laurence Fishburne ex machina, whereby he too is woken up and with him the chance for Pratt to prove his heroic mettle, save the 5,000 other passengers and earn Aurora’s undiluted devotion. Although, he already has that by the time he decides to go outside and open a troublesome airlock, and the process by which Aurora concludes she wants to be with him entirely fails to convince (there’s even a means for her to go back to sleep, so she can say “No, I’d rather be with you, you big dopey lummox”).

To be honest, their preceding romance doesn’t very much either. They aren’t exactly a bust together, but neither are Pratt and Lawrence brimming with chemistry. Part of the problem is that neither role plays to their strengths. Pratt is too often a blank, and what should be the furrowed churning of a muddled mind is unfortunately streamlined into a jockish episode (well, year) in which he gets pissed, grows a glue-on beard and develops a chubby for the sleeping blonde chick he happens across. And, when she’s revived, all he can do is look sheepish, or attempt to give off a lost puppy vibe (freeze any Pratt frame from the trailers and marvel at how all his looks look the same; Derek Zoolander would be proud).

I’m not sure Keanu, who was attached at the inception of Spaihts’ idea, would have better conveyed Jim’s dark year of the soul, but I suspect the result would have been more elusive, less disposable. Tyldum doesn’t help Pratt out either; his leading Jim to the brink of oblivion is rudimentary and unconvincing. The director has gone to great lengths to show us the luxury playground that is starship Avalon, but he has no feel for the mental degradation of isolation; it takes more than a Robinson Crusoe beard. If we were to get on board – or at least empathise – with the place Jim arrives at, it would have required some Polanski-esque aberrations of the mind to precede it. As it is, it looks like Pratt just wants to get his jollies and debates the matter over a whisky before succumbing (the passage of time is poorly represented – the beard is shorthand, but doesn’t cut it, so to speak).

On the subject of which, one wonders why, when technology is clearly so advanced, the company doesn’t have a coterie of sexbots on hand to service Pratt’s shallow whims (before you say the poor dope’s looking for connection and meaning, he just happens to fall prone before the pod of a gorgeous, privileged blonde; would he have lingered if she’d been a plane Jane? Added to which, his protestations that she’s funny and smart fail to translate into her being other than J-Law).

Of course, the design of the craft is at once impressive, yet simultaneously as shallow as Tyldum’s insights. This is the post-Apple era science-fiction spaceship of gleaming expanses, where everything consists of touch screens and rudimentary holograms (see also the Star Trek reboot’s bridge); are we really supposed to believe the dancefloor’s virtual stars are state-of-the-art, when they’d look iffy on your average video game now (or is that the point? It’s a naff, retro-‘00s experience)? The undemanding nature of the design work (which isn’t to say it’s aesthetically displeasing: it’s just too easy) extends to the eventual detour to the engine room, which naturally is a Blade Runner-derivative, claustrophobic inferno.

Like Rogue One, the most successfully achieved aspects of Passengers are the overtly artificial. When it nods to Silent Running too much (Jim planting a tree, for example), it simply reminds you of how much better that picture is on every level (not least in depicting the desperate mental breakdown of its protagonist; but then, it did have Bruce Dern going for it), but kind-of referential aspects such as the cleaning bots are amusing and well rendered, slavishly picking up messes made by their human masters. And Sheen is just great as Arthur. He should take more genre roles (he was similarly memorable in TRON Legacy). Arthur’s limited logic is both endearing and frustrating, and seems far more clearly formulated than any other aspect of the screenplay, such that, while you can see his crucial part in unravelling Jim’s deceit coming a mile off, it’s no less successful for that.

Lawrence is merely adequate, in a role that’s the closest she’s come to eye candy thus far (which came first, the swimsuit or the zero-G pool?). Which is to say, it offers her little in the way of meat, even of the processed variety David O Russell was feeding her in Joy. She’s at her best when she has a battle to wage, but here she’s on a back foot, the subject of the lead’s projections for the first part, given an unconvincing background of status and journalistic ambition that seems to call for someone a decade older (yes, it’s the Russell “casting her too far beyond her years” thing again), and required to stand by while Pratt proves he’s not one in the finale.

She’s further undermined by coming round to Jim in no time at all, making Aurora’s processes seem as shallow as her literary pedigree. In that sense, the couple do seem made for each other. If Aurora had been given an equal aptitude for darker manifestations as Jim (even if it was simply – in keeping with one of the movie’s themes – a calculated, manipulative, “make the most of what you’ve got”, so unreciprocatingly using the doting shmo), or the path to forgiving him had been etched out astutely (because, despite what he did, she does still want him), aware of the implications, something might have clicked. But, as it is, the Keanu-Emily Blunt/ Reece Witherspoon/ Rachel McAdams pairing couldn’t have elicited less resonant results.

Like Rogue One, Passengers’ lead characters have expired come the final shot, which is something of a Garden of Eden minus Adam and Eve (so again evoking Silent Running) and with an added, big, bushy, Andy Garcia space beard; I was half-expecting the duo to ease their loneliness by propagating, but they evidently decided that wouldn’t be best for the kids (apparently, this was an element of the original draft, complete with incest and the jettisoning into space of the rest of the passengers). No ropey aging prosthetics are applied here; Chris and Jennifer are preserved in all their youthful glory, absent any lingering final decrepitude. It’s that kind of veneer that points up the picture’s main failings. There’s much more potential to Passengers than in the sketchy, joined-up backstory of the current Star Wars story, making its squandering that much more disappointing. And yet, even given that, this is an interesting and blithely provocative failure, and they’re often more rewarding than the sure-fire hits. 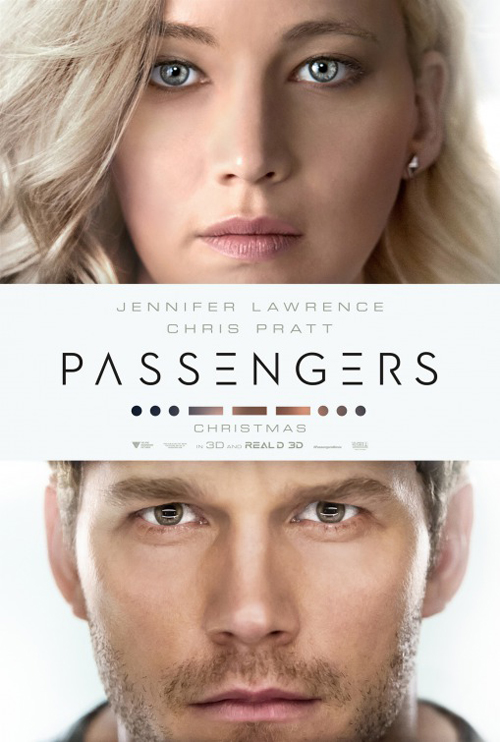