Show me the chickens, Max.

Just what is it that attracts Robert Zemeckis to a movie? Now that his prospects for creating entirely unasked for virtual landscapes have decisively dimmed, that is? The chance to work with accomplished, Oscar-winning or nominated actors on distinguished screenplays delving into intricate and rewarding subject matter? Or the opportunity to ransack the material, seeking some kernel or glimmer of a reason to justify further elaborate experimentation with some new technical trickery he has set his sights on this time? Yes, it’s the latter. Allied is a Notorious-esque WWII tale of romantically-entangled spies and the suspicions that arise, not so much of fidelity as loyalty to the winning side. Or, it’s the chance to give Brad a full virtual chemical peel, and roll those decades right off him, the odd unflatteringly turkey neck aside.

This CGI facial wash becomes the raison d’être of Allied (daring you not to find its content as unequivocally dull as its title), so if you’re keen to watch Brad in a not-quite uncanny valley state, but undeniably so very rather off, this will be right up your street. Otherwise, you will most likely find yourself left wanting. Zemeckis is working with less hyperbolic budgets these days, but they still afford him the chance to dabble in his preferred composite worlds, to as varying degrees of effectiveness as ever (honestly, his best work with effects remains his ‘80s output, when he wasn’t trying so hard).

Marvel at the manner in which Brad apparently lands his fighter plane and climbs out of it all in one shot (it’s that kind of thing you’ll probably find was the clincher in Zemeckis deciding to direct the picture)! Similar, less-than-profound, motivations likely went into his decision to make The Walk (the plot is redundant thanks to the superior documentary, but just check out those vertiginous ambulatory exploits) and Flight (another plane crash, following Cast Away – oh, goodie!) And so, looking back on his career, similarly perfunctory, unadorned logic dictates his choices, post-Back to the Future; Who Framed Roger Rabbit (combine animation and live action), Death Becomes Her (unleash T2-standard CGI on a black comedy), Forrest Gump (Zelig-style interpolating of the lead character with news reel footage), Contact (more of the same, and the chance to do a 2001 trip sequence) and the challenge of making a whole movie while taking a break for Tom Hanks to get skinny (Cast Away and What Lies Beneath). Which brings us to his performance capture, decade-long pit.

So, if you’re trying to work out what Allied is about, scratching your head but to no avail, that’s what it’s about. You might have spent much of your viewing time hoping to be seduced and captivated by the romance between Brad’s Canadian Intelligence Wing Commander Max Vatan and Marion Cotillard’s French resistance fighter Marianne Beausejour, but to no avail. Brad’s playing elusive and Marion coquettish, and nary a tremulous spark is curried betwixt them.

Suddenly, they’re in the throes of passion and married and, Bob’s yer uncle, suspicion of Marianne’s true identity and allegiances is announced. At which point, you’re hopefully thoroughly invested in them being together and wishing it wasn’t true. But the fatal problem besetting Zemeckis’ movie, beyond even that it mistakes sluggish for elegant pacing (Zemeckis at his best is a master popcorn movie maker, but he’s not a debonair one, not in the sense of mustering élan and glamour; such gestures feel manufactured in his molten hands), is that you don’t care.

More than that, the problem is one of Steven Knight’s screenplay. He has written some corkers in the past (Eastern Promises, Locke), but here the structure never allows for empathy or investment. Cotillard is distant throughout (though more vital in her performance than the pixel-personified Brad), and so there’s no real power to her final sacrifice, or even her betrayal; this hasn’t been established as a game of cat and mouse from the start, à la Joe Esterhaz’s steamy thrillers (of which Jagged Edge is the exemplar), so when Max is ushered to the SOE basement, assuming a promotion is in the offing, it’s not so much a left turn as one that means others are doing all the donkey work.

And his resultant attempts to clarify matters, most notably during an excursion to France where he gets to “heroically” blow some shit up (and Zemeckis gets that fighter shot in), might be regarded as exposing his ineptitude (it follows his getting a pilot killed and sees him recklessly pursuing his own agenda, so demolishing the Bond super-spy myth) but is all ultimately on a hiding to nothing.

Which isn’t to say Knight and Zemeckis don’t occasionally score. The opening in Casablanca, chock full of Nazis sporting exotic uniform variants (a cossie for every country), makes the most of its Canary Islands shoot, and if the relationship lacks something, there’s the occasional burst of action to compensate as Max strangles a Hun in a phone booth and he and Marianne mow down their targets at a party (I don’t know about Marianne’s suggestion that actual French people wouldn’t be fooled by Brad’s French accent, though; how about just actual people?) These scenes suggest that, if Zemeckis would only get off his lauded perch and have some fun, he could make something as unapologetic as his ‘80s fare, complete with Spielbergian cartoon Nazis. Apart from that, though, commendably, the decision not to pull punches as to Marianne’s identity is at least something.

Simon McBurney, who’s making something of a supporting player name for himself as a spymaster, has a first-class scene deep in a London basement as the Special Operations Executive man with bad news, and Matthew Goode scores as Max’s disfigured one-time colleague, abandoned in a nursing home. Jared Harris is also entirely formidable as Max’s superior, and Mike Leigh’s missus, Marion Bailey, walks off with the loathsome Nazi agent garland for her one scene standoff with Brad; Brad may bring the bullet, but she wins the acting award (that said, Anton Lesser barely registers in a comparable role, and his demise is off screen).

Other choices just seem odd, such as staging a party during an air raid, with apparent ambivalence towards the blackout. And the attempt at poetic panache as Marianne gives birth during another air raid falls entirely flat. Then there’s everyone seeming to be on drugs, which is all the rage in WWII lore of late, it seems (see Blitzed, on Hitler’s mashed Third Reich). With that and lesbians flaunting themselves freely, it’s amazing what an unfettered and tolerant era the war was. No wonder people get nostalgic for it.

Of which, what is with WWII being in vogue again? And particularly with Brad leading the charge (Inglorious Basterds, Fury, Allied). We’ve got Dunkirk coming up, and the recently announced Atlantic Wall with Bradley Cooper (fast becoming a facsimile of himself). Perhaps Hollywood is laying the foundations for encouraging an appreciative attitude toward a forthcoming conflict (if Russia’s out, maybe China will do), one that can be viewed as a similarly “just” war, and prep us with a host of ready material? Or it could just be the usual warped barometer, that knowing these movies can do well, they’ll keep on trying until they hit a sporadic, occasional jackpot.

Allied didn’t come cheap (enough), and its failure adds to the stack of Paramount underachievers this year. Brad might wring another ten years of “youthful” stardom by having his features doctored each movie, but only if he picks his projects more judiciously. This has about as much cachet as the majority of failed star epic romance pictures, proving how difficult a genre it is to get right. Brad’s oft compared to Robert Redford, and he too came a cropper with such fare occasionally. Allied might be Pitt’s Havana. 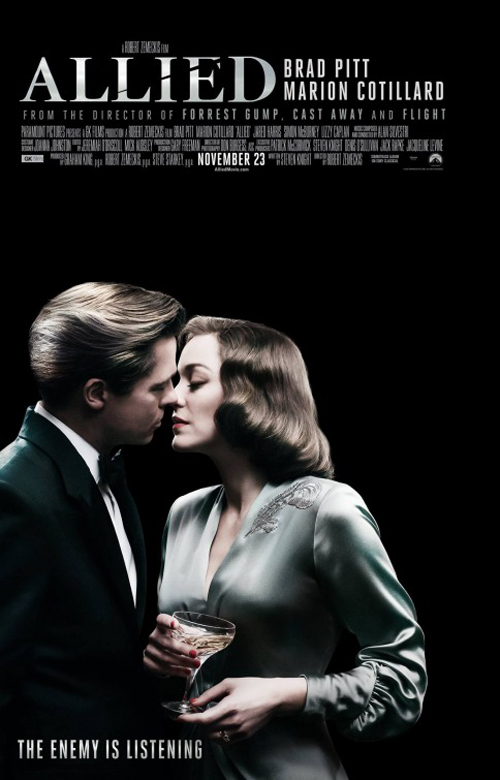