The Avengers
3.19: The Wringer

A first-rate little screws tightener, as Steed not only comes under suspicion but is also found guilty of treason. He’s accused of exposing the Carinthia pipeline (a route for spies on the Austro-Hungarian border), leading to the deaths of six agents. While The Wringer is guilty of a sin common in the series – having the villains discuss their plan and reveal themselves early on, when there might be more to gain from keeping motives and machinations unclear – there’s much to enjoy here, including Steed coming under full-on psychotropic conditioning and a marvellously deranged performance from Terence Lodge (as the titular character).

Charles: The disposal of agents who have outlived their usefulness is not a matter we concern ourselves with – very closely.

Paul Whitsun-Jones returns for the second and final time as Steed’s boss Charles, and he’s entirely lacking in endearing qualities, particularly since he’s so quick to find our hero guilty and have him sent to his death, merely on the say-so of Anderson (Peter Sallis; Wallace, of course, some dreadful long-running comedy about hurtling down hills in bath tubs, and Penley in The Ice Warriors). Who has been conditioned by the Wringer and his off-message associates at the organisation’s now-rogue highland interrogation centre.

The Wringer: Time is what you care to make it, baby. Reality is merely a causal affair; we all know that. In reality, there is only the void.

Lodge (three roles in Doctor Who – two of them directed by producer Barry Letts who plays Oliver here – most notably as Moss in Planet of the Spiders) was memorable but a little erratic in the opening scene of Man with Two Shadows, required to switch multiple personalities over the stretch a few minutes. Here, though, he’s in full flow, relishing the chance to dive into a sinisterly enthusiastic beatnik operative with a penchant for hipster patois and mind expansion, questioning the nature of reality, dropping Wittgenstein into conversation, inducing his only little MKUltra, and crowing that “We could go on forever. No one in the service trusts each other”.

The Wringer: Don’t mistake appearances for the reality, baby.

Sallis is also very good, as a man who has lost his memory in resistance to the implanted lie of Steed being a traitor; Steed refers to Anderson as reliable, although he shouldn’t be, since he’s lousy shot and can’t swim. Also on hand is Gerald Sim (the Rector from To the Manor Born as well as four other Avengers appearances, including one in The New Avengers).

We’ve had Steed come under suspicion earlier this season in The Nutshell, and Martin Woodhouse’s teleplay wisely doesn’t labour the interrogation side. Rather, it’s a case of Steed being assaulted by sound and vision recordings, including familiarly psychonautically swirling concentric patterns, lapping waves, explosive assaults, and manifest darkness accompanied by sinister pulsating sounds.

If there’s a weakness, it’s that Cathy infiltrates and springs him remarkably easily (albeit she gets shot in the arm, and they come up through a convincing storm drain set). It’s nice to see her righteous defence of Steed, however (“If there’s any clearing up to be done, I suggest it’s on your side” and asked where Steed is, she rebukes “I imagine he’s doing your job for you”).

A memorable ending too (well, aside from the subsequent business of Cathy struggling to pour tea), as the clearly unhinged Wringer is unapologetic for his behaviour, repeating the mantra “Question of time, isn’t it? Question of time, it’s all a question of time”. One of the best of the season. 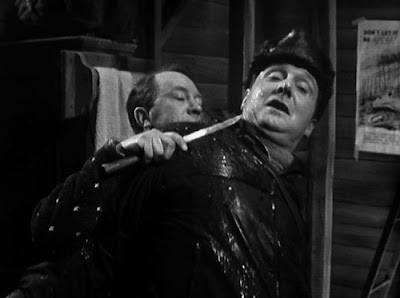 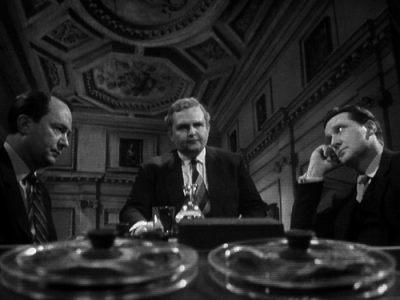 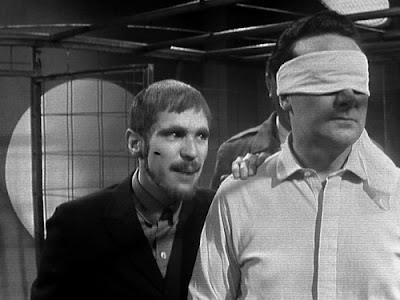 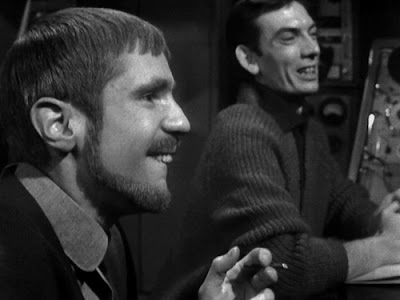 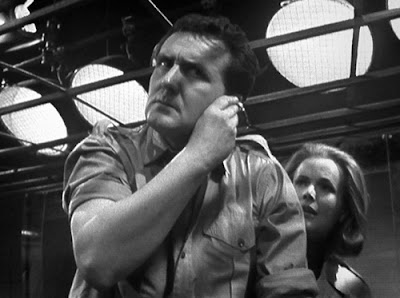